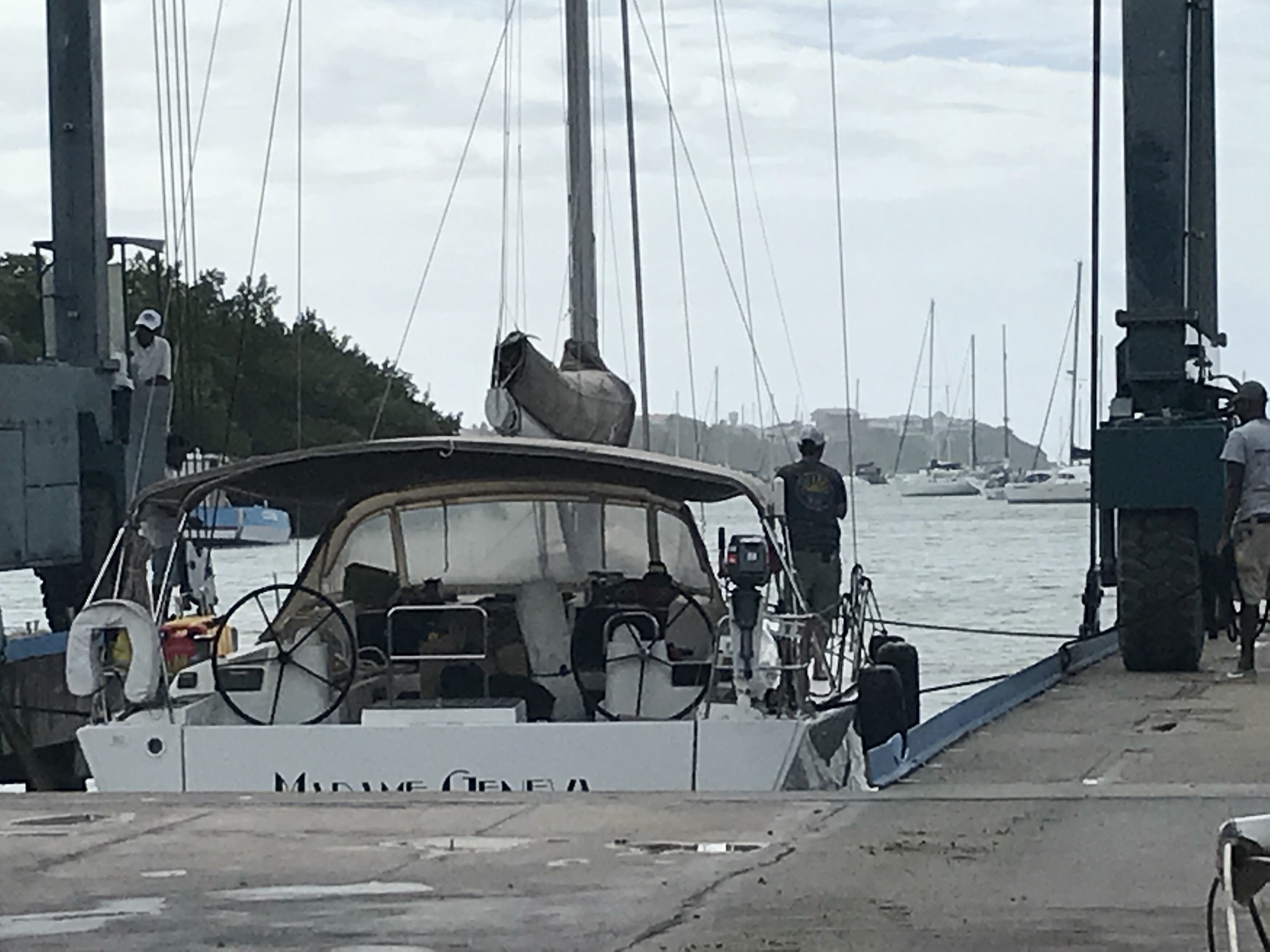 At last, Madame Geneva has found her way to the water and we have found ourselves on board. Now those of you who have never had a boat on the hard may not know that this is not a seamless transition.  The boat does not just roll its way to the water and splash, and the crew does not just kick their flipflops, hop on board and go yachting.  Scenes from our splash were more like this:

Justin and I awoke on Tuesday afternoon, the day of the splash, to a masterful storm.  The winds were blowing the rain sideways in the predawn.  Our cardboard boxes of schoolbooks, our bags of lovies, and our backpacks of laptops and e-readers framed the exit from the three-bedroom condo where we had been staying, since leaving the one room hotel after the first seven days of waiting on the splash.  At seventeen days on the island without being afloat, we were so ready that we simply laughed at the weather.  We would manage, but we needn’t.  The rain passed, the air turned an eerie yellow, and slowly the sun made its made into the brilliance of a blue sky.

The kids were equally excited.  Hot tea, bagels and a quick departure caused not one foul remark.  We loaded the car, hugged our gracious host, and made it to the boatyard by 7:45.  Che, Gherty, and Quinn made their way to the large dining porch overlooking the bay, where they set up to read and exchange emails while Justin and I did what needed to be done to get Madame Geneva from her slender slot to the lift where she would be lowered into the water for the first time in nearly eight months.  This boat life lends to many incidents of ‘how the hell are we/they going to do that?!’ and this morning was no exception.

In this case, pictures do indeed say more than words so consider this more of a caption:  The 26 gross tons were resting on jack stands.  A hydraulic lift stood ready to drive under Madame Geneva, only the jack stand at the bow had to be removed and all of the other triangular stands had to be spun so the weight was no longer on three legs but rather two.  The confidence of the boatyard crew was simply astonishing; they walked under the grand vessel, making adjustments of precarious balance.  I told Justin that I could not watch but he made me. 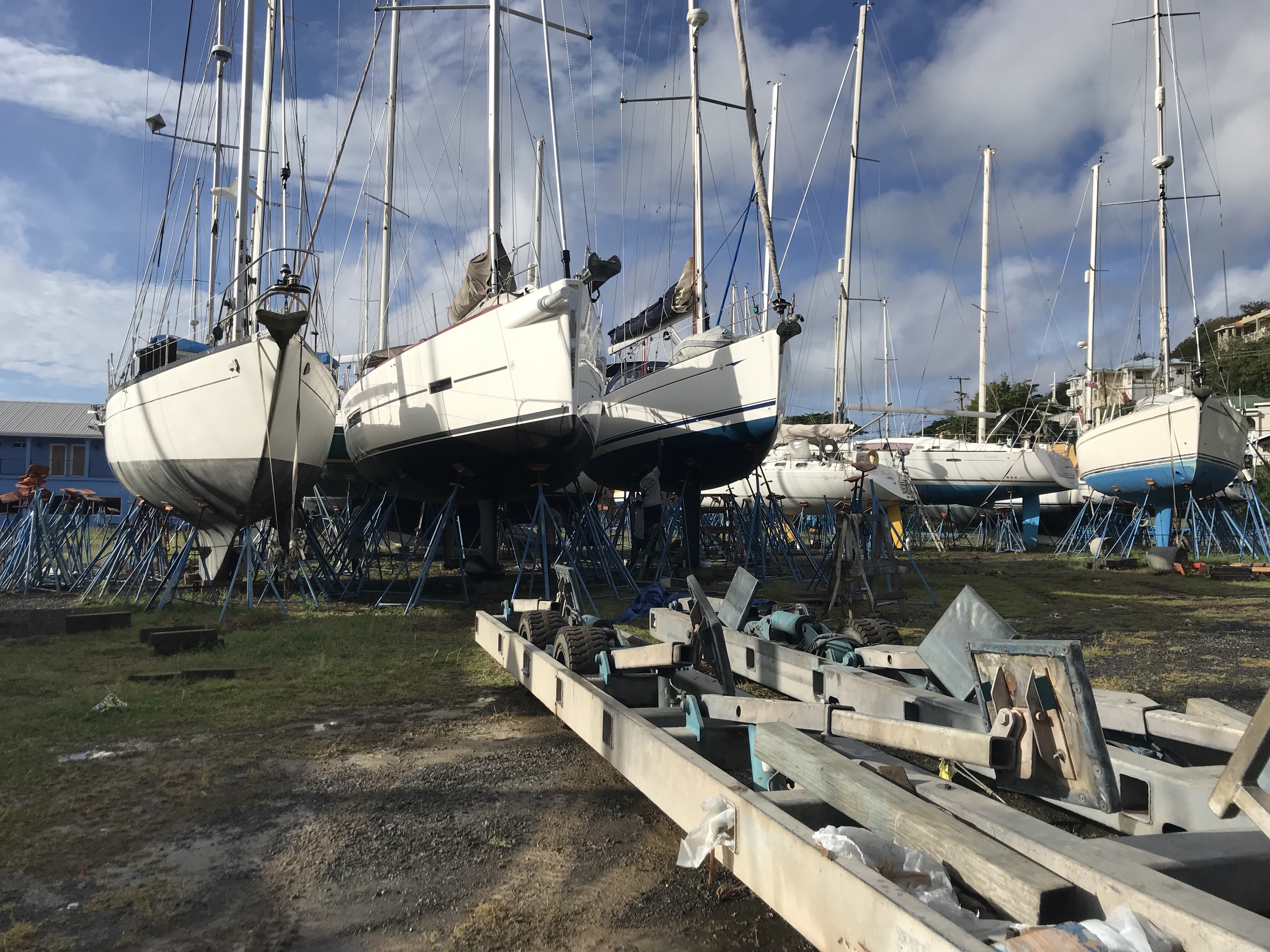 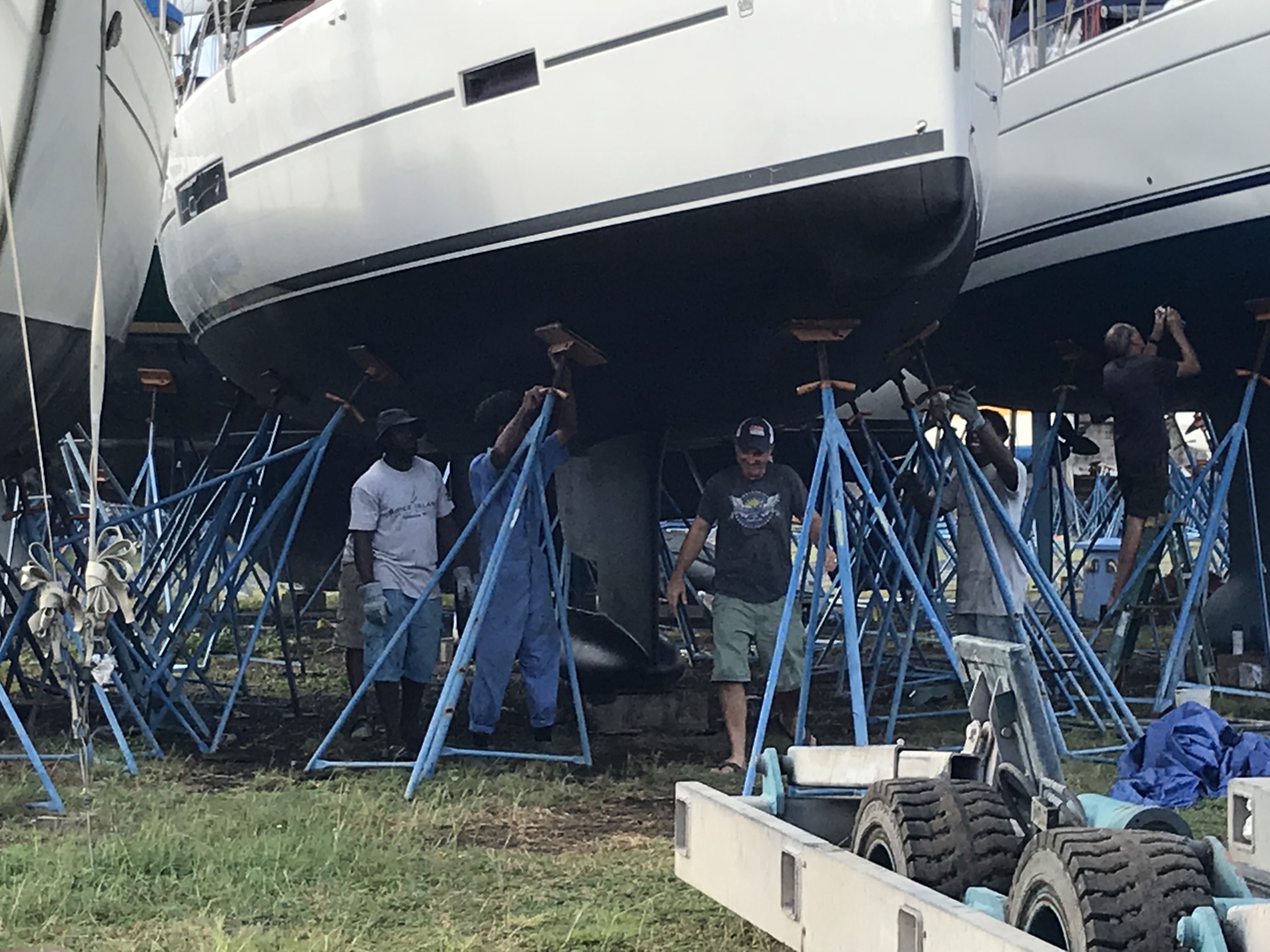 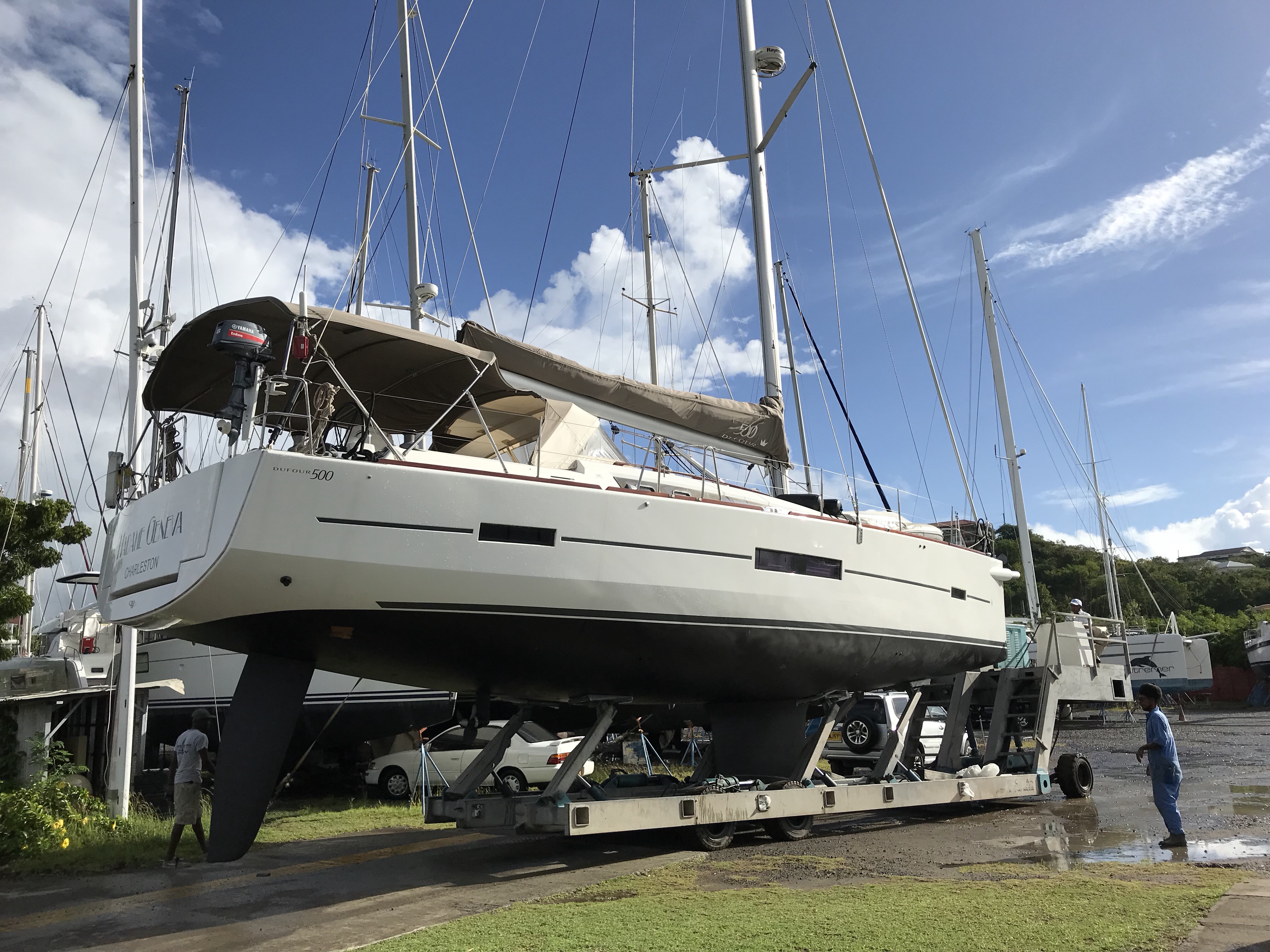 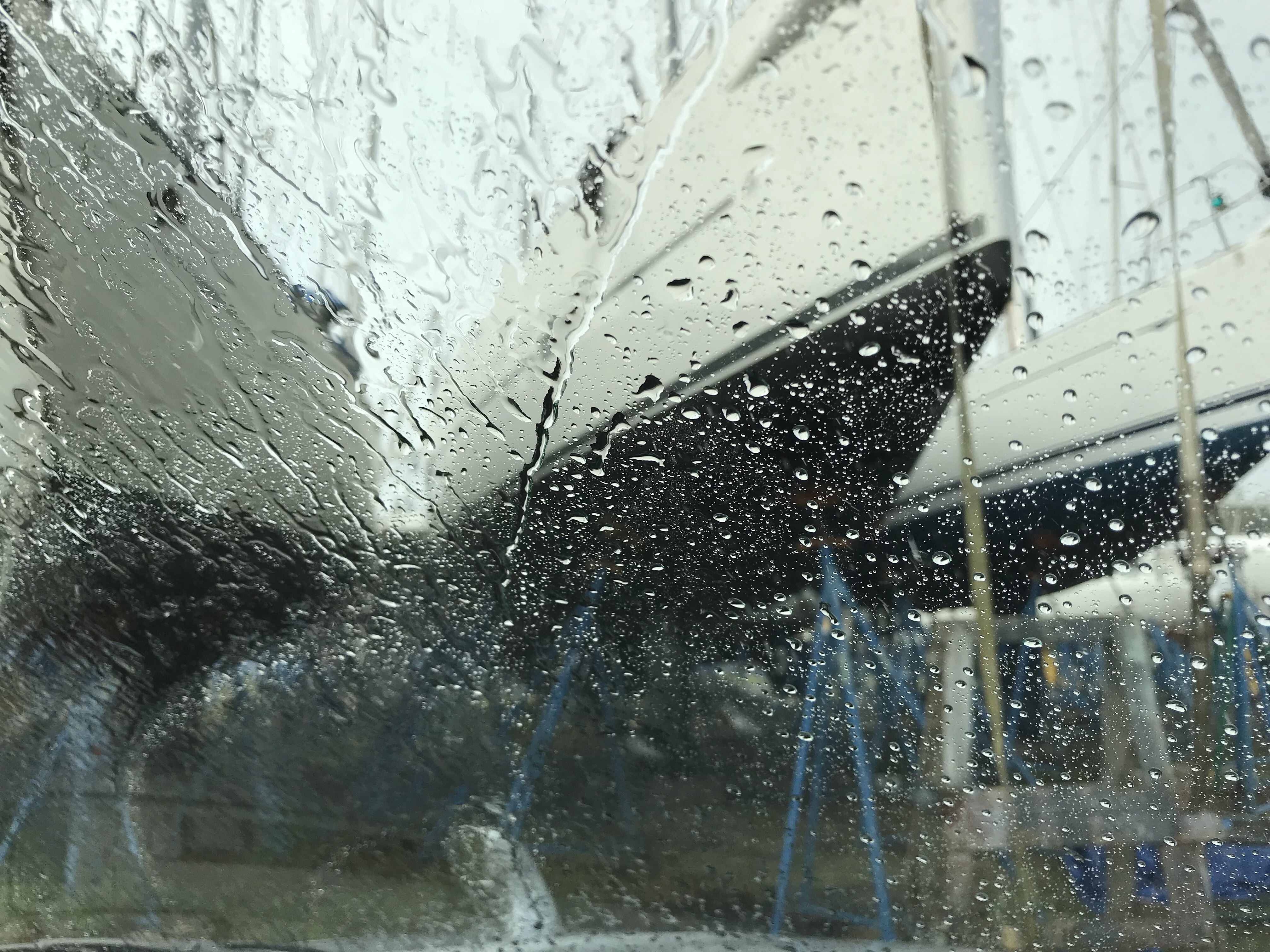 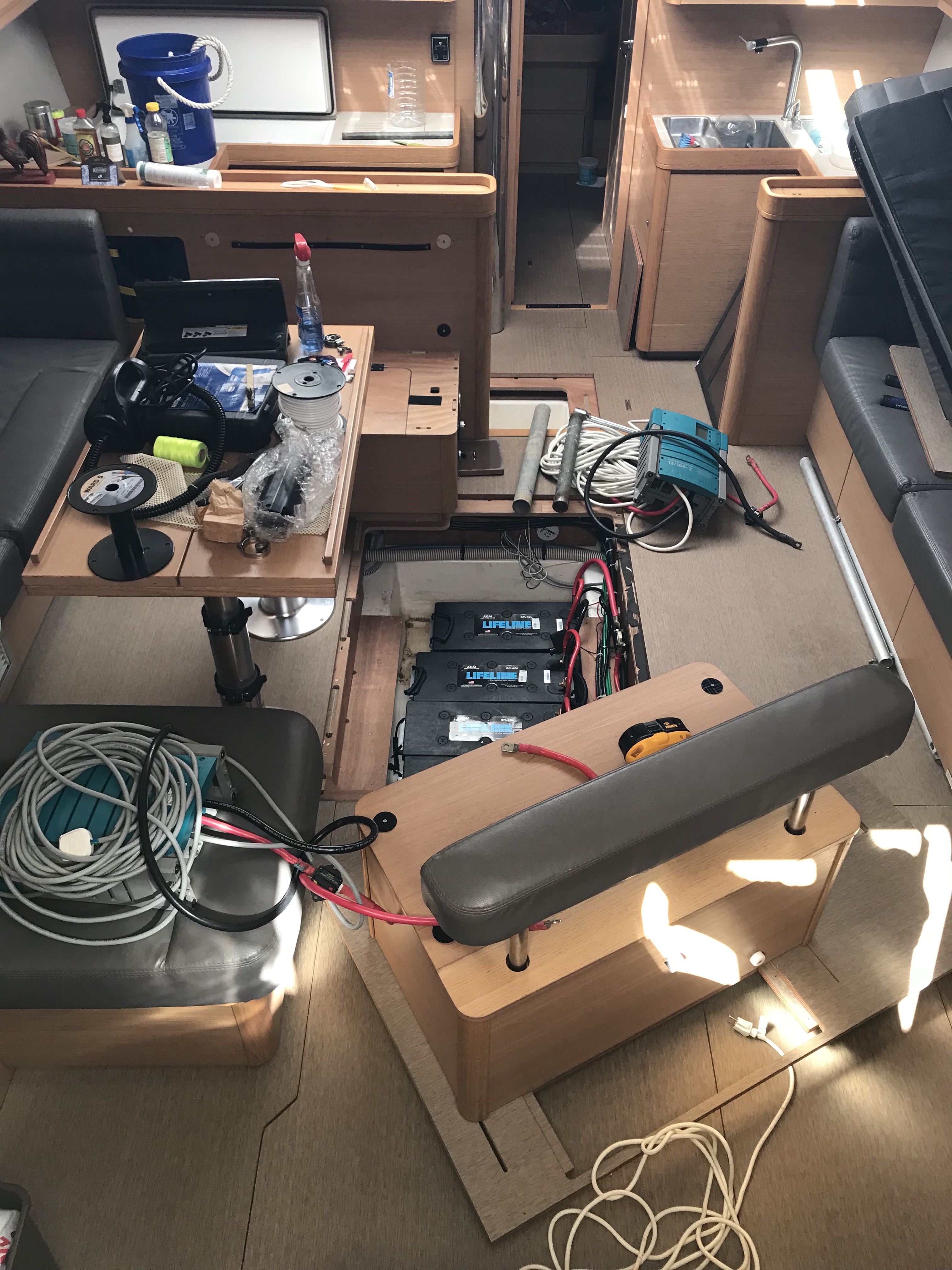 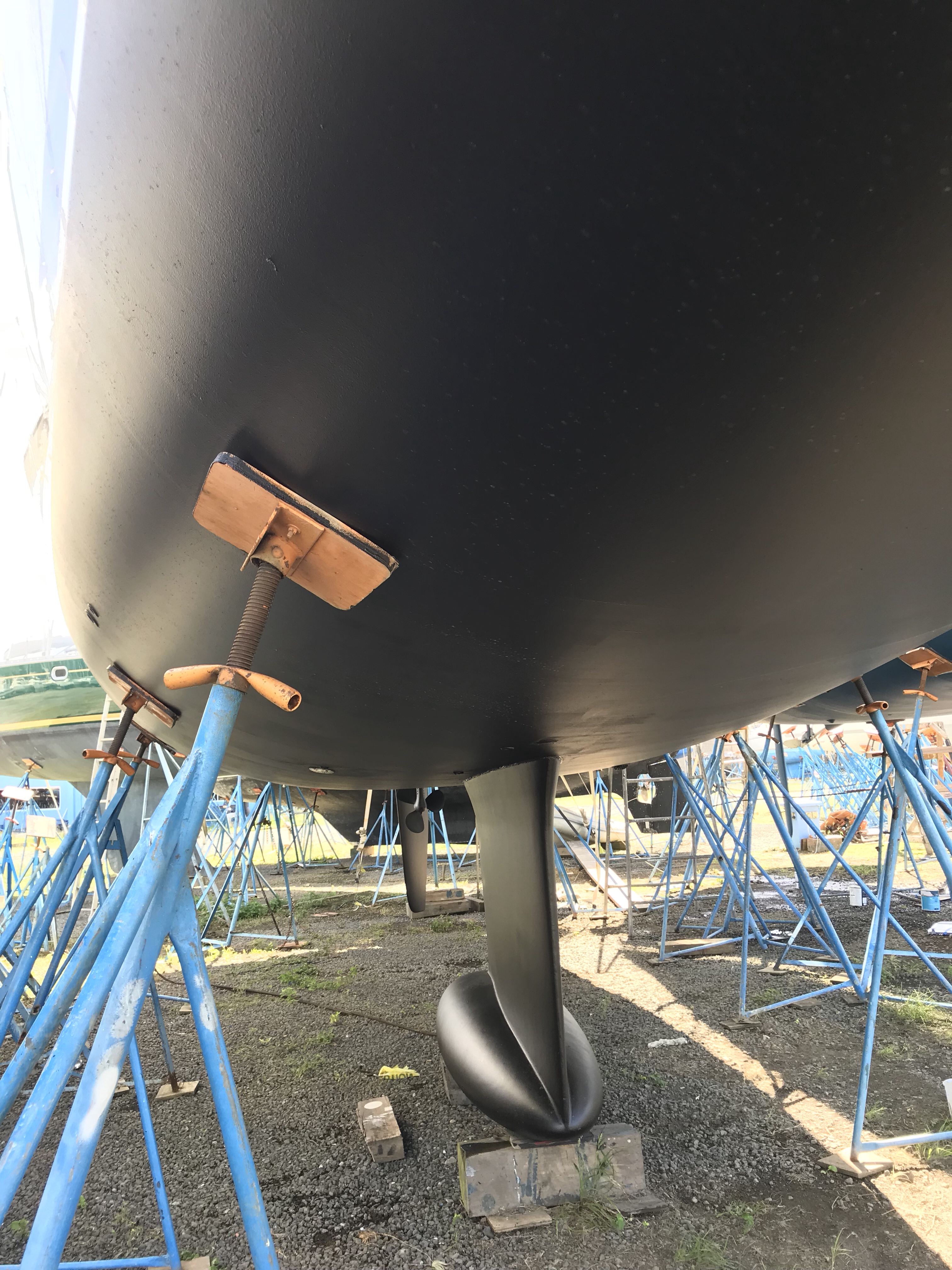 The plan was to have the electric finished up once MG was in the water and we ‘swung’ her around alongside on the outside of the travel lift we’ll. The water here was shallow (some may even say too shallow) and the distance between the rickety wooden dock and the rusted steel piling narrow.  We put a lot of faith into the bow thruster cover syncing with the extrusion and retraction and even more with the engine that just started after such a sleep.  The calm (and tall, handsome and just generally all around great guy) captain didn’t panic when the transmission didn’t engage while switching into reverse.  He managed and we tied up. 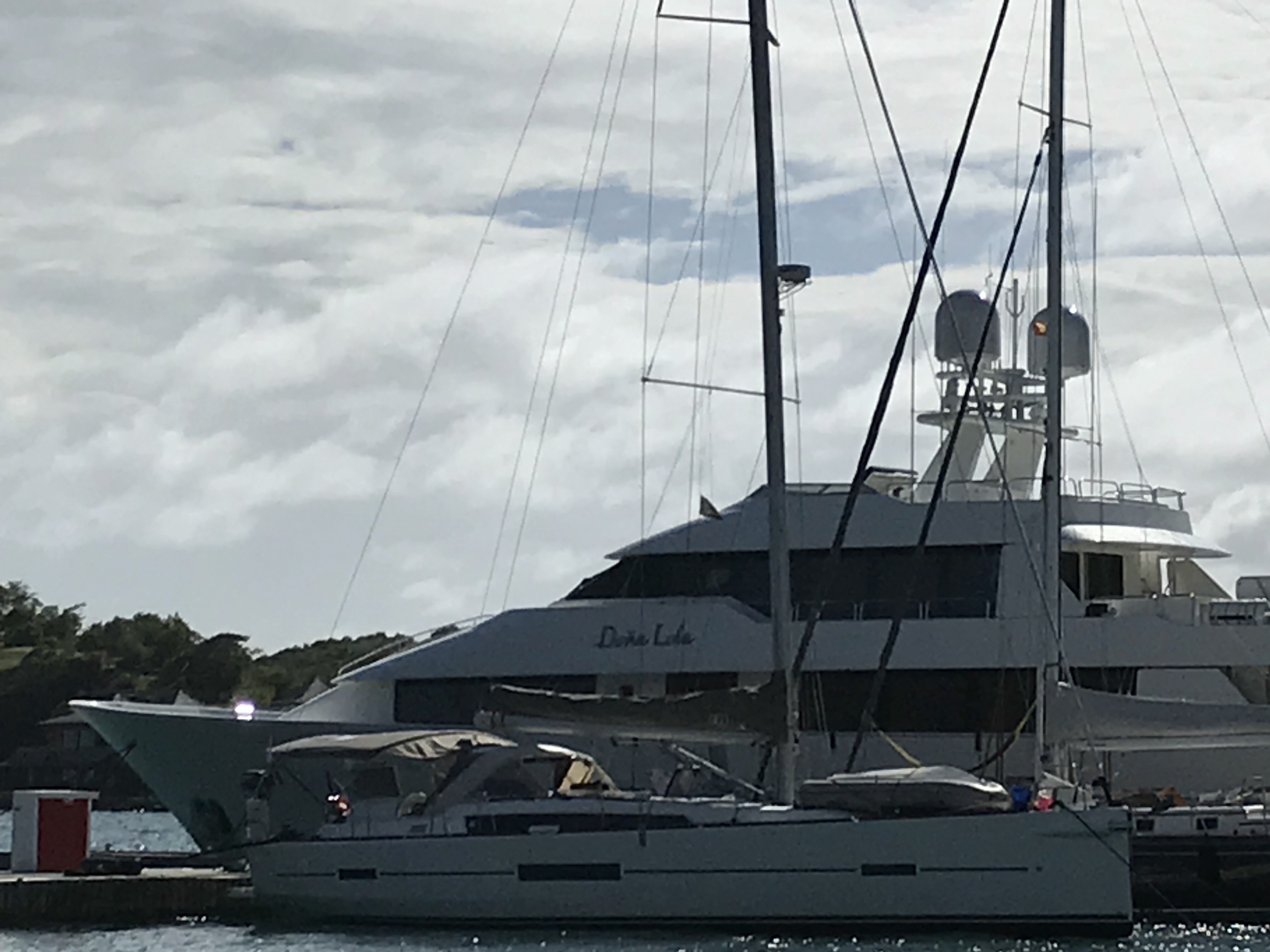 The boat was still a mess.  The floor boards were up.  Three electricians came on board and after their lunch break, when they were still not finished, their boss suggested they take the ride with us.  So out to sea we went!  We stowed as best we could for safety.  At first, one of the electricians stayed below with the intention of working in the bilge, but as we turned into the trades and thumped our way through the oncoming waves, I suggested he come into the cockpit.  Quinn and I traveled forward of the mast, joined shortly after by Che.  The spray of the water, the anticipation of the next wave, and the continual search for sea life made for an incredible, if not short, journey to Le Phare Bleu.

The electrical work continued on Madame Geneva far into the evening, so we made ourselves scarce and explored the grounds, the pool, and the bar.  When they were done, we were left with shore power (for which we were extremely thankful) and a great mess.  We cleared and cleaned the salon so that the kids could camp there in the cool cabin, and made what we could of our berth.  We slept the sleep many envy and for which we long, long awaited.

The next days found me in rather a focus.   We had discovered droppings and spotted a few bugs.  I grew up in a monochromatic town with the firm believe that mankind and bugs cannot and shall not cohabitate.  I am fine with bugs in nature, but simply not around me when I am eating or sleeping.  The fight was on.  The stem to stern approach was obsessive, yes.  Everything was removed, areas were all thoroughly vacuumed, and cleaned with pine sol.  Boric acid was placed in discreet but ample places.  And slowly, kids were granted access to berths after being told repeatedly “Don’t touch that!” and “Don’t go in there!”  At this time, we are down to just the utility room and the bilge but we will tackle those this weekend. (Captains note: I saw a total of 3 bugs. Some things you must just let happen!)

All the while, we are homeschooling and working.  I was writing and dictating an email to one of my coworkers that went like this:  I don’t see an attachment but basically I need the report do not walk on that shit shit shit shit shit I was trying to get on the line and I wine everywhere I need I need like a bucket of water… 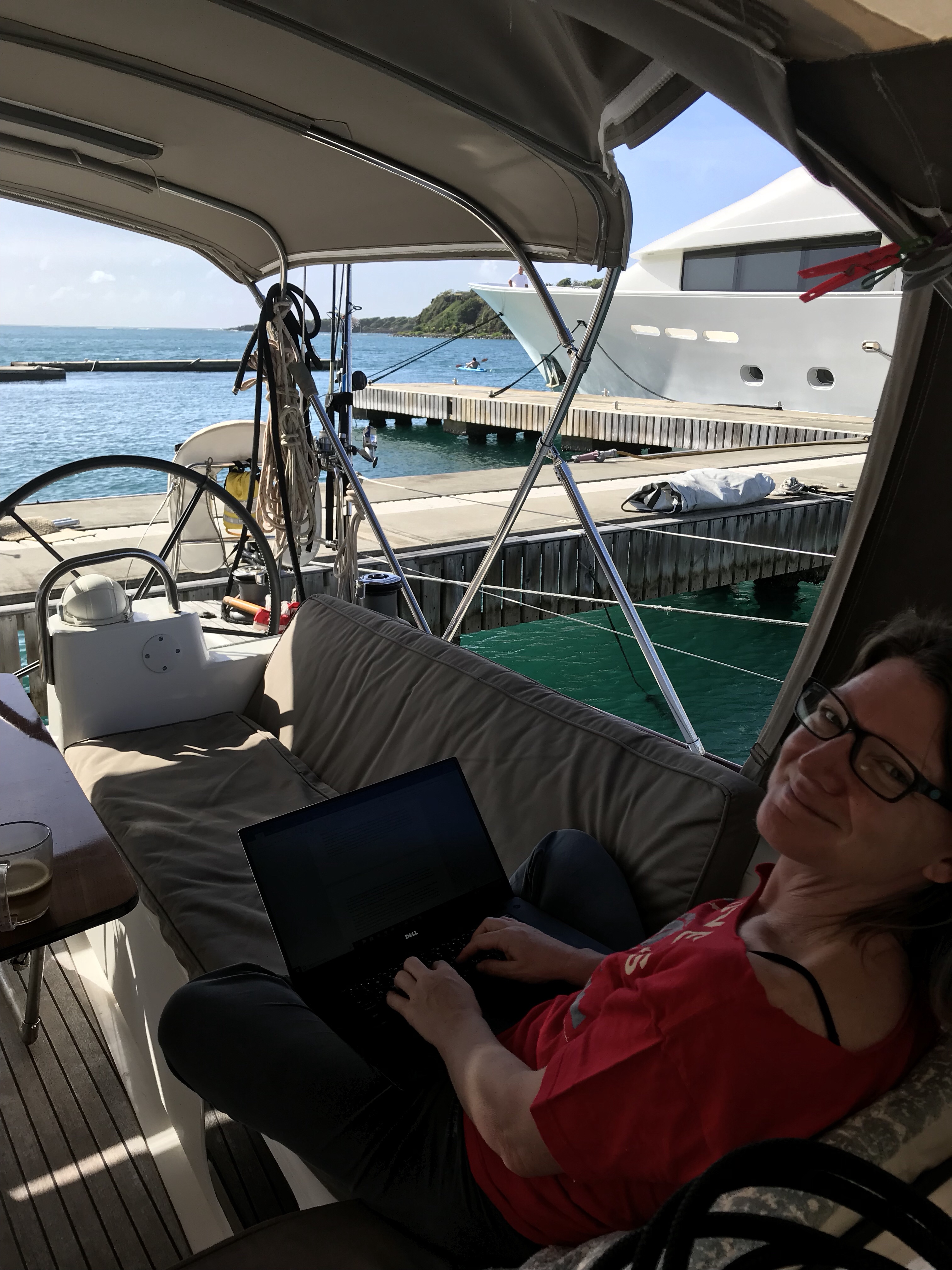 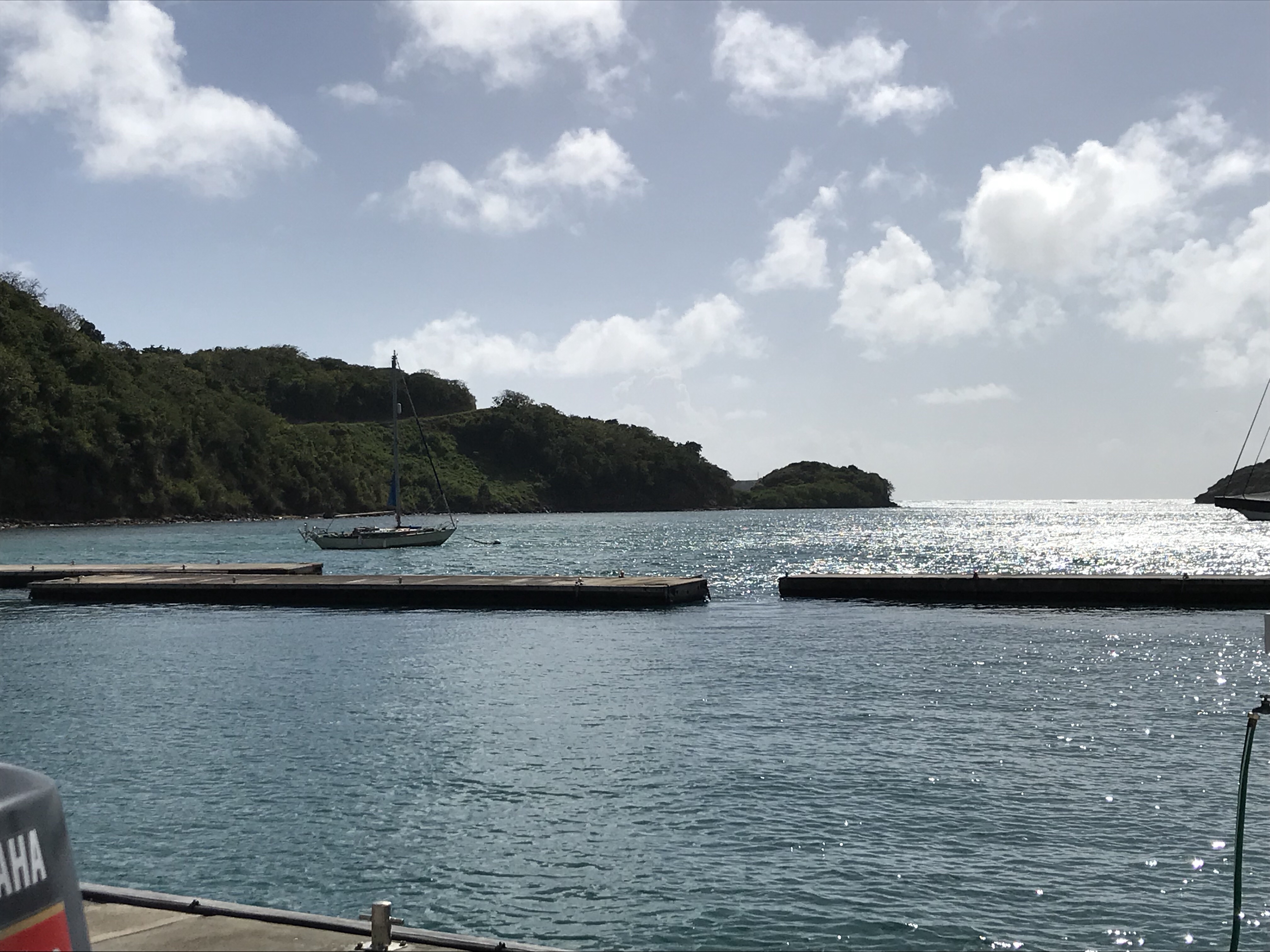 And now with the gentle sway of water below, and the teasing breeze on this late morning, Justin has creatively troubleshot the generator.  Did I mention he is tall and handsome?  Our list of finetuning is shortening and soon we will be able to part for our travels north.  Current plan of departure is Tuesday though we are still reliant of some Grenada time…so that time will tell.

In the meanwhile, while weren’t on vacation… 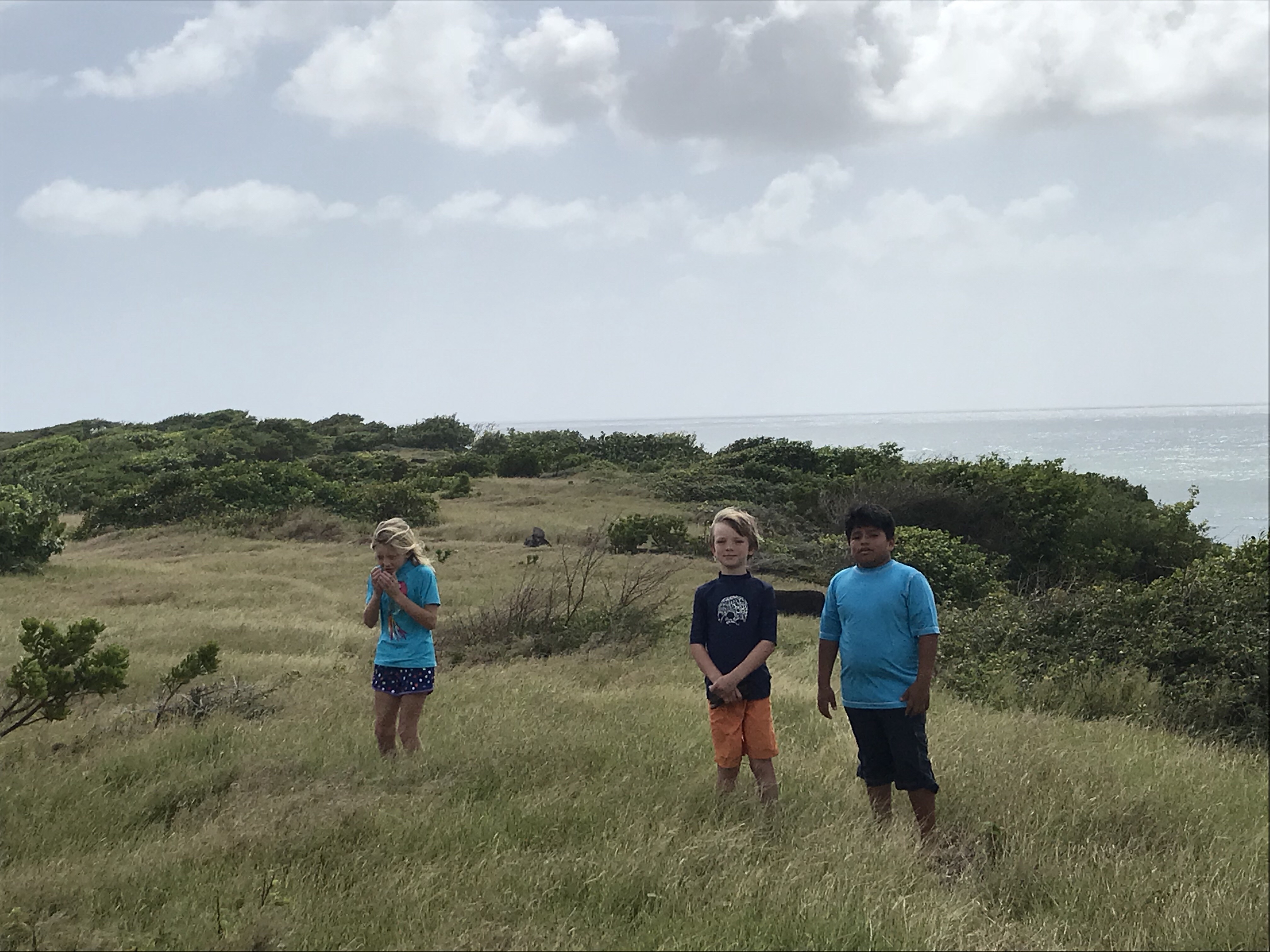 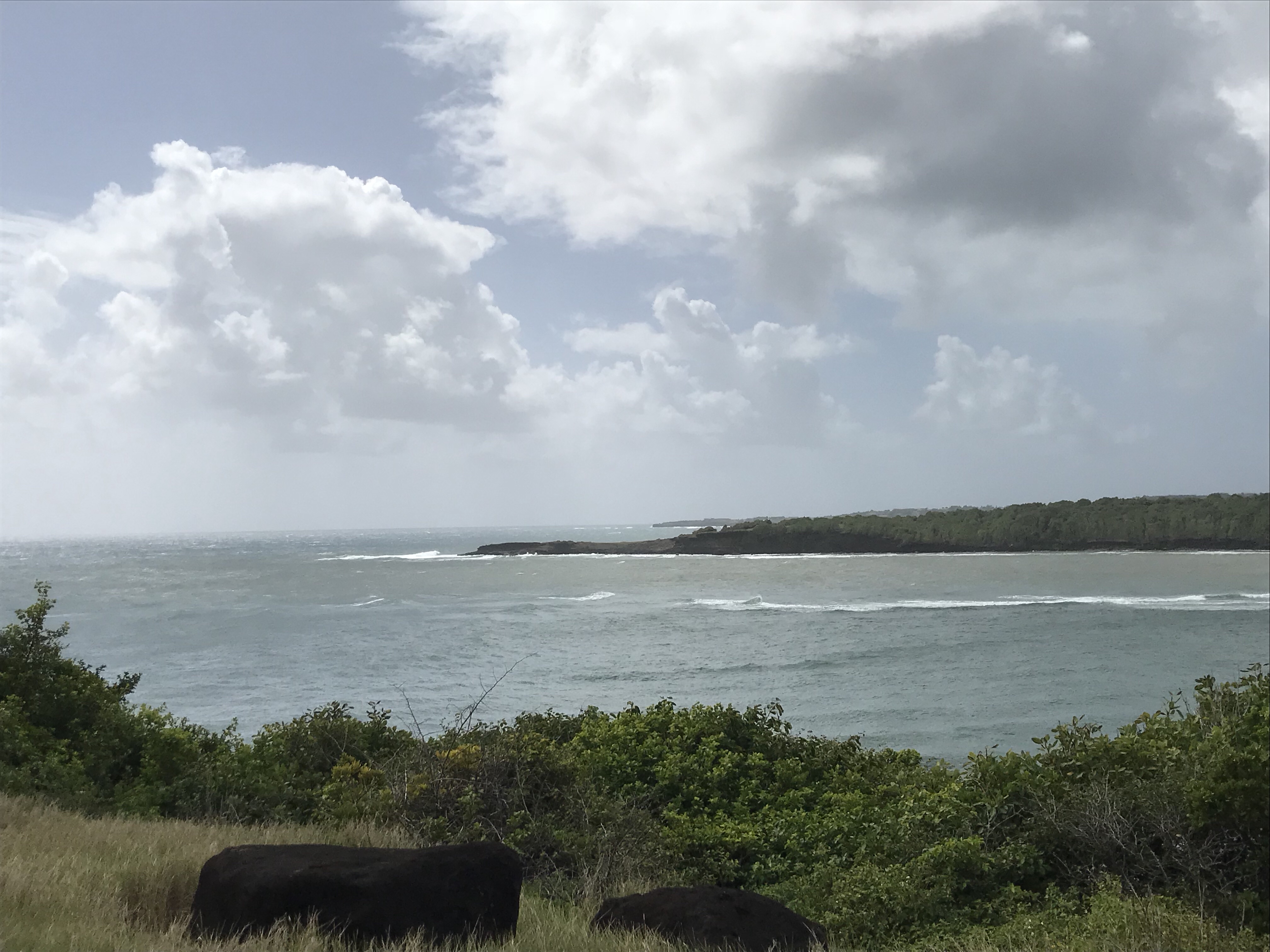 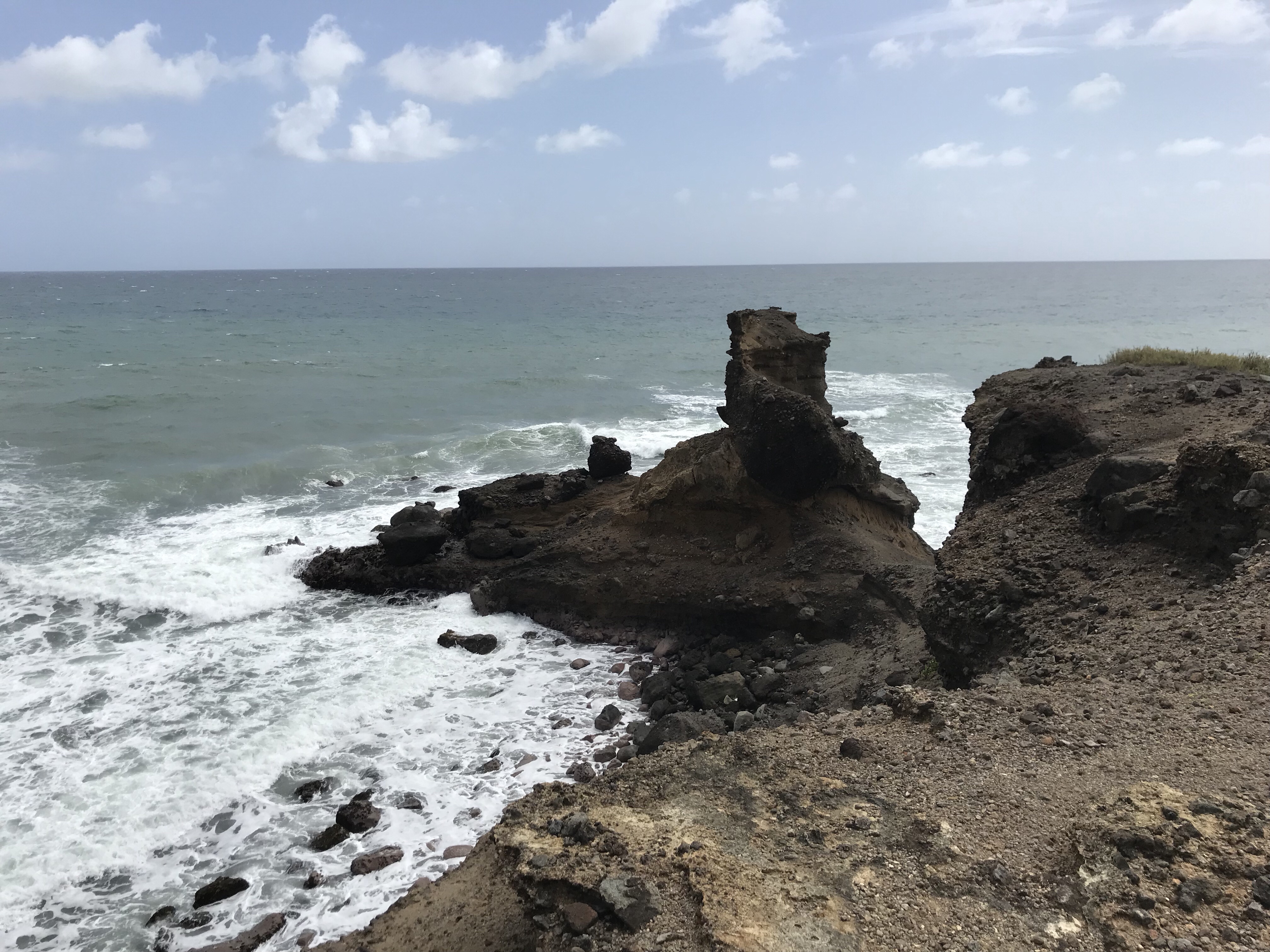 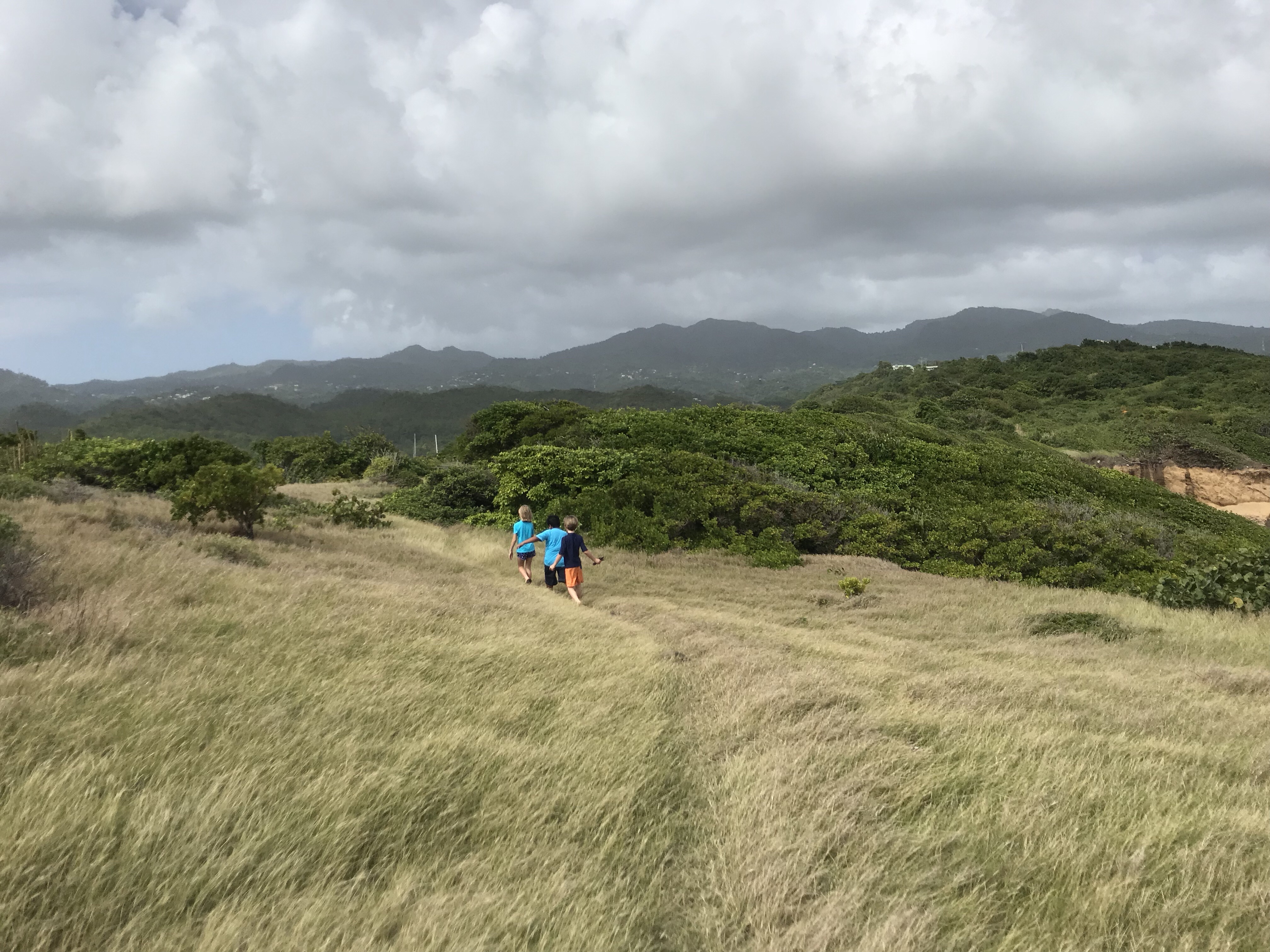 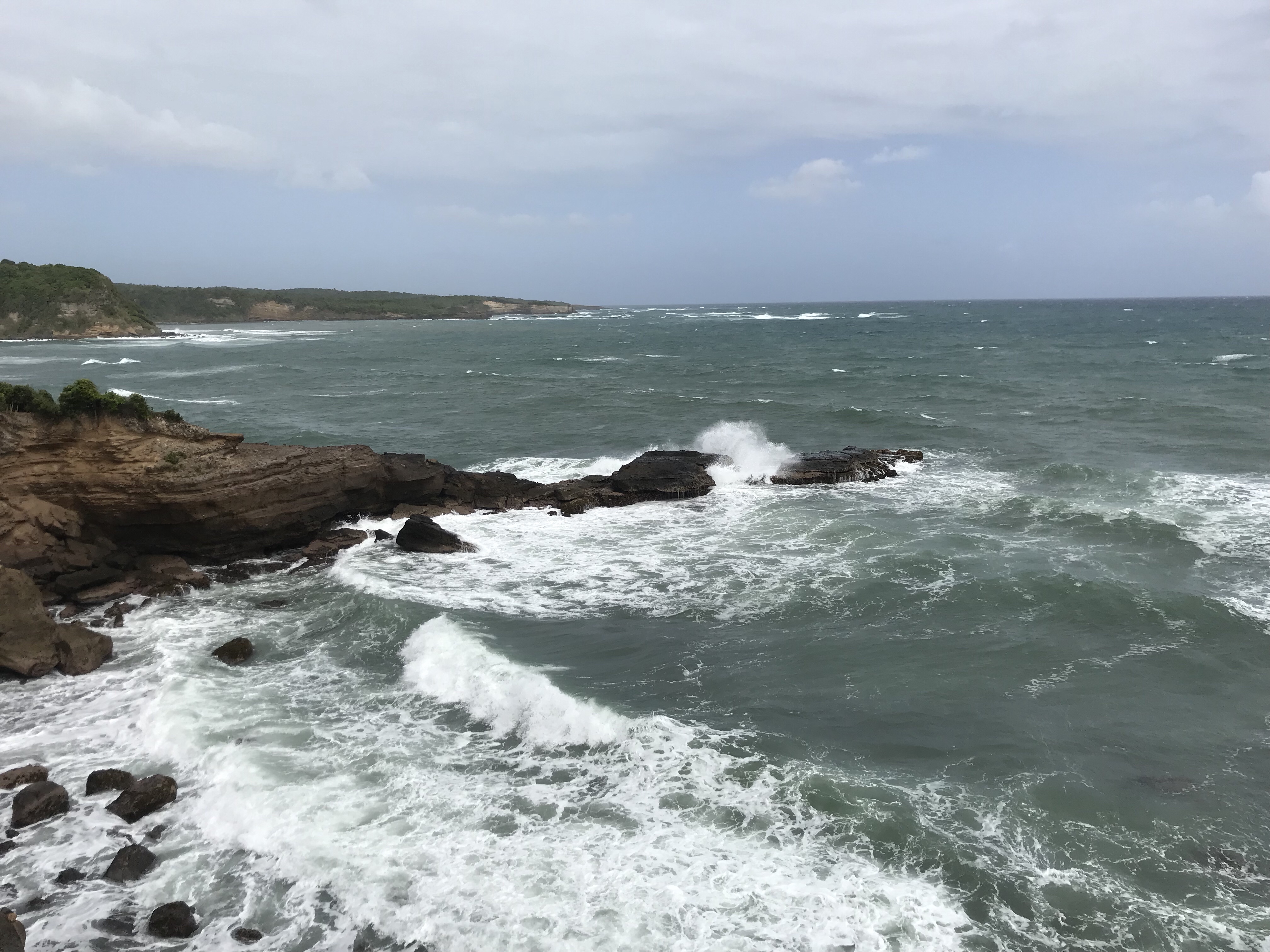 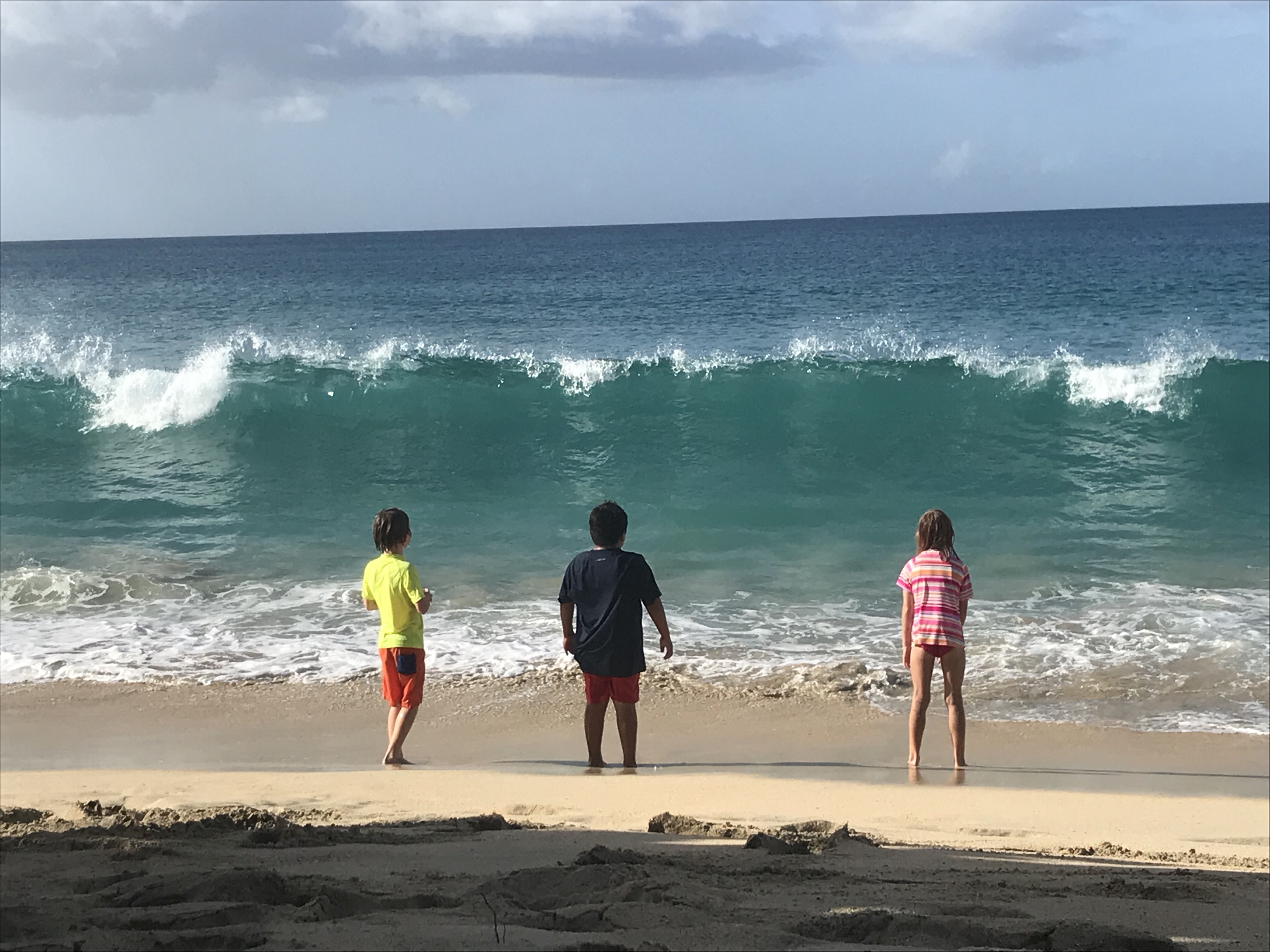 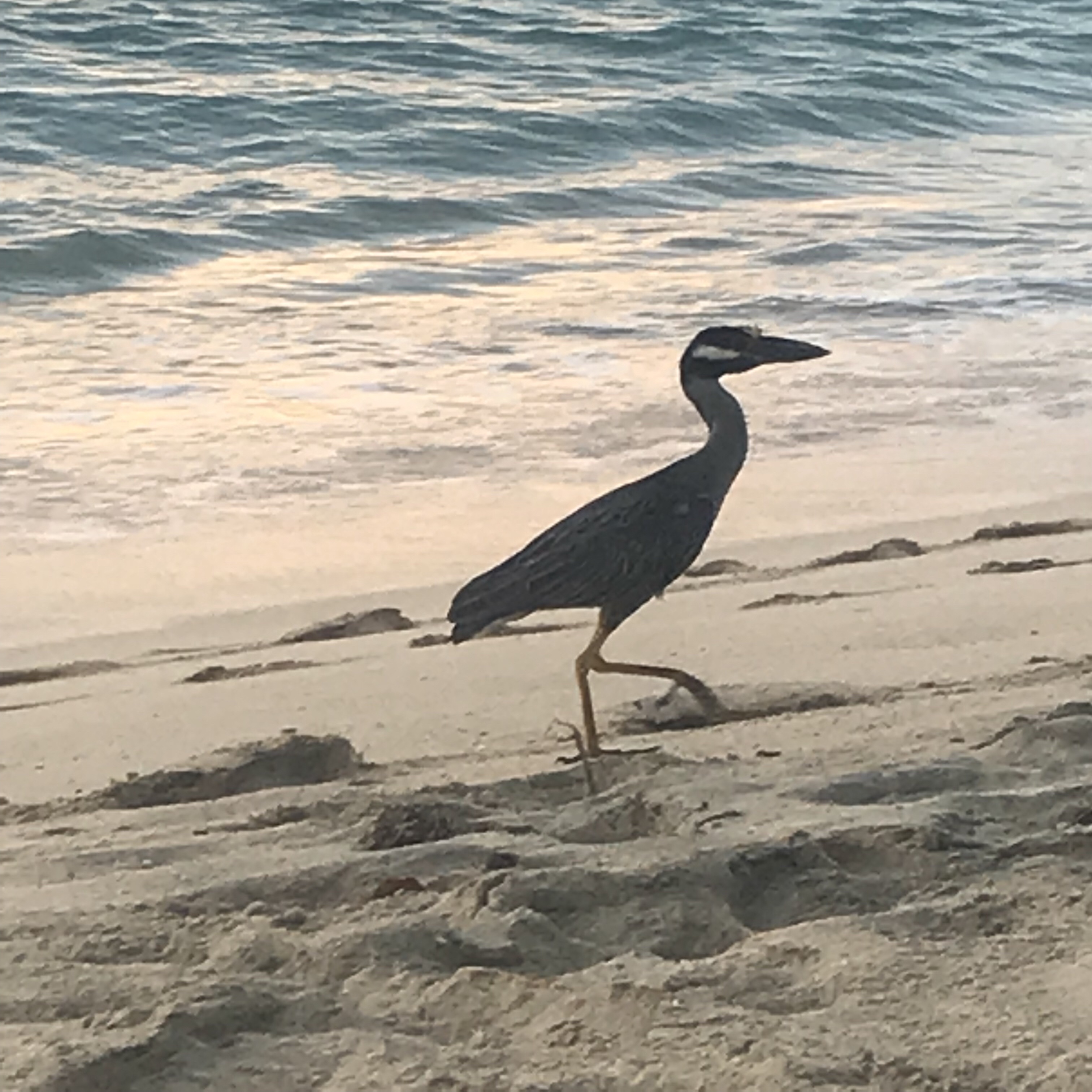