Of all the possibilities of things that could go wrong, that of watching Madame Geneva float away after kayaking to a remote rocky coral beach off the coast of Esperanza was not one of them.  Not even a flicker on the radar.

So when Justin, half submerged in water with his snorkel mask stuck to his face, asked me where the boat was, I looked at him as if he had lost it (the mind, not the boat). I pointed just past two motor cats and let my finger drift a bit to the left and a little more.  I spotted the mooring to which it was tethered and along with the mooring, Madame Geneva.  “It’s right there…there.”  Honestly the fact that our boat was several boat lengths away from where it was originally moored didn’t even register as a problem to me. 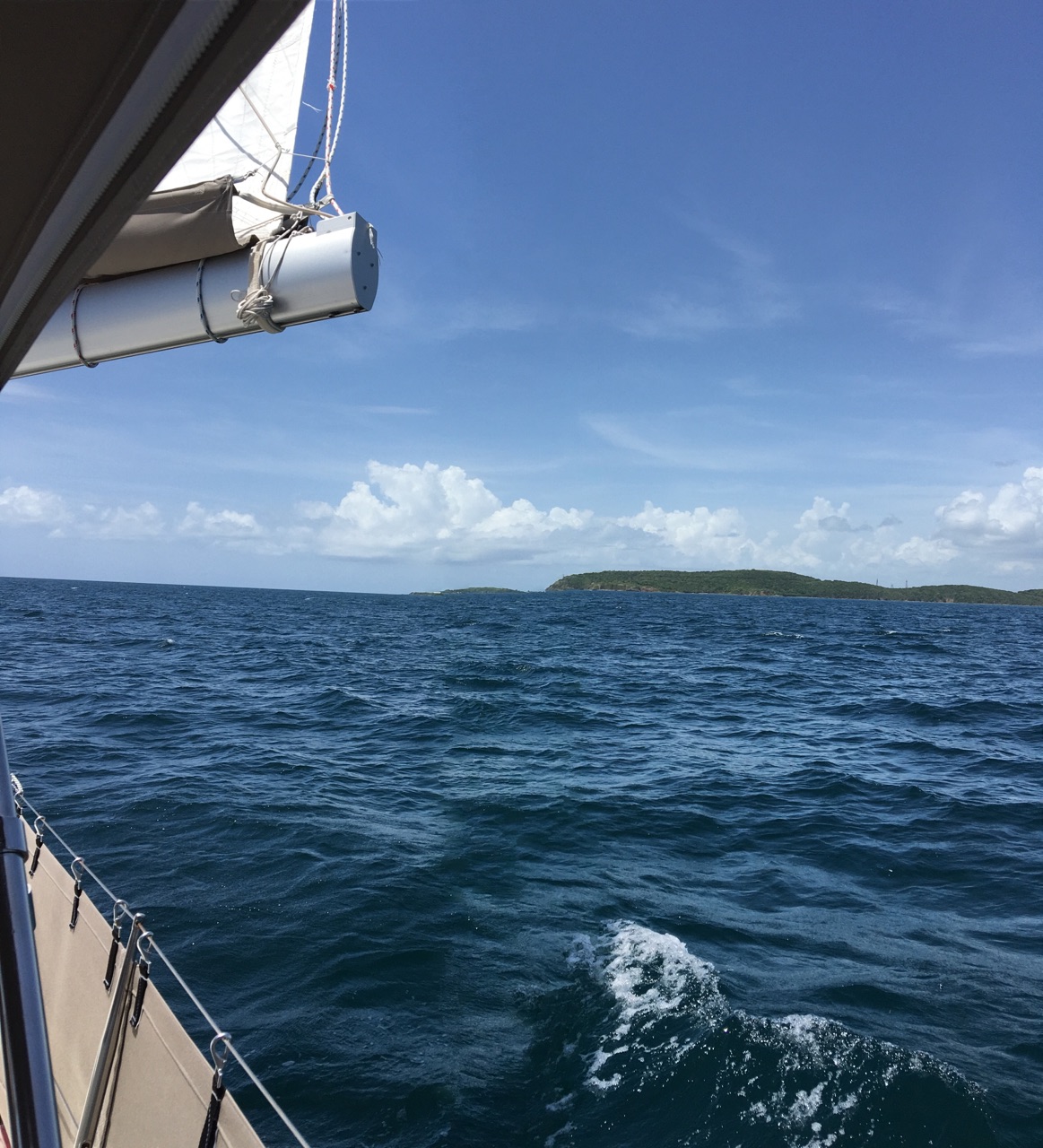 We had arrived in Vieques the prior afternoon, after a beautiful four hour sail.  Vieques sits just 7 miles off of Fajardo, but in our never-ending quest to take the ‘long road’ and avoid various obstacles like rocks, shoals, and other general navigational hazards, we had to travel about 25 miles.  The sun was high; the living was easy.  And we were sailing!  The Caribbean spilled out ahead in swirls of blue and green.  The islands were hilly, craggy and lush.  White beaches popped up along the way.  When we tucked past Pirates Mountain, we had to drop the main as we faced the trades. 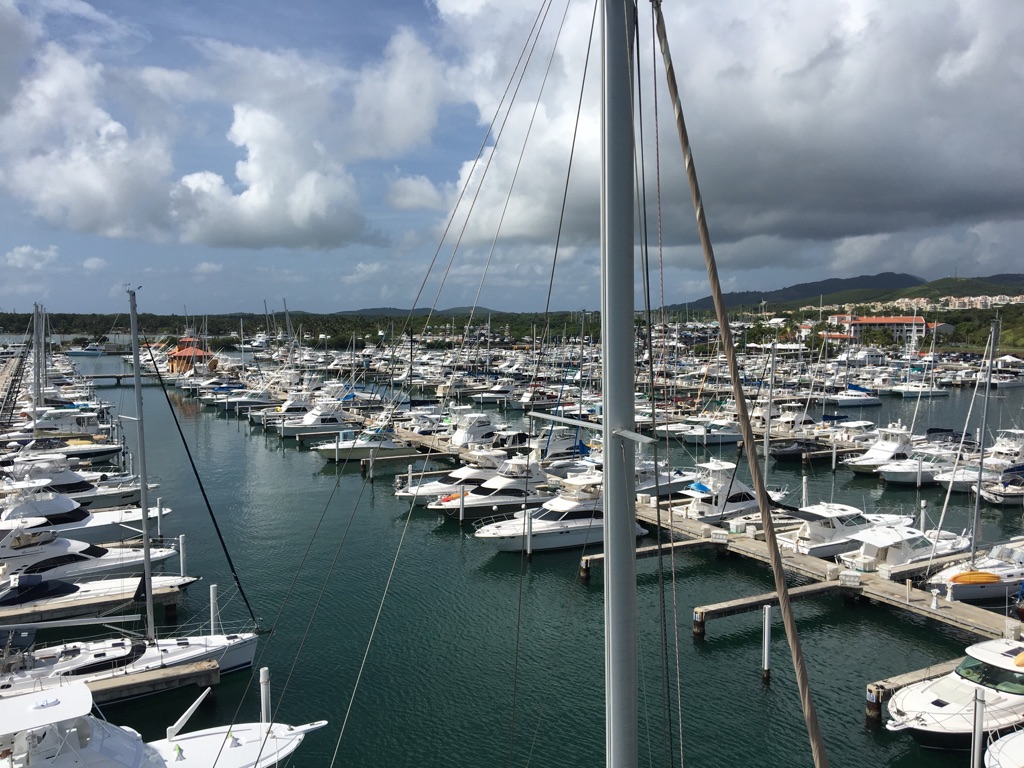 We easily motored in to a mooring in Esperanza, attached the snubber and went for a nice luxurious swim.   Later in the day, the owner of the mooring approached and confirmed that our 31,000 pound beauty could be held.   All good.  We inflated the kayaks and took turns spinning around the cove.  We had heard rumors that theft (of dinghies, kayaks, etc) was an issue so we discussed ways to minimize the risk.  We grilled dinner and settled in for a relaxing evening of movies.

The night was rolly.  Very rolly.  Like dreams of my mother rocking me rolly.  All a bit odd as the cove itself was flat and the wind was light to nonexistent.  But we bobbed about like a Jersey coconut in the waves.  The morning found Justin under the weather, whether nauseous due to the roll or to the ice we purchased the night before we do not know.  My day started rather quickly with a PFD rescue as our youngest son was fishing off the transom, and somehow that happened.  The water felt refreshingly cool and the long swim to retrieve the floatable was well appreciated.  We opted for a lazy day…until the kids were going crazy just after lunch and so then opted to inflate the remaining kayaks and go to the nearby isle for some snorkeling.

The northern side of the little island had a small sandy beach but the rest of the island was all mangrove and coral rocks.  A shipwreck just off the sandy beach marked a notorious snorkeling spot.  We decided to take a walk/climb around the rocky shore prior to getting in the water and so we were quite a bit from the kayaks (and the kids’ snorkeling gear) when Justin discovered another beautiful spot.  I volunteered to pick my way back to our kayaks and retrieve the masks.  During my walk back and forth, not once did I even look at Madame Geneva.  I was however pleased to see the kayaks where we had left them…

So when I returned and Justin was in the water and the kids on the rocks, and Justin asked where the boat was, I was thinking of pretty much everything in the world other than that.  But he was right.  The boat was the problem.  A big problem.  “It’s moving, Justin.  Definitely.  And fast.”  What I didn’t say was “SHE IS GOING TO CRASH INTO THOSE ROCKS!  THERE IS NO WAY YOU WILL MAKE IT!  WTF?!?!?”  Justin moved quickly back toward the kayaks (well as quickly as one can run over large and small coral rocks).  And I rallied the kids to follow.

I tried not to look. I concentrated on getting Che, Gherty and Quinn to the kayaks but what my plan was beyond that was way too early to tell.  Justin would likely need my help but would he even reach the boat in time?   And even if  he did, trying to keep the boat from crashing into rock, reef, or land AND getting me and the kids onto a moving boat probably wasn’t going to be easy.  By the time I got to the inflatables, I could see Justin was making headway and overtaking Madame Geneva.  Against the oddest of circumstance, the captain did it.   He made it to the ship, rallied the engine and hoped that the reverse course would not lead the propeller into trouble.  With the mooring still attached, he had no idea how long the line and chain were that were still tethered.  With no electronics (in the hurry, I hadn’t revealed to him where the boat key was), he had no idea of depth and what obstacles lay around.  So if the boat hadn’t hit anything coming, hopefully it wouldn’t hit anything going.

The kids and I approached gingerly and we all managed to get safely on board.

So this is yachting.

My former partner/boss once told me that people often make life choices thinking that they are avoiding stress and just looking for an easier life.  But life plays with you.  You can quit your job, move to Kiawah and still your house can burn down.  Life is not about avoiding obstacles but about deftly handling the obstacles as they approach.  And so yes, this is yachting.

We did not go back to the moorings.  We moved on and instead found an anchorage so serene.  The sun has just set.  We are exhausted but safe and happy.  And we have the anchor alarm on.