So clearly, we got a bit behind on our log here…but sometimes that happens when you are setting off to avoid complete solitude, vulnerability, excess seediness and find yourself instead settling amongst the sea turtles, boobies, and gorgeous coral reefs.

We left our lovely serene anchorage in Vieques mainly because we were the only ones there and while my twenties something self would think “that is so cool”, my uh-hem something self said something like “any motor boat approaches in the middle of the night and I am going to lose it”.  Granted we were a bit on edge after losing (and lassoing-thanks Captain) Madame Geneva but as a fellow traveler later said…”I know I am not the smartest guy in the room so where is everyone else?!” 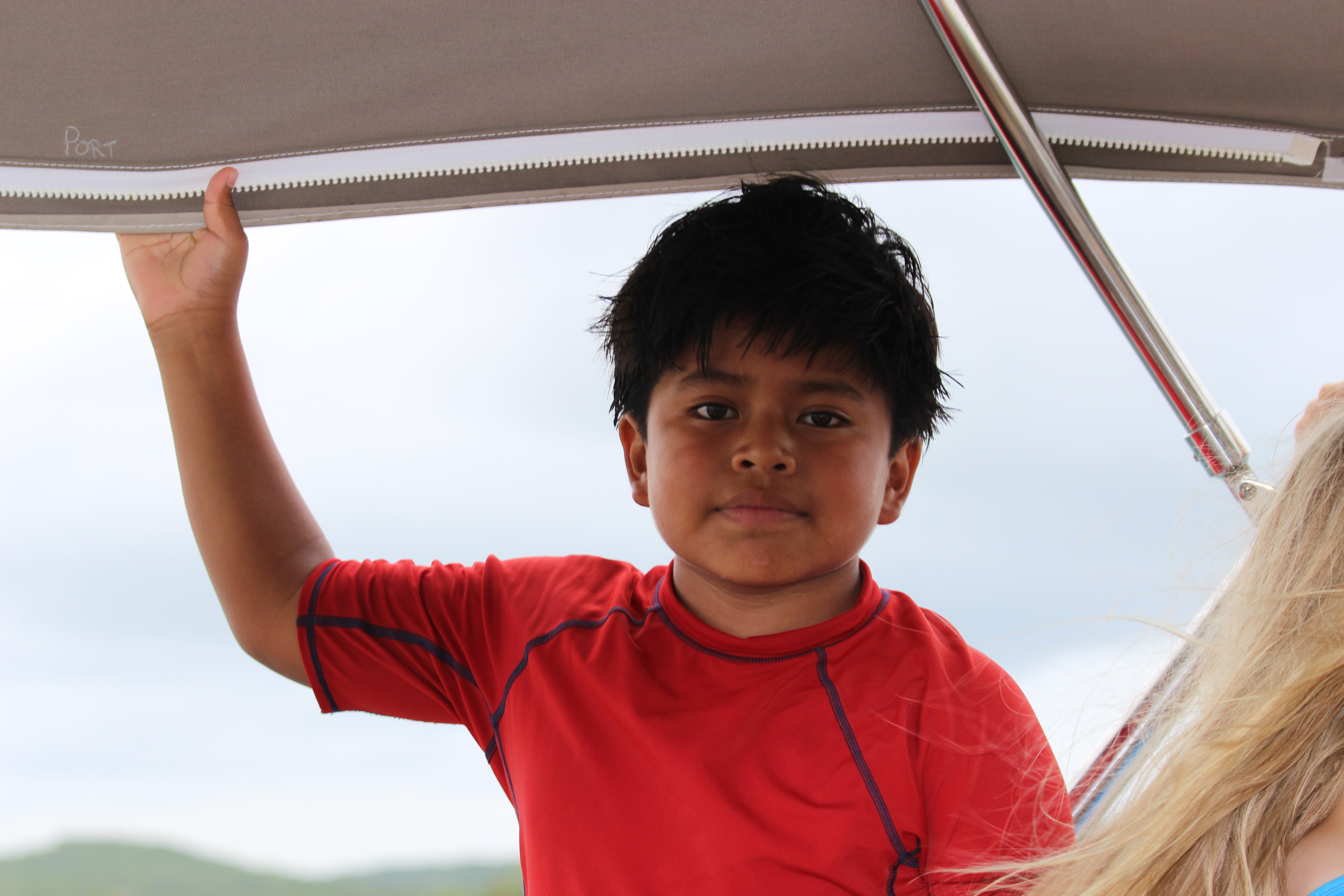 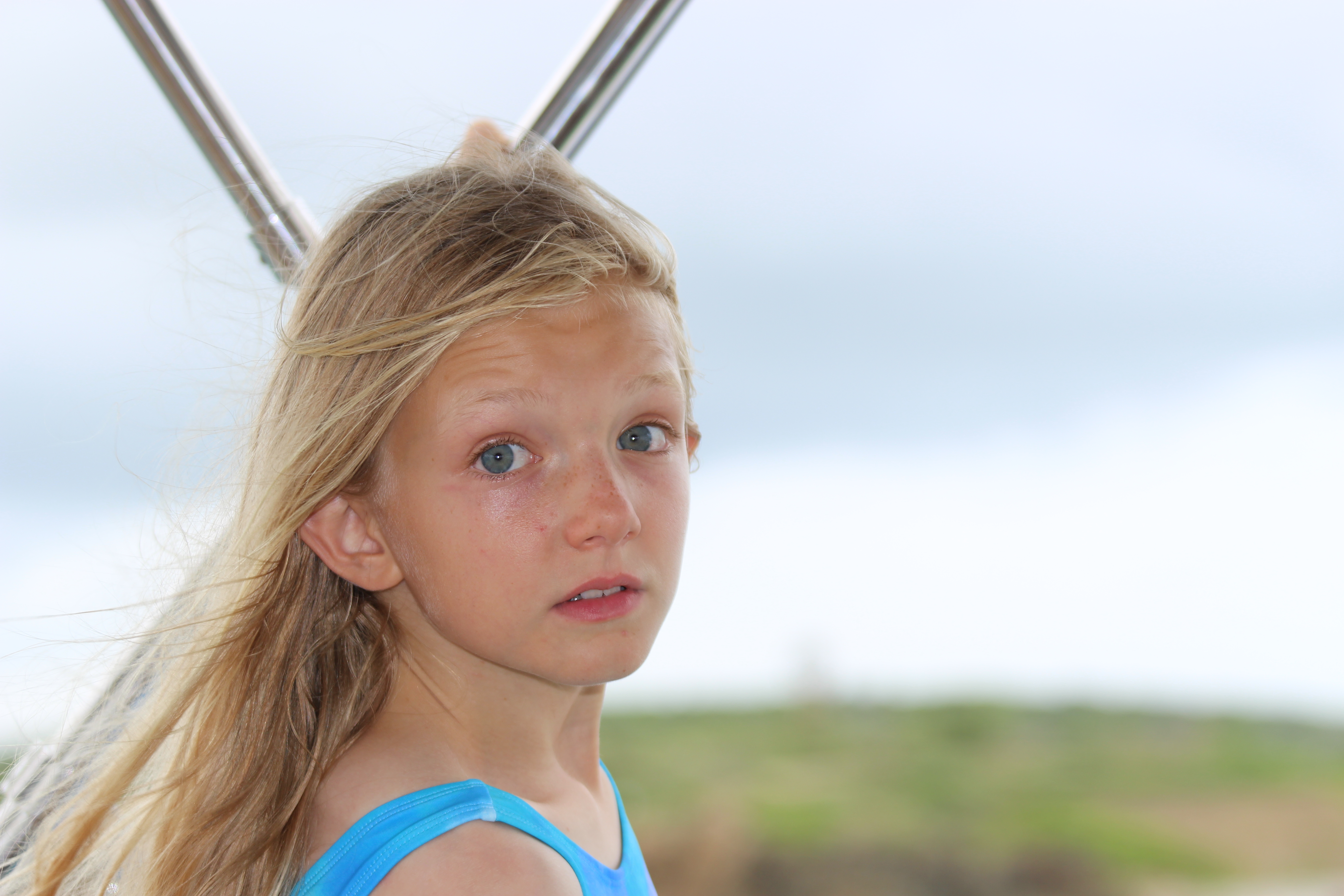 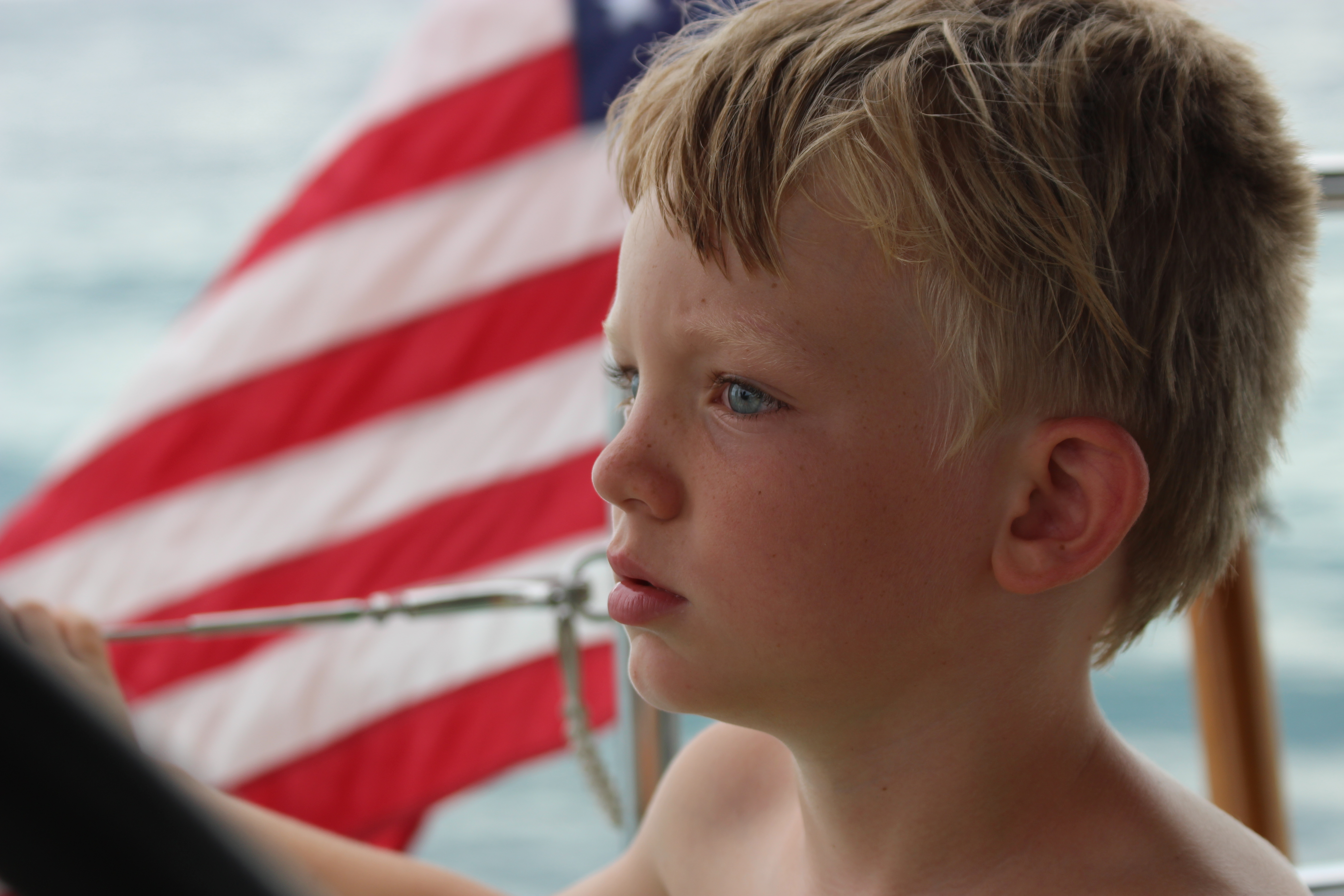 We had heard that Calebra was a beauty.  And although, in a ‘locals only’ kind of fashion, I feel bound to lie, what we heard was quite an understatement.  The crossing, though a bit bumpy, was short and scenic.  We traveled by motor and hand steering the remainder of the south side of Vieques.  Once around the east point, we let out the jib and took our time.  Where the land and water met lent the mind to wander, thoughts crashing in the surf and spray against the rocks.

We approached Ensenada Honda with a rather noticeable shelf to port and a lovely, oddly calm lagoon, Dakity, just behind it.  The wind was blowing a steady 15 and yet the boats moored were still.  We motored further in to the anchorage narrowly tucked behind a rocky island in the middle of the cove, just off the dinghy dock to the town.  Justin dove and found our anchor after some diligence as it had burrowed itself quite well in the sand.  Set nicely and yet the wind strong on the bow, we took some time before leaving MG the first time since Justin caught her.  Worry?  Well we needn’t.  Our anchor held us firmly for the next couple of days and we slept very well.

We rented a golf cart the next day and got pulled over by the police.  Apparently this is a ‘rules’ kind of island.  So long had we been traveling in laissez-faire countries and communities that it had not occurred to us that they might be concerned with five people in a golf cart.  Justin was allowed to drop us at Flamingo Beach so he could exchange the cart for an appropriate vehicle.  We took the high road.  We took the low road.  We took the paved and unpaved roads.  We waded in the water, climbed the rocks, watched the birds and looked upon some of the most insanely beautiful settings. 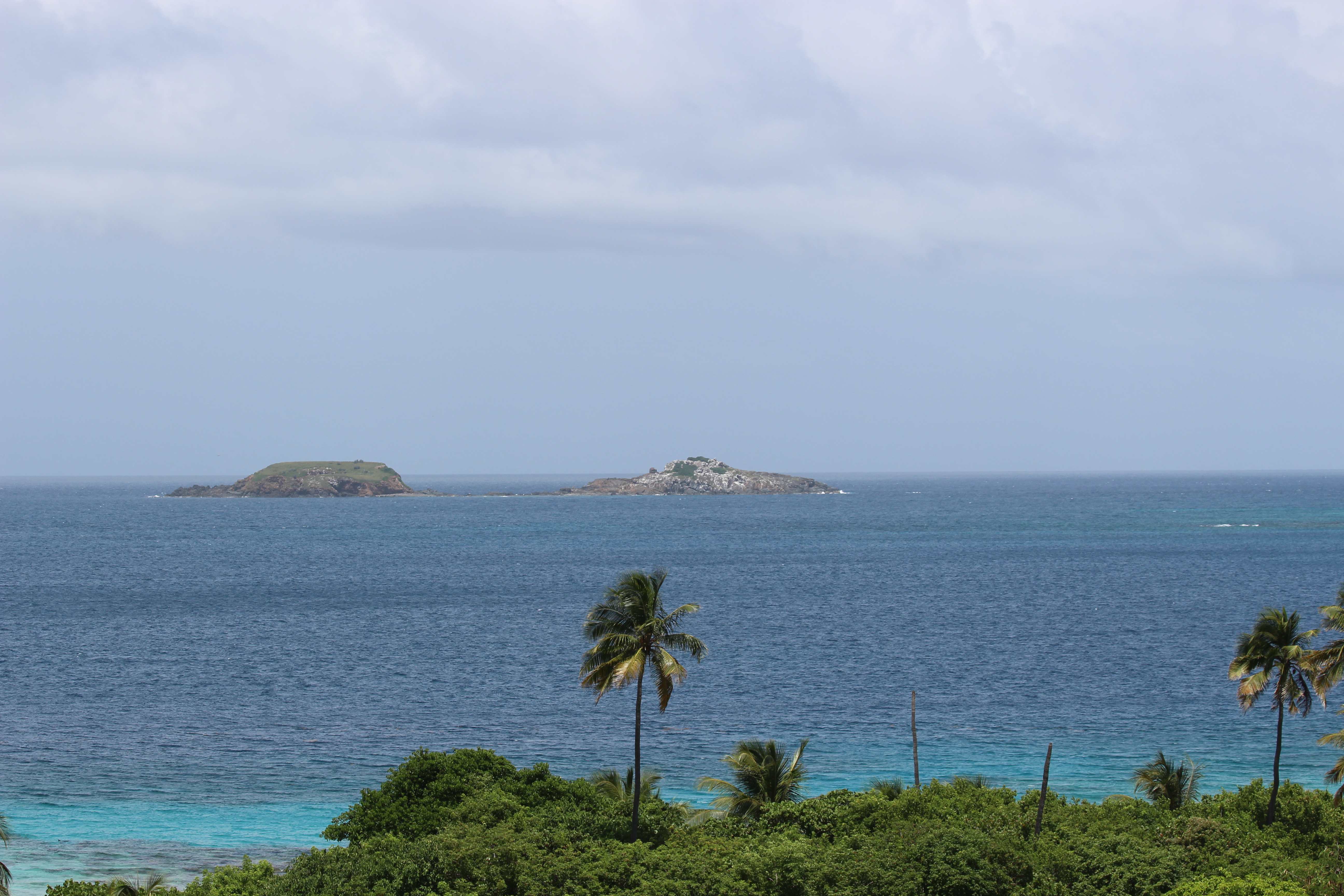 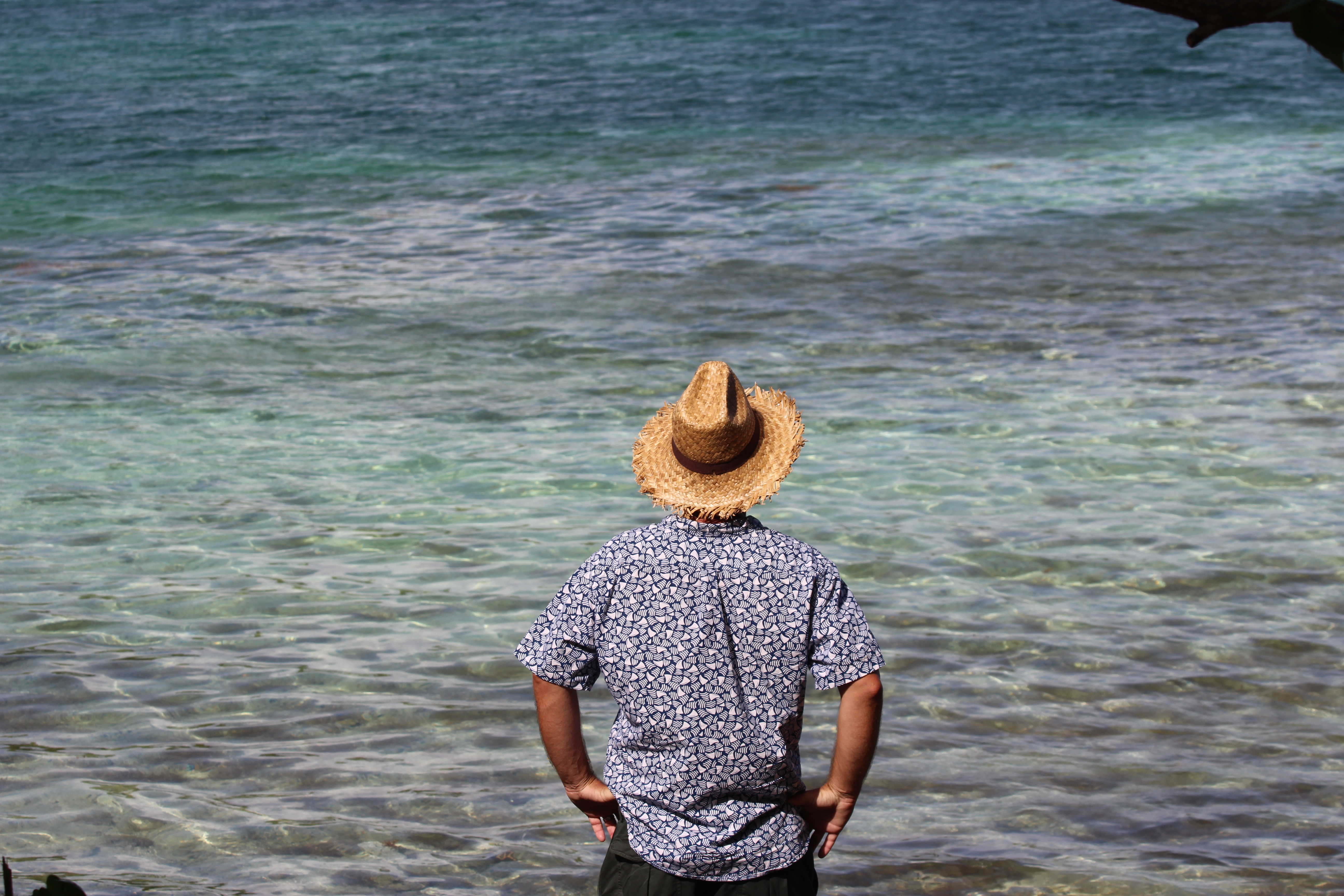 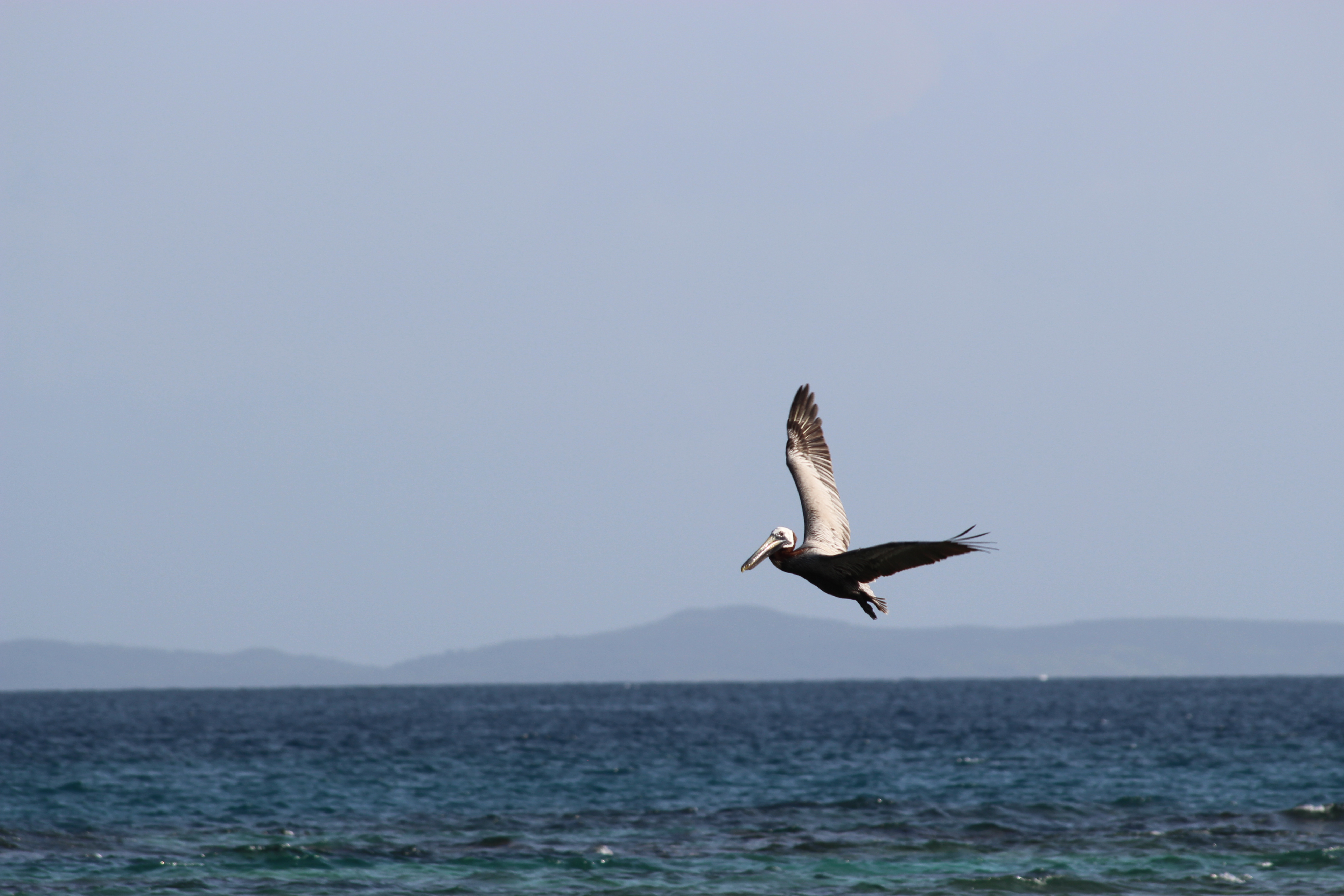 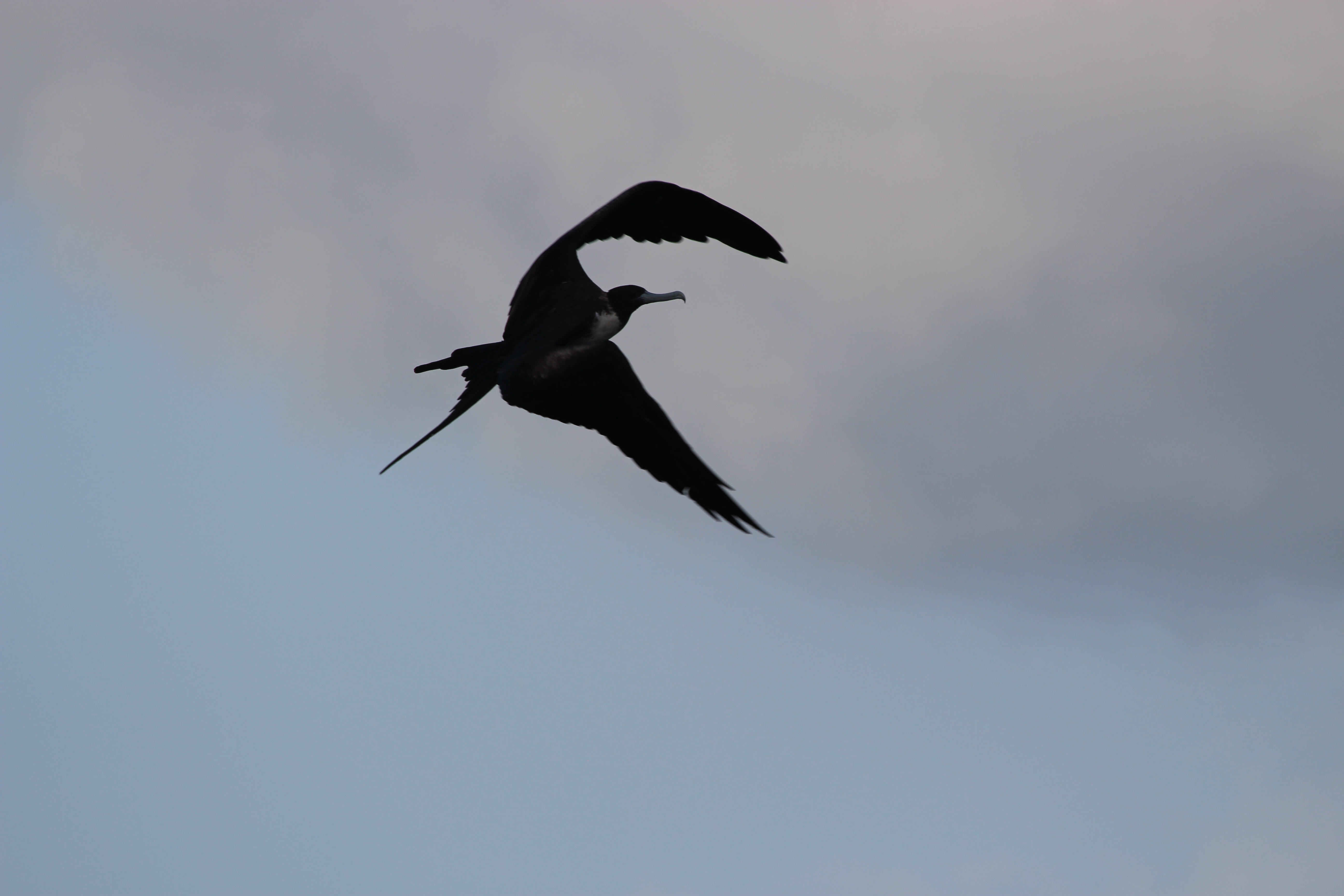 We opted to leave Calebra for the US Virgin Islands primarily due to approaching weather.  Ah that old beast and beauty.  “You keep talkin’ ‘bout the weather…you know that’s wrong…”  But while we loved our anchor, the idea of stronger winds kicking in through the wide opening to our hole or driving the boat up into the mud and anchoring her to some mangroves just didn’t have the ring of what we wanted out of a tropical low or potential hurricane plan.  So we stowed what we had below for a bit of offshore and then set off for St Thomas or St John on Wednesday.

The passage was a bit rough.  Unfocused waves (unless you count that they never came from behind), 4-7 feet, some green, were met with a focused captain steering his way to avoid a bow pounding.  Unfortunately, our youngest couldn’t ever quite get out of the green himself and while in my arms made a very delayed, and therefore messy, “I’m going to get sick” statement.  We sat at the rail until he was ready to fall asleep.  There is little more heartbreaking than when one of your children get sick and it is kind of your fault.  THE GOOD NEWS is that I later found a possible solution.  I read that plugging the less dominant ear while underway takes care of motion sickness (we have tried it and thus far it seems to be working, though still young in the testing phase). 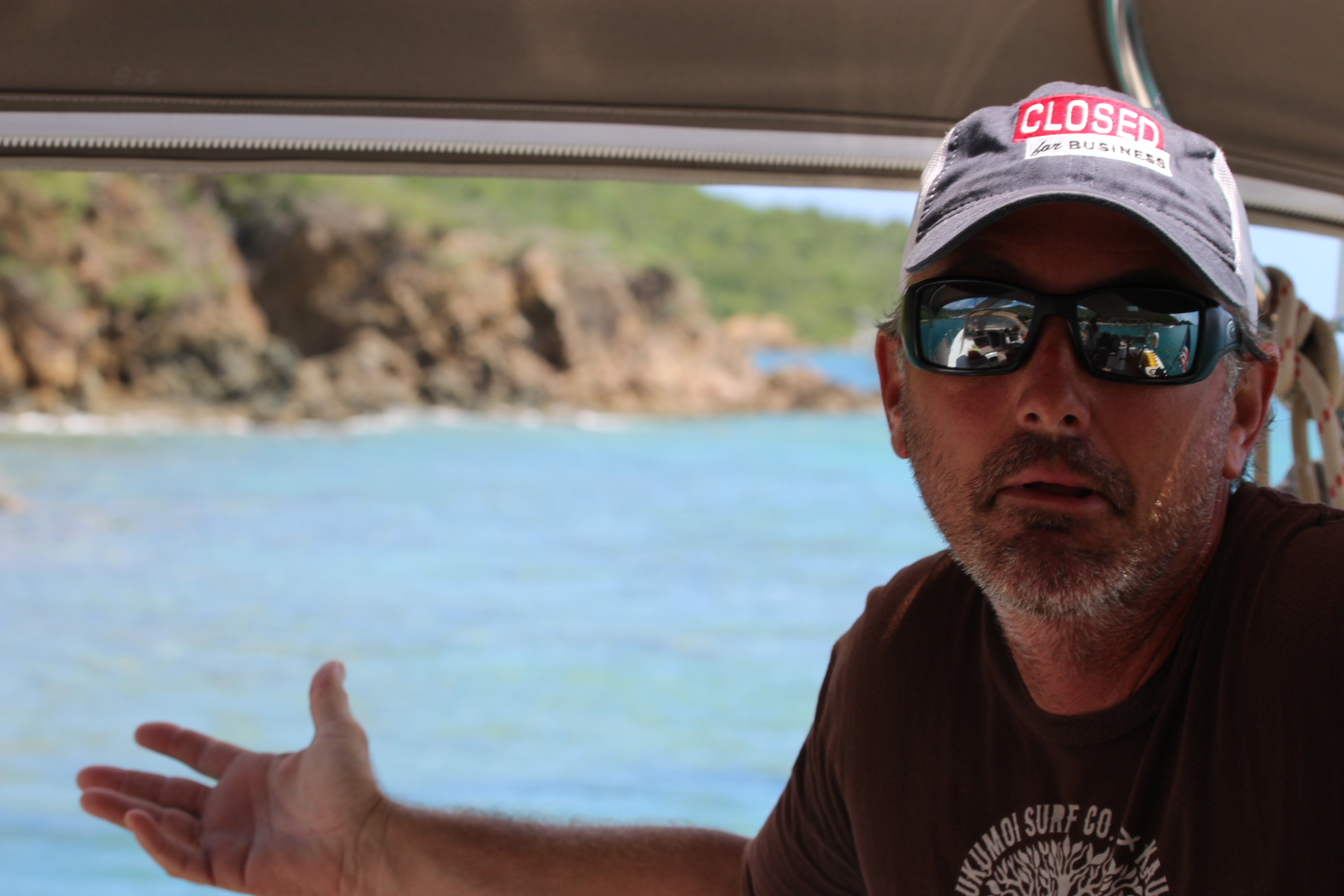 So St Thomas it was.  The approach was calm, out of the trades.  We took a super skinny passage to the waterfront, Charlotte Amalie, just to get a feel of the harbor.  Due to a more immediate need to cleanse the boat, we decided to go to a marina at least for the night.  Our stay at Crown Bay Marina was very nice.  We were one of ten boats in a marina meant for one hundred.  Fresh provisioning was at hand, as was a LONG overdue haircut for me.  The trips outside of the marina erred on the seedy side although we loved the ‘safari rides’ (open aired, 20 seats in the back of a pick up) around town.

Eye to the weather, we left St Thomas on Friday.  The ride to St John was just what was needed.  Cottonballs in the appropriate ears, kids on the rail or on deck, and winds steady but waves down all made for a happy passage.  We cut through the St James islands and literally cruised through the Current Hole (in idle forward, we were coasting at 7 knots!).  We passed Cruz Bay and picked up a mooring in Hawksnest Bay. 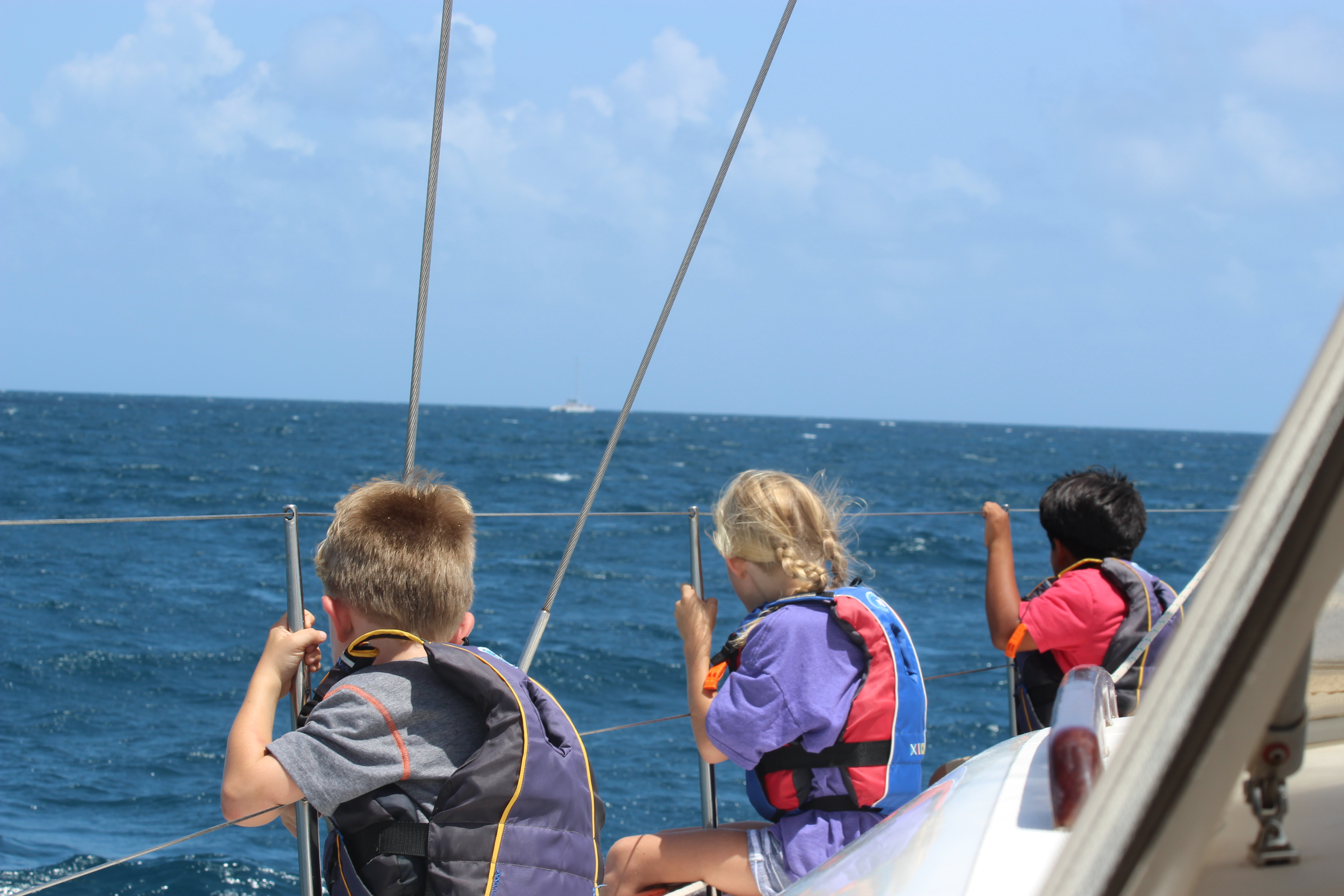 Sea turtles abound!  We dove into the clean, clear water and marveled at the coastline.  Snorkeling, games, and a lovely grilled salmon dinner only complemented a rather amazing day.  And then the rolls…apparently there were these things called ferries and they make significant wake at all hours, except 1am to 5am.  Similar to being offshore, the rocking and rolling was so severe anything not battened down was at mercy.  We opted for switching moorings early this morning and here is where we will stay a bit.  Maho Bay is open and flat, with a steady breeze.  Cut into the northern and western hills, it is a good place to moor out of the way of tomorrow’s impending storm (which as of now is just that…nothing big).

Now off to the beach for some exploration…