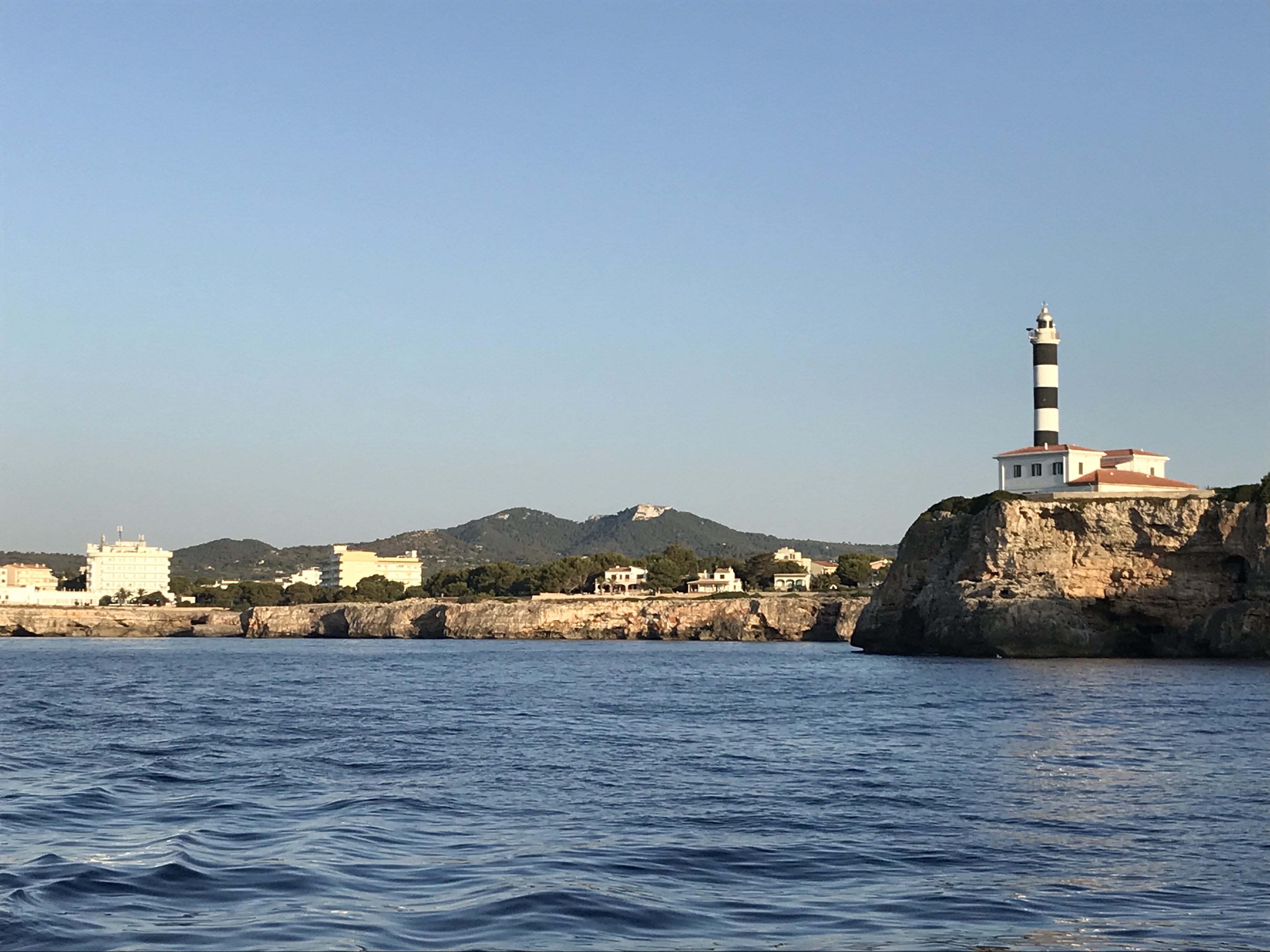 I awoke today in flat calm Porto Colom to Kelly sneaking about, engine running, making last minute preparations to slip the mooring lines and cast off. She had Madame Geneva all set and said, “I got this”. I lurched out of bed to see that she did, so she finished her routine, cast off the remaining bow line, and motored out of the Cala into the Med noting she had 64 degrees magnetic to the southern tip of Menorca all figured. Adios Mallorca! It’s been fun. Now onto adventure next. North by east over a hazy morning horizon. 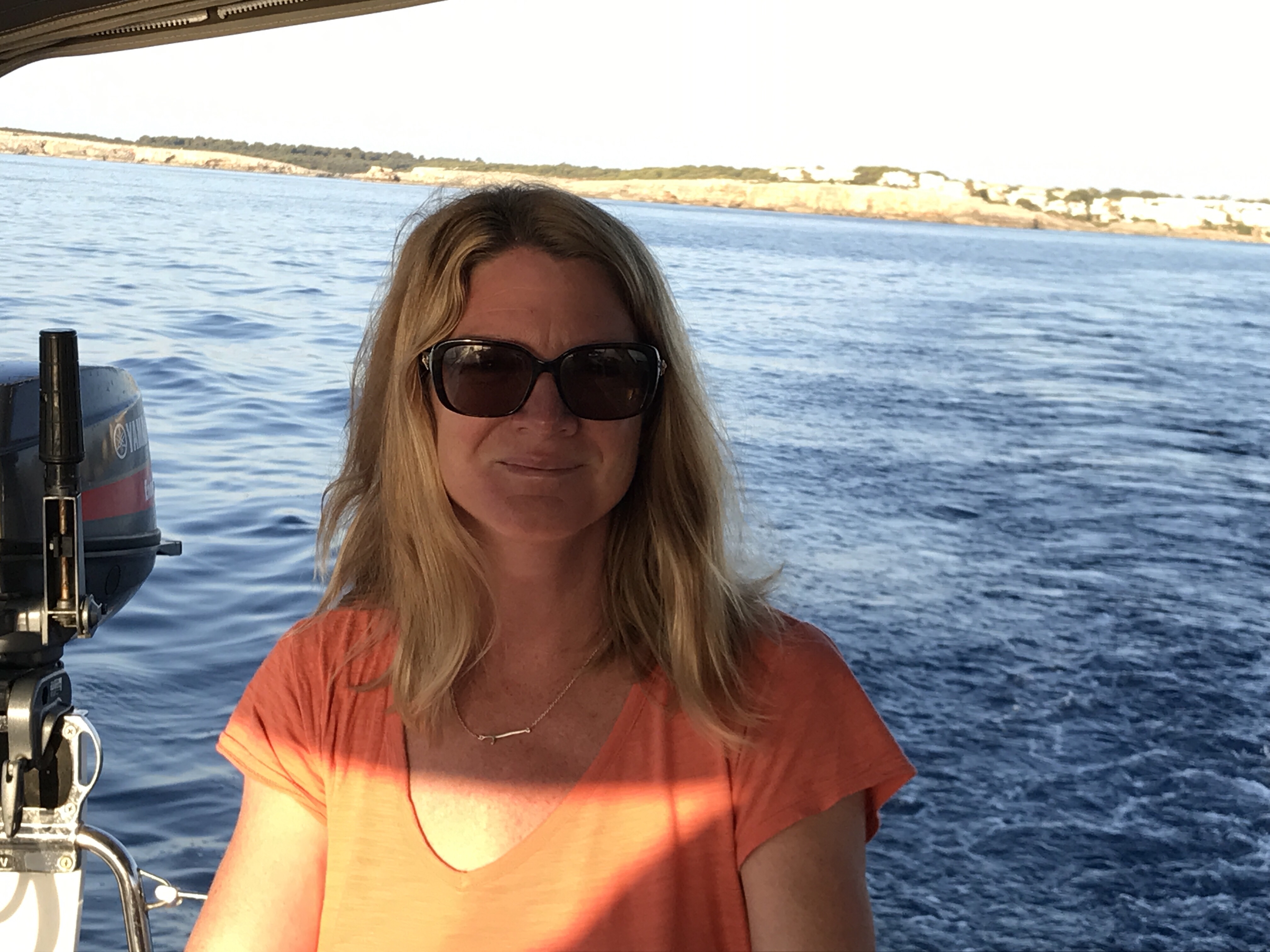 We were delayed back in Palma because apparently there was a large hefty bag of money that wasn’t going to spend itself. So, with a new turbo charger installed on the Diesel, new rings and prop cone on the sail drive and 840 watts of solar (ohhhh yeah) on our newly built (and rebuilt) tower we had to wait a heavy week before heading out. So to make the most of it we dove deep into the bits of Mallorca we had left to see. 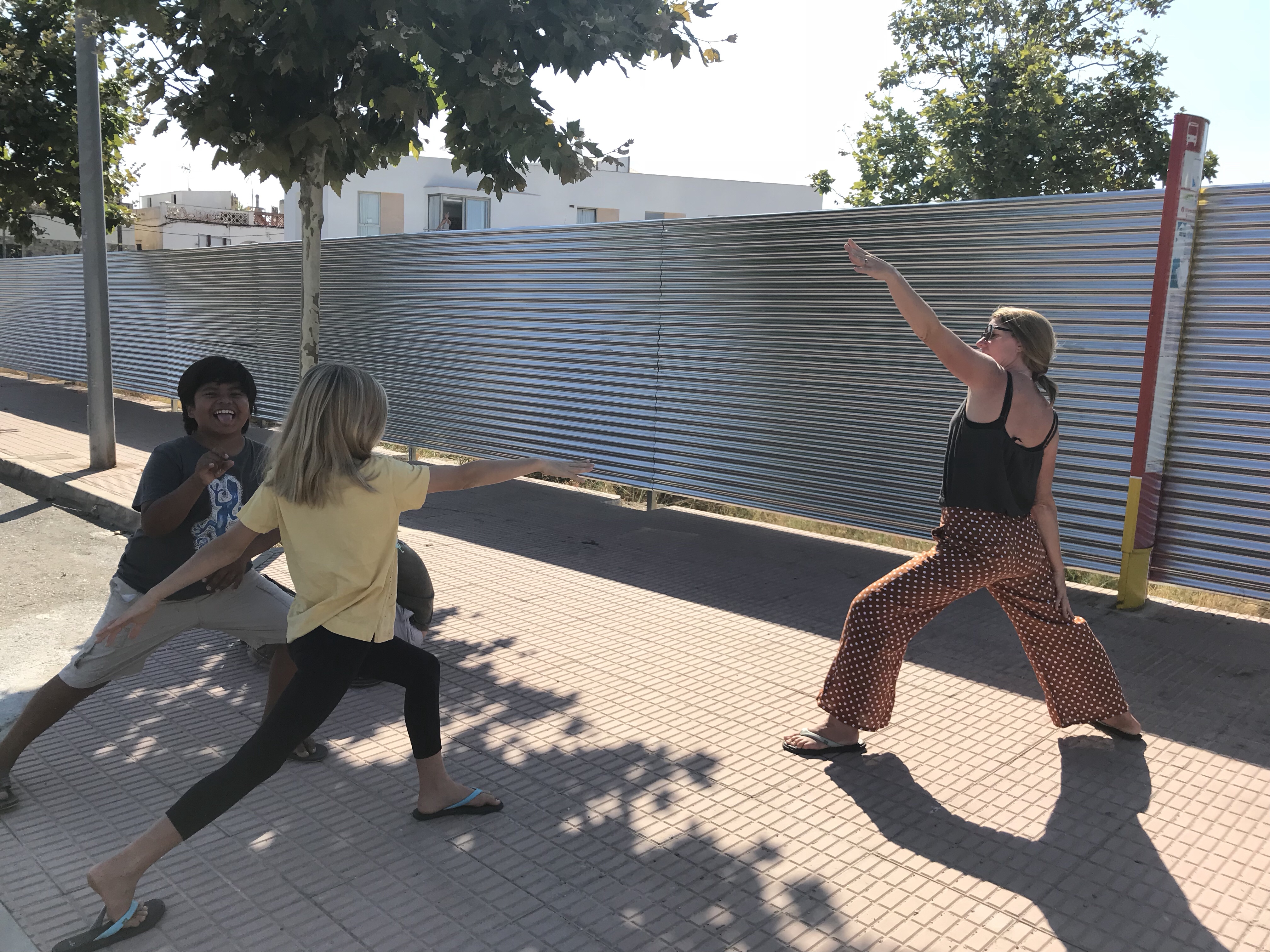 Family bus rides and transfers in Spain are fun. Maybe not when you’re 8, or 10, or 11.75 but they are. So much to see when you leave the coast and such large, modern picture windows to see it through if only you weren’t glued to whatever saga the children were reading at that moment. Hell, if nothing else we have children who are avid readers if not soaking up the world. I think there’s some credence to the theory of osmosis though.

We checked out Valldemossa in the mountains. It’s a beautiful town with the summer palace of King Santo something-or-other where Chopin and Georges Sand overwintered in a monestary in 1838-1839 and wrote some of the most iconic romantic piano music ever. There’s a great museum in the monkery and we stood in the cell with the piano, Chopin’s work softly playing and his hand written sheets scattered about under glass. My arm hairs stood up and I was once again the recipient of a lump in the throat, “how profound the highest expression of man”, moment. Cathedrals, chiaroscuro oil paintings, Picasso, Miro, art nouveau ornament, Gaudi’s melting architecture. Europe continues to both crush and exalt me. Just what I am needing at this particular moment in time. We bought tickets to a “show” in the palace where we got to watch a pianist play selections of Chopins work from memory and Quinn fall onto the chair next to him moaning “when will this beeee ovvverrre?”. Only the pianist was paid for this performance. The frescoed cherubs adorning the elaborate crown mouldings were not impressed. 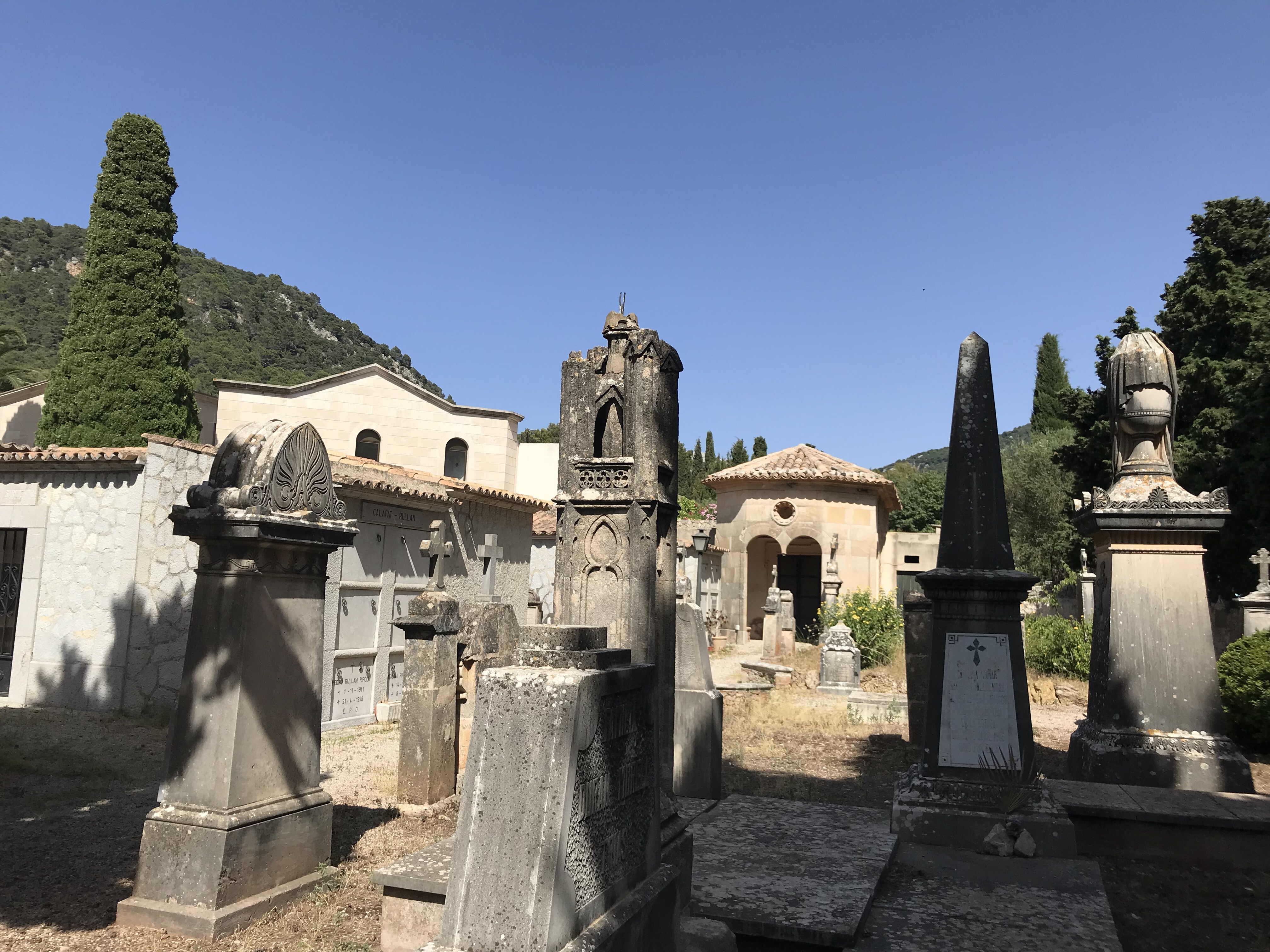 A few more days tied up along a stone wall in the STP shipyard baking in the heat trying to occupy the children with rollerblading and various wheeled distractions while highly skilled and polite Spanish interlopers dug, banged and sweat in our boat.

We had a truly special moment last Friday when we slid off the quay for a couple hours outside Palma Harbour to take part in a final worldwide send off for Kelly’s brother Joe. After his passing this spring it became more and more clear to me just what he meant to the free spirited surfing communities he had lived with in Ocean City, New Jersey, San Diego and the North Shore of Ouahu. OC dedicated a perpetual spirit award to their surf contest in his name and simultaneous paddle out ceremonies took place at dawn in Hawaii, breakfast in Dago, noon in OC and 6 pm in Palma. Joey is with us on this trip too and he was ceremonially sprinkled lovingly from the transom of Madame Geneva by our family as we sailed 263 degrees magnetic directly towards Ouahu some 8500 miles away. We saved some last ashes to commit to the waves at the exact halfway point on our transatlantic crossing. I think Joey would like that.

Once free from the shipyard we bid our friends a dry eyed adios and headed east close reaching with the code zero at 6-7 knots in 8-10 knots of breeze to Porto Colom for one last stop in Mallorca for as we had circumnavigated the island and seen her interior we had yet to venture underground! Oh, wait, we did take a vintage wooden train ride, more than 3 kilometers of which was through tunnels….whatever. The Caves of Drac! Awesome, magnificent, spectacular!! How do you say “please get me a cattle prod, a can of wasp spray, a stink bomb, ANYTHING to get this German lady to stop bumping me and coughing in my hair!!!”?”” It was jam packed and life aboard a boat with your family, although cramped, is a life and proximity you have chosen. I wouldn’t diagnose it as a panic attack so much as a “if the lights go out I’m eating the first tourist that smells like ice cream” feeling. Time for some offshore. 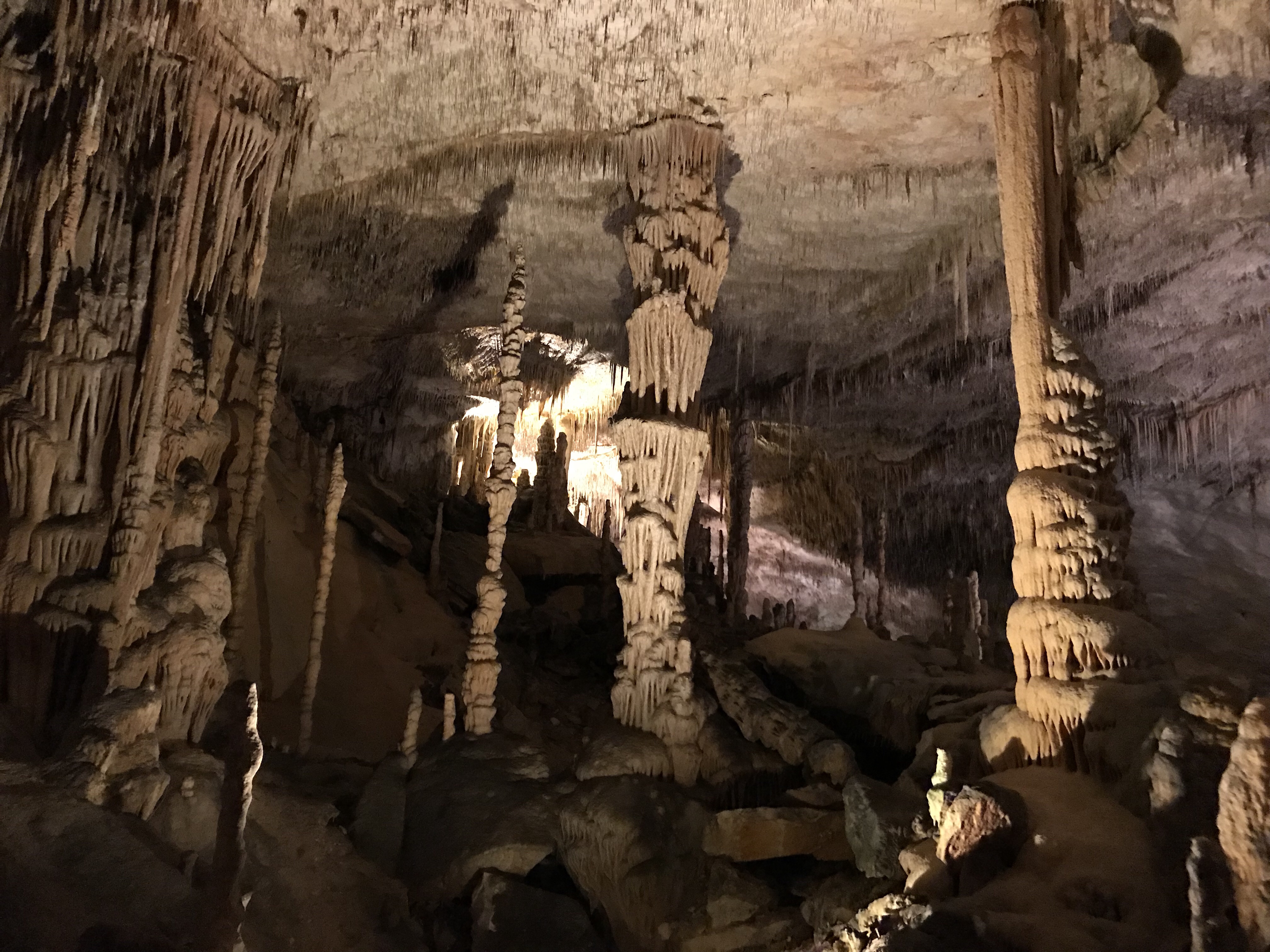 Flat calm and steaming at eight knots should have us in Menorca mid afternoon though from my vantage point behind the helm it’s understandable how my predecessors navigating this ancient sea expected to fall off the edge.

Menorca? It’s just east of Mallorca. Still Spain. Our stopover on the way to Sardinia. Other facts? I have few. We’ll just have to see when we get there.