We bid au revoir to Marigot on Sunday, having enjoyed a lovely hike to the lookout at Fort Louis.

As with all of our plans, both efficiency and direction played their parts as we headed north to go south to St. Bart’s. Quinn was quite disappointed to hear that we chose to take the long way around the island of St. Martin. “Why don’t we go to Anguilla?  It’s right there!”

We raised the main and found there were a couple of reefs still in effect. This problem is discovered through dialogue like: “It’s not going up.”  “What is that awful noise (halyard straining)?” “I think it’s stuck.”  This is inevitable after months of not sailing…  then at last, sealegs secured, main fully hoisted, jib unfurled and we are in fact sailing. 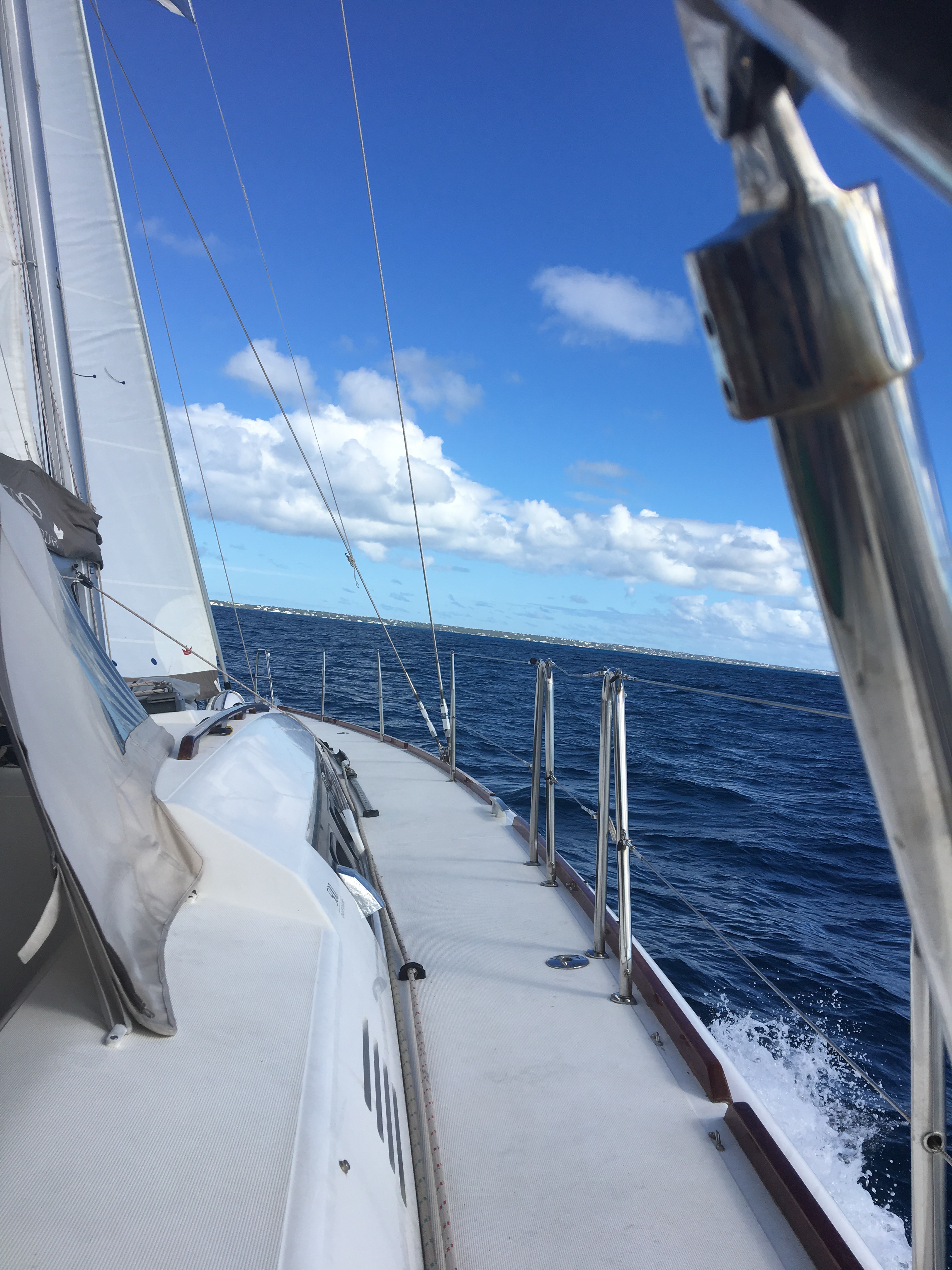 The trip across the northern coast of St. Martin was quite beautiful. As Quinn stated we were in fact quite close to Anguilla, when we changed tack and headed for the pass between Tintemarre and Pinel. We had to tack a few more times to get a good vector through the cut, mainly because the current was pulling us into the coast of St Martin. We slowed considerably on the eastern side and opted to motor sail for a bit to increase our speed from 4.5 knots.

Ile Fouchure was our immediate destination for a lunch stopover and a swim. The marine reserve boasted plenty of moorings but upon our arrival, these were in fact few and many boats were simply anchored. The carcass of a catamaran lay against the rocks reminding us that not all days are as calm as this.

We left the anchorage so that we’d have plenty of time to clear into the Port of Gustavia.  We bumbled through some French after grabbing a mooring that was private. Although the guidebook advised there were moorings available if you were lucky, it neglected to advise that those moorings were located well in the bay and were quite rare.  We noted much later that there were a couple of moorings  secured within yards of some mega yachts but we both agreed we were unwilling to take the risk of grabbing a stern mooring and hoping that the strong surge in the harbor would not push us into those yachts prior to grabbing the mooring off the bow. Sure we could do it…but the reward did not seem worth it.

Instead we anchored just outside the bay. The captain cleared us in, taking with him our passports and boat identification. Upon his return, we climbed into the dinghy and went ashore. I once went to London when the pound was rather at an advantage to the dollar. I remember then feeling that my money was inadequate in a way I hadn’t felt since college. St Bart’s puts a rather deeper perspective on money that moves away from inadequate to almost irrelevant. We did splurge on taking the kids to a Thai restaurant for dinner, which was fun and well enjoyed.

We walked back along the quay to our locked dinghy. We had purchased a 3/8″gauge chain and a thief deterrent lock, as there is propensity for stealing dinghies and engines in the Caribbean. The kids were delirious with being awake at a late (for them) hour. Lots of giggling followed by dancing in strobing lights along the sidewalk. Quinn was leaning heavily on my arm as he does when he wants to sleep and walk at the same time.

I thought Justin was joking at first. “The key won’t turn.”  But reality settled quickly when the key then broke in the lock and we were suddenly stranded with a locked dinghy and engine on a Sunday night along the quay in St Barts. The kids were deflated. Gherty wanted to know if we had to sleep on the dinghy…I thought well if we do that we might be more likely to attract the police (and they probably had bolt cutters, right?!).

I took Gherty and Che back to the restaurant with me to see if they had bolt cutters or know of someone locally to help us. They did not. I asked the old fellows sitting on the bench along the way back if they had ideas (in French, using Che as a prop as I described said bolt cutters…it is never the useful words you know). They did not.

We returned to the boat but Justin and Quinn were gone. We carried on toward the megayachts as perhaps they had some tools?  These pristine vessels were well over 200 feet. Their gangways hovered over the surging water so as to not make contact with the dock. Beautifully kept but without apparent occupancy and therefore seemingly unavailable to help our cause.

Sitting on yet another bench were three very well dressed men. Tall and good looking (though not as tall or as good looking as Justin of course) with shoes that cost as much as a state education, they smiled at our approach.

“I have an awkward question for you…” I began. After they pleasantly confirmed that the boat they would help to relieve of its chains was in fact my boat, one jumped up and leapt onto the ever moving gangway. He returned with bolt cutters in hand and away we went to engage in seeming theft.

Justin and Quinn were waiting at the dinghy having secured their own almost success story. They had found someone to give them a ride out to Madame Geneva where we had our own bolt cutters but to their dismay, I had the boat key. So instead Justin and Justin (turns out our helping friend had the same name) broke through the chain and we were free!

Our captain, Justin, told me later that the guy who brought them to MG, Karl, said “Today is not your day.” To which Justin replied, “But every other day is.”

The next morning we headed back up the coast to Anse du Columbier. The cove was simply gorgeous. Plenty of moorings. Lots of fellow sailboats. We dove off and the boat and swam.  Justin inflated kayaks and soon the kids were off paddling by themselves, exploring and then landing on the beach. Rocks were climbed, castles built. Justin and I watched from the cockpit, proud of their determination and independence.

Justin began sketching and painting another boat. Later we met a couple who traveled from France with their son. Our kids played together (though they were all initially shy, they quickly invented a game with an upside down kayak in the waves) while we chatted on the beach. They too were taking a year. They too were heading south. And it turned out that the boat Justin painted was theirs. I believe our paths shall meet again.

Yesterday found us back in Gustavia, looking for parts and provisions. Surprisingly the shopping was significantly cheaper than on Sint Maarten, and with great selection. We picked up meats and fruit and lots and lots of wine. And we even found a great copy of Treasure Island to read to the kids. So we can now say we went shopping on St. Barts. 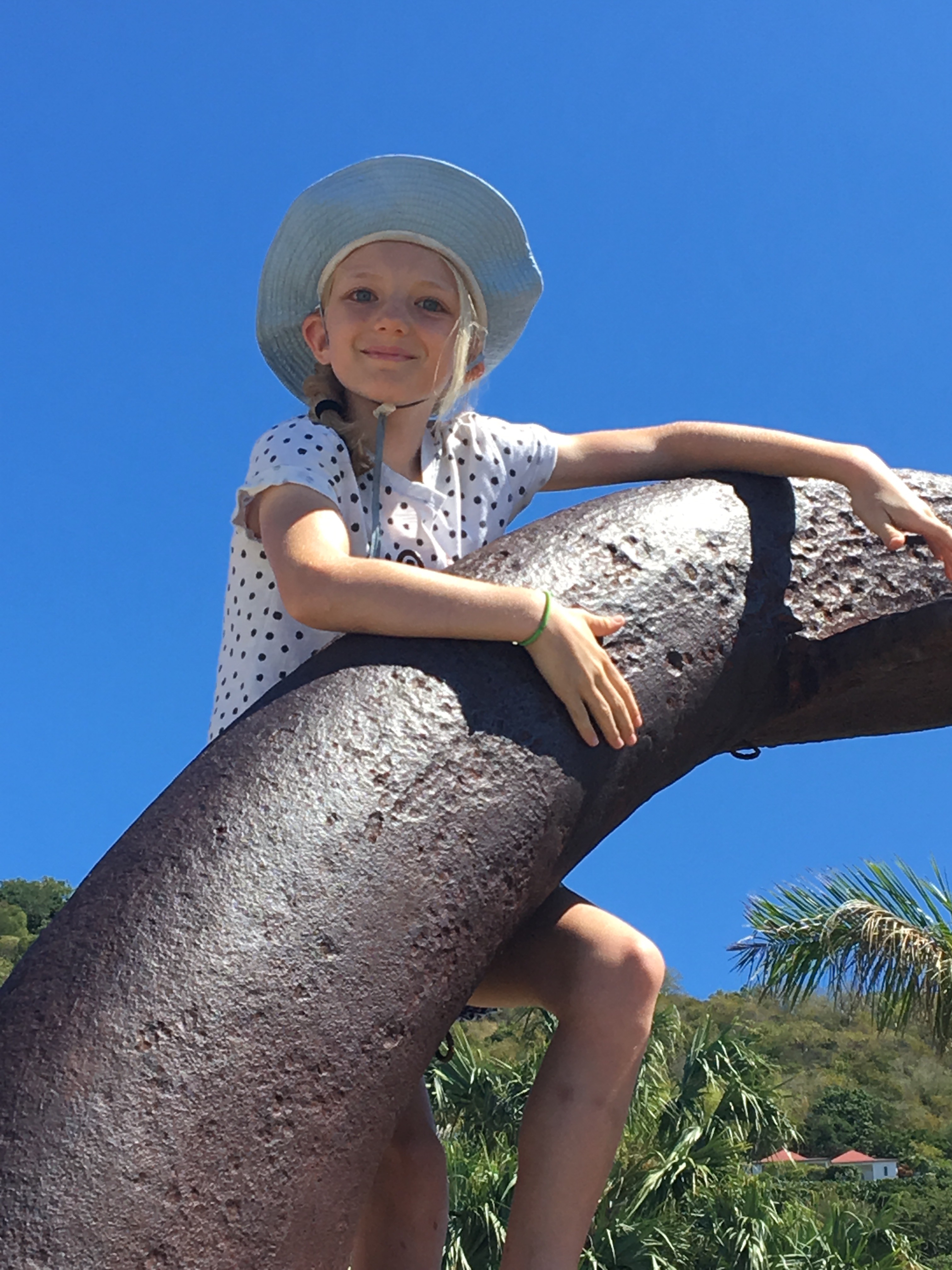 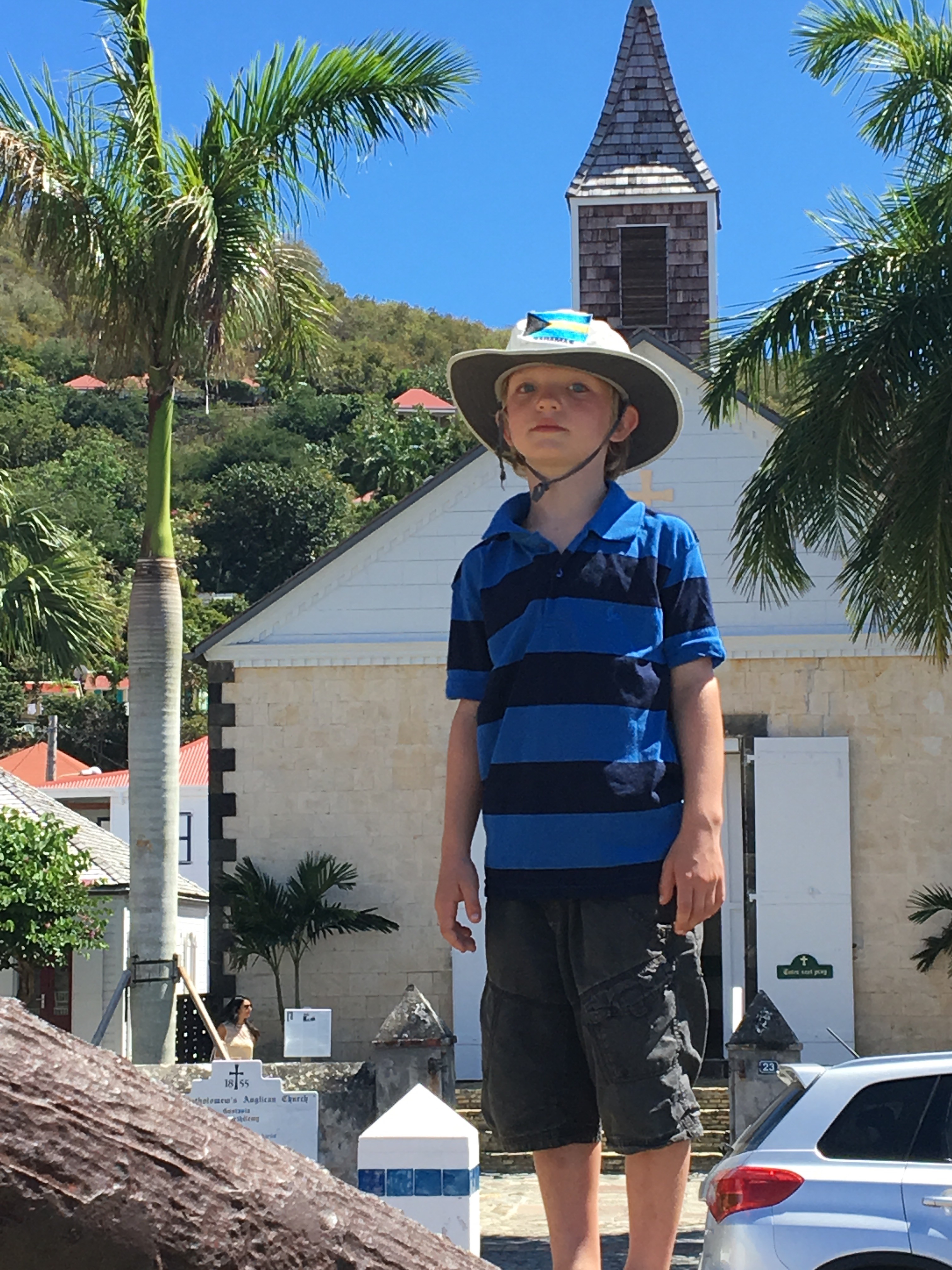 Now today we set off for St Kitts. Lovely day for a sail. The wind threatened to die off once but we willed it back and all are happy. Truly this is what these days are for…