There is much to love in Miami. That is a rather unsuspecting comment coming from me. I understand. But oh how true. Now granted we did get five kid free days after many 24 7 weeks.  But even still.

Music in the streets? Check. Art? Check. Interesting architecture? Check. Hotter than a sauna? You got it. There is the appreciation of culture in simply walking about. Want to grab a Cuban (sandwich that is), walk two blocks one direction. Want a Peruvian dinner, walk two blocks the other direction. And who would have thought that the food in Peru is more desirable to my children than any other ethnic food.

We are working on our Spanish. We all know how to say that we want a free cat please. May not seem particularly useful but you’d be surprised. Listening to the radio in Spanish is an odd form of elevator art. At some point all of these quick random expressions will click and find themselves understood and ready to be used… I also realized that I can say:  I do NOT want a free cat please. Uber has been very useful when not dinghying around. (That may be my favorite sentence). With a quick tap we have found ourselves in many very different neighborhoods:  South Beach (yes you can park your python outside a store while you run in), design district (a day of elegance and inspiration), and Little Havana (kids playing dominos at the Ball and Chain while we watched the band play). Sharing or car pooling an uber brought us into contact with some very interesting and interested people. 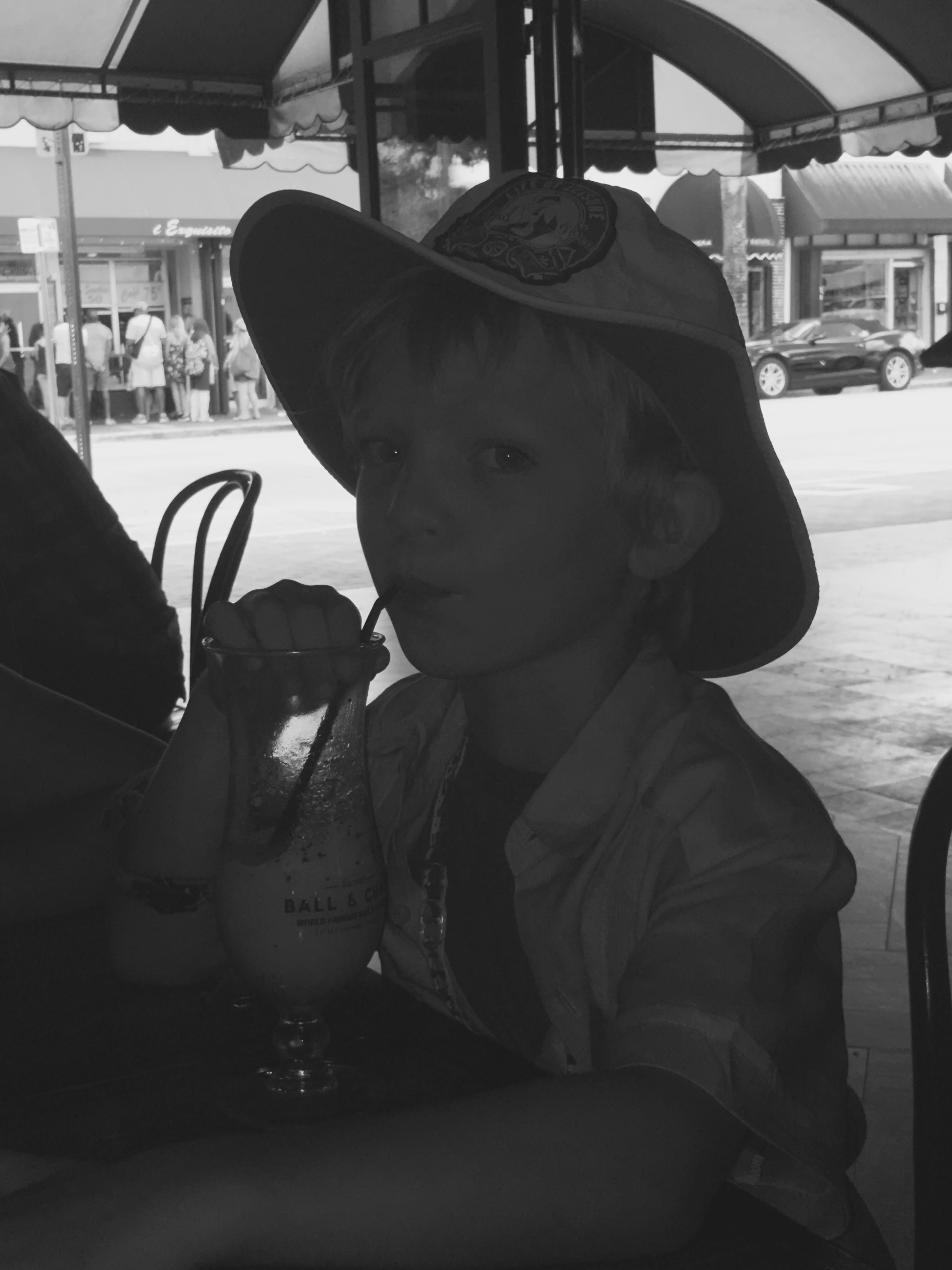 On Wendy’s last day in Miami we did what most people do. We told her to take an uber to the airport from Fort Lauderdale and take a sail with us. We left late in the morning and I don’t think anyone was quite expecting the channel. The wind was on, about 15-20, so we knew we’d be in for a quick ride. That may even have been how we presented it to Wendy. The exit out of Miami is through a narrow section that when we entered the prior week featured maniacal motor yachts with little regard for their wake or path for that matter. But the sea state had been calm. This time was just a wee bit different. With the skinny channel and the force of the wind and current, we had standing waves. As in storied standing waves. As Justin maneuvered Madame Geneva over each crest trying to avoid the firm crashing as the hull stretched out and then over the rising waters, we found ourselves rather tightly squeezed with a rapidly approaching container ship and a slowly, teasingly hovering marker. The ship was flying into the channel, much faster than we thought when we came into the narrowed pass.
Life jackets on, the kids were held in place partly by gravity and partly the way your mother used to keep you from slamming through the windshield on an abrupt stop. Plants went flying (relocated prior to this journey to the transom bench) so soil was everywhere (yes I know…hydro is the way to go).

I had stowed everything below before we left as I knew we were going sailing and we had already eaten the cracked watermelon that I had forgotten to stow as we were motoring through the harbor.  A later assessment of the cabin met with a fallen sugar canister (read lots of sugar all over the stove) and a rather wet companionway as there was no way to close that hatch and hold the kids!

We veered out of the channel as quickly as possible, moving from 50 feet to 15 feet of water. Not ideal for waves but definitely for traffic. Justin met with each rise and roll, steering viciously. There is a point as you ride over these waves that you lose steering so the make up is fast and furious. The captain had all under control but man was it exciting.

Unfurling the jib eased the roll on Madame Geneva as we moved up the coast. The intensity calmed but was not exactly erased. The waves continued to climb, over 10 feet, so that you could see the sunlight through. The crashing was gone though. We set one of the potted herb collections free, its pot in large terra cotta shards, and watched as it carried over the swells. I swept what I could and when the waves truly eased into a more suitable roll, Justin sloshed the cockpit with buckets of seawater.

Remember Wendy?  We told her it would be a quick sail!

The cut to Fort Lauderdale was much easier with the current and waves in our favor. We found our way through to an even smaller cut to get to our destination (Just Catamarans for the haul out). No one answered the radio so we just decided to tie up at the fuel dock at Harbour Town Marina. As fortune would have it that was where we were supposed to be. As AKB says “of course it was”.

We spent one night on the boat and then I took an uber with the kids to the hotel in Fort Lauderdale. Justin stayed with the team at JC to provide direction on what repairs and joined us later. Our confidence in getting Madame Geneva the love she needs is great. Already they have remedied the situation with the generator and when queried on the misnomer, the French worker replied, “What we can do with two, we can do with one.”