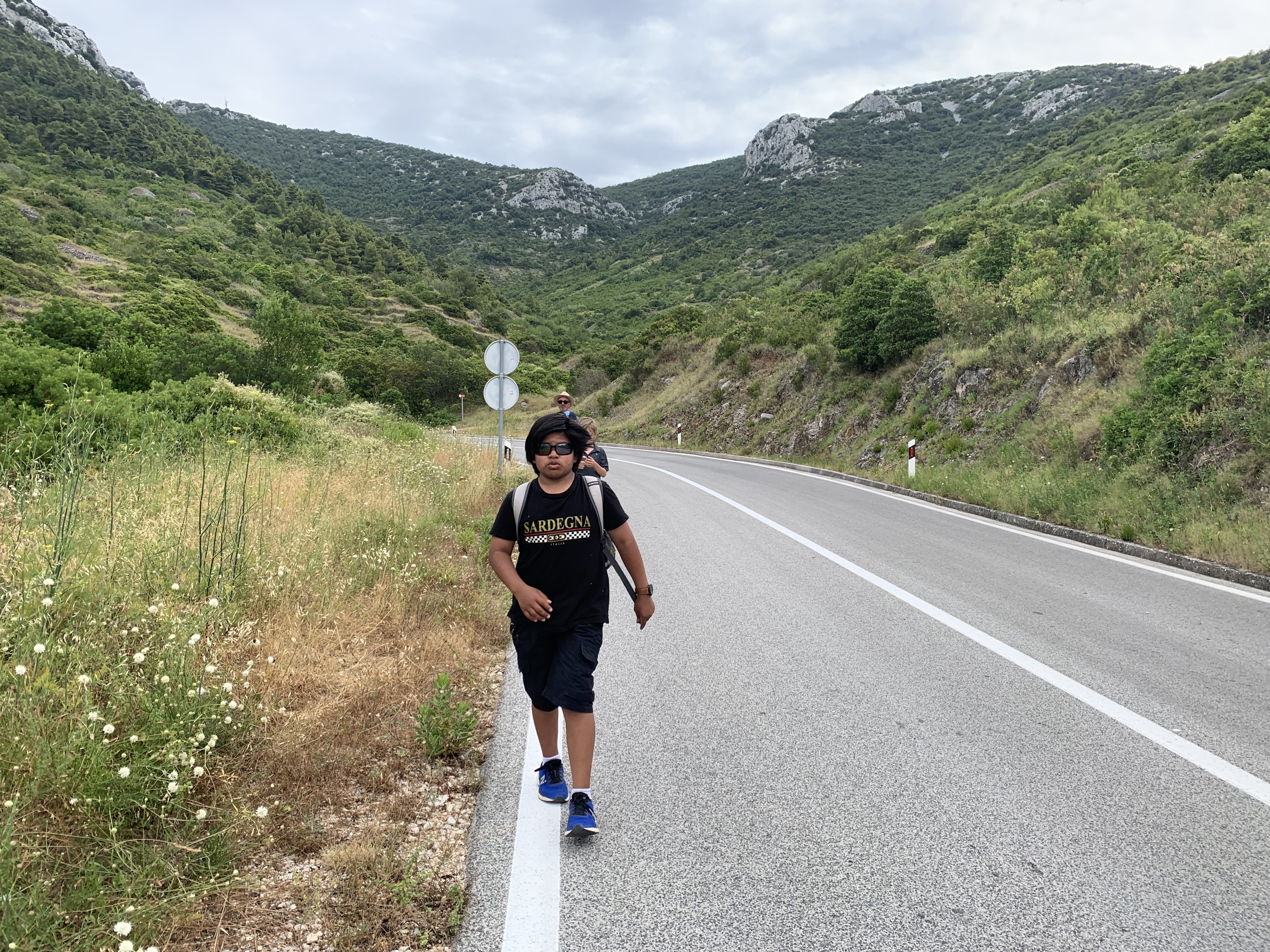 Haven’t written anything for the last two weeks (by the way we were banned from the rest of the trip). That was a big mistake because as soon as I got to my home screen it started spamming me with updates, offers, and other wonderful things I could care less for. Anyways I am going to write about what happened one day ago. So, about a week ago we met up with some of our friends (also our neighbours) and they got to stay on our boat. Skip ahead five days later and we needed something to do for the day. The anchorage was a huge bay with beaches on the shore which were divided by some houses here and there. Above the town there was a bunch of vineyards and farther up there was a church. Towering over all these subjects there was a huge mountain. We planned something and with our friends (their names are Brandon and Lisa) we made our way to the church. It wasn’t far and along the way we saw cats, dogs and cicadas. Sadly, one cat only had one eye; it was a black and white cat. It was also very small, and it wasn’t with any of her or his parents. We passed an alley way that had a mom cat and her kitten. We were just about to pass it and all there was a loud shrieking sound coming from the alley. When cats want to, they can be as loud as dogs which is very annoying in a house. We walked past them and started to walk up to the church. We pasted tons of vineyards and came to a sign that said the church (Saint Nikole) was a little bit to the right. When we arrived, we started to look around and it was cool. We walked up a steep driveway. To the right there were two rows of glass and stone graves. One had the bible made from stone. Also, another one had a small glass rose sitting in front of the tomb. Someone was around 96 when he or she died. Then I think Mom and Dad took a picture of what the church looked like because I am really rushed right now by Mom to finish. 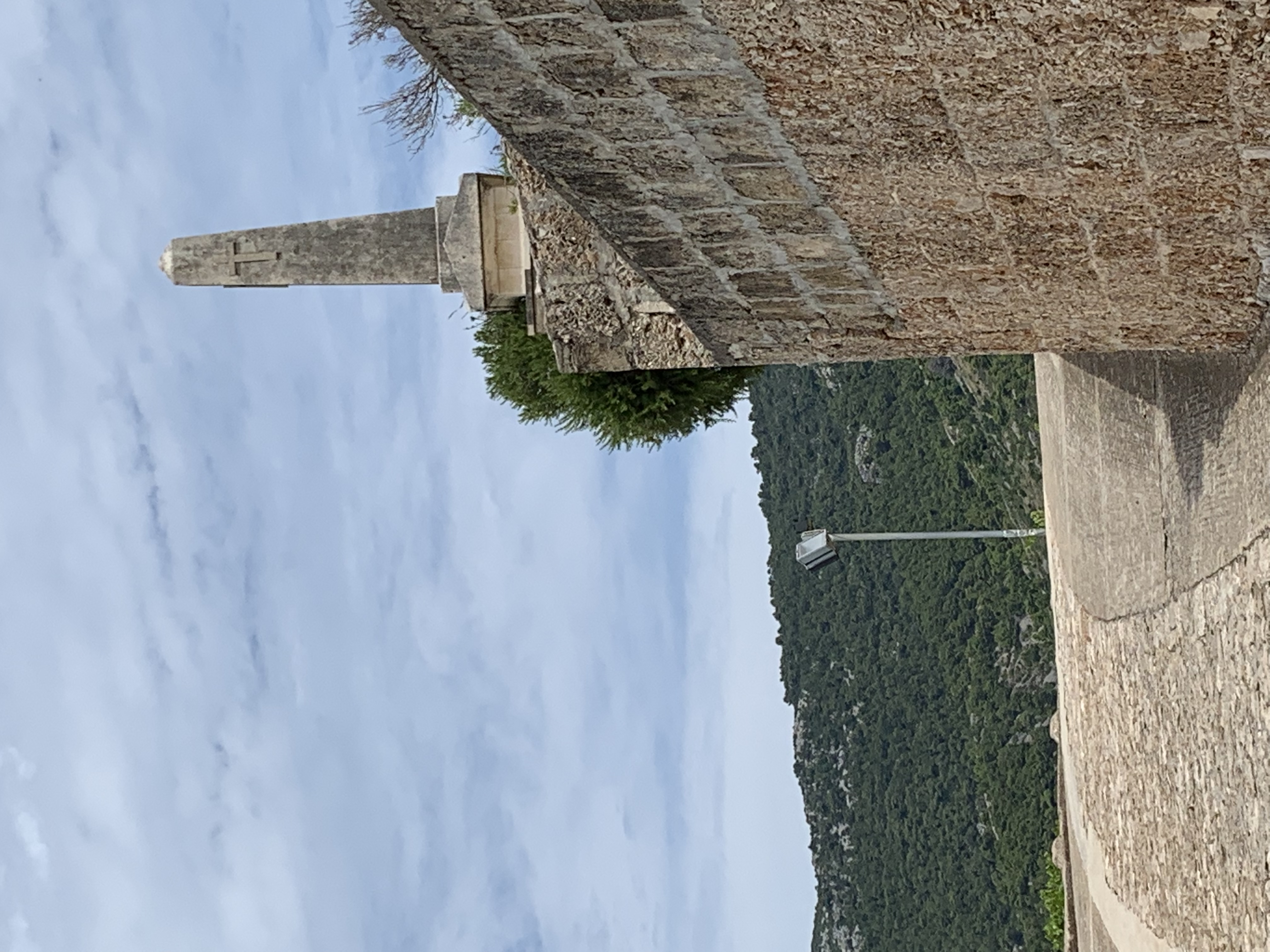 We walked up a rounding road going up the mountain and stopped at a road that has a little split. We were very high up already, but we decided (by “we” I mean Mom) that we should go farther up. Bradon and Lisa didn’t want to continue and were joking around that they would rather sit under an umbrella and eat cheese and drink wine. We split up and as soon as we were about to continue a taxi came by. Mom and Dad flagged it down and said that we needed a little ride (NOT TO THE TOP) to a trail to go to the top. We got in the van and went to a trail that lead to the top of the mountain. When we arrived, there were steps to the right and the man said to take them to get to the top. We paid and started our walk to the top. To be honest I forgot how long it took to get to some caves called Tito’s caves, but it took a while. The caves were small but went far back. There were two and a big man-made stone wall in front of them. Dad said it was a good place for soldiers to camp out. Not the kind of camping out with marshmallows and sleeping bags BUT THE KIND THAT YOU NEED TO HIDE TO SURVIVE. 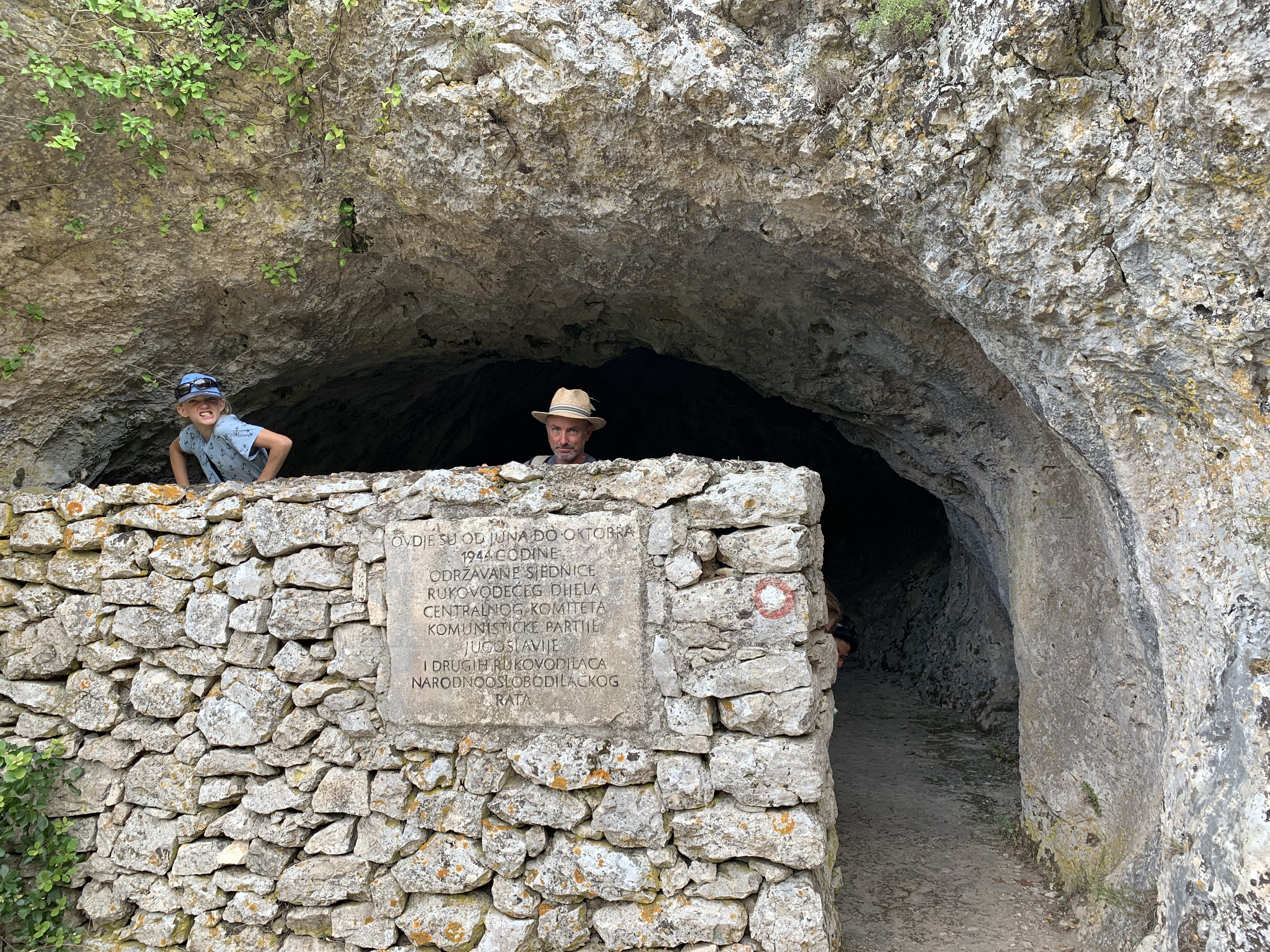 Anyways, we started to walk again when Dad looked up and saw a huge spider web and a huge spider. It is cool how that such a tiny thing can do nothing but produce silk from their own… butt? I forgot what it was called. We started to see tons of spider webs and one we saw was in the middle of killing a fly. Precious.  After another long successful time trying to not slip on rocks, trying not to go on the wrong trail, and not dying from heat we finally made it to the top. It was an amazing view of the town and the bay. Across the bay was a long and tall island that had a population of 11 people. They must know each other well there. We were going to walk down a steep and rocky trail but then a group of people started to talk to Mom and Dad, and for anyone who knows my mom and dad and how they love to talk well us kids had to sit through that. After Mom and Dad talked to them, we and the group of people said goodbye. The weird and awkward part happened after, we started to walk RIGHT next to them for a while. It’s kind of like saying goodbye to someone in a store and seeing them every aisle. I haven’t been in this situation, but I know someone (or something) out there has.  We found the trail, but Dad got stopped by the person that was leading the people and told Dad this. Make sure your kids don’t step on mines. And he kept saying that for five more times. We made our way down the mountain, and we followed the arrows warning us about mines. 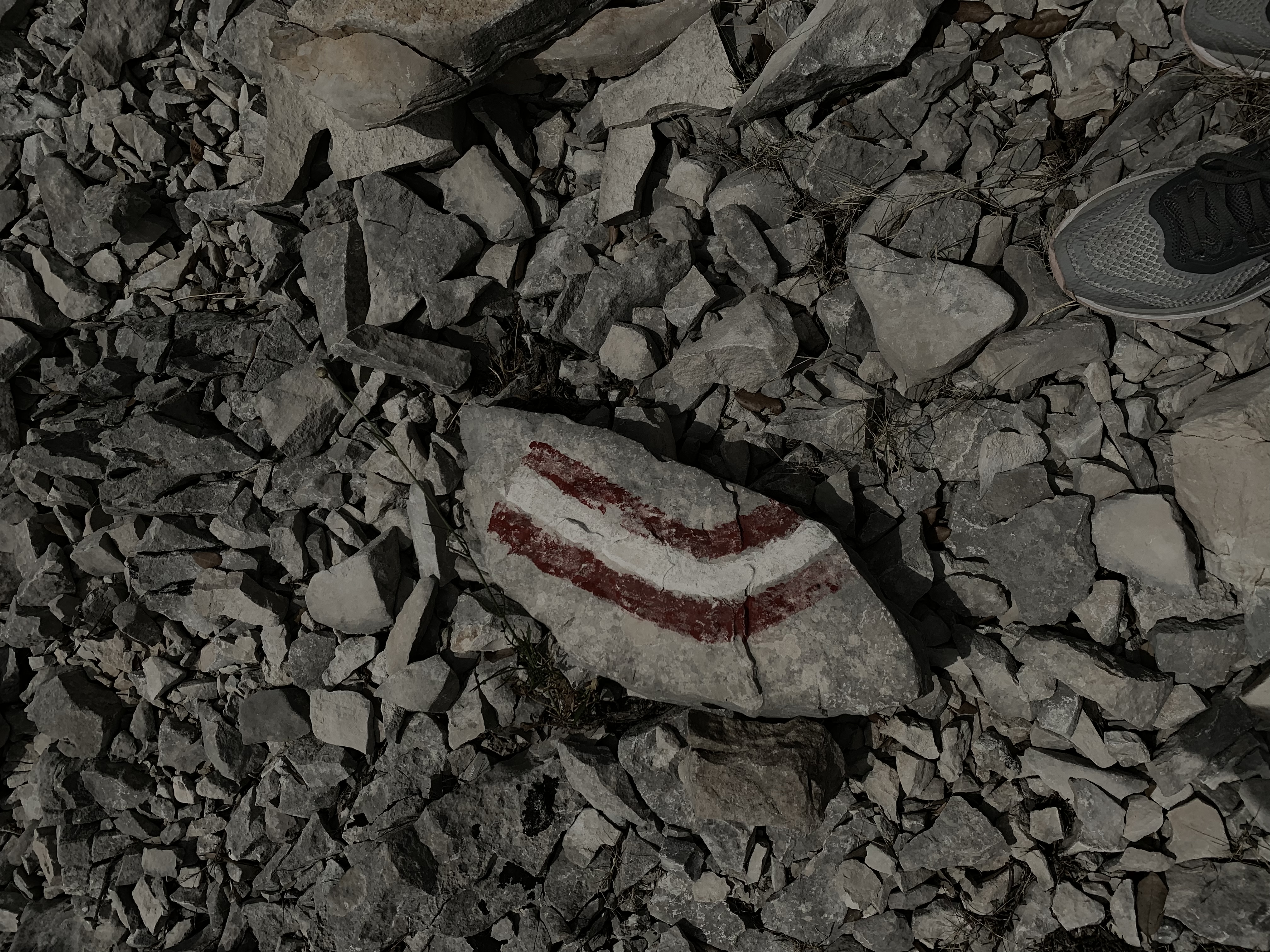 Quinn got paranoid. Gherty and I fell, tripped, and we got scratched by thorns and rocks. We finally made it down and the trail ended by a road. We were still a long way from town and my forehead was on fire. We started down the long and windy road that lead into town. After about forty minutes we made it back into town. We basically ran down the road to get to sea level. We found a café and slumped down into the chairs. Exhausted, we got a drink and some food. We picked this café because we didn’t see our friends so we decided to stay at a place that we were sure they would see us. It turns out they were out at the farthest beach, fast asleep for (I’m not sure) thirty minutes. We finally met and went back to the boat. Since this was a while ago, I don’t recall what happened when we got back.

So far in all the blog I have written this is by far the longest. This is the longest one I have ever written and it is the last one I will be writing for a long time. The shortest was properly around 67 words. The good old times where I didn’t know how to spell dolphins. When we get home, we will probably be jet lagged for a while, but as soon as we are out of that state, we will probably go by the store called Bert’s. Anyways I need to go help everyone with a lot of stuff. And this is now were I leave all yall. Farewell, adios, and goodbye.