From Giardini Naxos to Siracusa is a short sail. A few hours steam south in glassy flat waters. No high drama or heroism but some excellent dolphin show swimming on the bow and Italian Navy patrols keeping a keen eye out for overloaded migrant smuggling boats or American sailing families. We were spotted but not hindered in our stealthy quest for pasta and aubergine companata nor did we encounter any migrants. 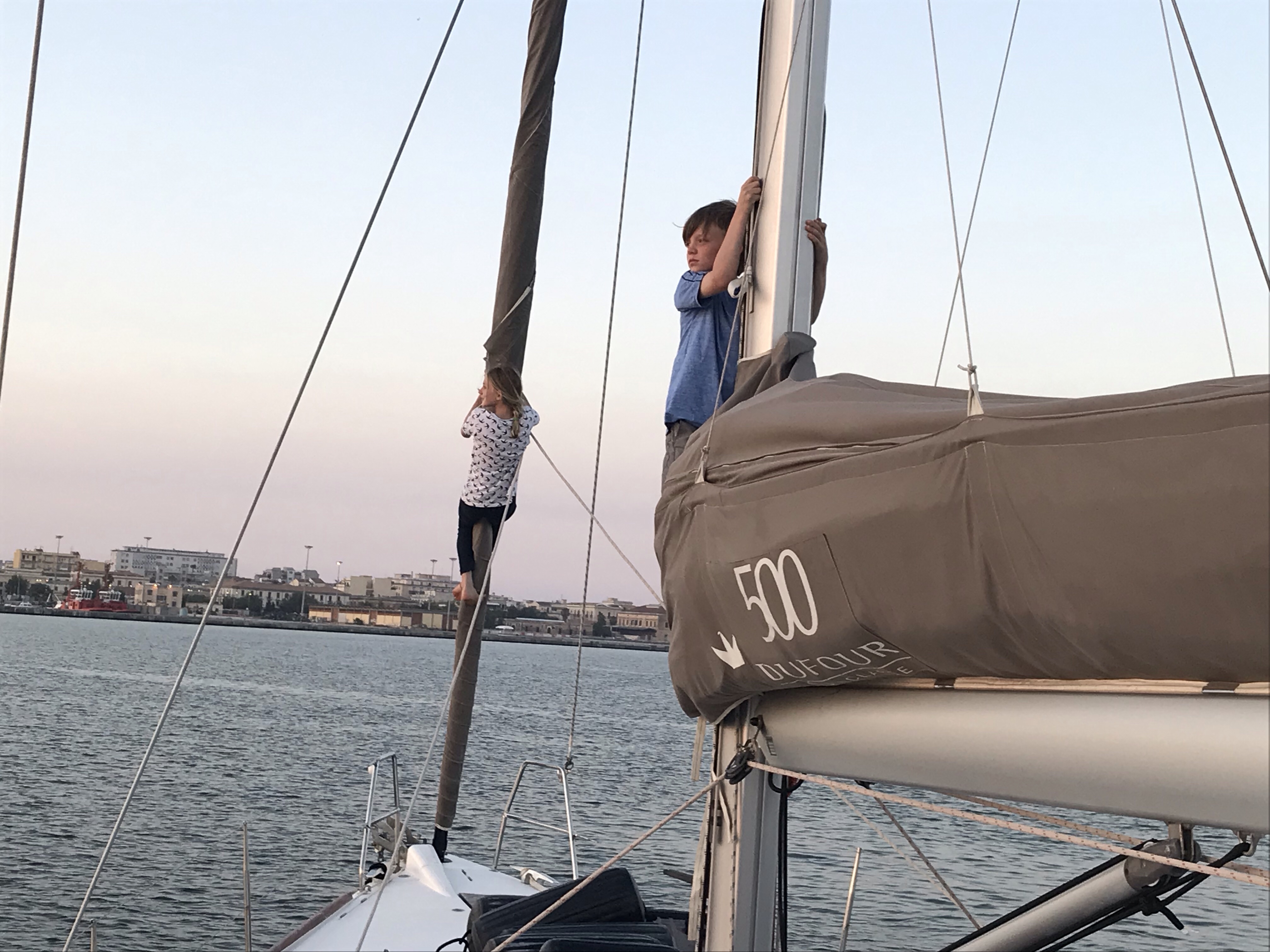 After watching Mt Etna from our cockpit in the bay pour red hot lava for two consecutive nights I will admit that the bar was unfairly high for Siracusa. Fortunately we have a knack for introducing drama into innocuous situations at times so as we steamed south closely eyeing our fuel gauges not entirely sure we had enough in the tanks (and certain that the 80 extra liters we carry in cans on deck were empty) we grew less and less confident we were going to make it. Zero knots of breeze slowly grew to 5, then 10 then 15+. Engine off, sails up, we tacked (that’s right cruising sailors, Tacked!) upwind into Siracusa harbor and anchored in a beautiful spot amongst 20-30 traveling boats of all sizes. The water was a vivid green and the city looked spectacular. The farther south we travel the more the architecture takes on the sandstone colors and the moorish Arabic mashed with Roman, Carthaginian, Greek and Norman details hinting if not screaming the chaotic and bloody history of these ancient cities. Modern glass juxtaposed with baroque cherubs. Halal shish ka bab next to tourist trinkets next to Roman ruins next to glam boutiques next to a marine store with an anchor and some old wires for sale. Everybody smoking. Everybody talking emphatically with waving hands and wild gestures. We saw an African nun pushing a baby carriage. We saw women in stiletto heels, smoking hand rolled cigarettes at 1 AM….pushing baby carriages. We saw a baby pushing a baby carriage. This place is fantastic! 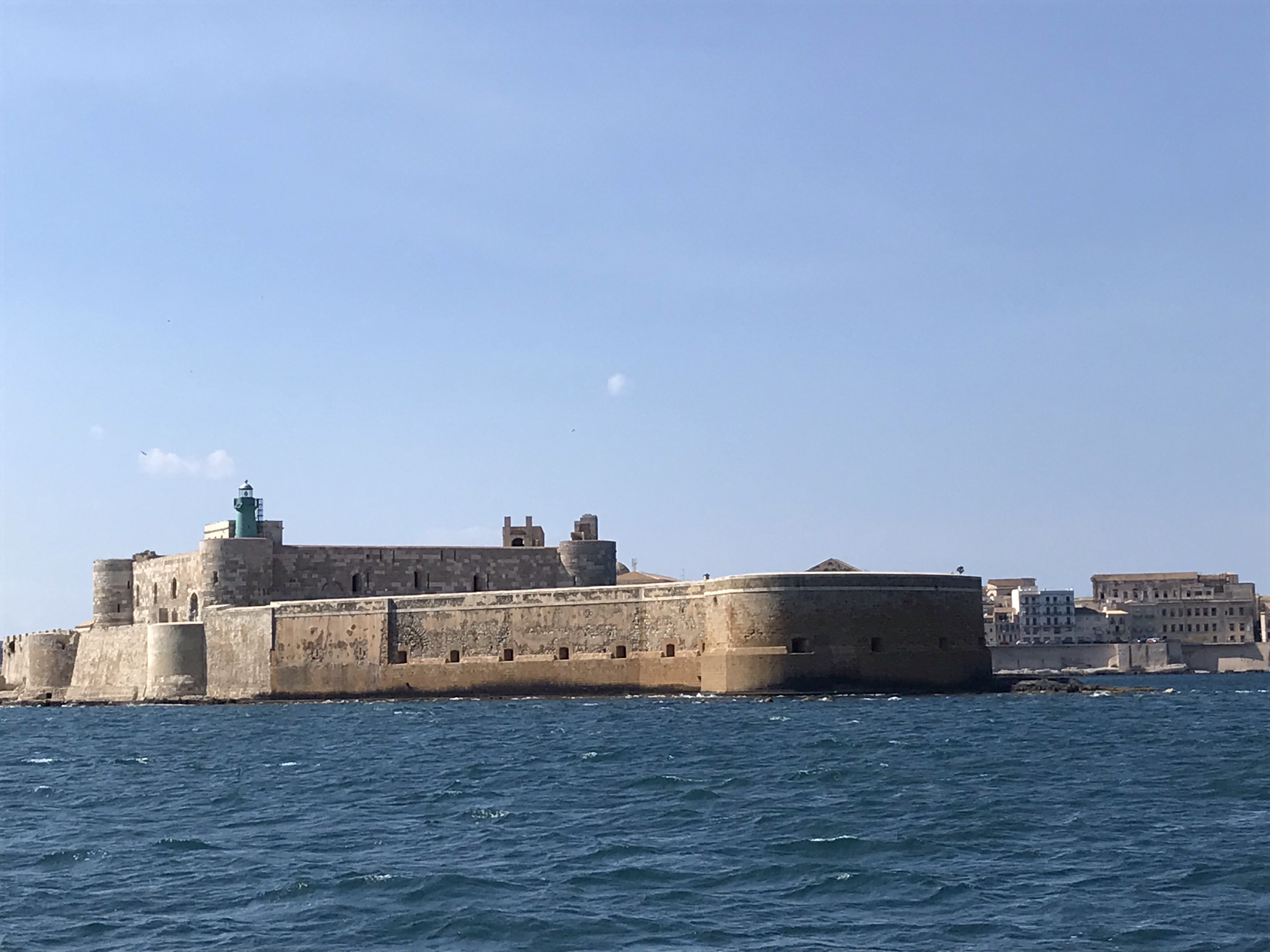 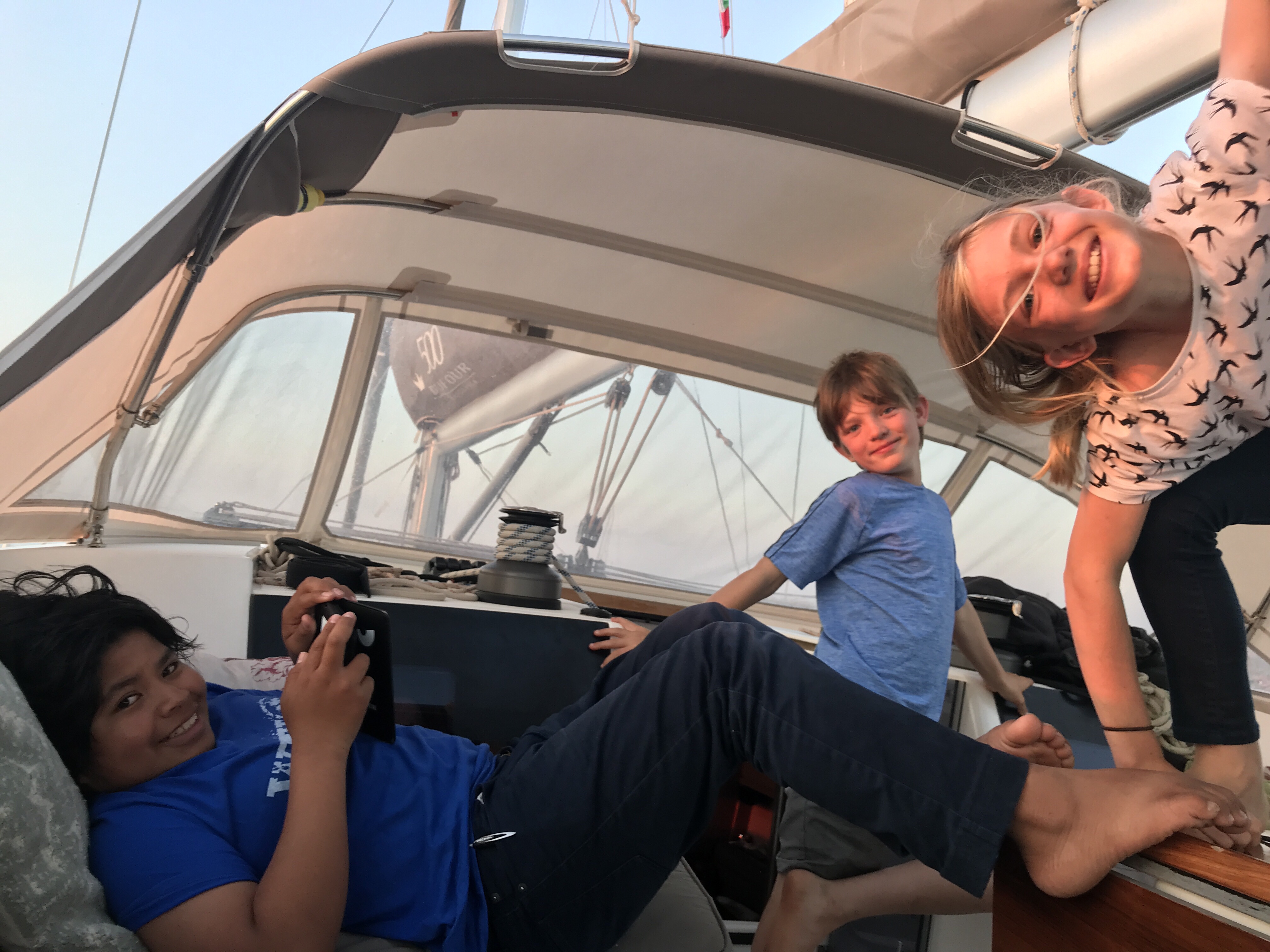 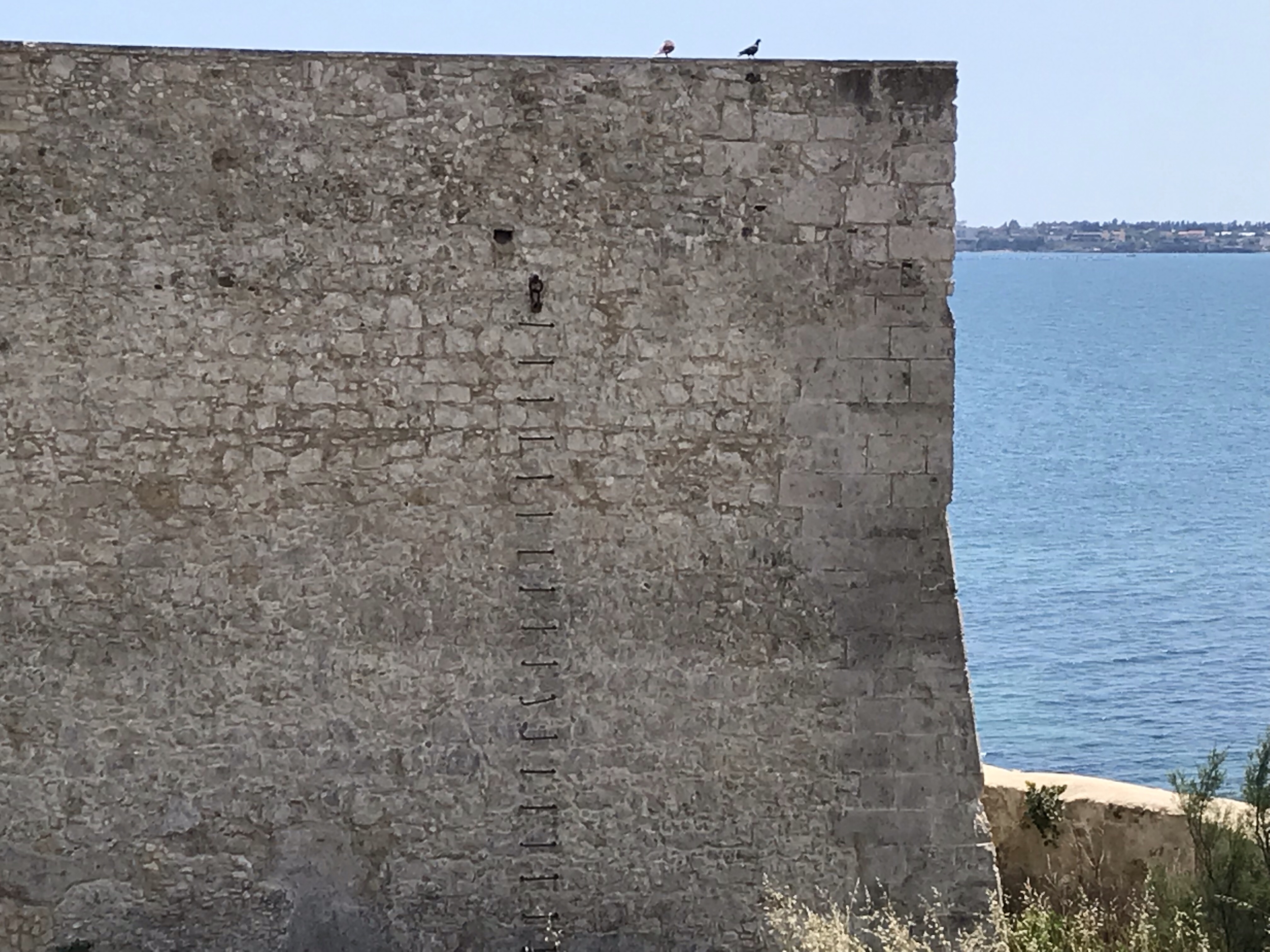 The city is simply amazing. The MG crew met up once again with Justin Ruggieri and his clan for a walk about in the 2500 year old Greek theater and caves. We looked into the slightly younger (and much bloodier) Roman theater and caves. We explored the “Ear of Dionysus”…..a big cave. I am so grateful to have had the chance to get together with my oldest friend, nearly 42 years since we met, in Sicily, with our wives and our 6 children. It doesn’t get much better. 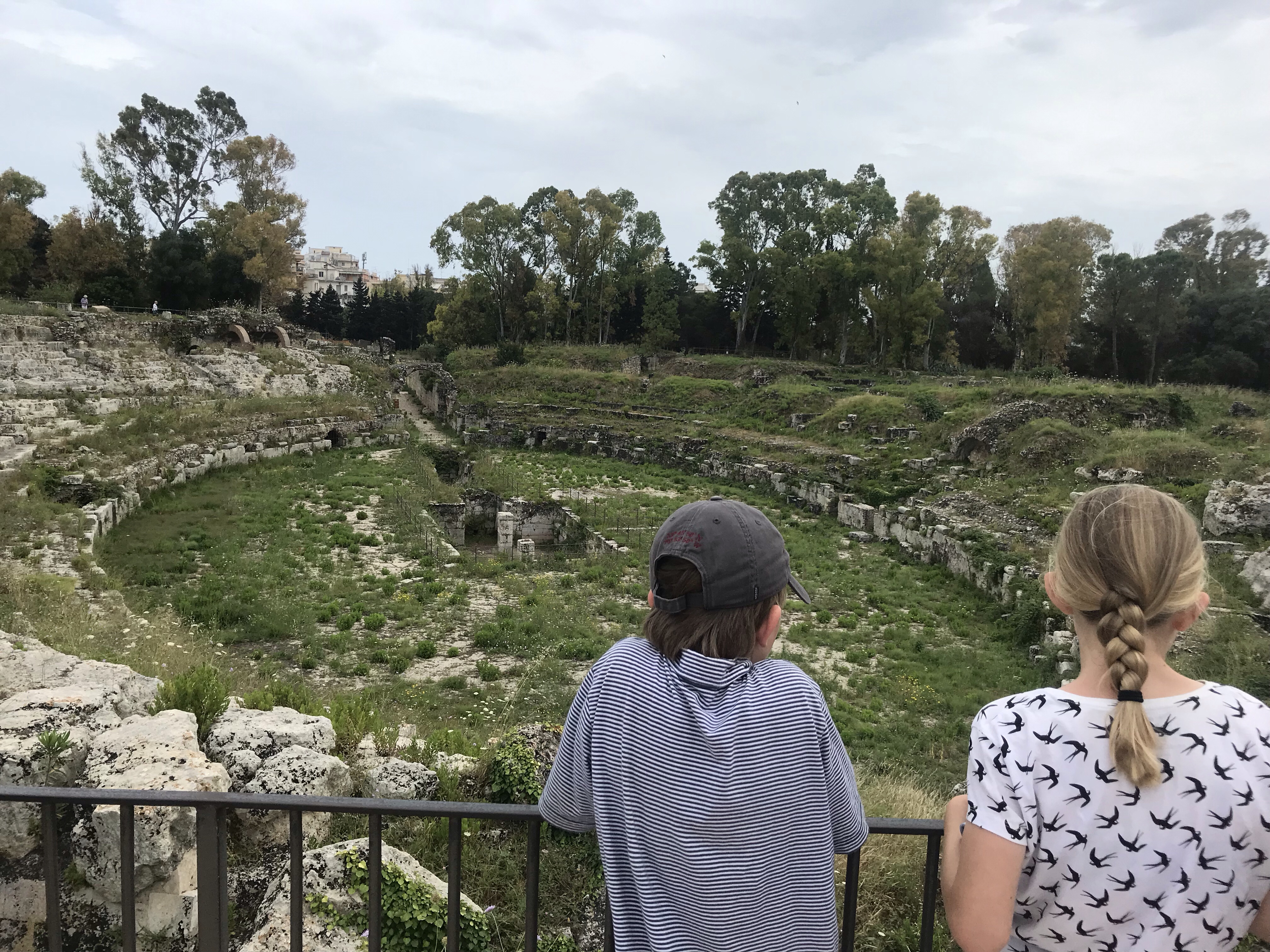 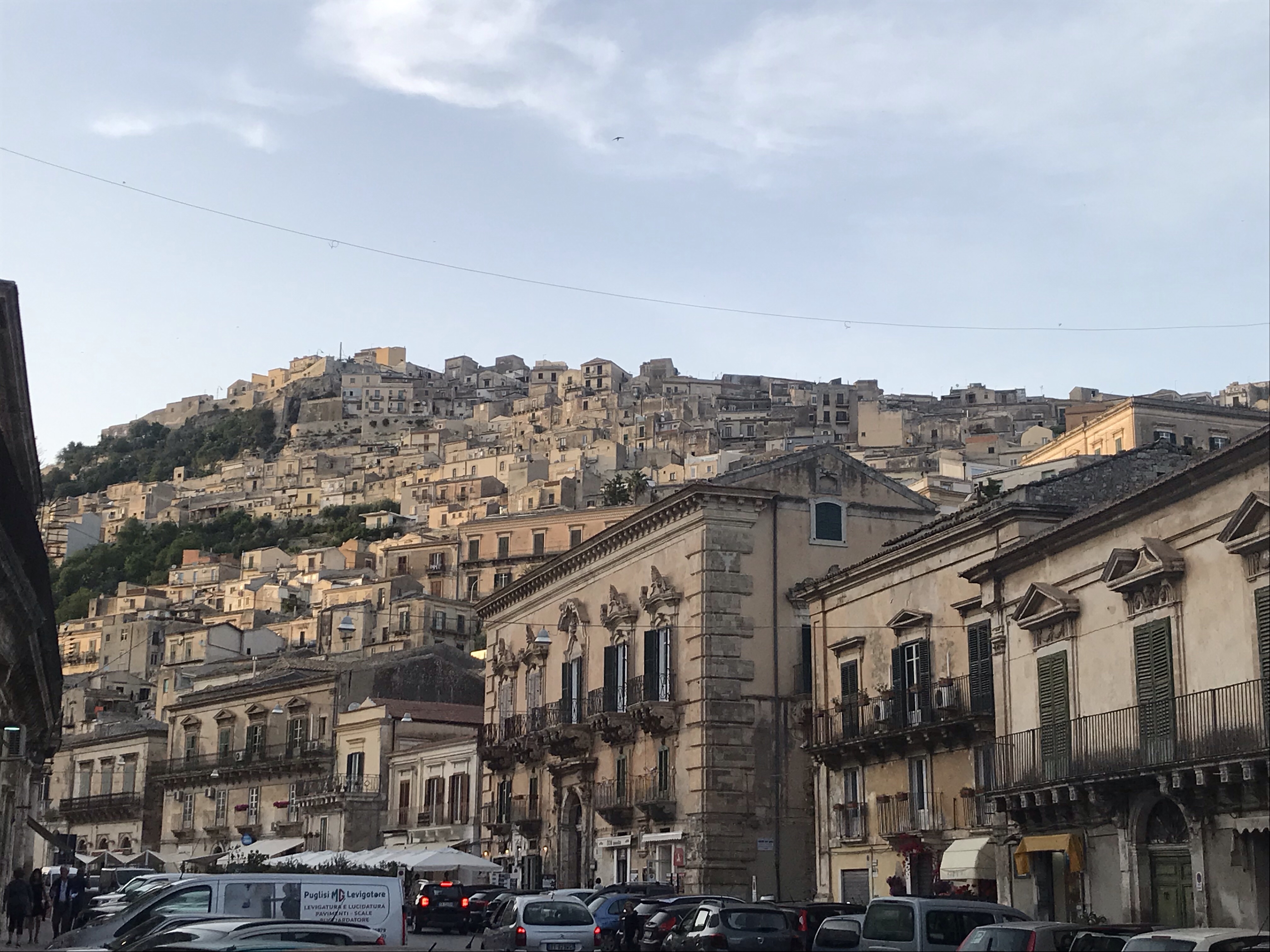 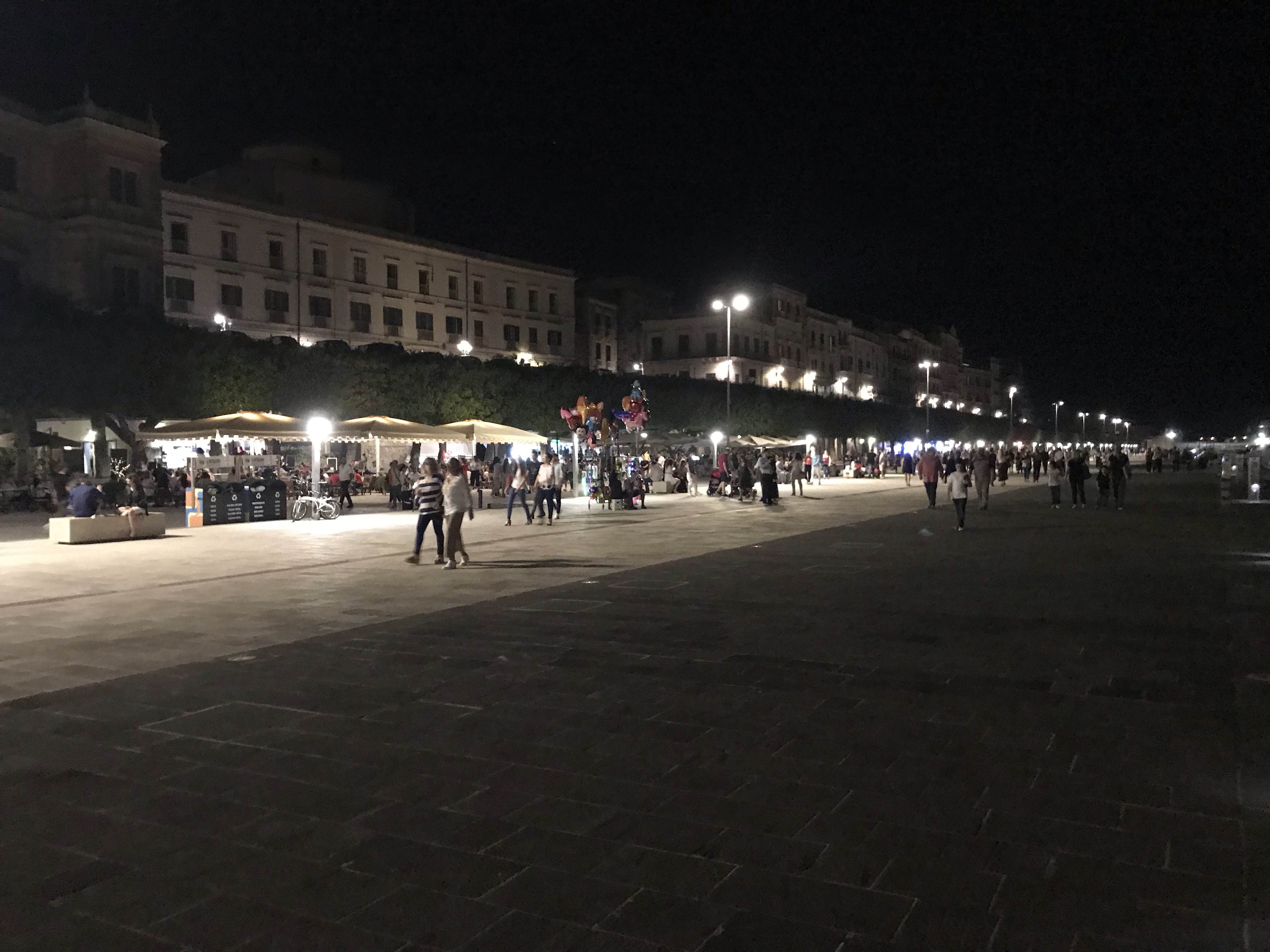 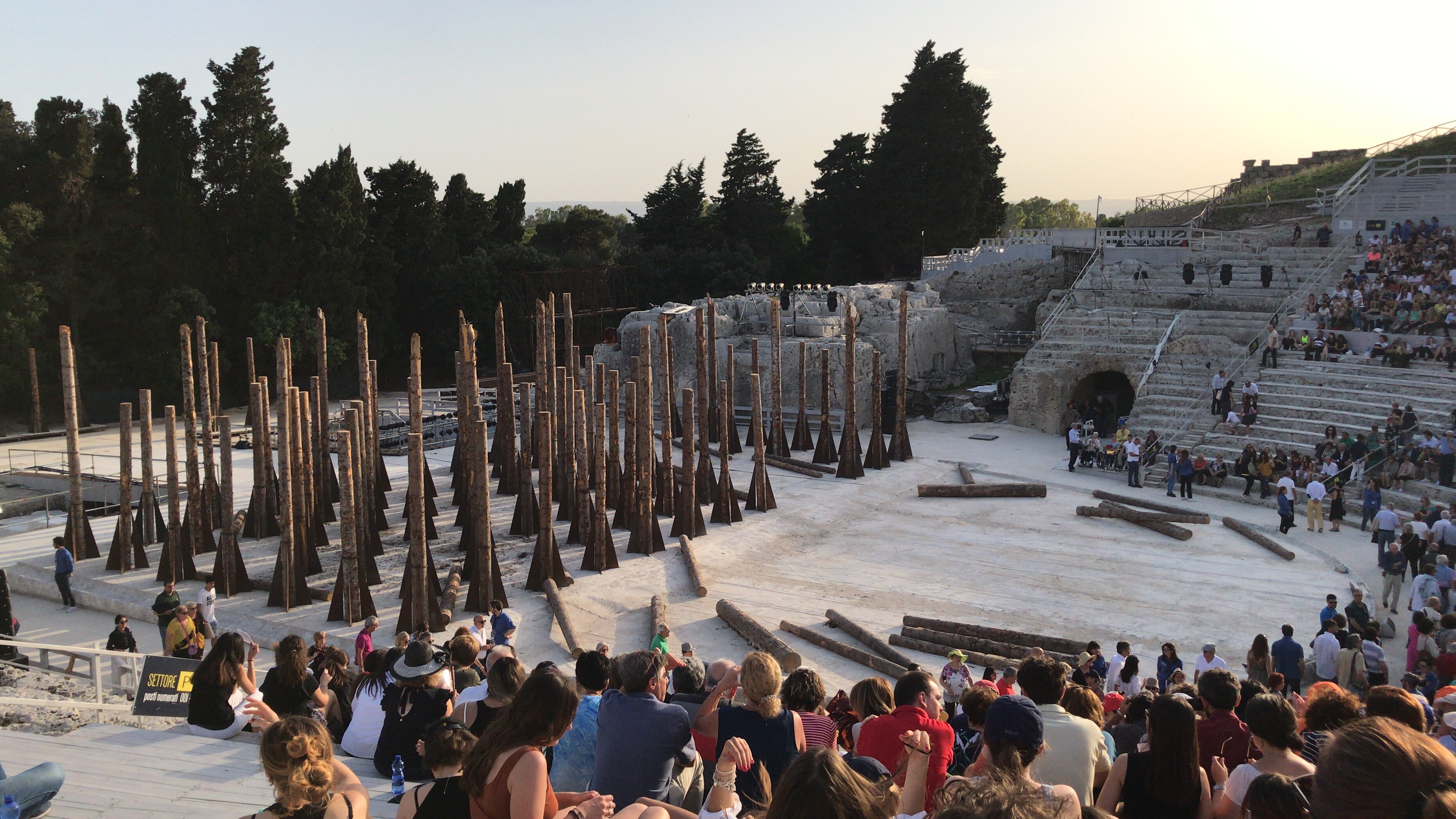 After a beach day south of Siracusa we bid our friends adios (Spanish for Italian goodbye) and headed south, again. Fully provisioned, watered and fueled we sailed to the southernmost point of Sicily and Italy, Portopalo. Here a small islet with a shallow bar carve a beautiful anchorage safe and easy as long as there’s no northeast wind or swell. We anchored in 30 feet on a sandy bottom swam and regrouped. There was a 17th century abandoned Spanish fort outpost now with a lighthouse atop it to port. Crumbing stone tunny warehouses flanking it. On shore to starboard was the small working fishing village with a Moorish Baroque church towering overhead. Yep, architectural friends that’s right, Moorish Baroque, I said that. A beautiful sunset preceded by a chorus of somewhere between 20 and 700 voices coming out of said unique church and dancing across the anchorage for us and the one other boat anchored to enjoy. In hindsight I suppose they would have been singing even if we hadn’t anchored there but it certainly felt like we were being serenaded. It was idyllic. The children enjoyed their friends from America immensely as did we but now it was time to continue this adventure and get our groove back. Here, in this spot on this night with Sicily singing us a farewell, our groove indeed was back. 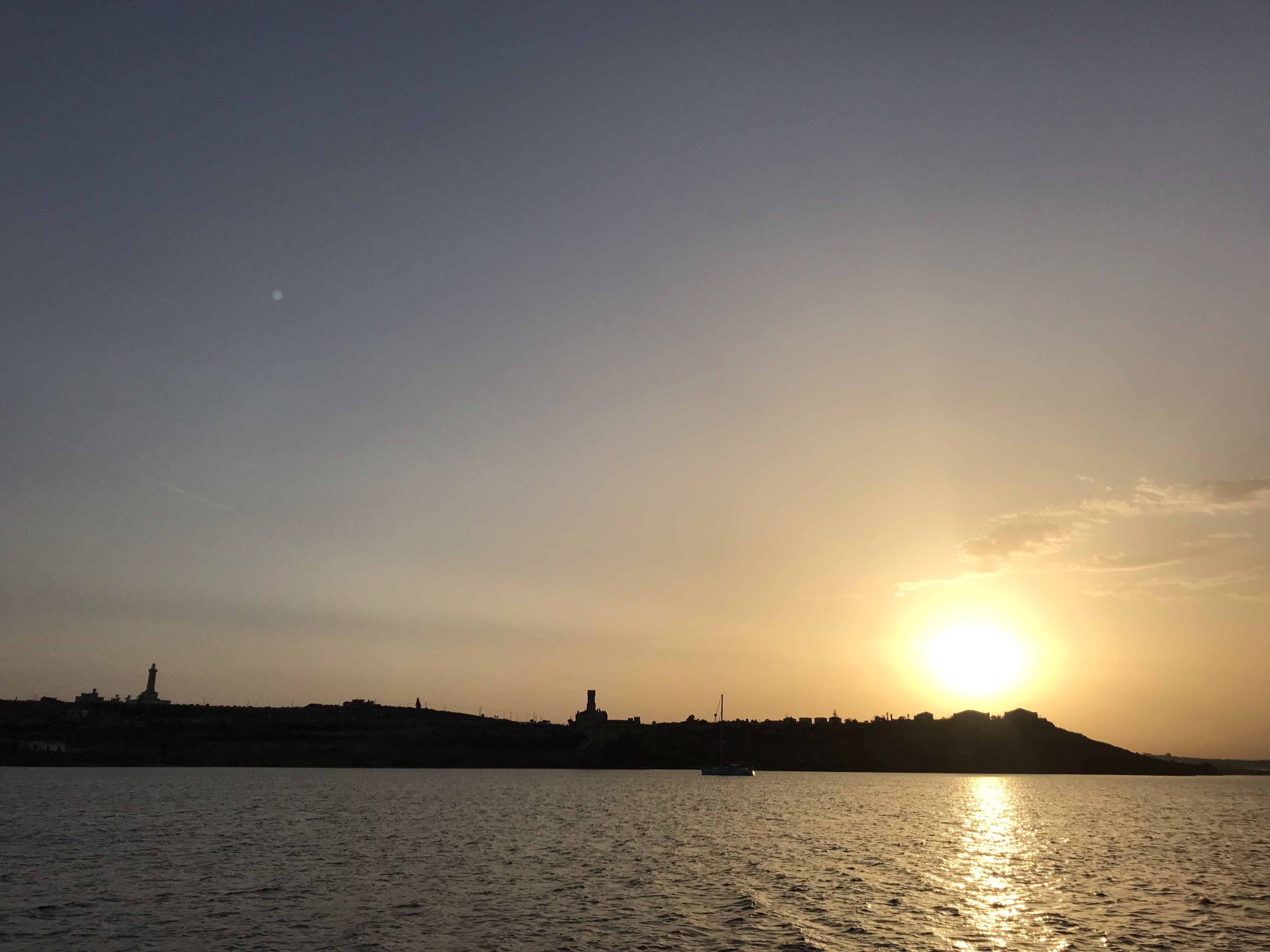 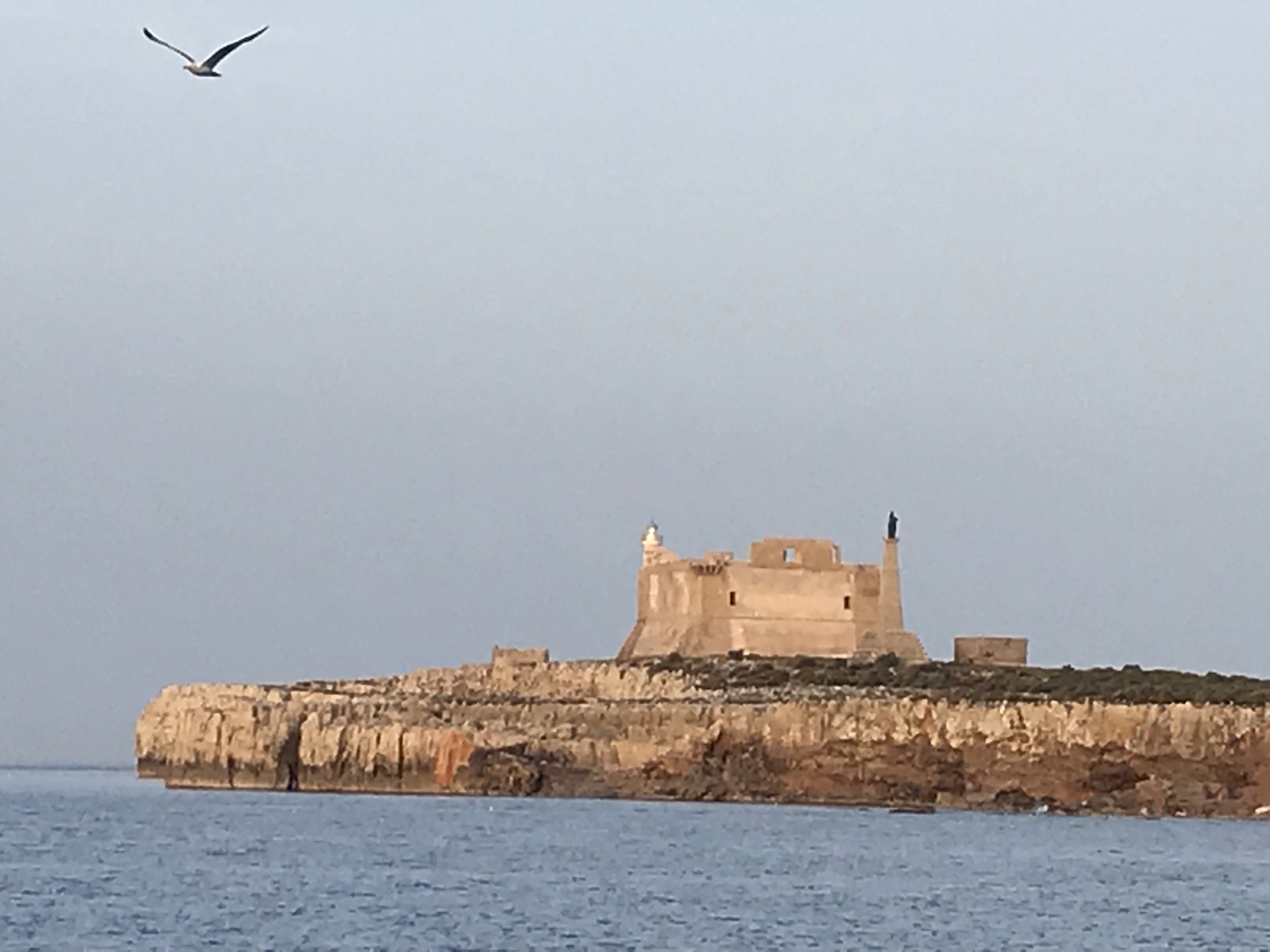 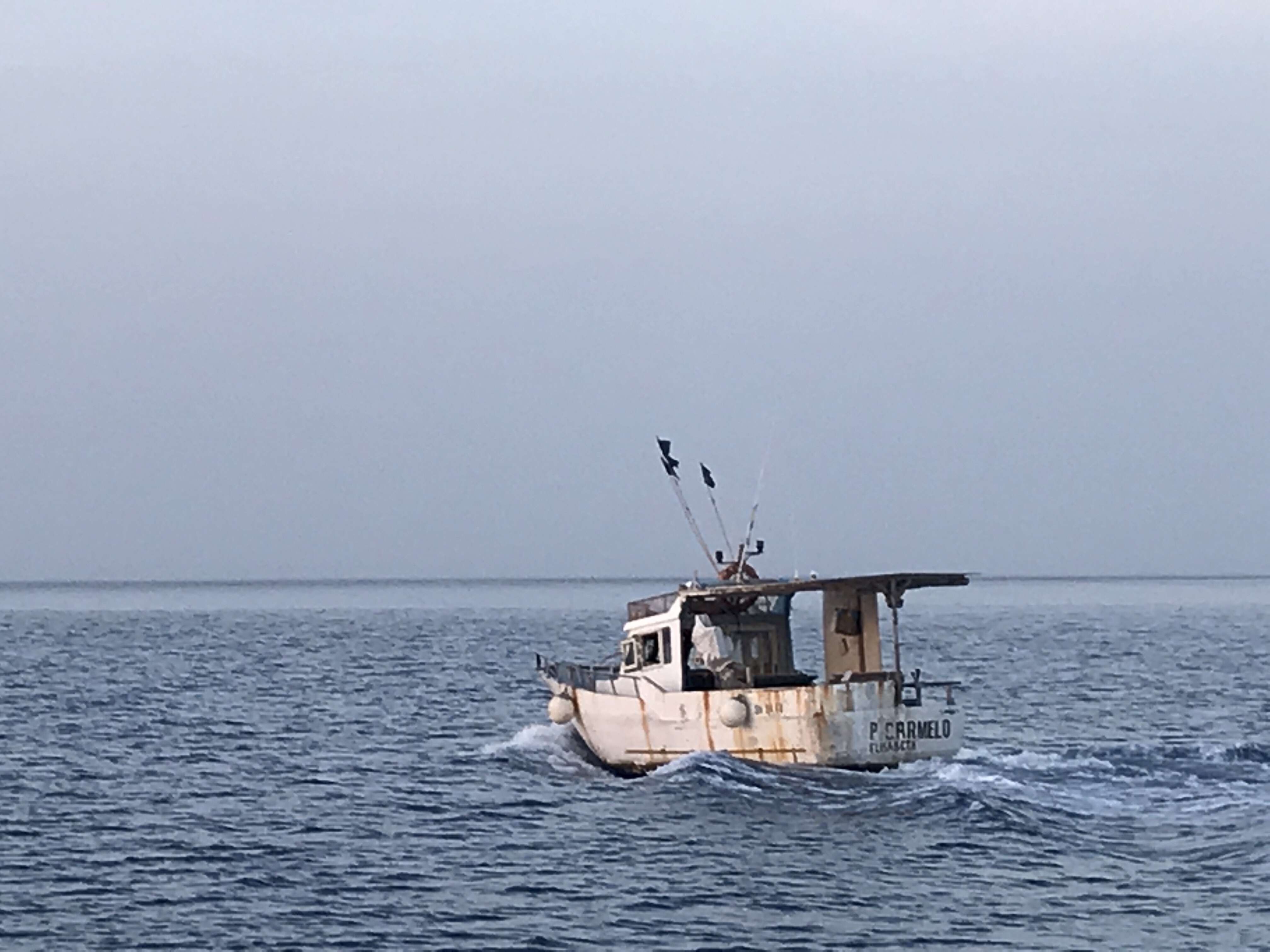 The morning was bright and breezy. Kelly was up at dawn swimming alone off the transom. She woke me to a fresh French pressed pot of coffee, boat prepped for travel and an enthusiasm I would never ask for rather gratefully receive. It was time to leave Italy and head further south. South of Tunis. South of Casablanca. South to country number 23 for our children on this incredible journey. Malta!