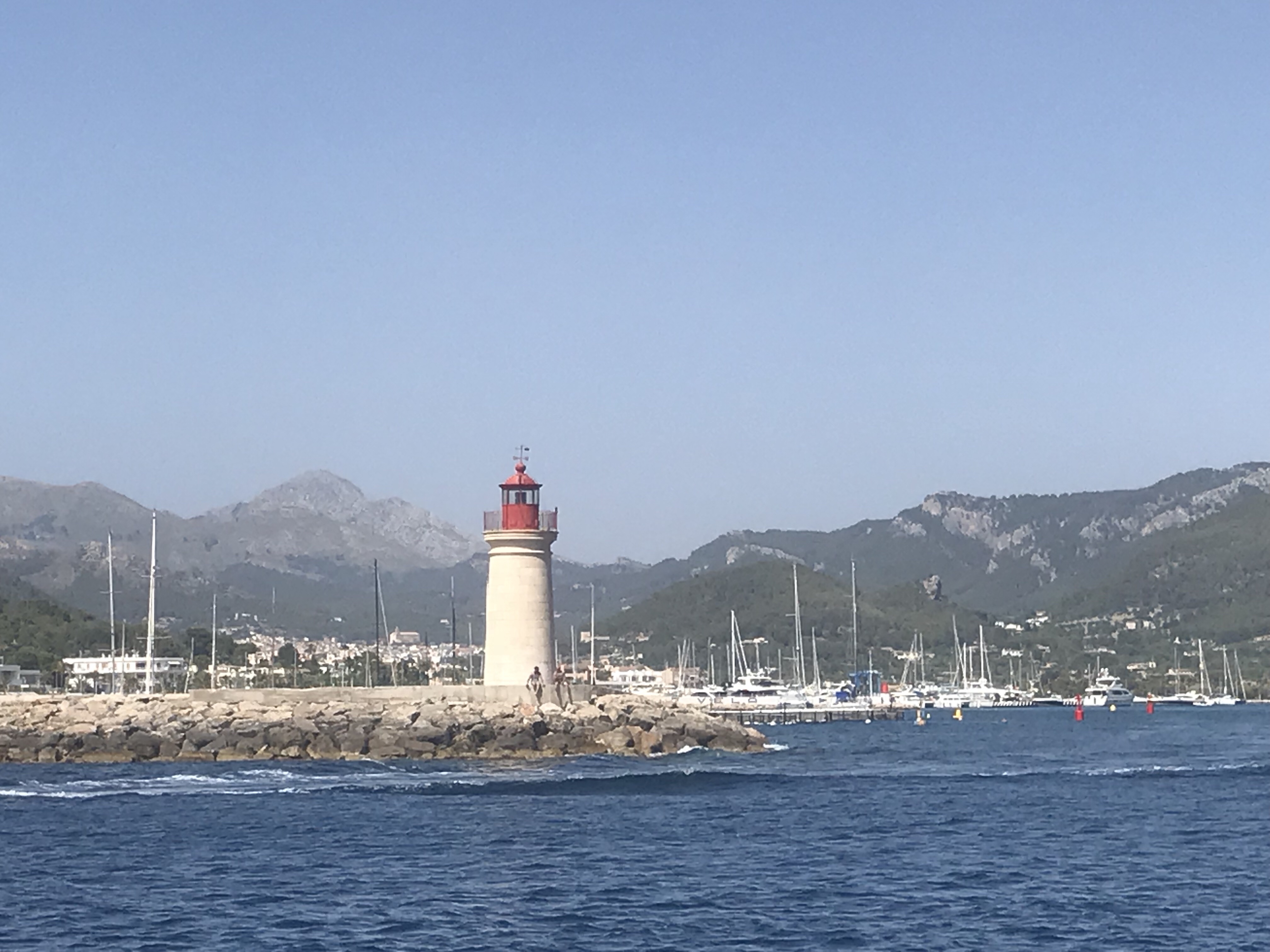 Discipline is both the necessity and the curse of creativity.  Without the practiced pattern of holding yourself to order, the pen slips further from the page and so no voice is heard; and yet with the diligence and dedication to a daily expression, the art may fall flat.  That is a wordy way of saying, “I have been remiss.”

We stopped in Andratx, a few miles east of Sant Elmo, on our return to Palma.  We were hot.  Justin was ready to move, even if only a bit.  And I really suspect the kids didn’t realize we brought up the anchor until the view changed in the ports below, while we were motoring just off the coast.  What wind we had was on the nose so the iron genoa was our source of any speed.  We pulled into the harbor and noted there was no anchorage but only moorings.  Through luck and general shifting of the planets, we managed to secure the only “just now” free one.

One of the big differences for us here in the Mediterranean, aside from the language, the time change, and being pretty much the only American boat, has been the absence of a cruising guide.  The Caribbean spoils you.  The waves and wind may kick your bottom two days shy of Tuesday but when you pull into a harbor or even a new country, you know much of what you are getting.  You have Chris Doyle to tell you what is safe, who is who, and what is what.  And while that is all a guide, and you have your own approach and discretion, there is a lot of comfort in preparing based on others’ experiences.  Obviously, the Mediterranean is traveled but it is simply not documented from the cruising perspective as is the Caribbean.

Andratx proved to be a lovely spot.  We stayed two nights and were delighted to find good food and the World Cup (an unfortunate Spanish loss to Russia).  The kids have been exercising more and more of their independence and staying on board while we pop into a café with a view on the boat and Justin’s cell phone at their ready should they need it.  When giving them the what to do speech (I am big on speeches apparently), they wanted to know if someone boarded the boat should they escape by kayak.  They were not as interested in that answer as they were in the how many scoops of ice cream can they have if they open and latch the freezer properly. 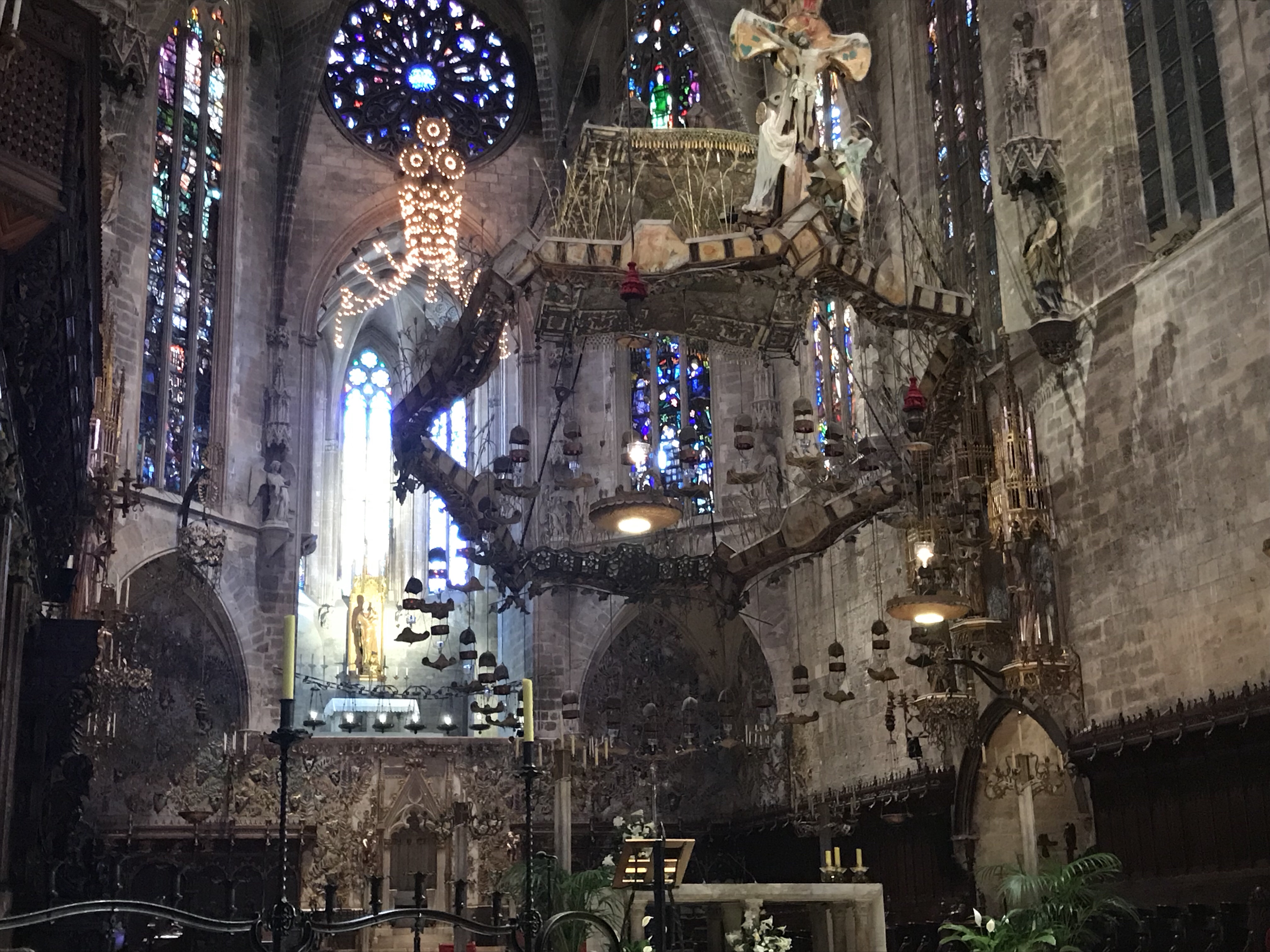 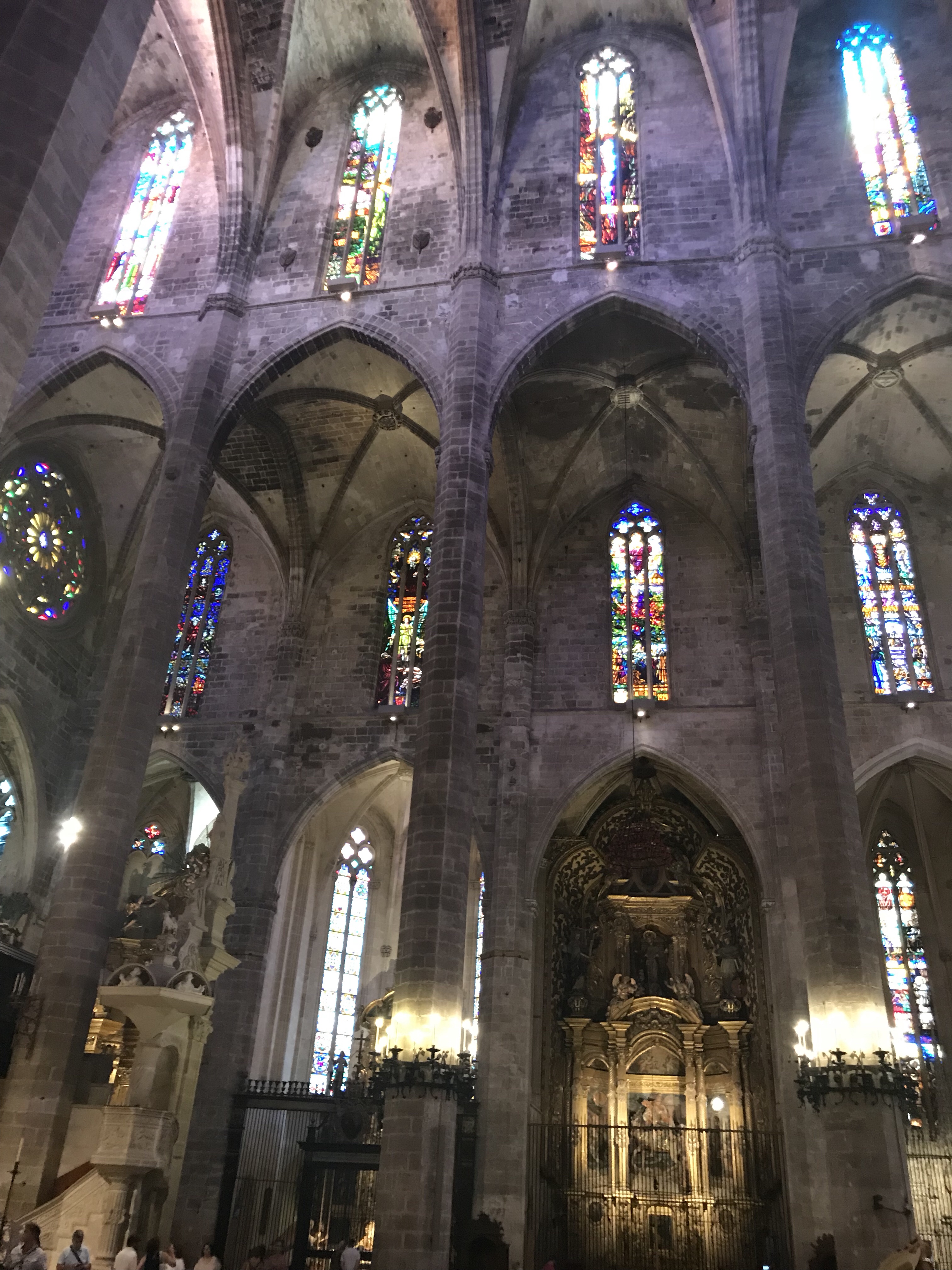 We set off back to Palma early last Monday morning to have solar panels and a frame installed on Madame Geneva.  When we left Palma, we had the solar panels and the frame but not the regulator to connect the power to our bank of batteries.  We also managed to find the source of the fresh water that had been doing its damnedest to sink the boat but that turned out to be a cracked water heater tank.  In a world of 220, our 110 water heater is not easily replaced but we did manage to bypass the heater to stop MG from sinking and to increase the unlikelihood the kids would willing give in to a shower.  “Come on, guys, it’s refreshing!” 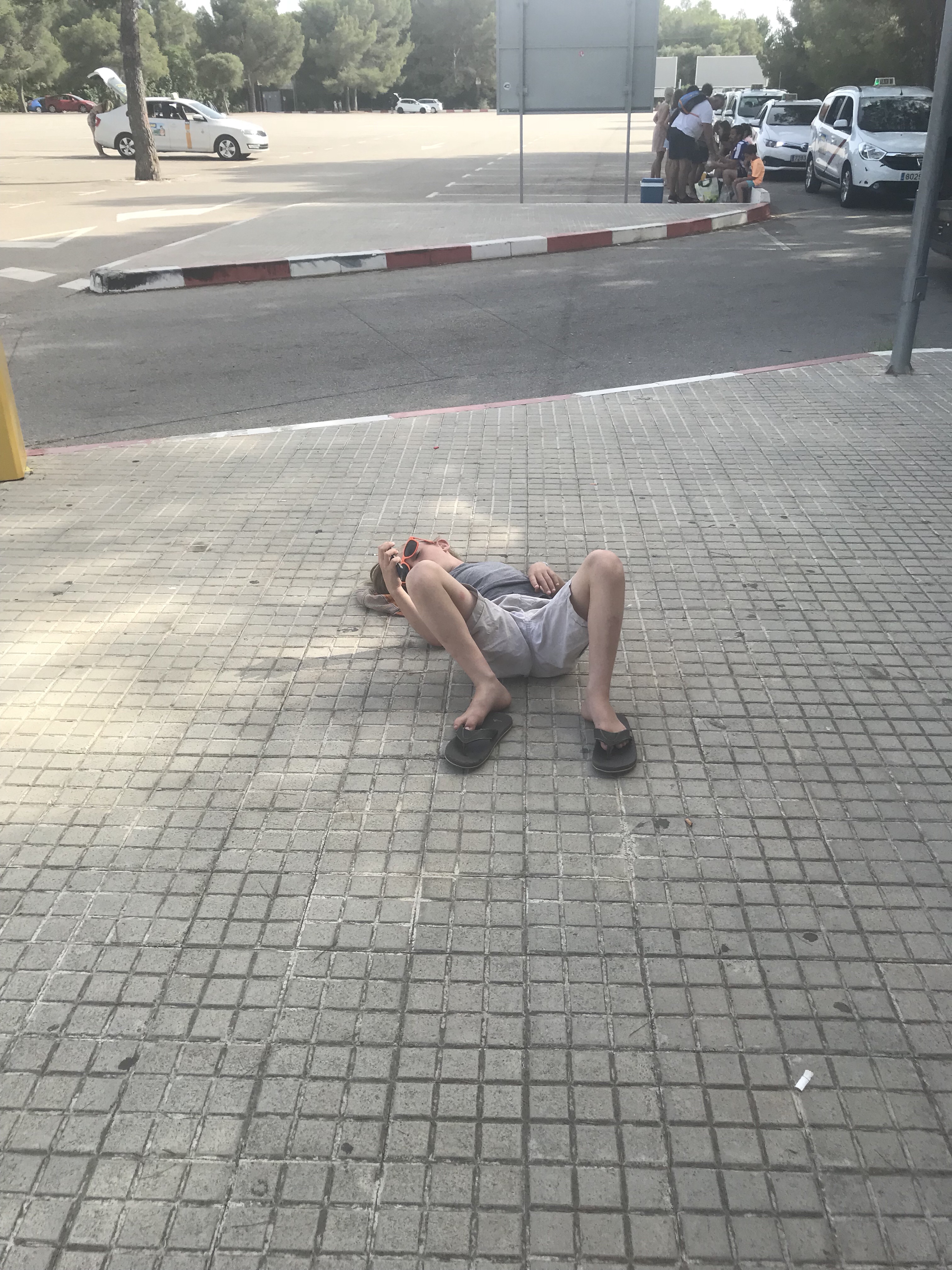 Our time in Palma was further excited by the impending arrival of our friend, Suzanne.  Still a week away, but tickets booked, she became the recipient of a series of texts with a plea for bringing some items over.  I admit I got a little excited when I asked that she bring two Rip Stiks and a scooter but all of the ports in Mallorca have perfectly flat, long quays.  The kids are in need of getting out some energy that doesn’t involve us using euphemisms for hike, hill, or frankly exercise.   She was gracious in her refusal (I didn’t realize there were that many acronyms for profanity!).

We found a great shop called Roll and Roll, where Gherty and Quinn could get rollerblades (we had no luck finding Rip Stiks) and Che could get a scooter.  Justin was still missing out on a good game of Rip Stik tag but all and all, everyone was happy.  I was even thinking I should get some rollerblades but the very nice (seriously) saleslady said, “Maybe you should rent?” 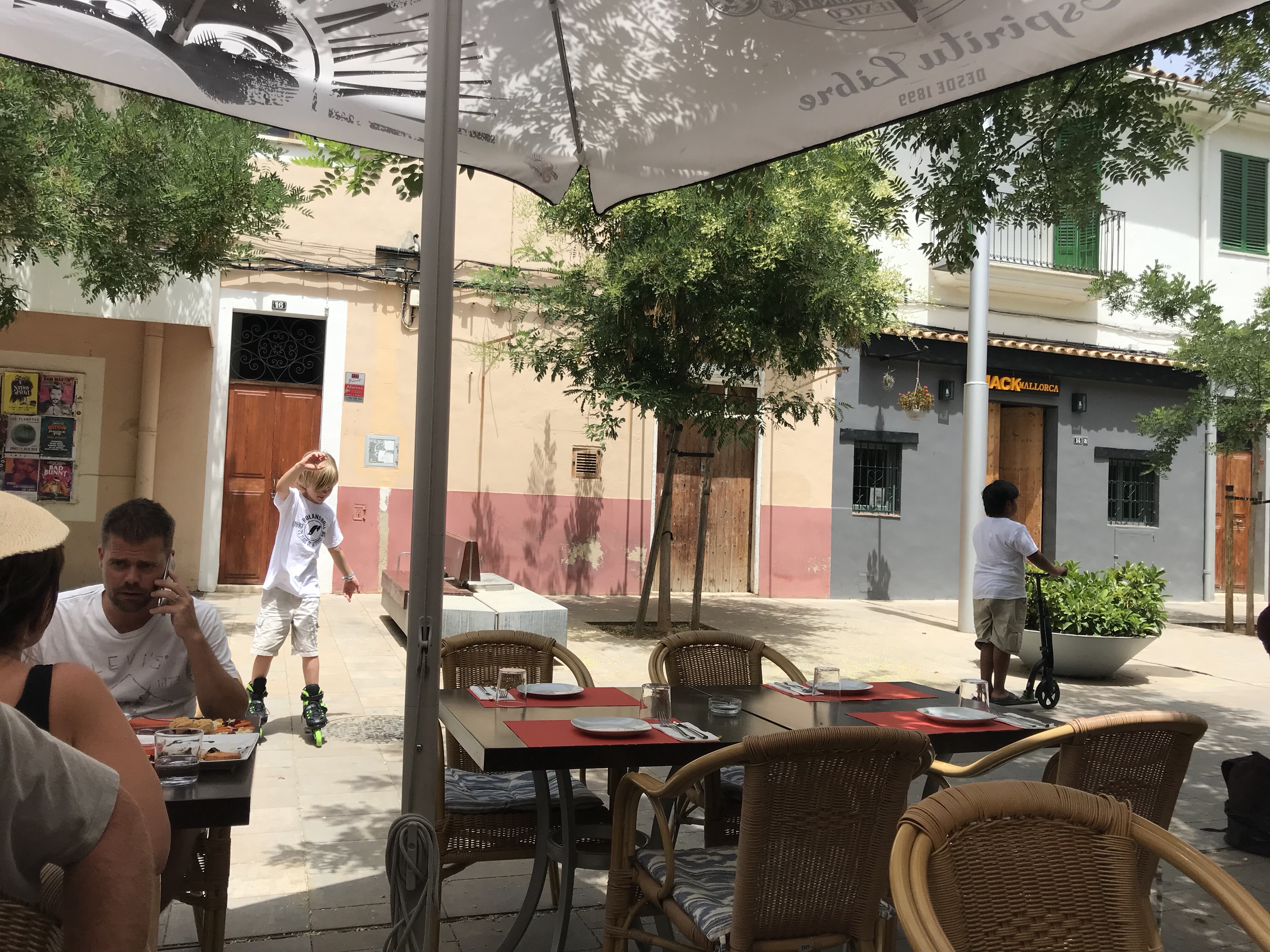 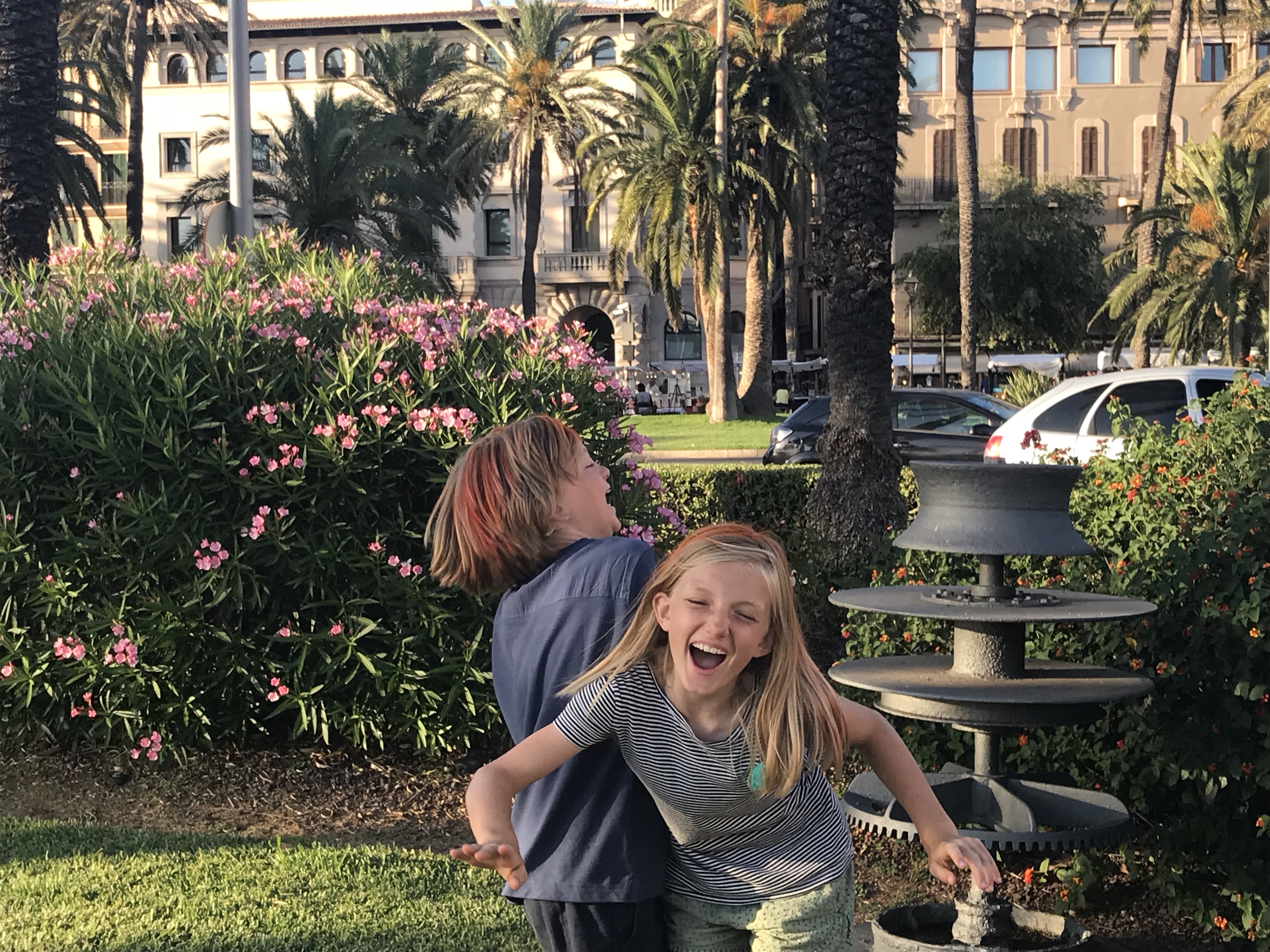 More searches over the next few days had me on some rather long, hot walks about town.  Earlier in the journey, we found ourselves at a Chinese restaurant for lunch and they had the Simpsons in Spanish on television.  Our kids gravitated to the animation.  Justin and I enjoyed a bit of quiet while they watched, transfixed…and we decided to get some Simpsons in Spanish.  I tried to google it to order ahead of Suzanne’s arrival.  And in the end, I found a DVD store well into the city that sold “Los Simpsons”.  I strapped on my backpack and came home with a bag full of groceries, a couple of pots (also something I was seeking) and quite a few episodes of the Simpsons.  Recommence the language education!

Yet there was one more thing to get in Palma.  To play the DVDs, we needed to run the generator as none of the laptops onboard had players.  While I love doing a load of laundry and running some AC, I also kind of like to run a bit more cleanly and not require that we burn diesel just to teach the kids Spanish through osmosis.  We needed an external, USB powered DVD player.  Have you ever tried to find an external DVD drive in a foreign city?  Do people even really use DVDs anymore?

I set out on Saturday morning while the kids attended a rollerblading clinic.  I walked everywhere.  Each potential store was oddly closed (even though the hours posted said otherwise).  From one end of town to the other, I sought out an antiquated technology in hopes of a simple solution to the boundaries our kids face when wanting to meet other kids.  They were working on their Spanish, practicing daily with Babbel, asking for help at stores and restaurants but you typically don’t engage kids your own age by asking them where the bathroom is.

Did I mention it was hot?  I stopped at a local express grocery to see if they had something (there is typically a very odd collection of fruit, meats, milk, wine, and electronics).  I left with wine.  I had a shoulder bag and in that bag, it went.  At long last, I found what I thought to be my best bet.  I was running short on time.  We wanted to leave the dock and head to an anchorage around noon.  I found a DVD and gaming store with electronics in the window.  Suffice to say, they did not have an external DVD drive “in stock” but the kind salesman walked me out and pointed at a pawn shop.

What a find!  I walk in and not one, not two, but three Rip Stiks!  And a pair of rollerblades in my size.  And an external DVD player.  I left the shop, with my arms full and the idea that I could rollerblade back to the marina.  The ride started flat. I knew I was on a hill and that the marina lay down by the sea, but it was flat to start.  My idea was to ride a bit, walk down the hill, and then ride again back along the quay.  It was rather a brilliant plan.  And with all brilliant plans, there was just a tiny inherent flaw.

I strapped on the blades and shifted about my baggage so that my shoulder bag with the wine was a ‘backpack’ and my grocery bag held one Rip Stik and I carried the other two in my hands.  I was doing well.  I made it a few blocks before the decline of the road made for a quicker ride than I was ready for.  I started to get nervous.  I tried putting my knees together to break.  I couldn’t really sit back because if I fell on the wine, well the wine would break.  I opted for a slow turn onto another road to decrease my speed…except that ended up being a proper decline.  I abandoned the Rip Stiks and just started yelling (in English), “I cannot break!  I cannot break!”  Finally, in my last desperate move, I slide out to the side, saving the wine, and seriously bruising my hip.  I removed the rollerblades, picked up the Rip Stiks and limped my way back.

I will say, without doubt, that everyone was happy with the booty.  And now, I know where the pawn shop is.