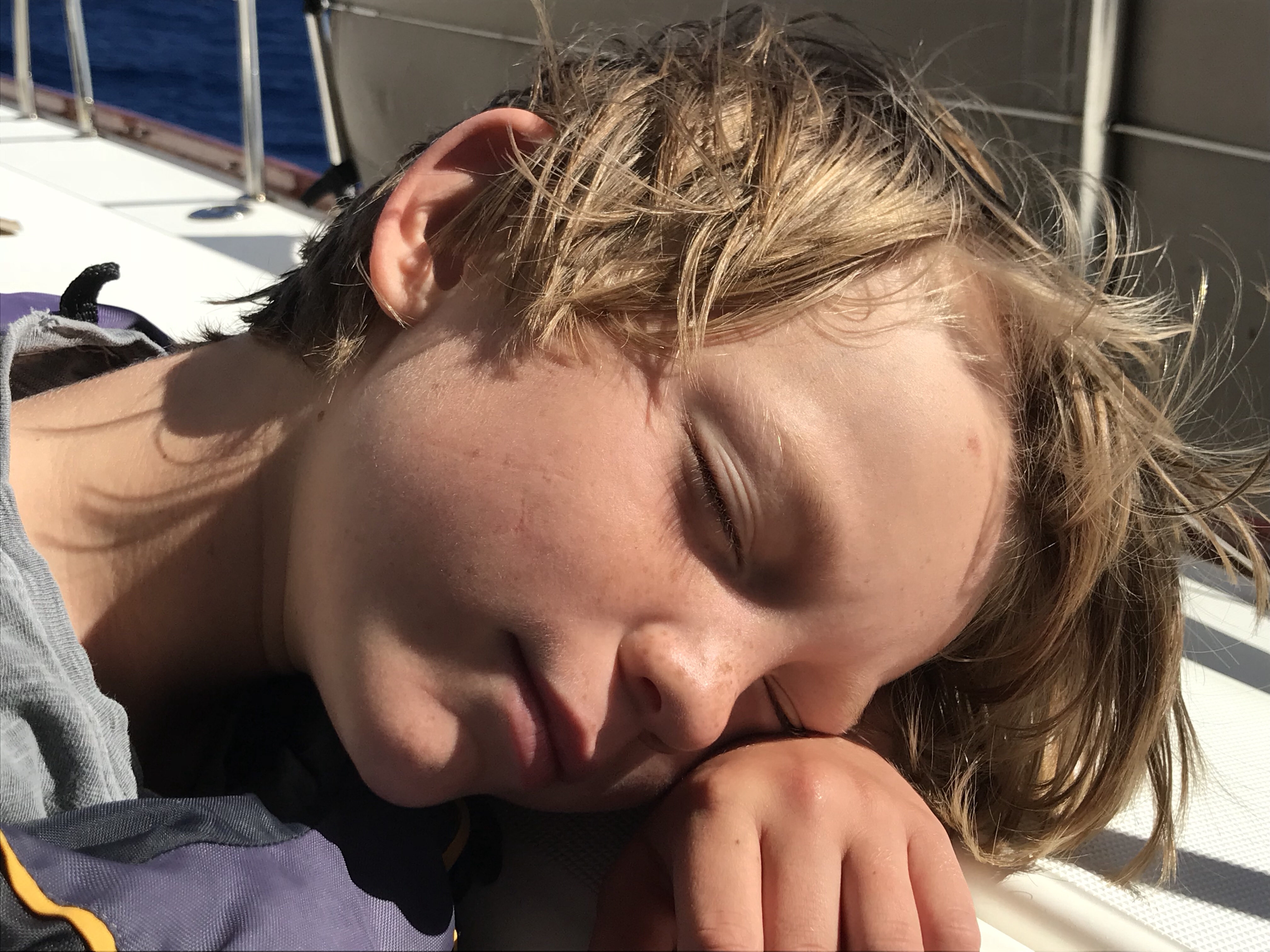 Yesterday, Che asked me what complacency was.  I replied that complacency was a reflection of taking things for granted.  Because things have been going well, we forget to take the typical precaution to avoid issue.  Such a little foreshadower, that Che.

After our swinging evening at anchor off the Ilet des Cabrits, we spotted a previously moored boat leaving and rapidly took our positions.  There is nothing rapid about trying to bring in a hundred feet of rope and another two hundred feet of chain.  The rope needs to be carefully watched as it snags and bunches in the winch.  When raising an anchor to go off to sea, there is little rush.  You watch the chain for complication or stress.  You watch the distances from fellow anchored boats to ensure safety from collision.  You extend your thankfulness and grace to the place you are leaving.  When raising an anchor for a better location (a settled and still mooring just yards off the beach and rocks in this case), you watch for suspects.   Is that guy on the bow more ready than I?  Is his anchor retrieval better?   What is that boat doing?  Your generosity for neighbors is, well, rather limited. 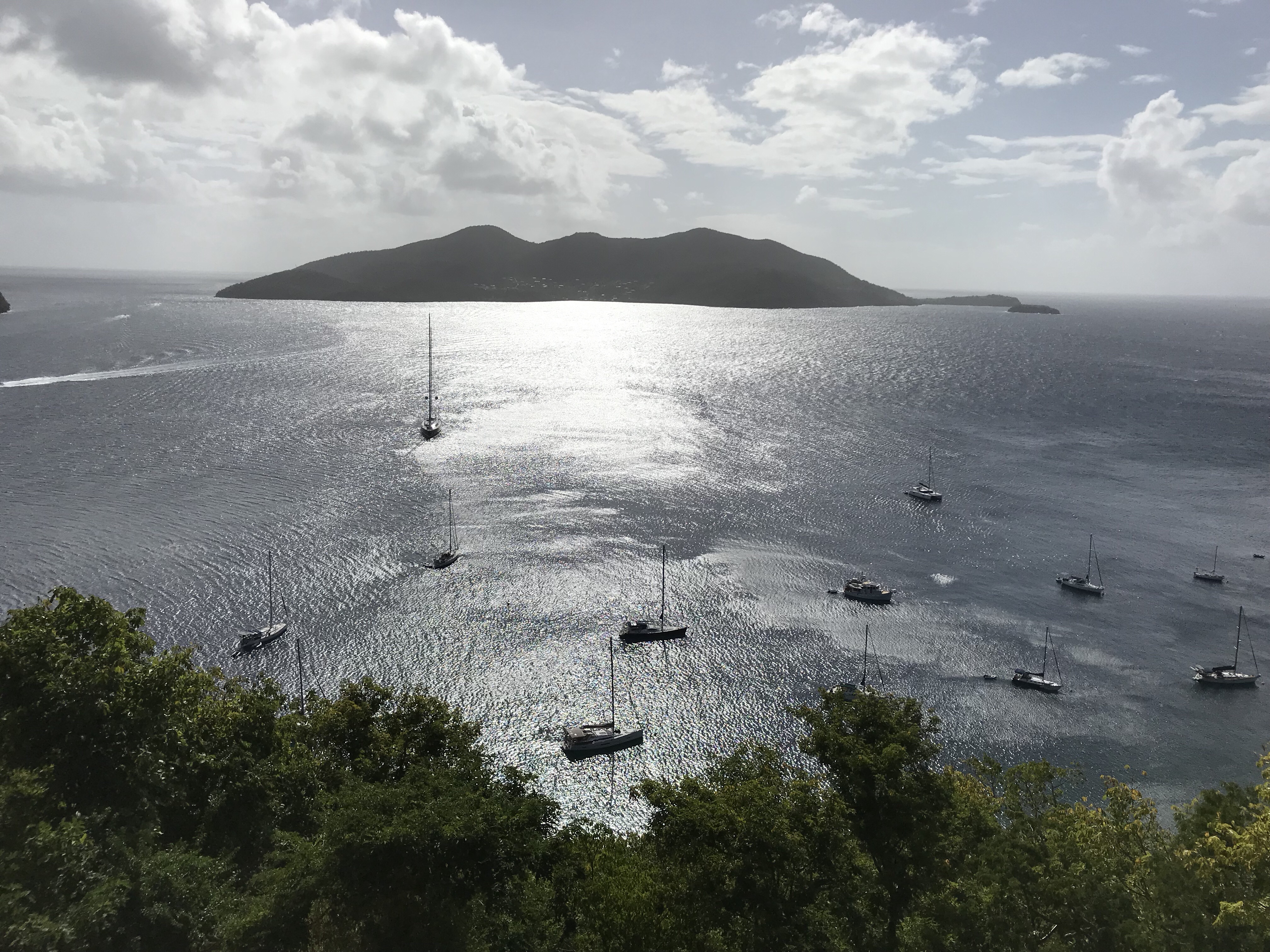 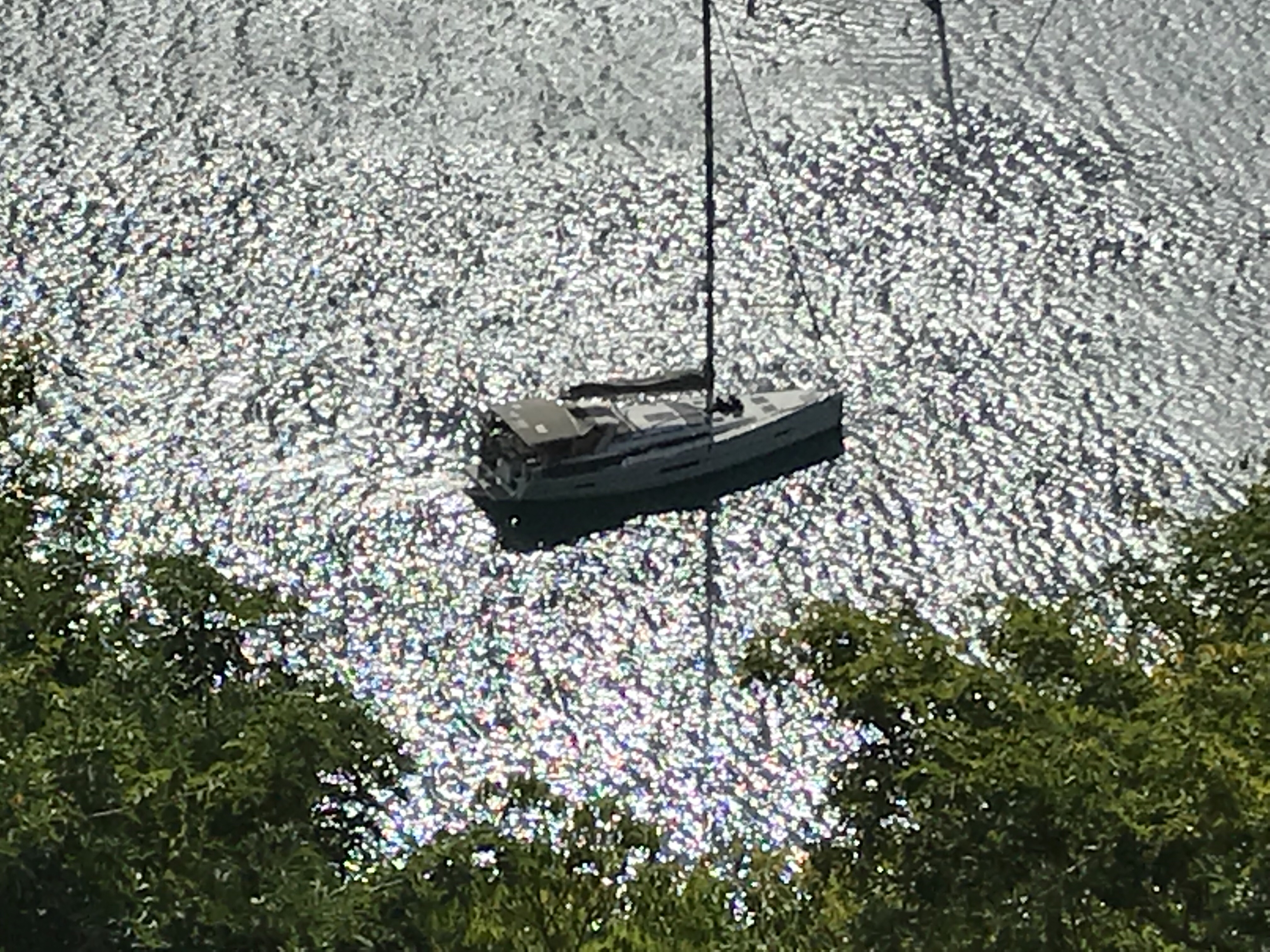 We found our new spot rather idyllic.  So close were we to the shore, it seemed we could touch the rocks.  The gentle waves lapped at the coast.  The pelicans clumsily dove for their dinner and the blue herons peered out into the clear water in hopes of theirs.  Gherty inflated the kayaks and the kids went exploring.

The dinghy ride into town, Terre-de-Haut, was a bit adventurous and wet. We arrived nothing short of drenched. Justin left us on the dock so we could sun-dry while he cleared us in. From Madame Geneva to town, we had to pass what seemed the open sea. Waves came greedily grabbing for the bow. The spray was not sparing. The sun dried us rather sufficiently and we gradually made our way to the town square where we ran into our friends. 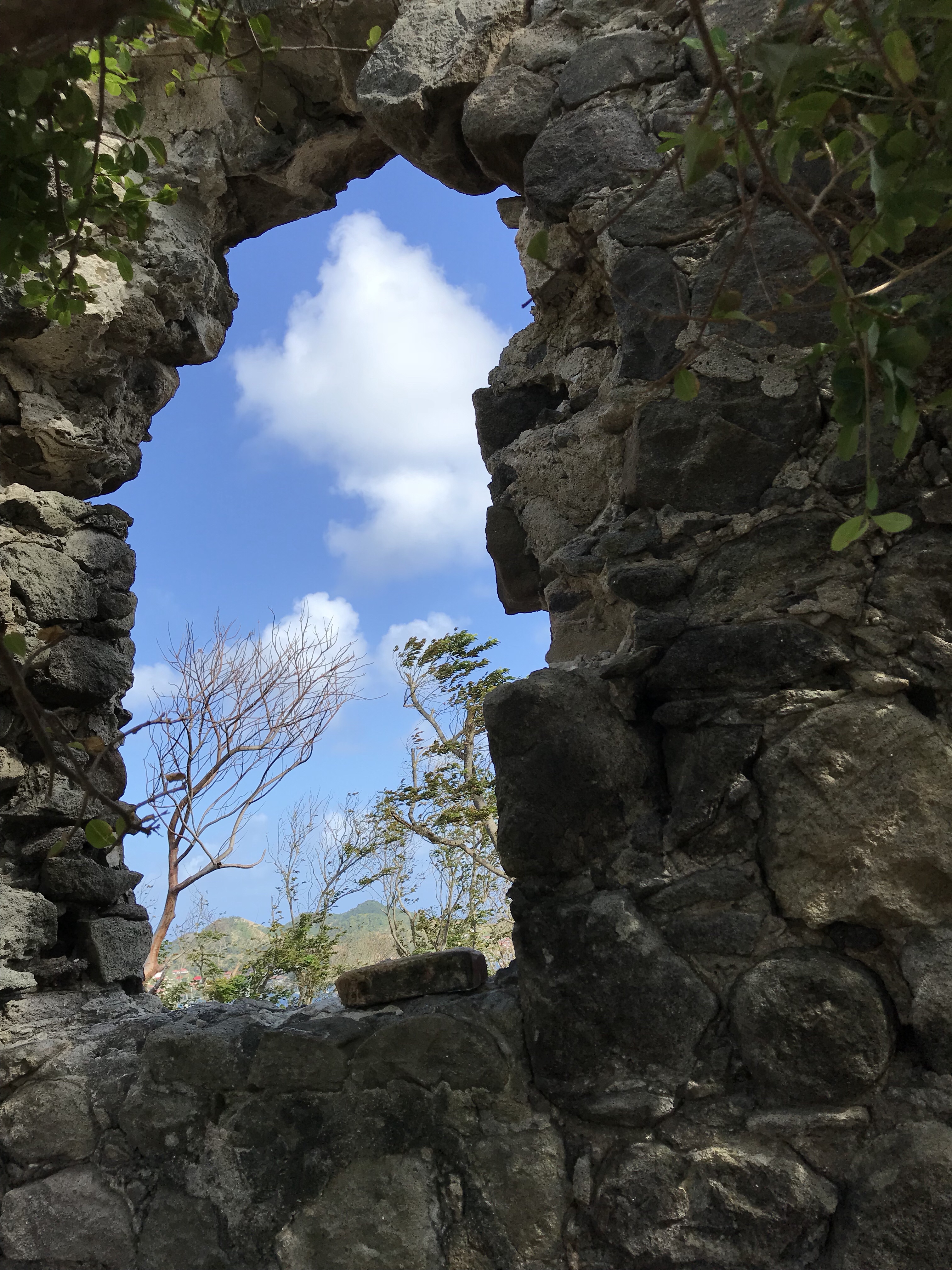 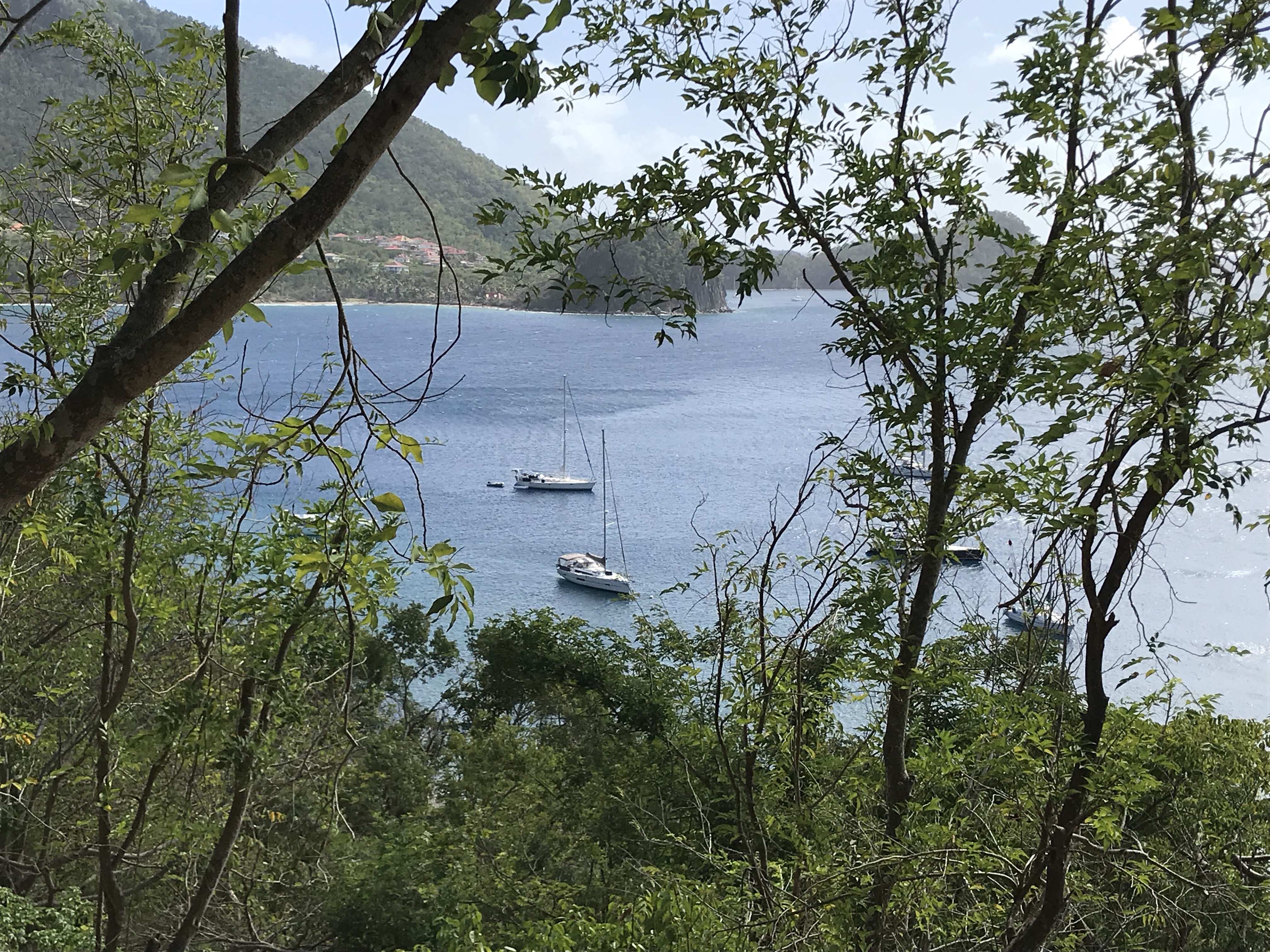 The Saints are simply lovely. Terre-de-Haute is an easy town with lots of fantastic French restaurants and shops. The street is largely pedestrian with the occasional influx of vehicular traffic (when we finally rented an electric car, the diversions around the town were much of the trip). We practiced our French to the tolerant Saints of the Saints. I discovered, after many years of schooling, that my pronunciation of “beaucoup” was closer in fact to “beau cul”…which made for quite the impression when coupled with merci.

We invited Caradow over to the settled side for a bon fire and hike up to Fort Josephine, only to realize that much of the island coverage was manchineel, an extremely toxic tree (in fact the reason for Ponce de Leon’s demise). Our trail adventuring was well worth the climb, with epic views of the cluster of islands and the great variations of sea.

if I’m forced to wear socks I’m wearing the hell out of them!

Our bon fire was abruptly terminated when we realized the wood that had been gathered was the manchineel. The sign telling of the manchineel was on a tree that was not at all poisonous, and actually had a swing tied to it. We imagined imminent death and were relieved to find all perfectly fine the next day. 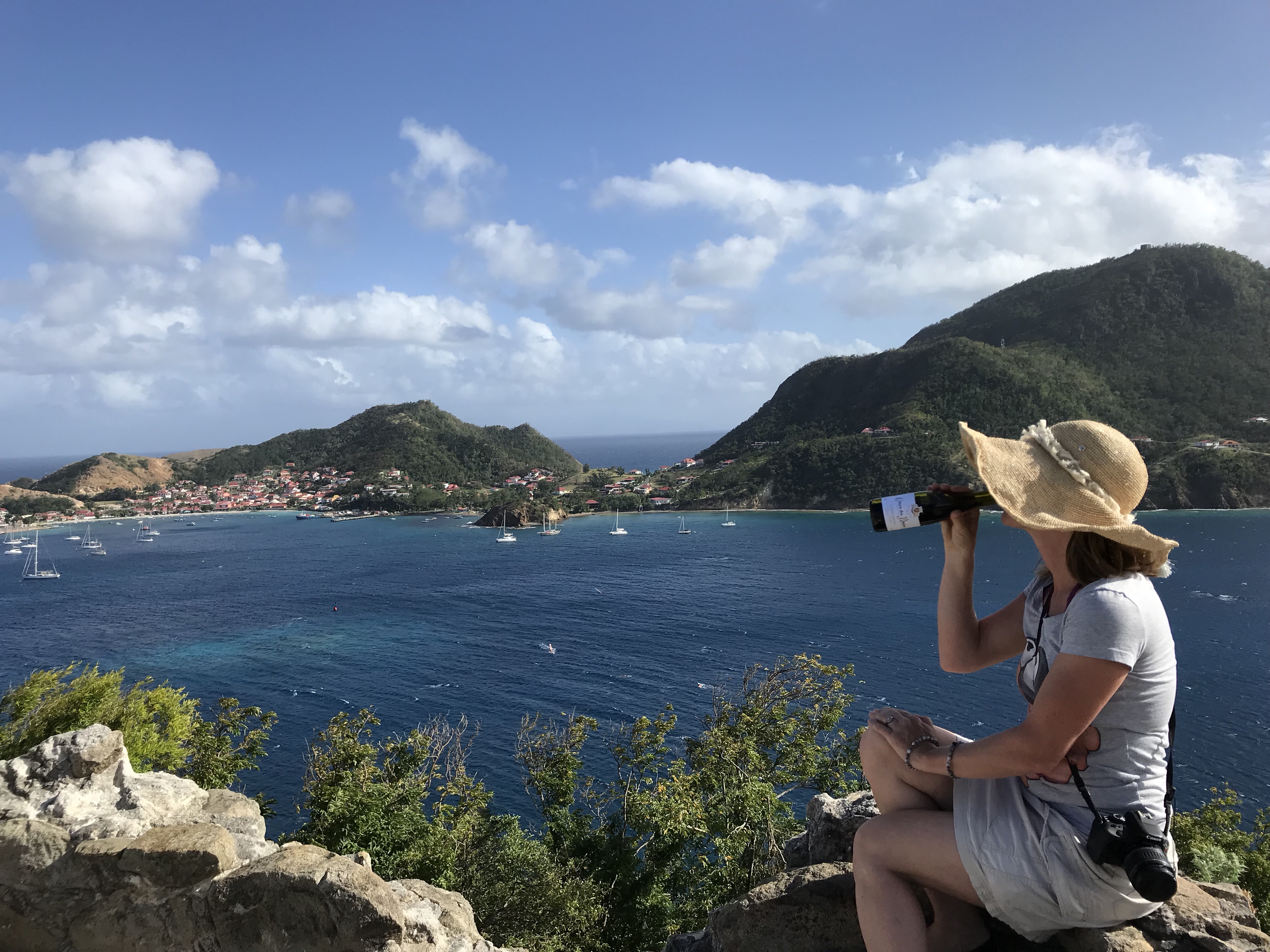 When we took leave of the mooring for our trip across the channel to Guadeloupe, we waved to our Kiwi friends who had just pulled up to grab a vacant mooring. Their one young son had already kayaked ashore with a bow and arrow. Their other son was snorkeling. And the father crouched low on the bow, sharpening his machete.

The sail to Guadeloupe was stellar. 15-20 knots of wind was just forward of the beam. Seas were 5-7 feet, long and slow. Madame Geneva surfed along at speeds in the tens. We came in the lee, around the point of Basse Terre, and sailed up the western coast. A last minute arrangement had been made for my sister, Pam, to meet us in Pigeon’s Island Anchorage and we would arrive a few hours ahead of her.

What a surprise to find not only Pam on the beach, but two of her sons as well! The next couple of days was a quick dunking into the life aboard Madame Geneva. We snorkeled in the great marine park. We sailed up the coast to Deshaies, a small fishing village. How incredibly different the journey was, without waves crashing over the bow. The sea was flat but with a good breeze. The anchorage was settled but rather full and we opted for a spot near the outside of the harbor. The depth and holding were good, and the worry nonexistent. 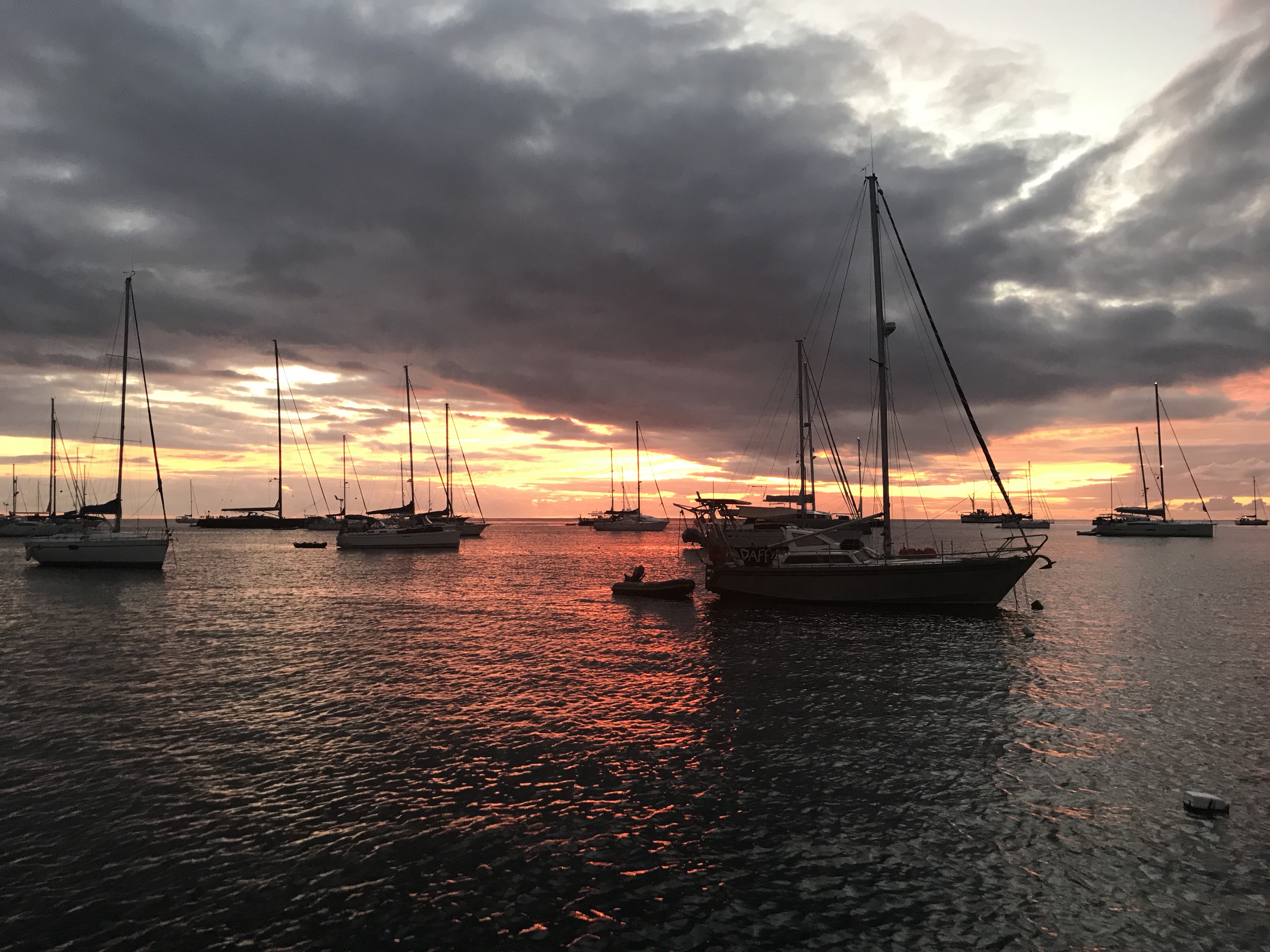 Our days in Deshaies were bittersweet. My sister and my nephews grabbed a taxi back to the airport. Our friends (Caradow, Merlin and Ti Amo) all met up for our last bit of French culture before journeying north and likely different ways. Our crew went on a hike one day on what was supposed to be a half mile up a trail to find a piece of Tupperware in the woods (long story) but found ourselves climbing quite the hill over rock and root. That hike ended up being 3.5 miles. The next day, all of the families (seventeen people in all) decided to hike over (and back) the mountain to one of the most beautiful beaches. That hike was 5.7 miles!

But sailing is a funny thing. I keep talking about the weather…but I must. The winds were changing. The westerlies were coming. There was a Front pushing down from the northeast that would create not only a dramatic change to the ever consistent trades but also a westerly swell of 12-17′. The captains discussed the options of the Leeward islands, and frankly most of those harbors kind of bank on the easterly winds. We decided on Nonsuch Bay in Antigua.

We set off after a morning of provisioning on Thursday. We had quite a night and morning of it as the generator kicked off, due to a rather large tree being suck in through the sea cock. Justin dove and wrestled the sea funk. Then he snaked the line until, through sheer will of the captain, the raw water flowed again. Generator restored, and refrigerators stocked, we were ready for Antigua. 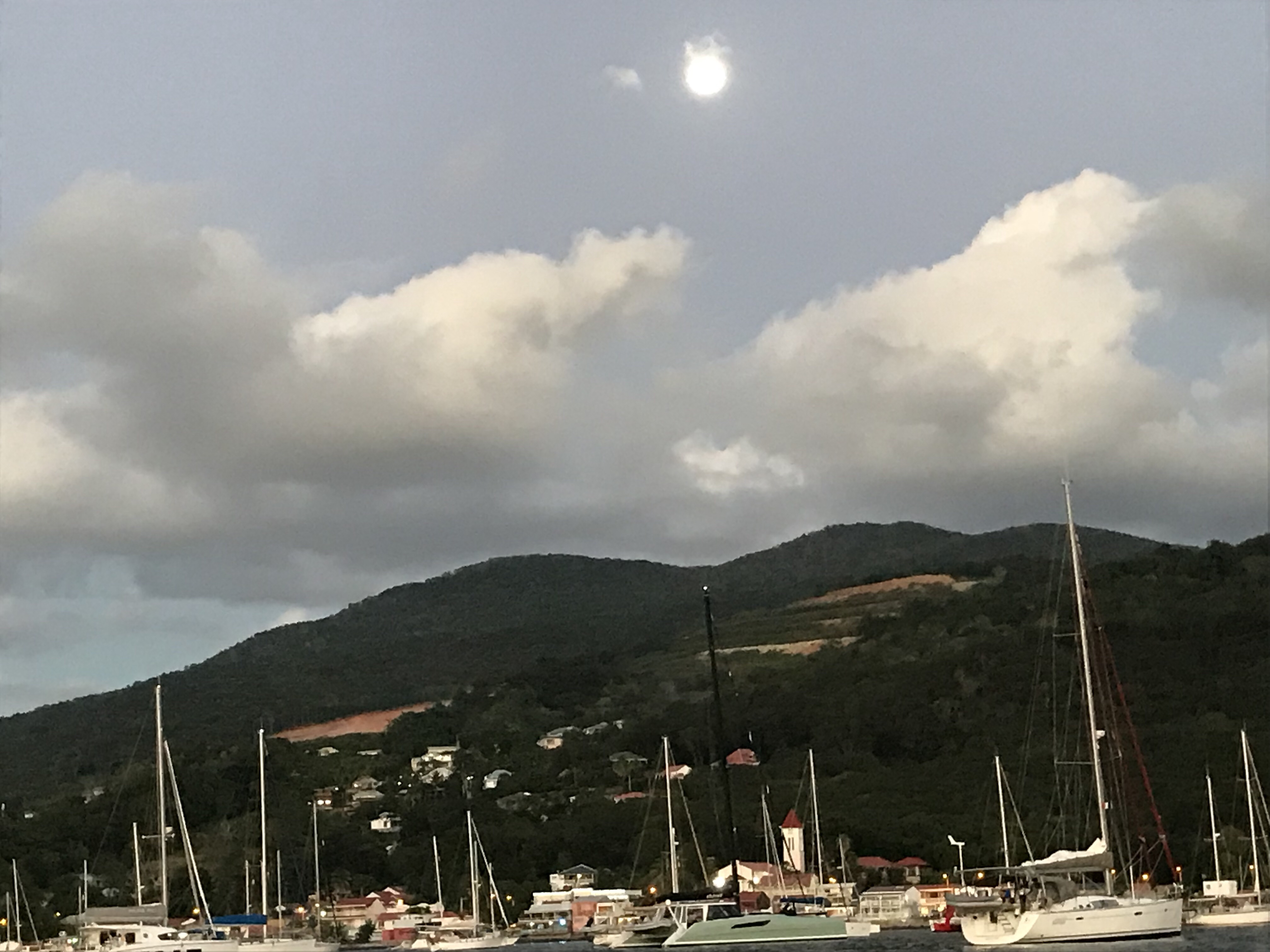 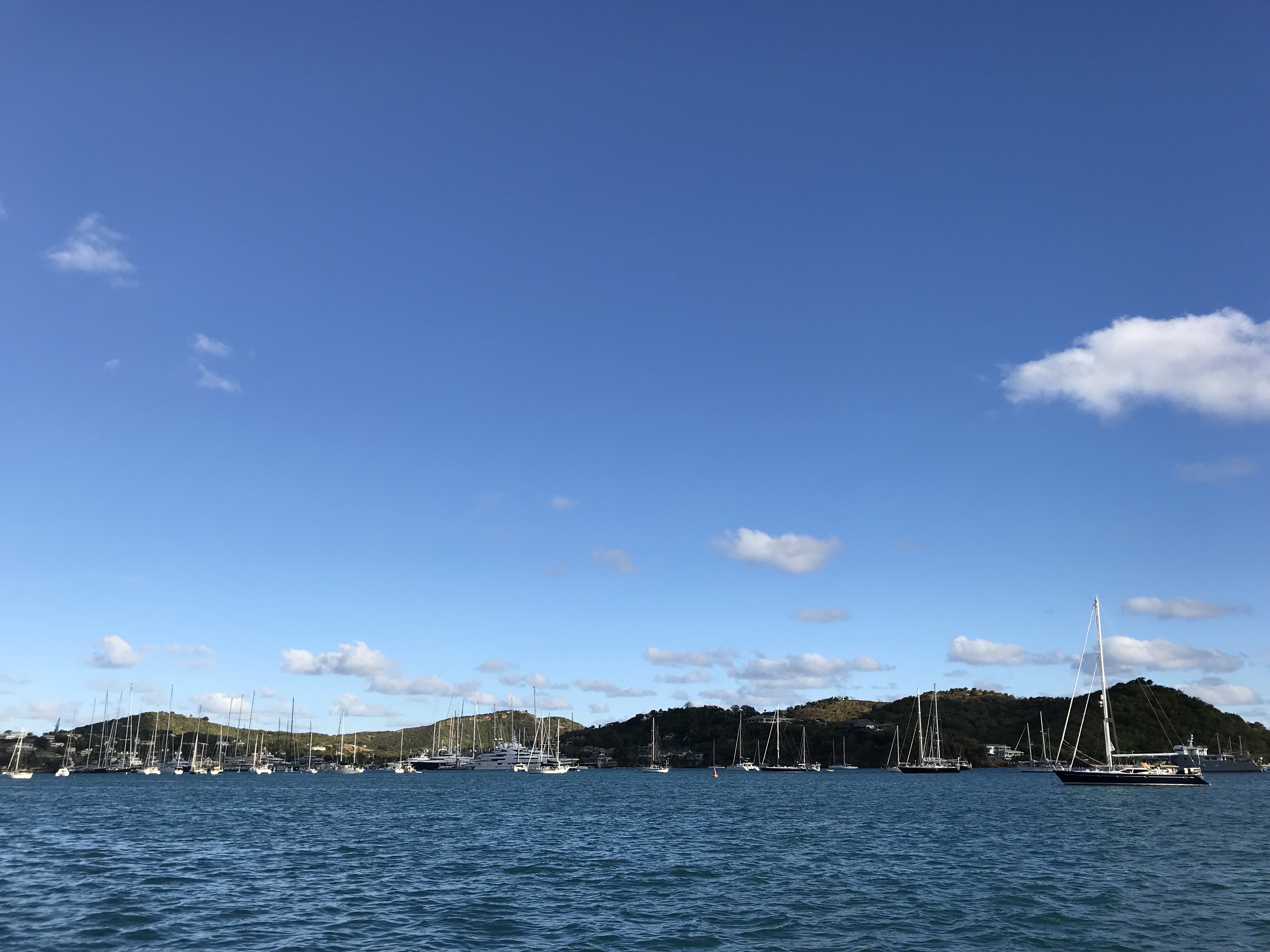 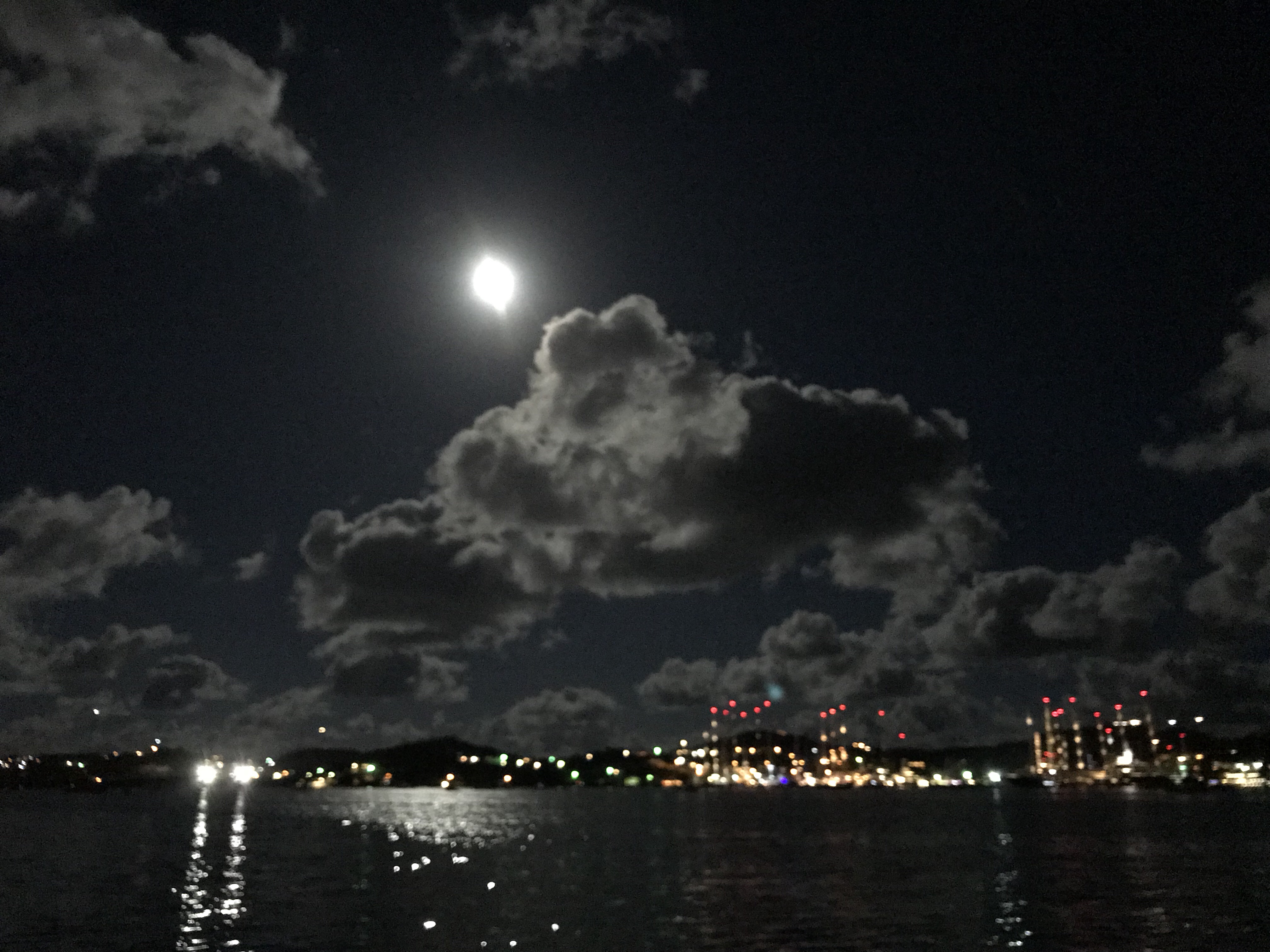 The water off the coast of Guadeloupe took on a gorgeous green, in great contrast to a steel like blue created by the occasional cloud. Monteserrat laid brilliant in her greens, browns and grays. The wide streak of volcanic ash dominated her presence even from a distance. Guadeloupe gradually slipped by as we crept along her northern coast and passed the silky sands of the beach where we laid about the day before.

We turned off the motor once we felt the presence of a steady upwind. Close-hauled, and well heeled, we sailed briskly along at 9.5 knots. The sea was flat. No waves. Just a beautiful girl (the Madame, that is) out for a day’s ride.

We were three quarters across the channel when we heard the beeping, indicating low battery. This typically happens when MG gets on her side but best to run the engine to give the house bank a boost. Sailing still, we turned on the motor and left her out of gear. Simply lovely…until the boat noises changed. “Check the fuel!” But it was too late.

This boat has two fuel tanks with a transfer between. We know to leave the transfer closed but sometimes it is easy to forget what is closed and what isn’t. Ahh complacency. All the fuel from tank 2 (which is what we were using) shifted to tank 1. And when the last drop moved, effectively filling tank 1 entirely, the engine ran out of fuel and quit. At that point, it is a effort of patience. We slowed the sails and began to crawl along at 1.5 knots.

Justin bled the lines but we could not get the engine to pull from tank 1. I studied the manual for the diagram of the valves and what should and should not be open. And at last we filled tank 2 with our cans on deck. Justin at last started the engine.

We had options. We could have grabbed a mooring under sail (done that before). We could have towed MG with the dinghy to a mooring. And the sea was super settled. Still it was all a reminder of how important the checklist, even with such a benign crossing.

And as Justin says, “I am covered in fuel. We have a wrist rocket on deck. Hello, Antigua!” 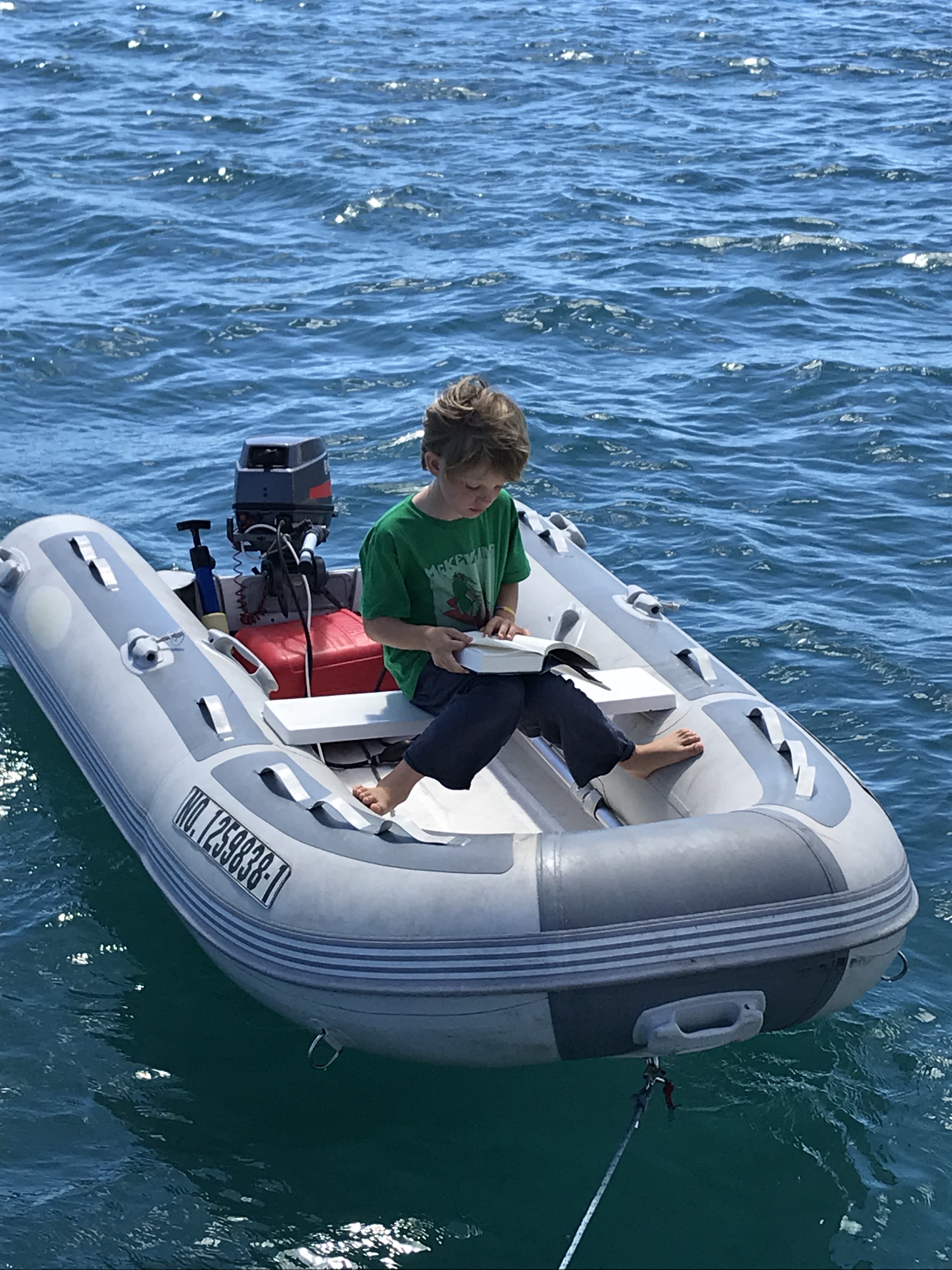 yep. Reading in the dinghy. Homeschooling…check!

And the kids. Well, they just sat there asking for ice pops and played games of “I am not touching you.”