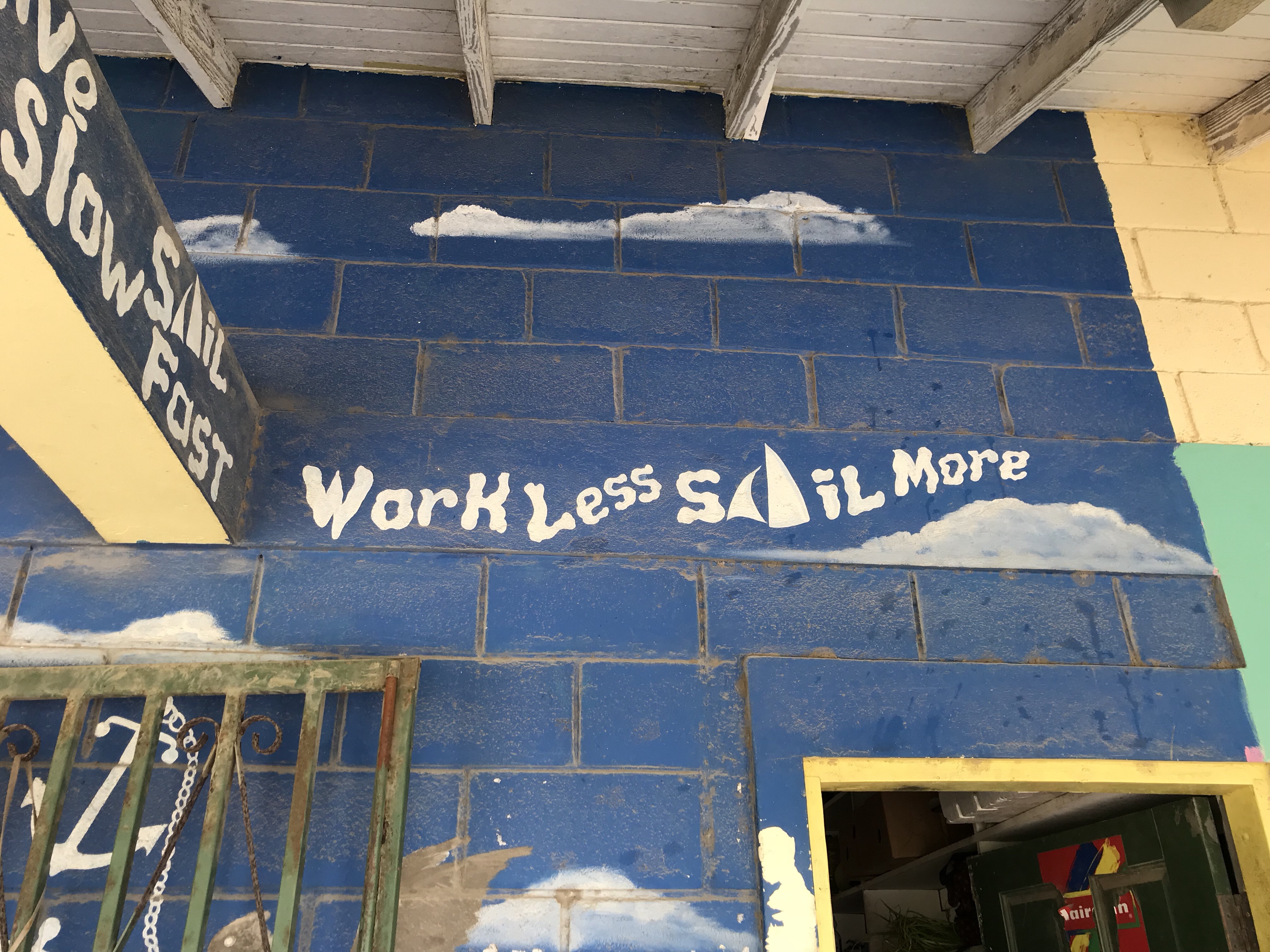 An evening at anchor in St. Georges had us up and ready for the sail to the Grenadines on Tuesday morning.  Sleep was at a minimum for both the captain and me.  The sea, a teasing, but not quite cruel, mistress, did not rock but simply rolled much of the night, and became even more squirrely as the wind died.   Our test night did leave us confident in the generator and the water maker (10 gallons of fresh drinking water!), and genuinely restless, anxious to get going.  We had such a lovely time in Grenada but we were well ready to go sailing and set about on this journey.

Up went the main before leaving the bay; and soon after, out went the jib.  Our course was set for Union Island to clear into St. Vincent, with the intention of swimming with the sea turtles in Tobago Cays the next day.  The sail up the leeward coast of Grenada was a close haul, with the wind steadily blowing 15-20 knots.  The captain stayed at the helm while I attempted to complete some work while still in the lee of the land.  We passed the green mountains and craggy coasts and thought of the super funny now, but a bit intimidating then, road travel.  Justin was always at the wheel and I was much of the time assertively navi-guessing.   “Are you sure this is the right way?” he would ask as the dense forest crept heavily into the road, which had lost its paving.  “Yes,” I would assure him, knowing we couldn’t turn around now if we tried.  And anyway, all roads eventually return to the sea. 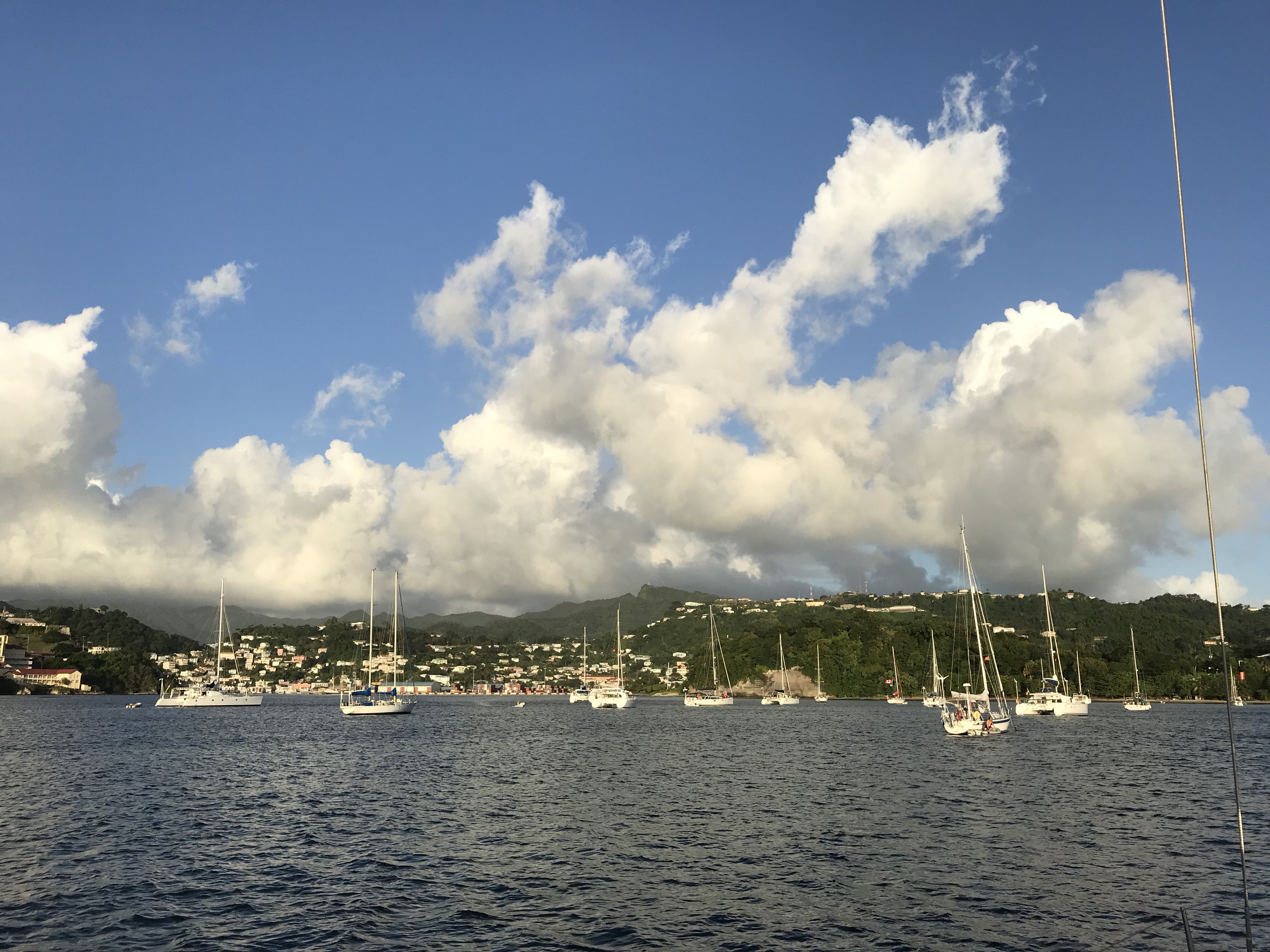 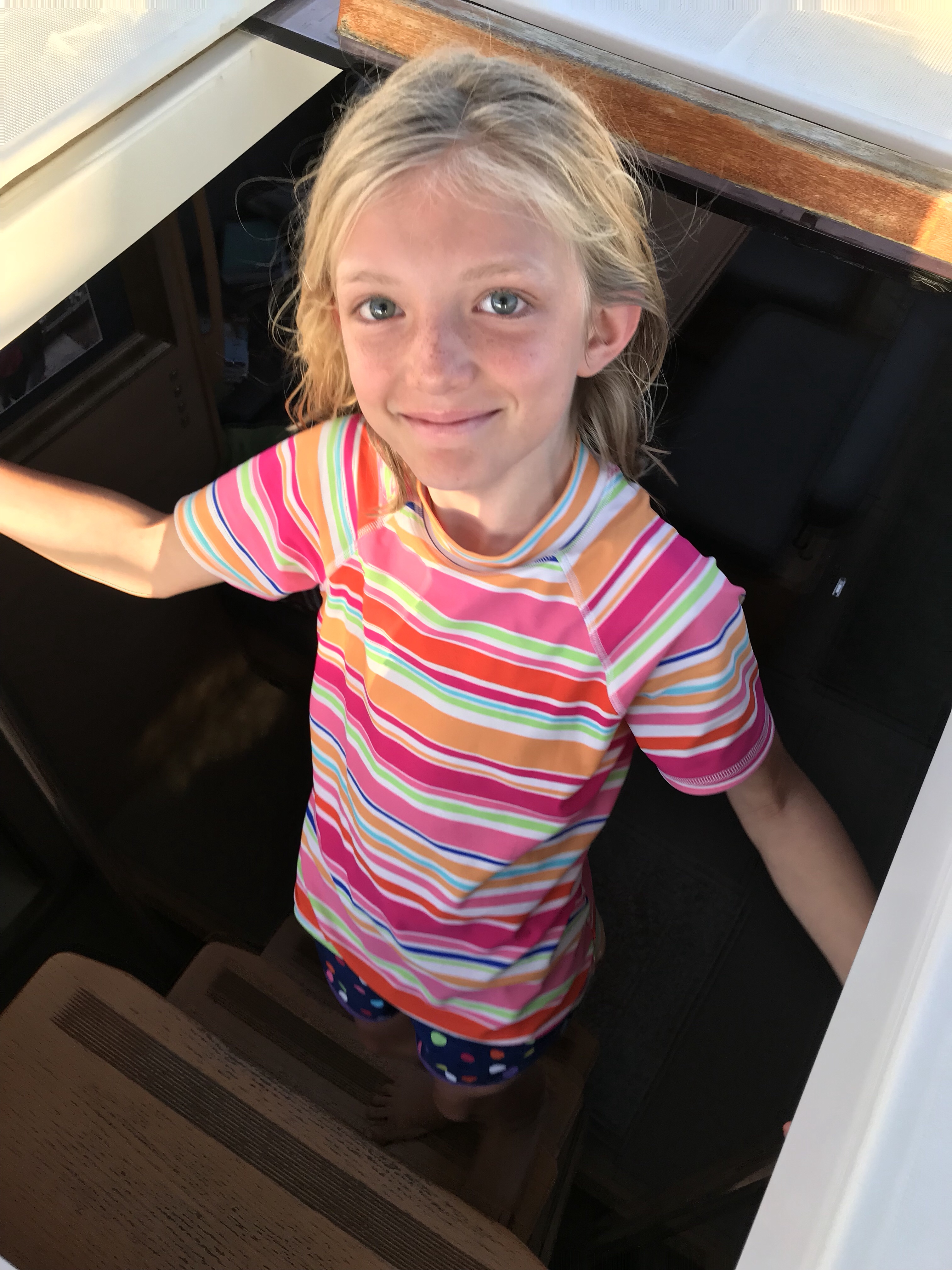 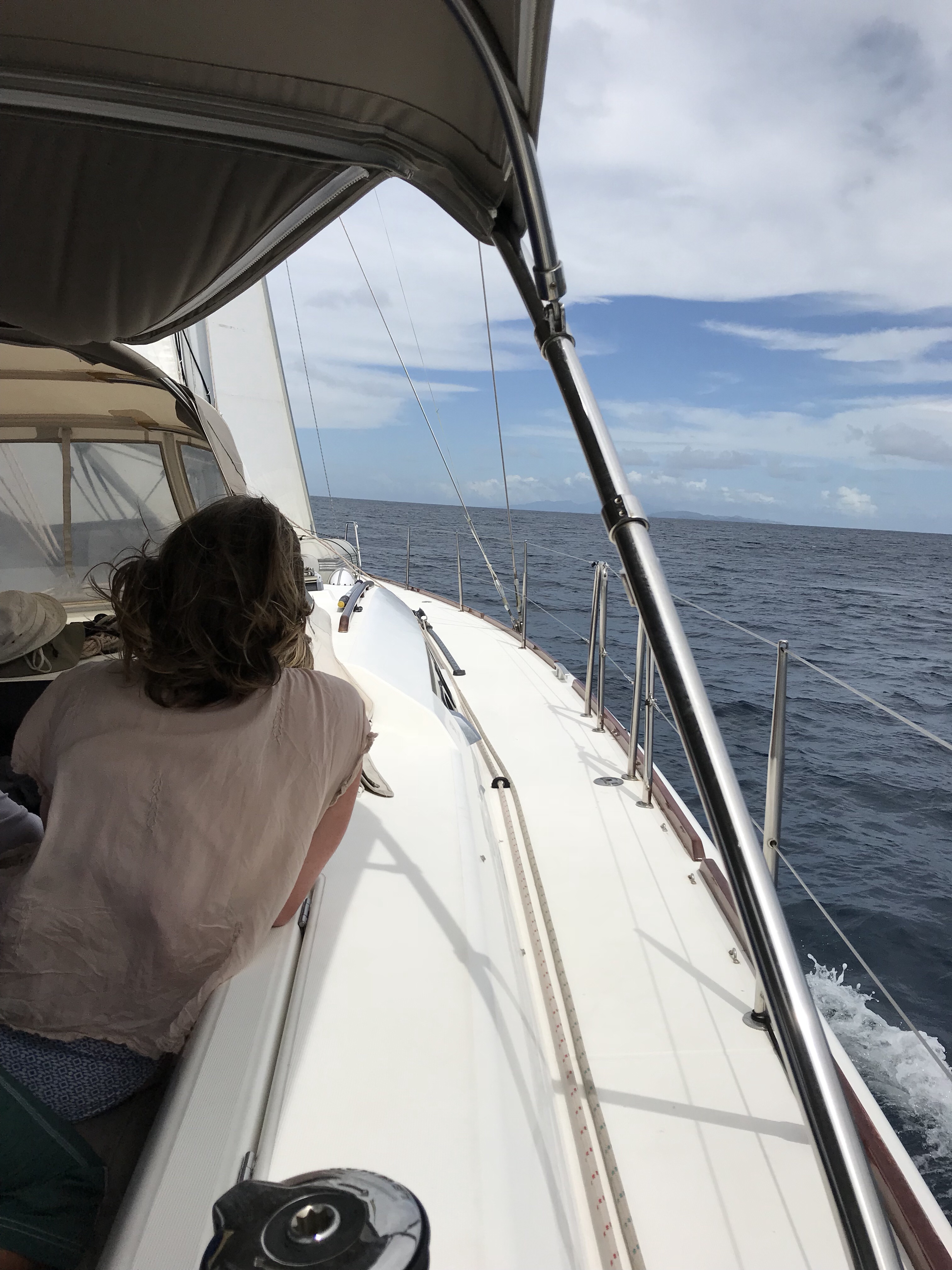 As Grenada slipped past our side, and Madame Geneva found herself in the stretch before Carriacou and alongside of Kick ‘em Jenny (our friendly submerged volcano), the wind and seas picked up.  The kids took the opportunity to get splashed on the bow.  Legs around the stanchions, the children squealed as the water splashed and whipped them in their faces.  Quinn moved to the low side, just outside of the cockpit.  Soon, everyone was yelling… Gherty had spotted a whale!  Her description:  brown with barnacles and a bulbous nose.  A beaked whale?!

The wind was blowing steadily at 25 knots, and the clouds thickened and dumped rain, while we passed Carriacou. The kids retreated to the cockpit or down below, obliviously reading while Justin held steady.  We brought in the jib and dropped the main.  As we watched white out squall lines devour the islands, we thought about exit strategies.  Union Island had disappeared.  We certainly were not going to approach the reef protected harbor blind.  We slowed down and took our lumps.  Gusts of 35 knots, blinding weather, and pounding three sided waves (reasonable in size but confused in direction), encouraged us to slow to a barely perceptible forward of idle.

All things pass.  Union Island reappeared.  The sun shone strongly over Happy Island and we quickly headed in before the next series of squalls.  We readied the approach with the boat hook and bow lines.  The wind was honking and kept the metal on the bow whistling high and long.  In Union, there are always helpers.  Sometimes those helpers are a hindrance.  When docking, mooring, anchoring, it is imperative that there is a line of communication between the bow and the stern.  When there is a ton of white noise and someone shouting alongside the beam, it creates a bit of a disconnect. Best to just work with what you got, even as it seems to go quickly sour.  In short:  I tossed the bow line to the helper.  He dropped the line while threading it through the mooring ball.  Justin attempted to reverse but the gear was not engaging.  Justin somehow maneuvered our 50 ft boat through a packed mooring field, with winds of 25-30, by drifting sideways until he could engage forward, restart the approach, aim directly at the helper boat who had lodged himself between us and the mooring ball, while I tossed the line and quickly lashed it back to Madame Geneva. 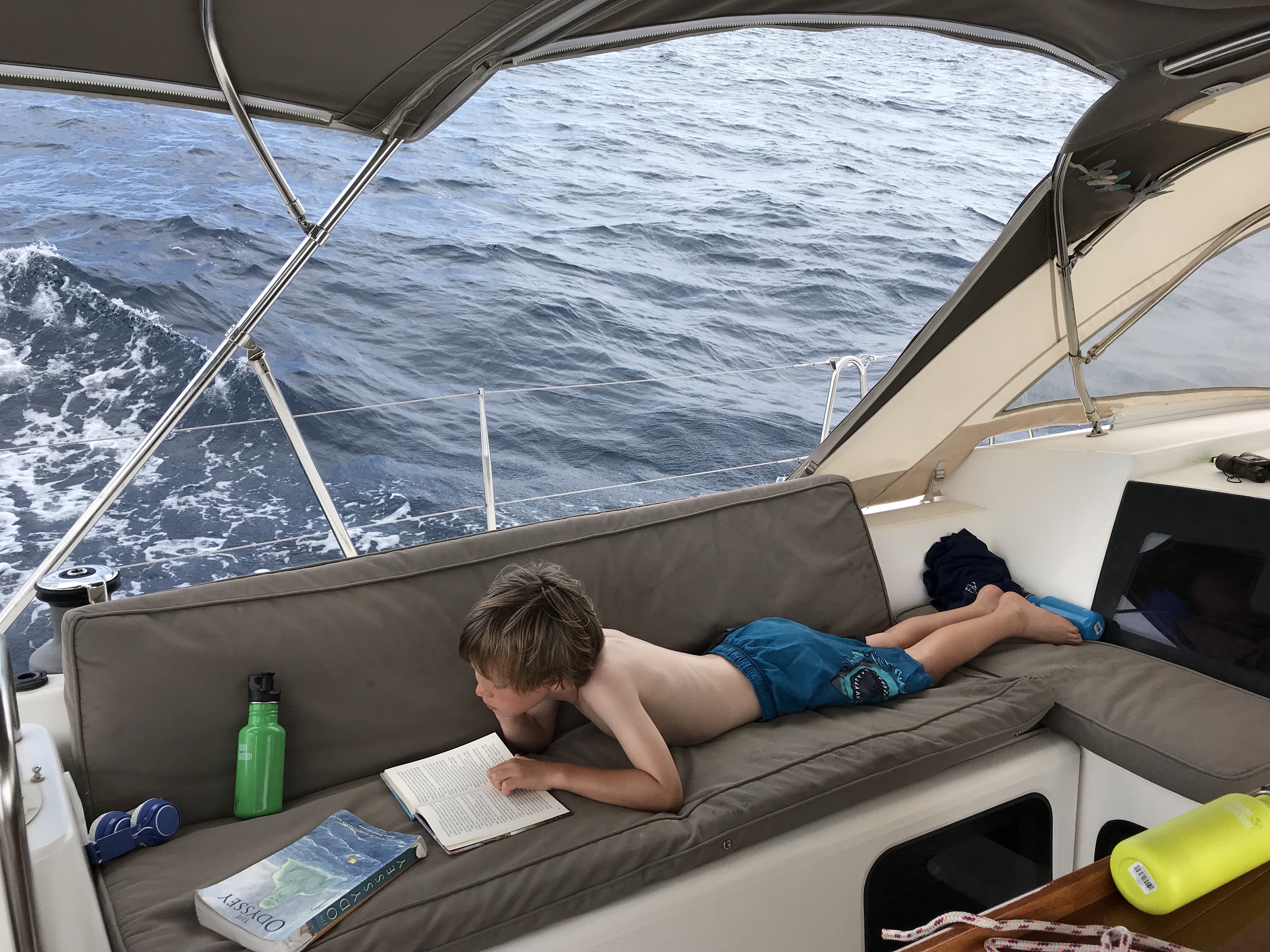 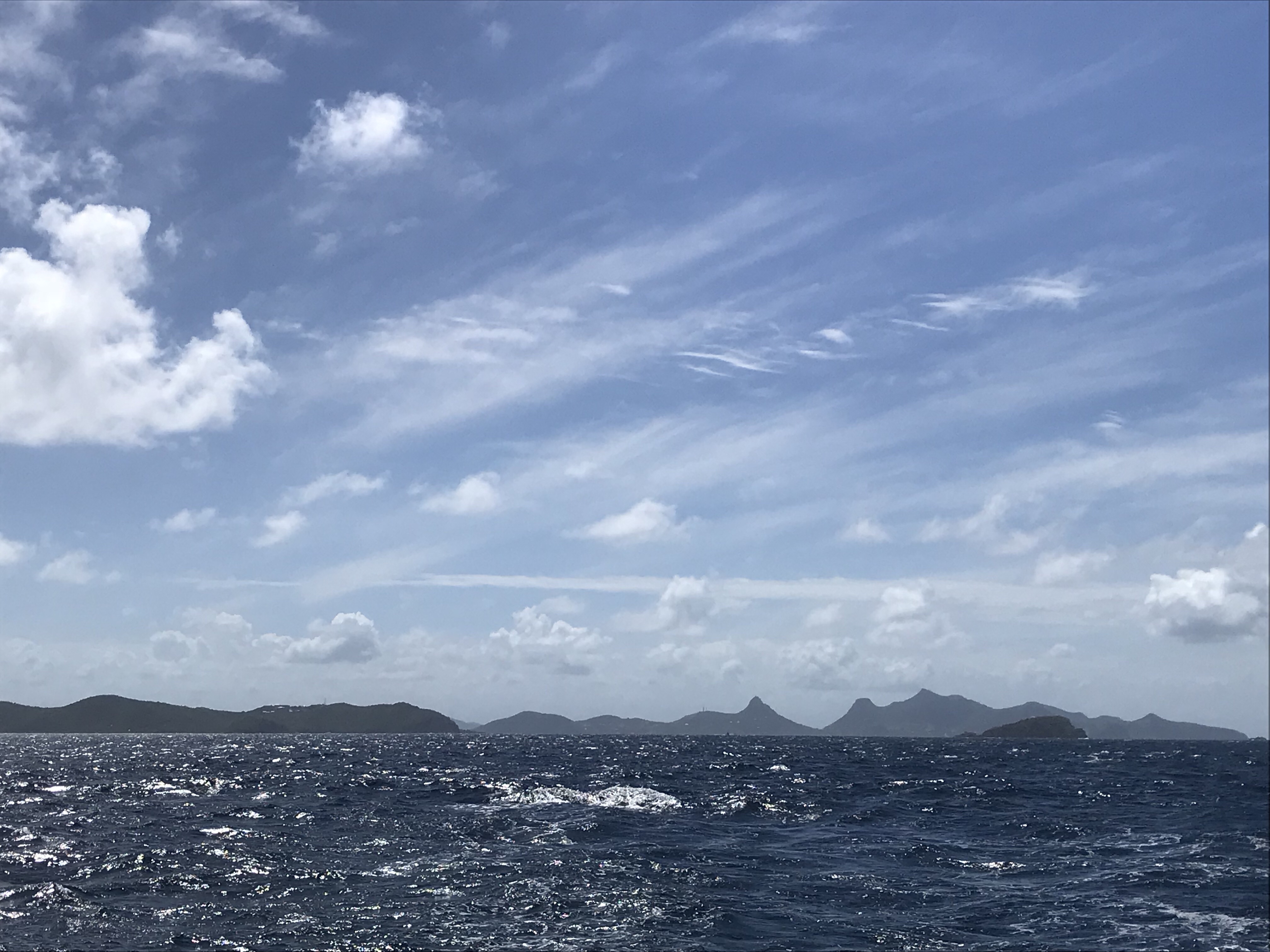 Ahh yachting.  We tested the bow thruster the next morning, before heading to the Cays.  Nothing.  Justin dove and discovered that the cover plate was cracked in half, not only preventing the thruster from lowering or retracting but providing a nice gap where water can seep inside creating pressure where there needn’t be.  We left Union in search of a calm mooring or anchorage so we could take care of that problem.  To the children’s general disappointment, we opted out of Tobago Cays.  The wind was high.  Reports from Chris Parker were calling for 10-15’ waves by the weekend.  We needed a safe harbor for at least the day, if not until Monday.  We choses Canouan.

We joke often about making good choices.  We tell our kids that that is our primary responsibility: to teach them to make good choices.  The beauty is if the choice is truly good, what you missed out on by making it pales in comparison to what lies in store because you made it.  We missed the Cays.  We missed the turtles.  We instead found a beautiful, still, and safe harbor where we regrouped.  We swam.  Justin dove the bow thruster and came back with half of the cover plate.  The other half was taken by the seas.  While we don’t have a cover, we now have the ability to move the super light bow in tight situations.  Justin found a solution to the sail drive issue of the gear failing to engage and while not perfect (until we can get it properly examined), it is now manageable. 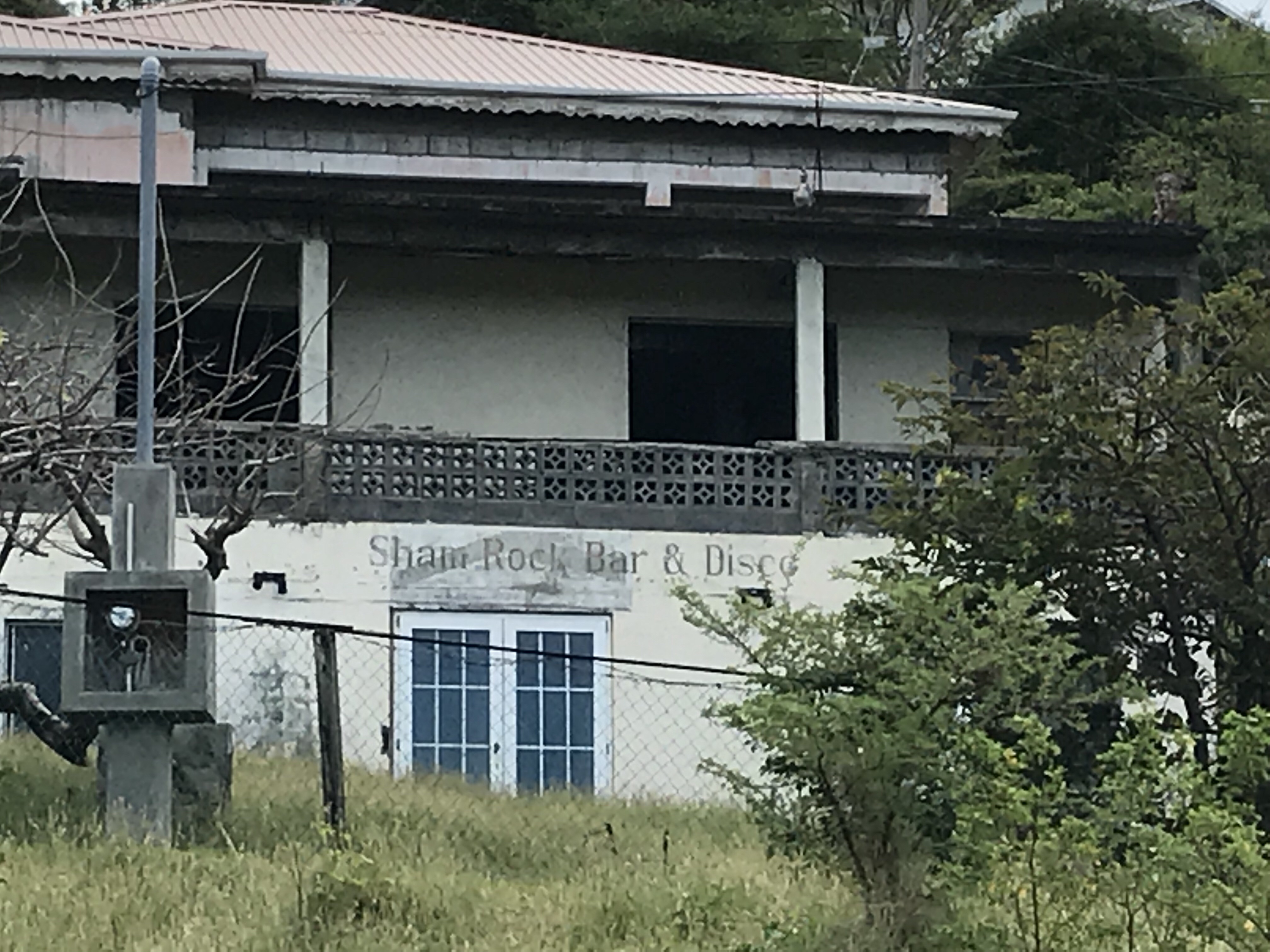 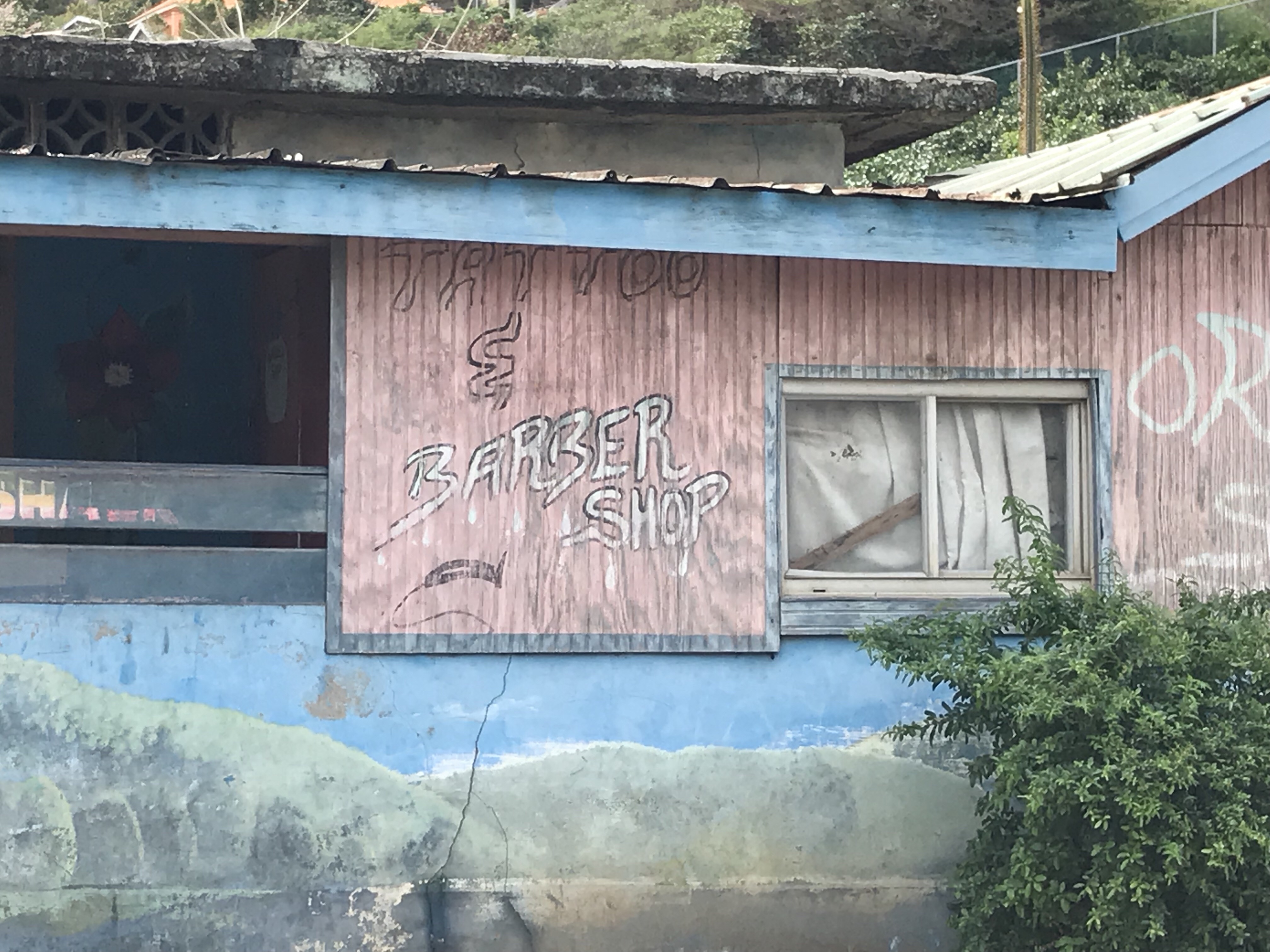 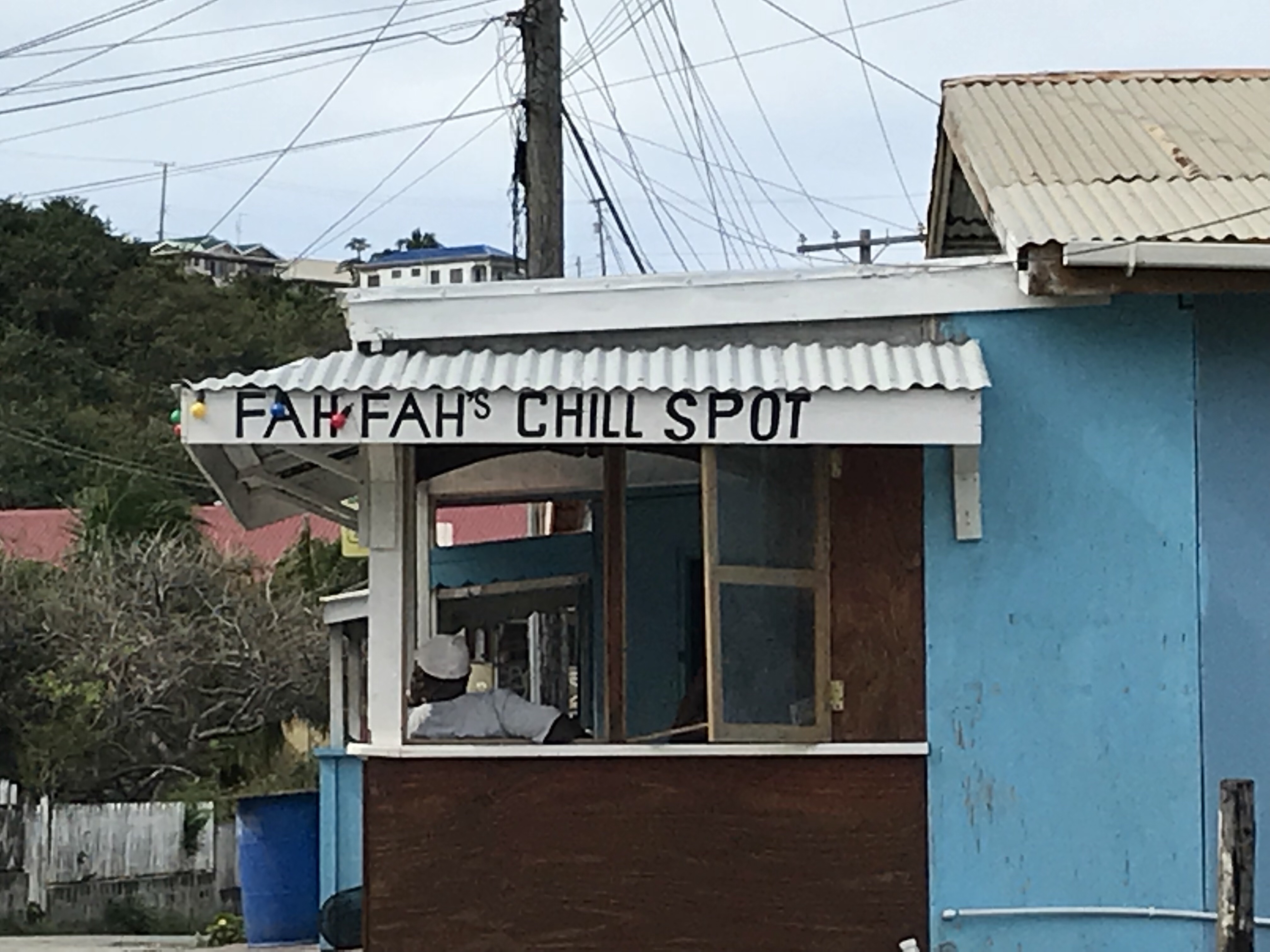 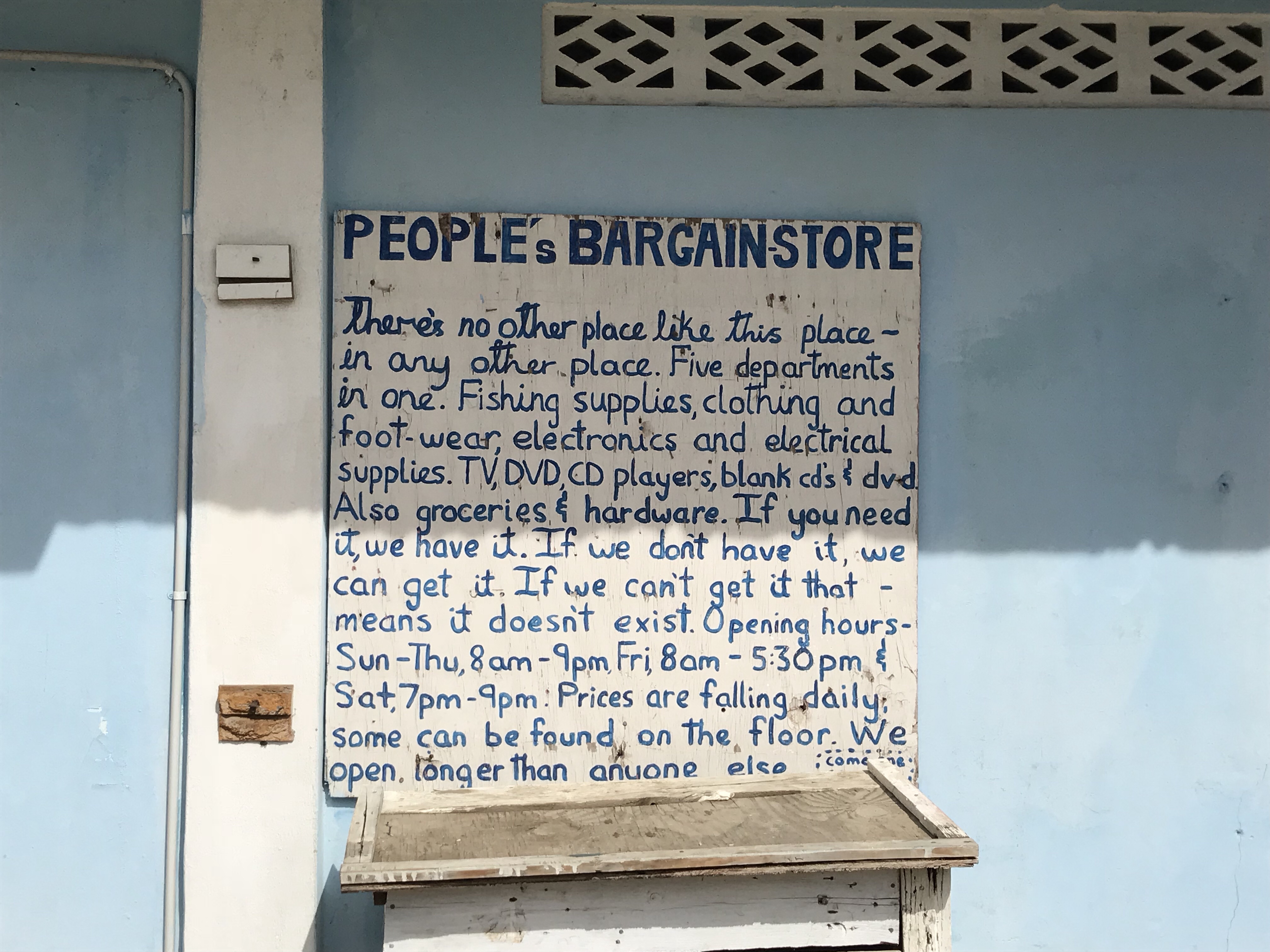 Fully rested the next morning, we headed into the village and found some meats, veggies and some very interesting signs.  We spoke with the kids about poverty and happiness, and about not needing much to make the most in this world.  We set off to Bequia by noon.  We raised the main, sent out the jib, found our point of sail, and turned off the motor.  The sea was calm.  The haul was smooth.  So many islands were in sight:  Petite Canouan, Mustique, Petite Mustique, Petite Nevis, Bequia, St Vincent.   We glided over the water, 15 knots of wind, dying to 10 knots.  Nice and mellow….wait!!  Spray!  Spray!  Spray!  Whales…black in color, many in number…moving gently along the surface of the water, heading south.    Humpback? 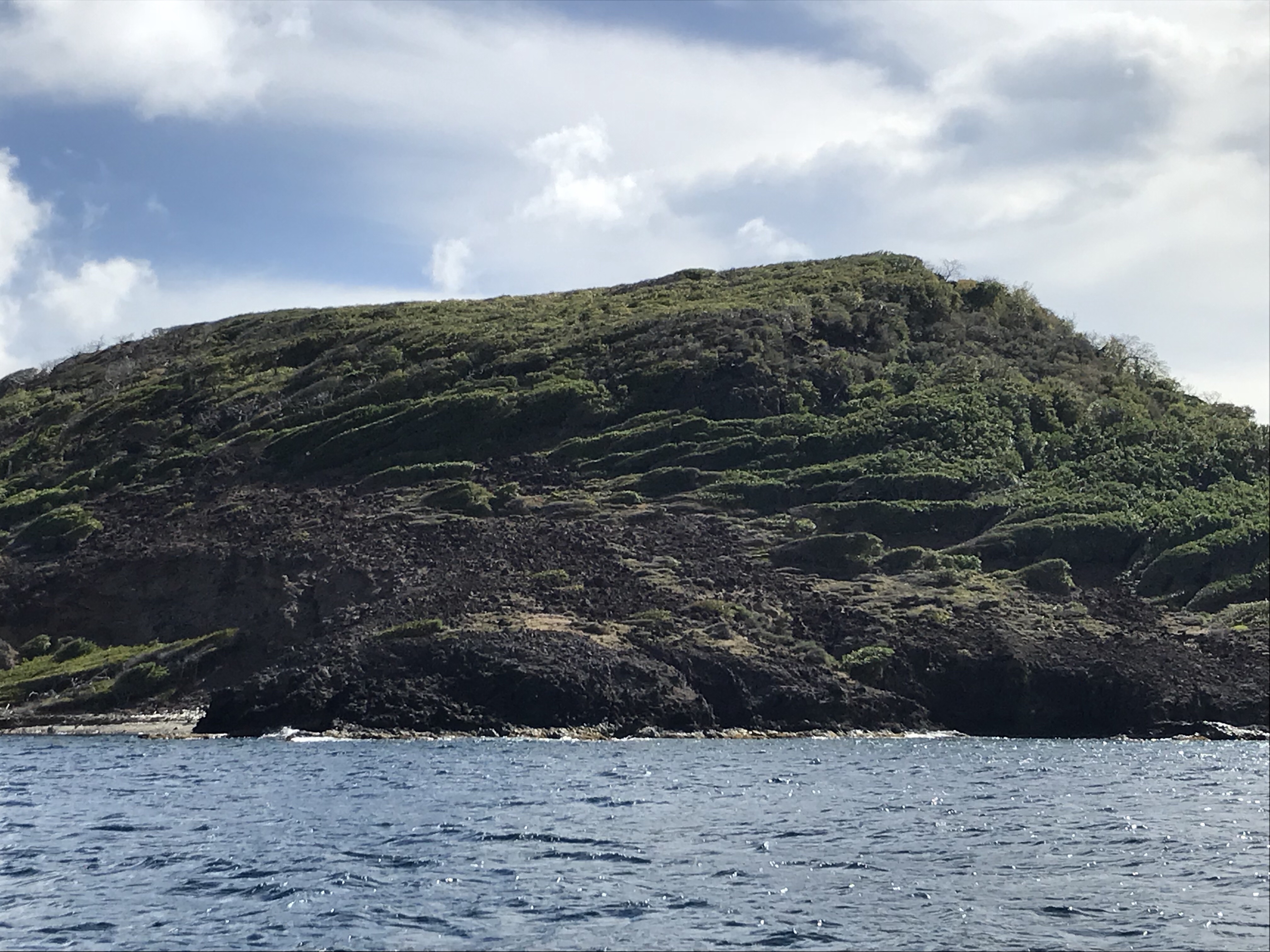 We chose to motor toward Bequia as we had fallen off quite a bit and were interested in saving some time.  We had not yet been to Friendship Bay and thought we would stay there at least the night.  Alas, we make good choices, and as this harbor contained only one sailboat (a charter) and its mast was pitching side to side, we chose to head to Admiralty Bay instead.  And today, after a perfectly restful night at anchor, with the intention of staying through the weekend, we feel we have indeed made a good choice. 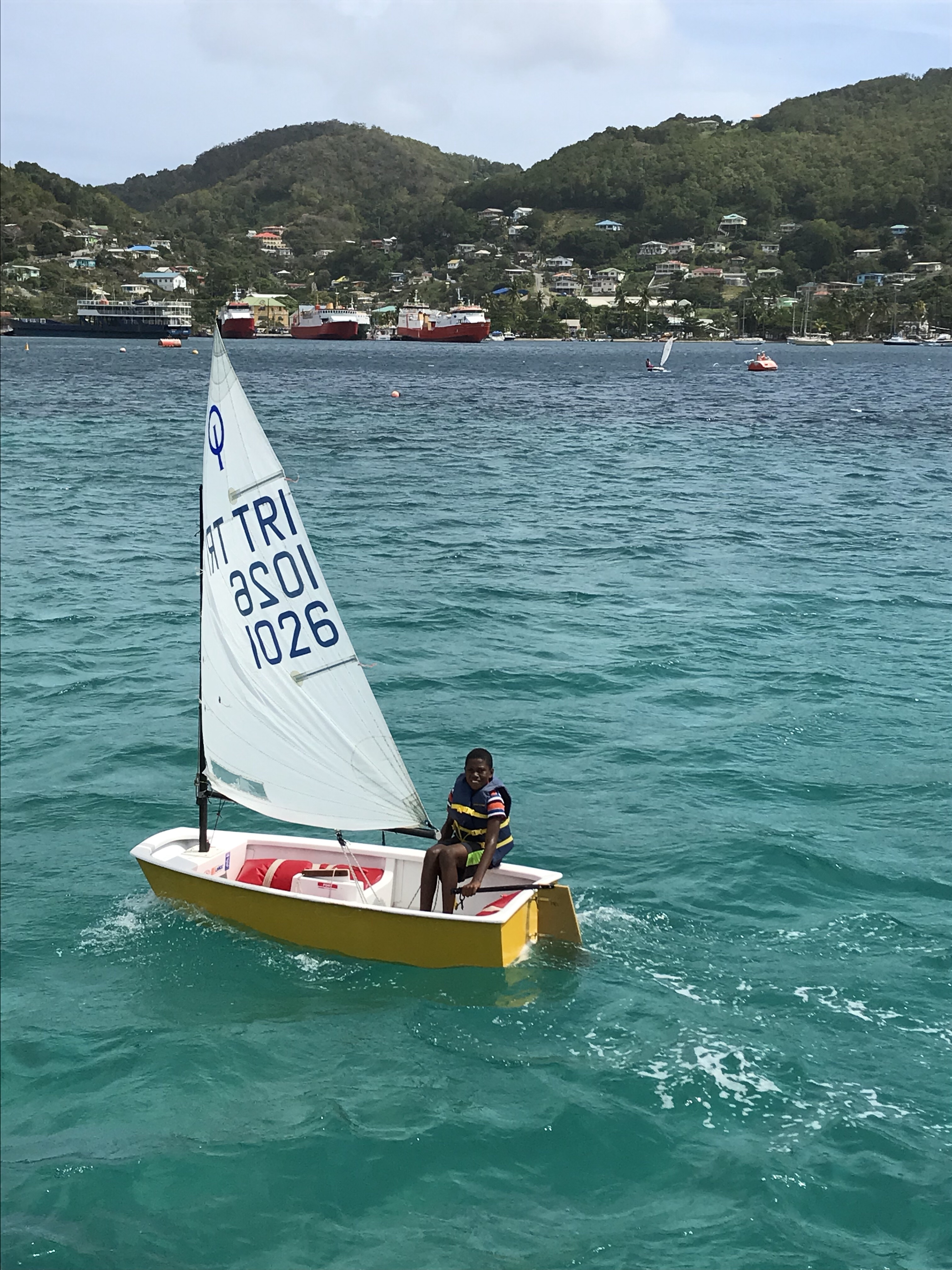 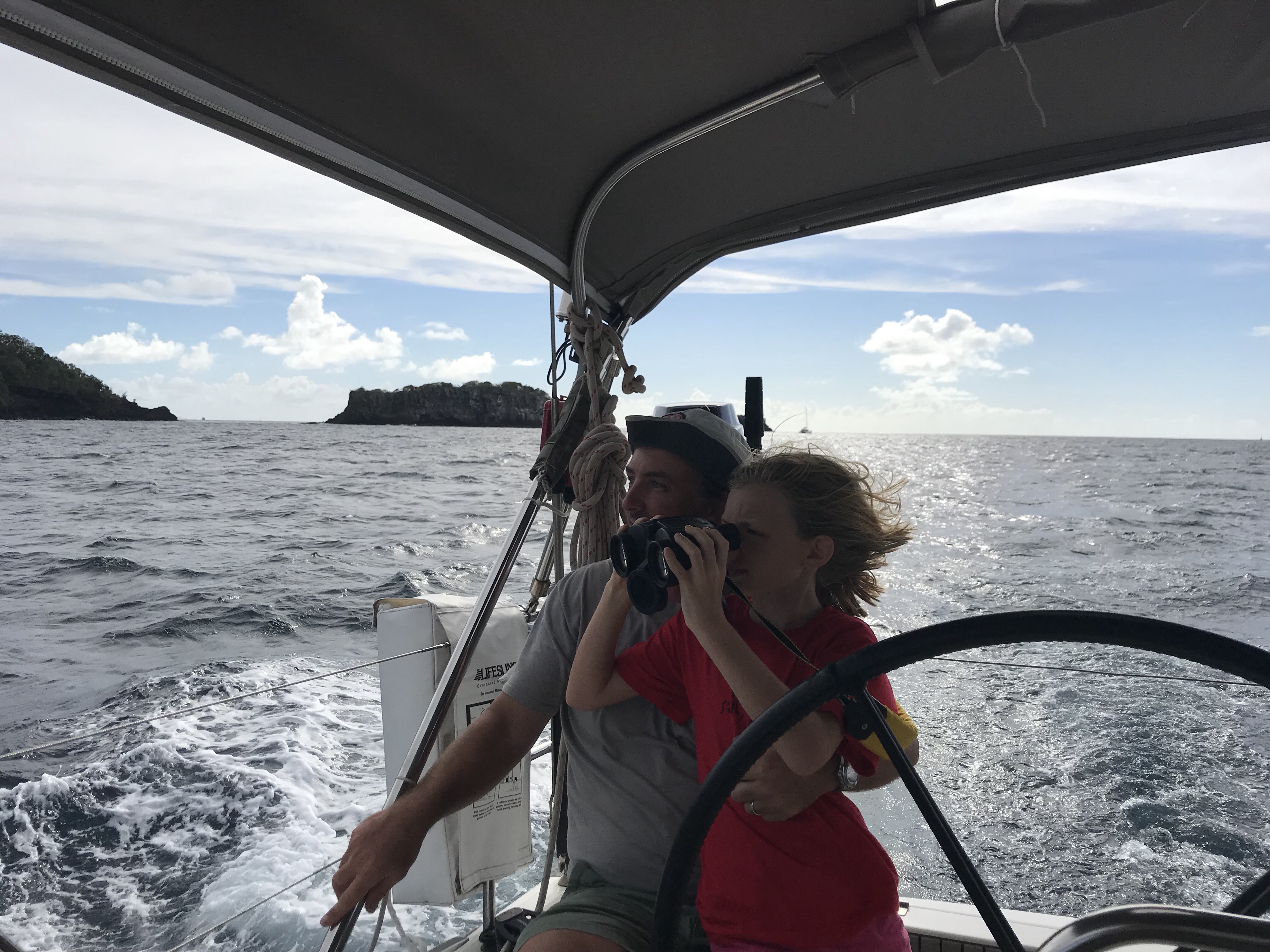