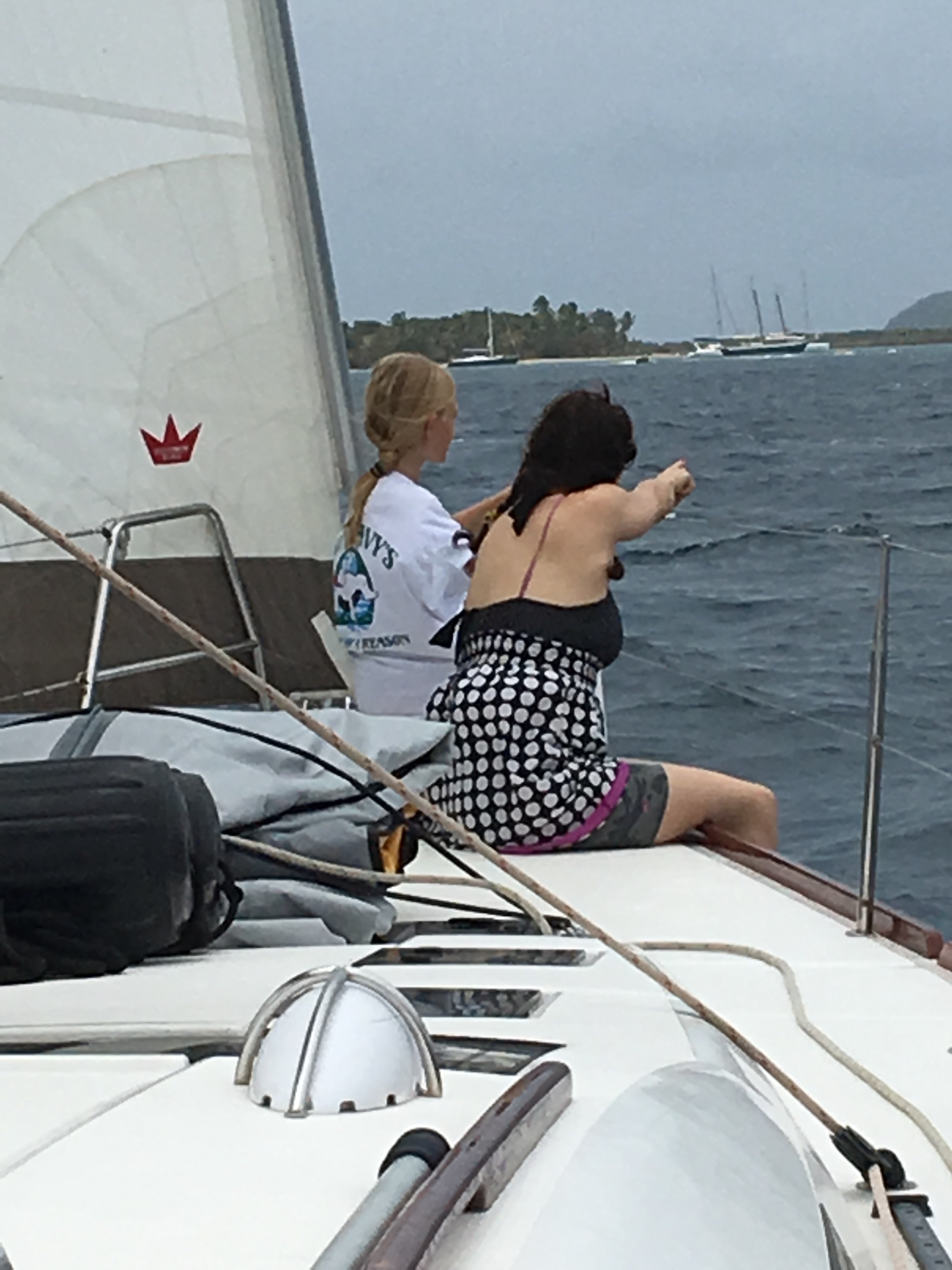 Our stay in Union Island was brief. We stayed long enough to provision, lose the generator (lots of reef life in the water ends up in the seacock which makes for a wet captain, followed by a running out of fuel issue (seems the generator feeds only off of the one tank)), and find entertainment back on Happy Island. We left in the morning to head to Tobago Cays.
The passage was a quick, albeit bumpy, motor. All eyes were on the sea as the reefs were abundant. The charts looked good but when you are floating a boat between breaking surf with several small islands in sight, it is best to keep visually vigilant. We passed through the Southern Exit (how do they know where we’re going?!) and arrived in the serene turtle sanctuary off of Baradel. The water was so clear, the mooring field so shallow, that the sea floor seemed touchable. Gherty and Quinn quickly took up the challenge. A few dives in and they found the bottom at ten and a half feet, bringing up some seagrass as proof. 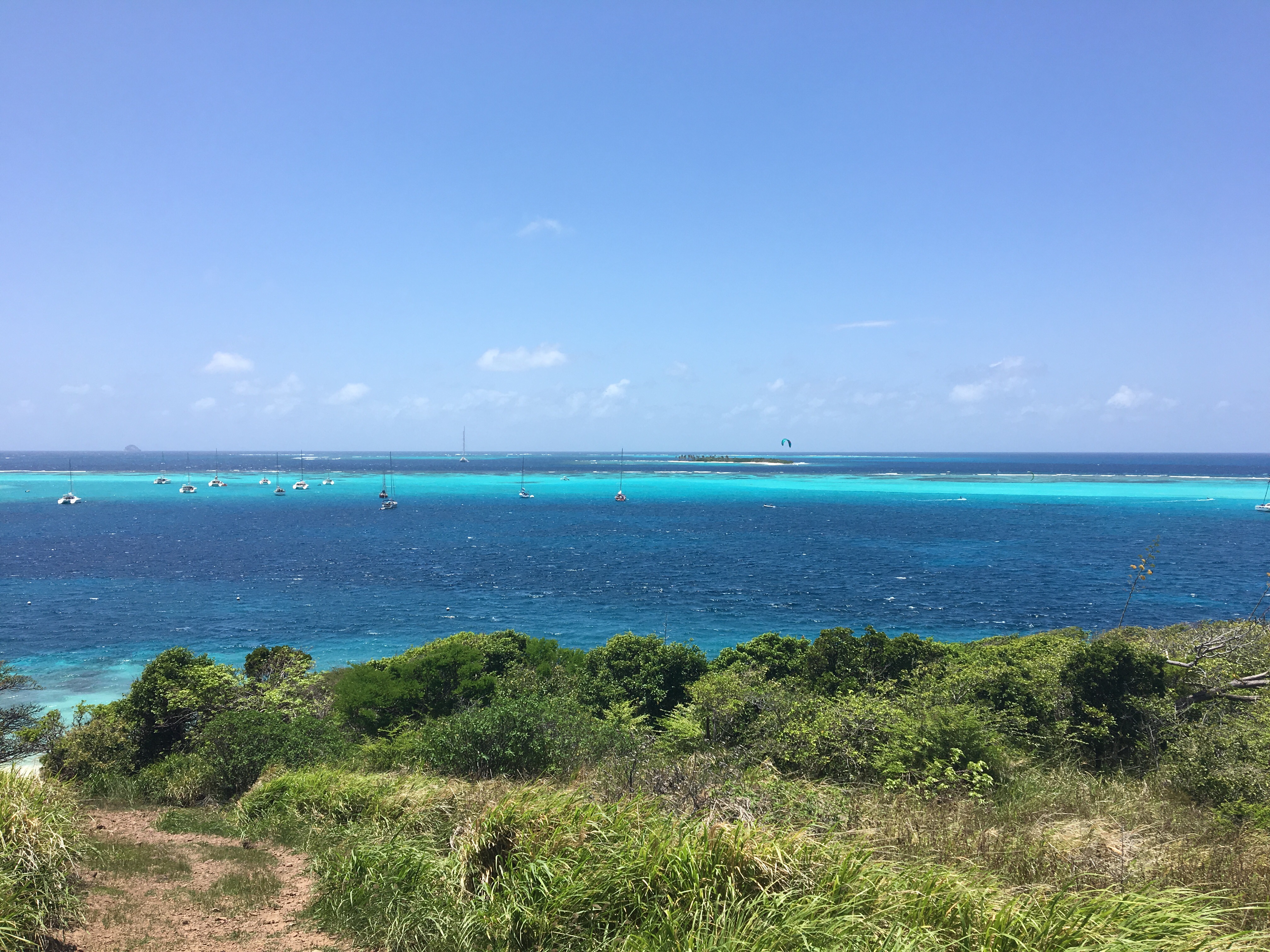 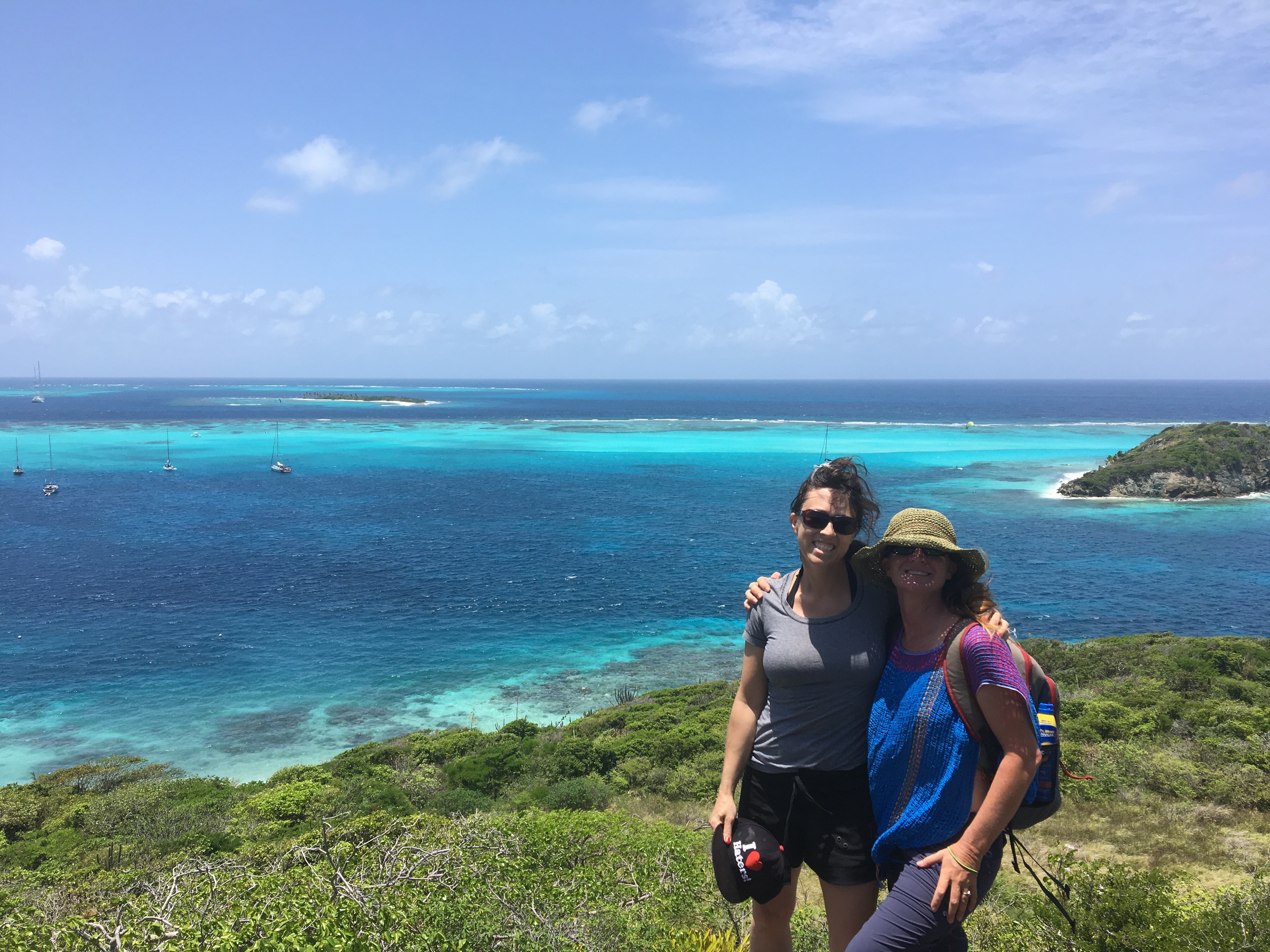 The Cays were a lovely example of incredible, contrasting layers of the blue sea: colors so deep they carried the depth of the surrounding ocean, and then some so pale, they brought to mind a comforting call. What was truly beautiful was to be anchored in the calm and see the subtle white breaks noting the reefs’ protection from the deep dark open blue. Add some small uninhabited islands to the background and you have a natural and completely still shot of the beauty nature provides.

Aunt Kelly Baldwin was pleased. We were pleased. We counted the number of turtles we could see from the boat. We counted the number of turtles we touched. The kids kayaked ashore and brought back treasures. We kayaked ashore and found even more. We dinghied to another shore and went on a little hike (I MEAN IT!). The view from the top of the island was gorgeous. The kids carried on and kept exploring, finding a path to the other side of the island where we were to have a barbeque later. 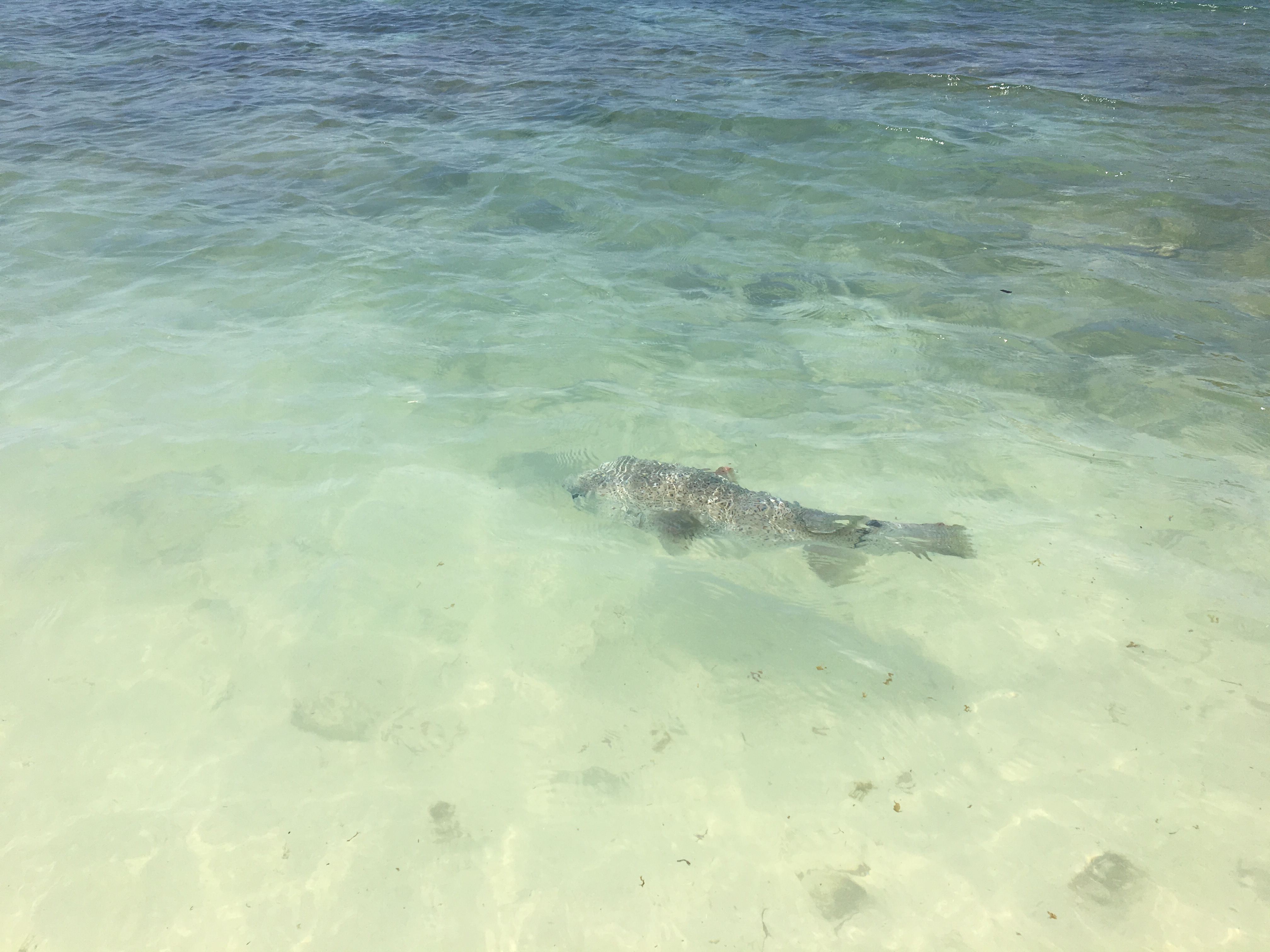 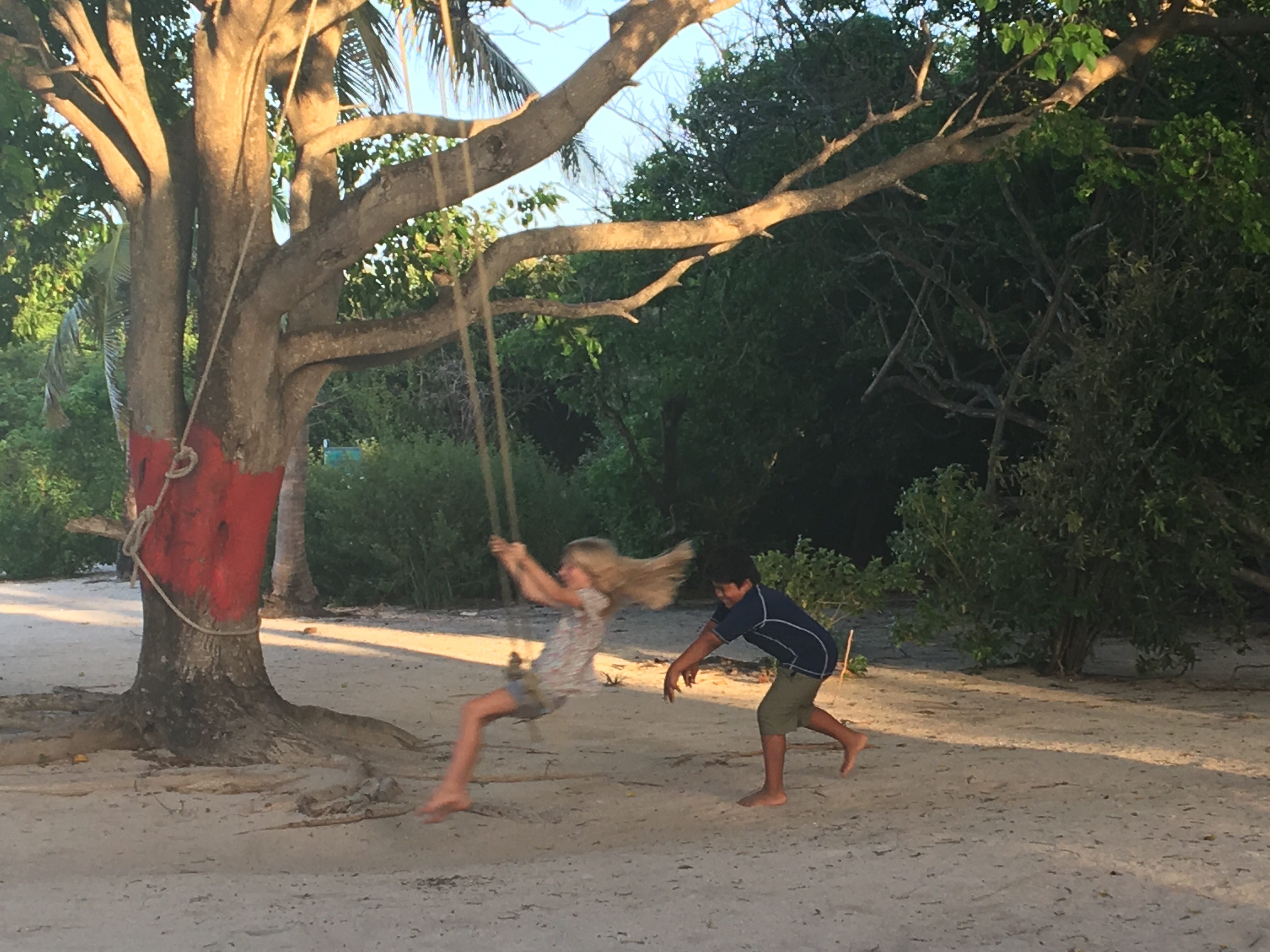 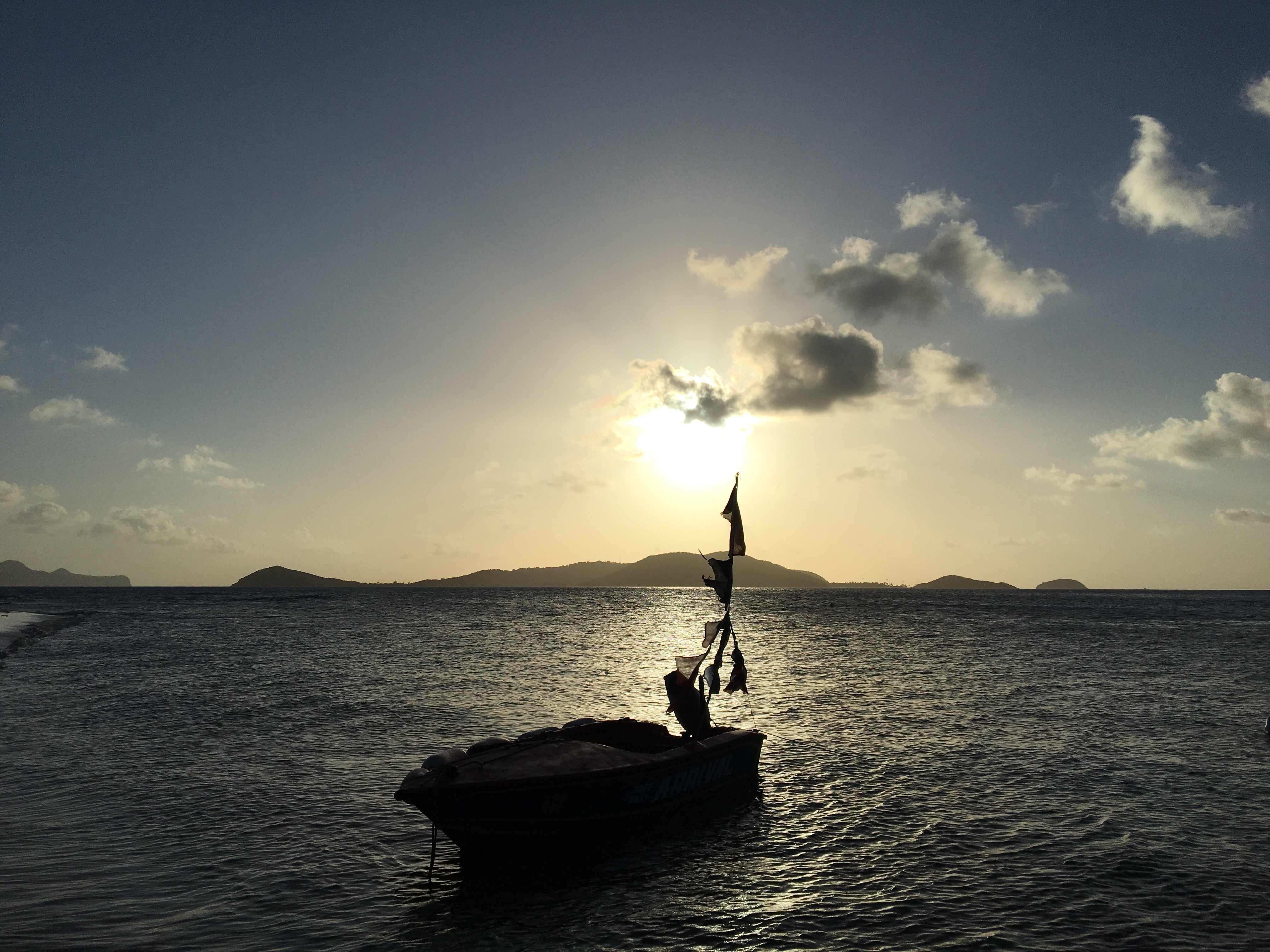 Puffer fish, leaping string rays, diving turtles, and treeing iguanas held much of our attention. But we had an issue to resolve. Gherty mentioned a bug bite that was hurting. Upon inspection, and quite a number of texts, we realized that it would be best to get back to Grenada as quickly as possible. We had the proper antibiotics but had to let the infection drain. Sparing the details, Gherty is one tough girl and I am one mean momma. Operation Save Gherty’s Bum was commenced but I felt much more comfortable getting back to Grenada quickly…just in case. 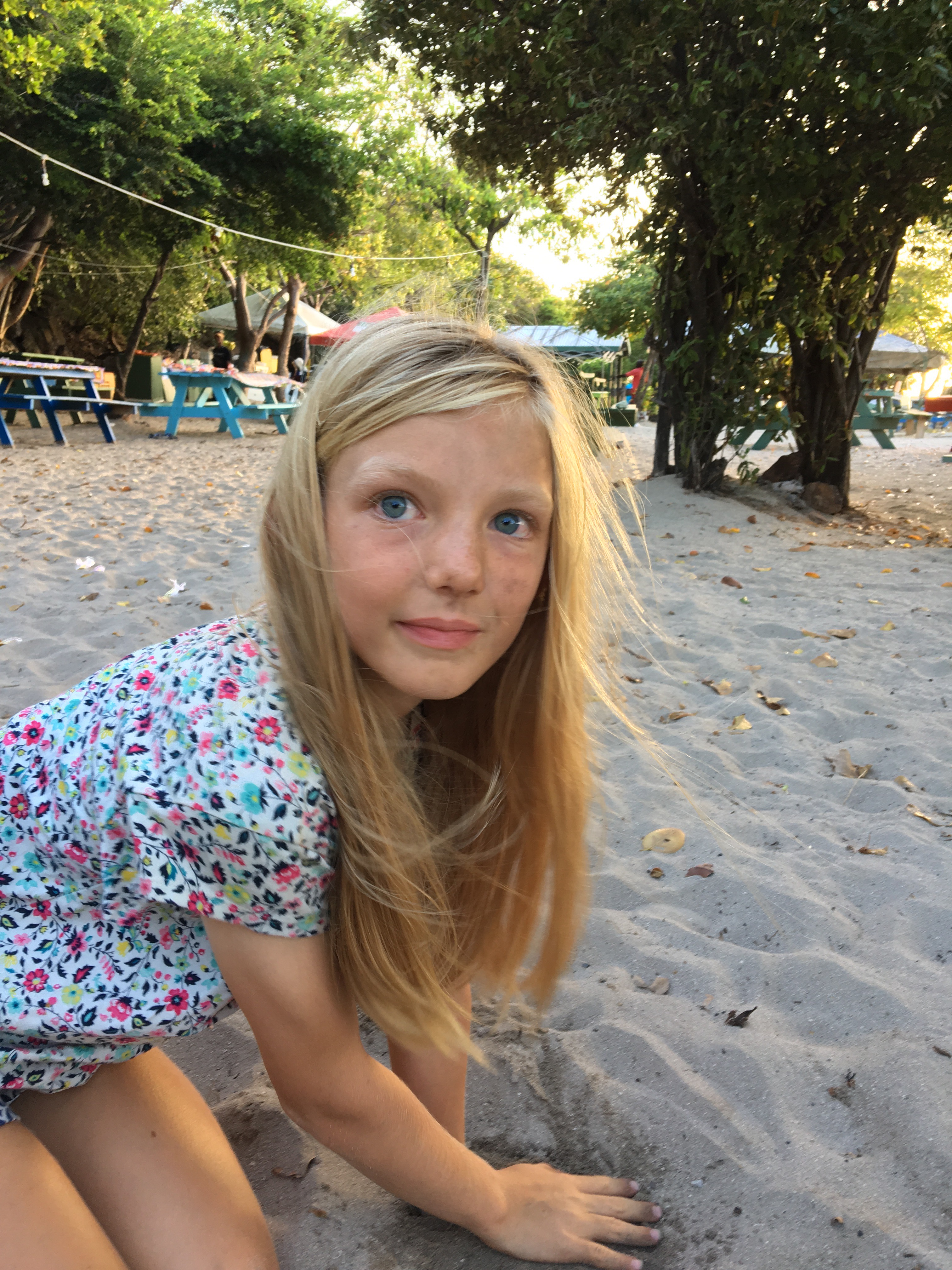 With a quick stop back in Union, and after a bit of a stand-off with a mooring specialist, we set sail back to Grenada. We simply flew, often just under ten knots. In just five hours, we made it to the southern side of Grenada, at Prickly Bay. In need of fuel and water (generator still not working), we were hoping for a slip but settled for a stop at the fuel dock to fuel and water up, and grabbed one of Prickly Bay Marina’s moorings. We were not exactly legal as the customs office chose to close (hours are a bit optional in Grenada it seems) but were allowed to hang on land on the marina grounds. We couldn’t get legal for trying. Justin took a taxi to the botanical gardens (where customs was open until midnight) but the agent there just would not clear us in. “Just do it tomorrow at the marina.” Justin had found $100EC a couple of days prior and so what comes, goes…sometimes without meaning or value.

We rented a car the next day and began a couple day exploration of the island. Engage navigation seat and white knuckles. Check. It is an odd thing to have a simultaneous hungry and terrified nature. The roads, while not quite the ‘what road’ condition of Dominica, provided ample opportunity for a brake and tire company to make lots of dollars. I only felt like we were going off the road (which often meant off the cliff) a couple times. AKB can attest: I handled it like a champ and luckily, Justin is a competent and confident driver. 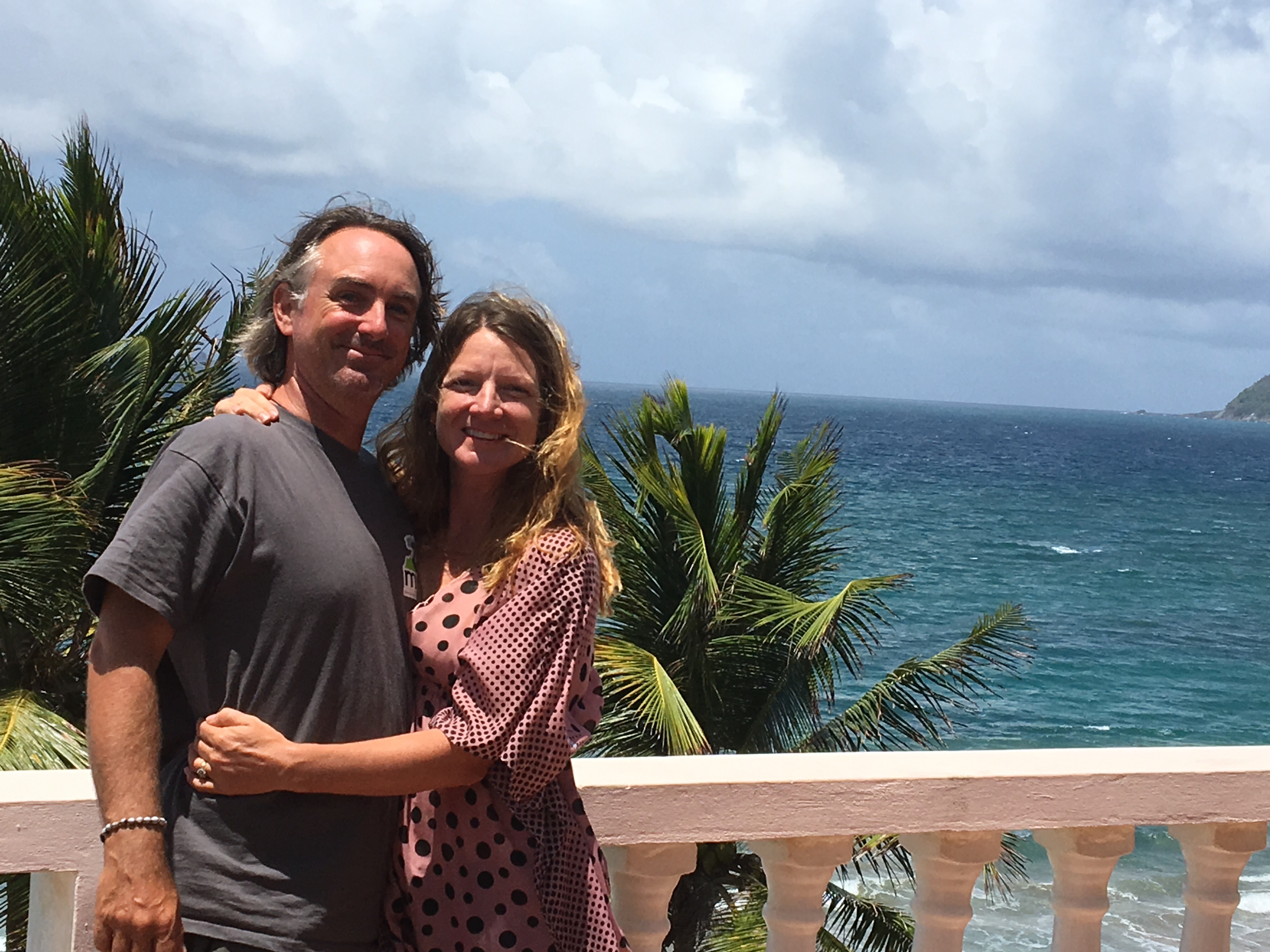 We found our way up to the north side for a lovely lunch overlooking the many islands of Grenada and the Grenadines. We watched as a couple boats battered their way north. The wind had picked up and with it the rain. The kids explored the garden paths leading down to the beach and we enjoyed a lovely barbeque. In the rainforest, we found a fall and went swimming. We found a lake, and did not go swimming. We took roads that may or may not have been traveled in several days, weeks, months… The way was beautiful but not exactly calming.

For many islands, since Dominica, Gherty and I have been searching for an opportunity to do a little ‘Mom and me’ time on horseback. Since we had reached the southernmost point of our journey and we were hauling the boat out shortly to fly home, we were rather intent that Grenada provide this. Since AKB had a bit more experience on horses than I did (I honestly think I was ten the last time I was on a horse…but I was really good at it), we were excited that she would be able to join us. Another breath-holding trip into the rainforest found us up a rather missing road that led to the horse farm.

Aunt Kelly Baldwin had arranged for our riding. I could only hear her side of the conversation but excerpts included: “No, we don’t want a donkey.” “She is nine but she wants to ride a horse.” “Fine. We will take two horses and a donkey.” When we arrived, we met the donkey and agreed that I would ride her. We were surprised but pleased to hear that actually there were three horses: a stallion (who HAD to lead), “Barron”, a nervous (“doesn’t like to leave her friend”) mare, “Princess”, and a “all the kids ride her” mare “Applejack”. AKB, being the most skilled rider, was given the stallion (who looked a bit angry if you asked me). I was given Princess (who looked rather skittish) and Gherty was given Applejack. 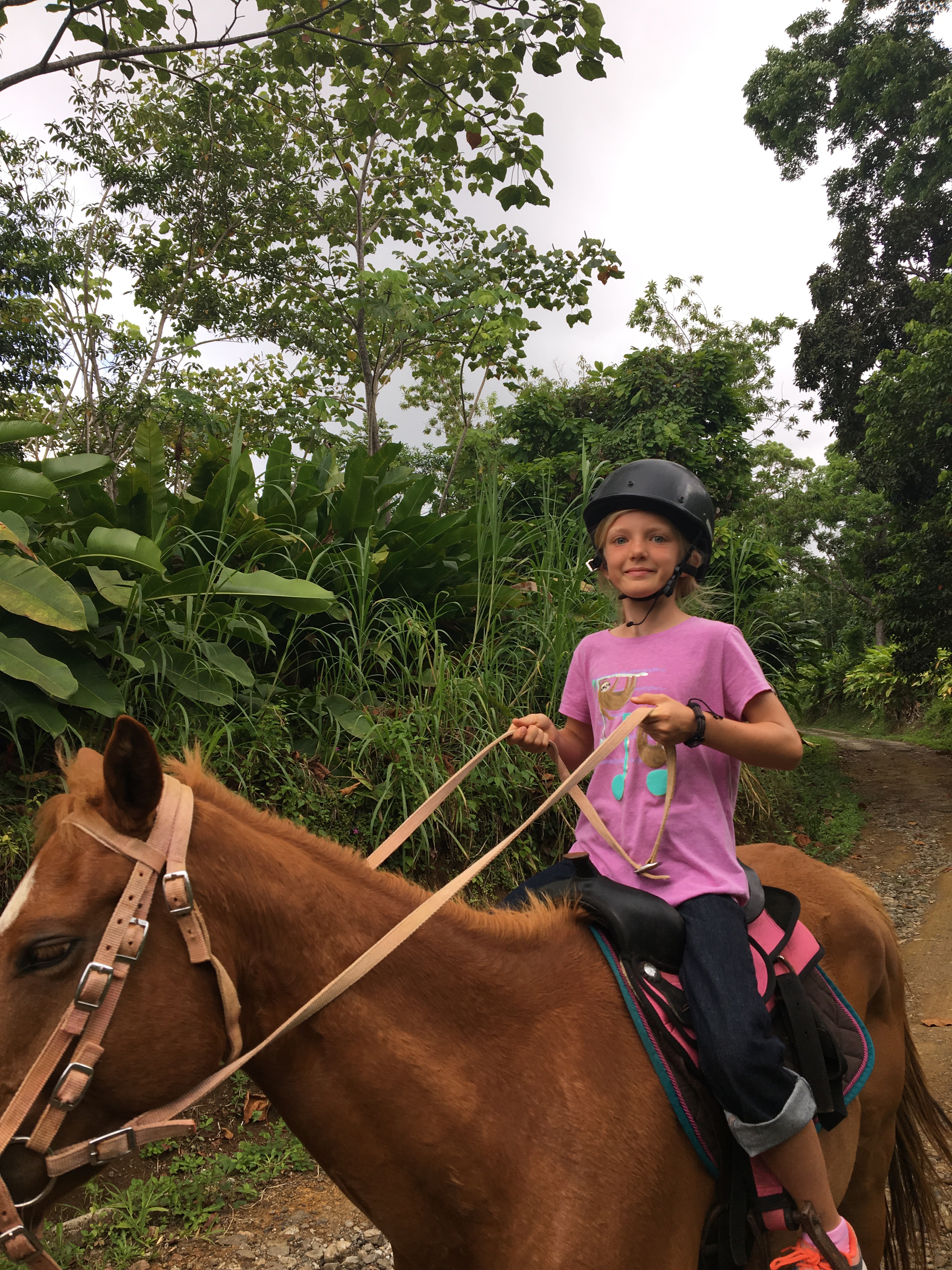 We were given a walking guide, who turned out to be a running guide. He was amazing, literally running in crocs the entire six miles of trail (which included rocky road that had washed away with the rain, tall grassy trails, and much more!). Gherty was truly wonderful. She was all smiles and excitement. She walked her horse. She trotted her horse. She ran her horse. She stopped her horse. Sometimes the guide handled her; sometimes she simply followed AKB and her stallion. Of course, I only know this because I ran after them.

Getting Princess off the farm was a bit difficult, which I accounted to her not wanting to leave her pregnant friend. We made our way behind AKB and Gherty, but within a short distance, Princess began to walk off the road into the ditch. I tried to steer her back to the trail. She would walk a bit, then move back to the grassy ditch that was inconsistent in its depth at best. The guide helped to steer her back, at the same time informing me that she has an abscess on her leg. When she started limping, I realized there was no way I was staying on her. I hopped down and said that I would walk. He tied her to a tree and as I walked, then jogged along, he said that she might break free and go back. I sent the text: If the horse comes back ahead of me, I am fine. Love you.

I was in jeans. I was running for miles, behind a couple of horses, when I caught up and found AKB off of her horse. Gherty was the only one who made it for the entire ride. I found out later that the saddle was not exactly belted on AKB’s stallion and so she literally rolled off the horse, leg stuck, body dragged. But unwilling to let a cliché get the best of her, she got back on that horse. I swear I really love AKB and I do not intend to kill her. 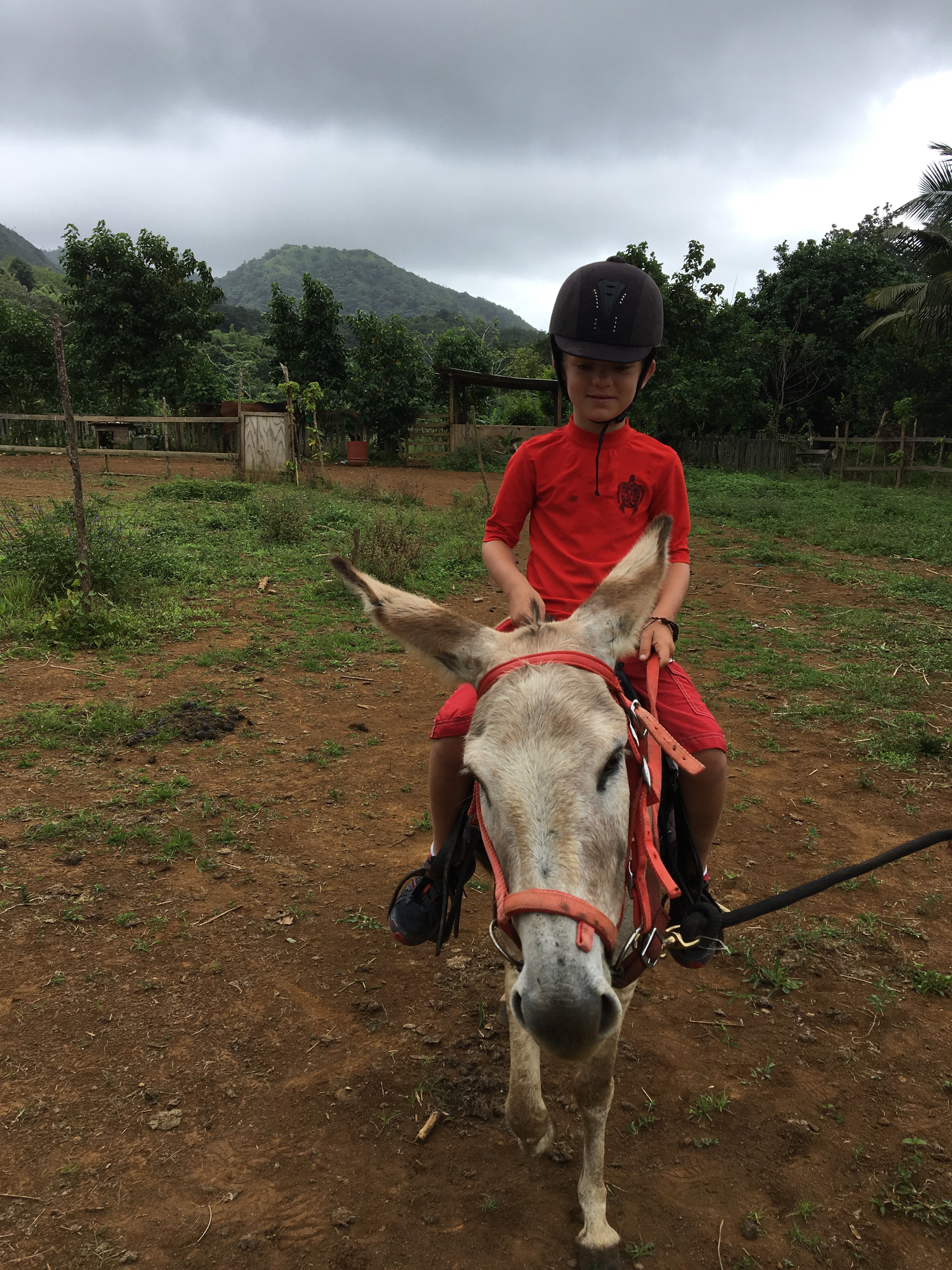 Meanwhile, back at the boat, we still had no generator…we were having to run the engine to keep the battery alarms from going off in the night…and I was getting no sleep. We opted to squeeze in an overnight trip to the Underwater Statue Park at Moliniere Point. With just a few other boats at the nearby mooring field, we settled in for a stellar evening and morning. We dinghied over to the point and snorkeled among various statues displayed in the sands between reefs. People facing out holding hands in a circle, a man at his desk, a divine figure, and a girl praying were all weighted in the water. Art was giving back to nature.

The day had come for AKB to return to Charleston and so we began the trip back around Saline Point and toward a bay with a marina where we could get AKB to a taxi and at least get electric while we waited for some help on the generator. Cue the waves and send the children to the bow. The wind on the nose made for a delightful, exhilarating ride with kids partially submerged and then seemingly flying in air. 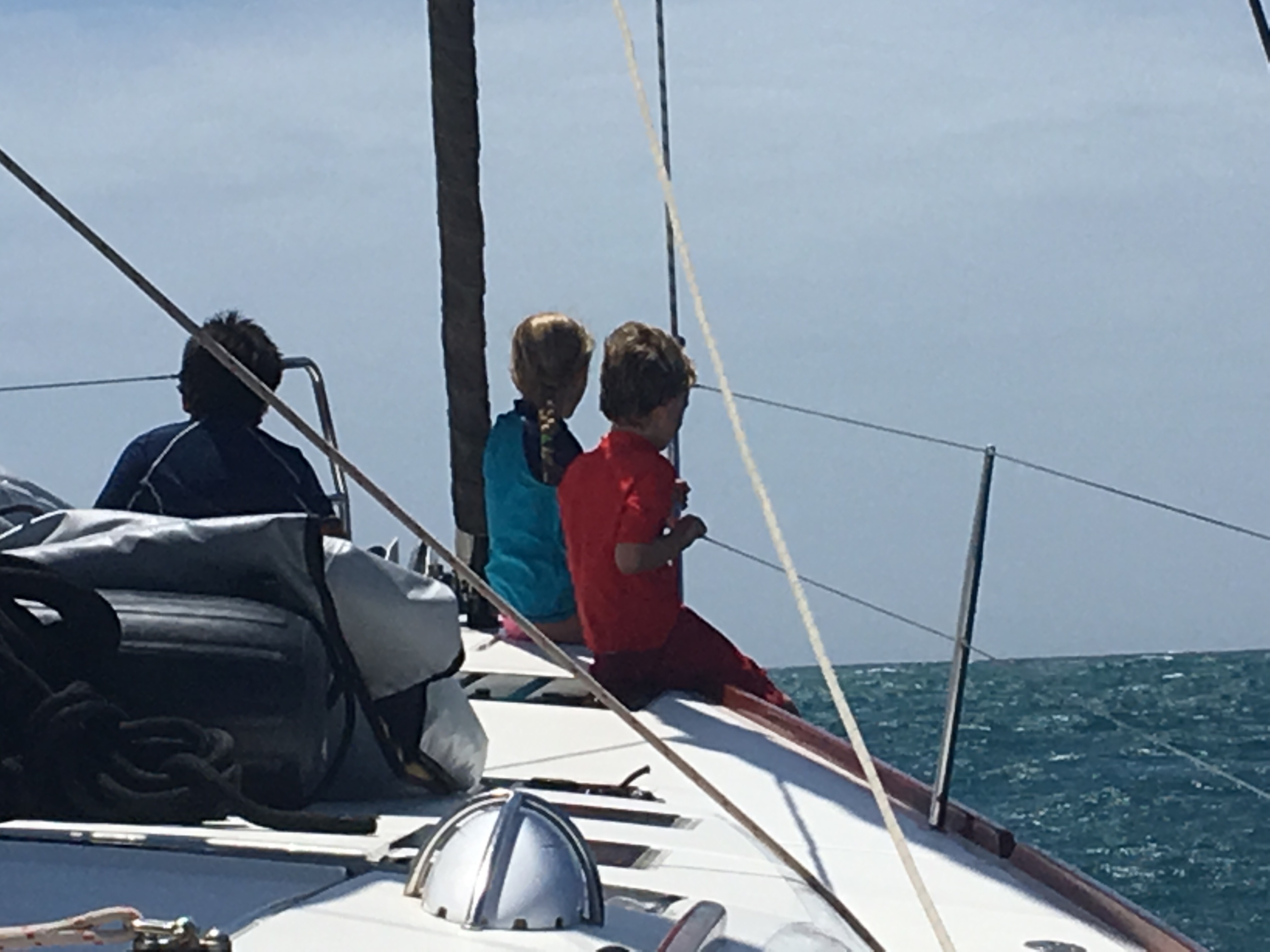 We found our way to Clarke’s Court only to find that they did not have American electric. We did manage to fix the generator, and then unfix it; and ultimately we decided to go to the NEXT bay where it seemed they had a marina that not only would fit us but had the electric we needed. Phare Bleu exceeds expectation. A light ship from 1901 is docked within ten feet, offering showers, bathrooms, a bar/restaurant, lounge and incredible jazz music. We have found the perfect place to take our time getting Madame Geneva ready to go on the hard at the end of the week. 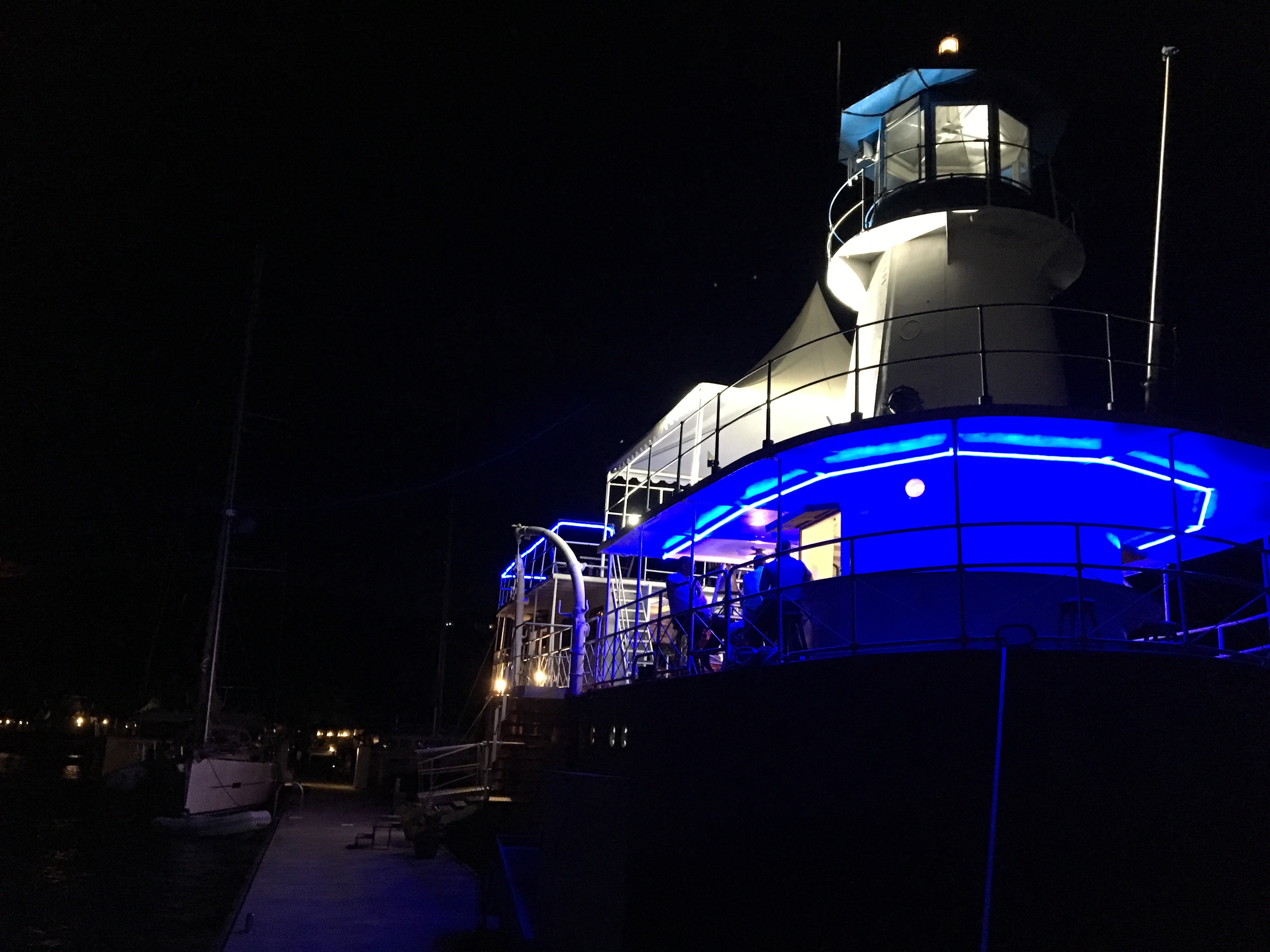 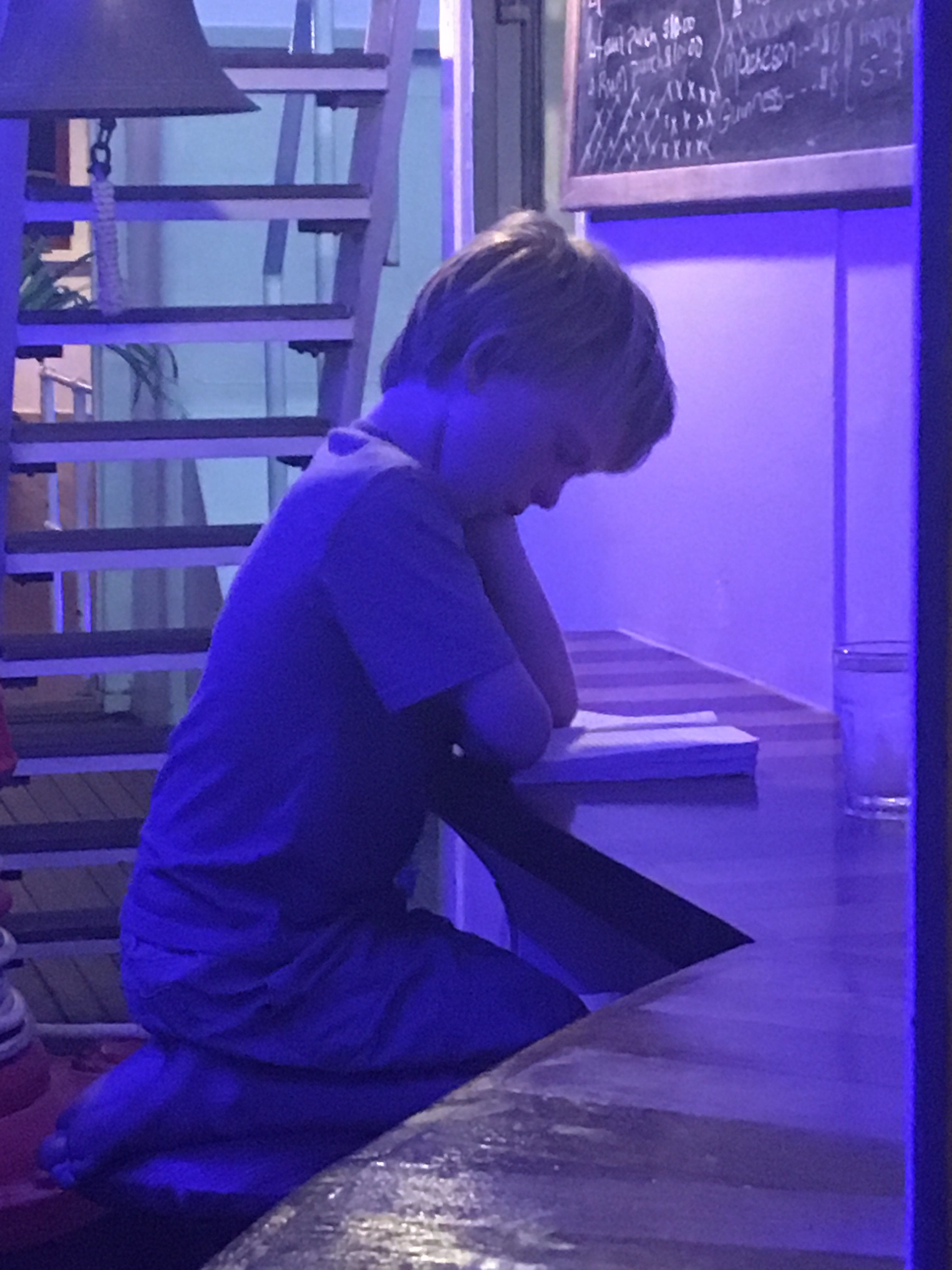 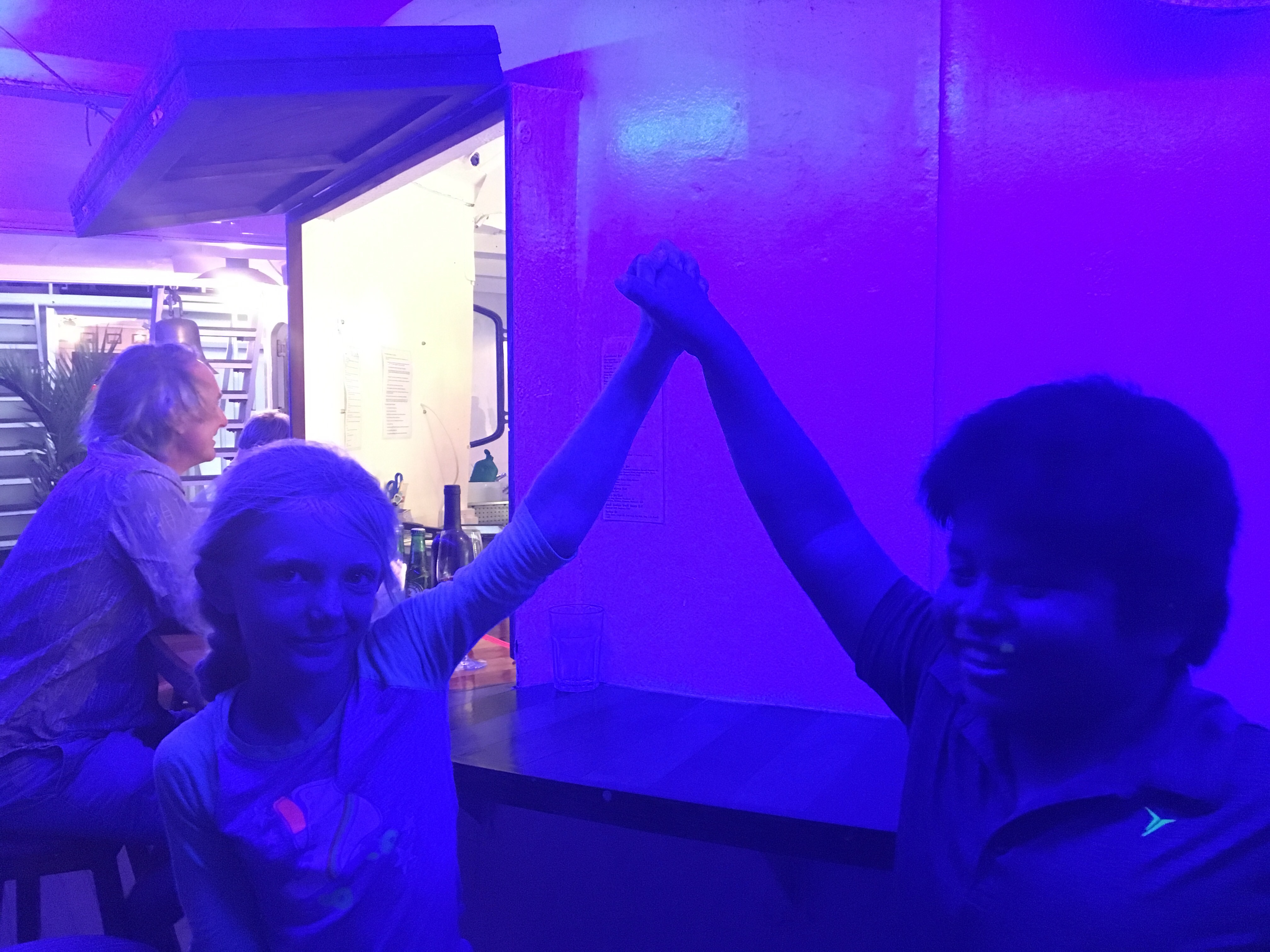 Stay tuned and much love.