The morning moves gently around us, here in Nonsuch Bay. The bow, pointed out to sea, is tied neatly to a mooring just yards away from the reef that keeps our boat settled. The pounding of the surf against the barrier is loud and yet lovely. What a strange thing to have inflatable kayaks tied to the stern when your lookout to the ocean includes whitecaps and a broken horizon. 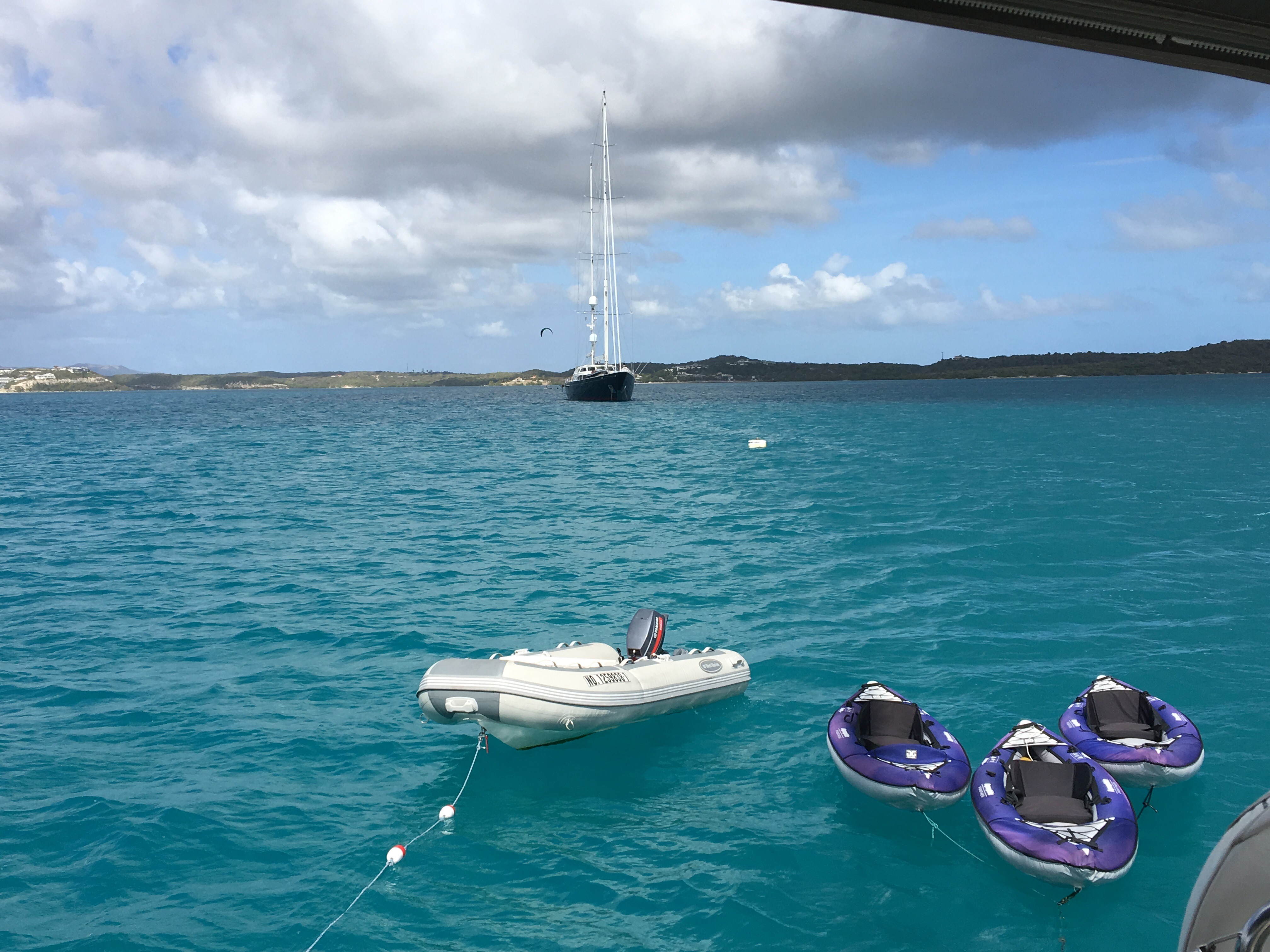 Our departure from Fallmouth yesterday was quick in the taking, meaning we opted not to do another grocery run as our refrigerator is still not working nor did we need to clear out of Antigua just yet as our pass is good for another ten days. We dropped the line from the mooring and set off. The wailing wind had died down and we figured a quick ten mile hop to the eastern side of the island, with its remote and still bay would do us a bit of good.

Our time in Falmouth was lovely. Some photos of the various hikes around are here…we will be back. 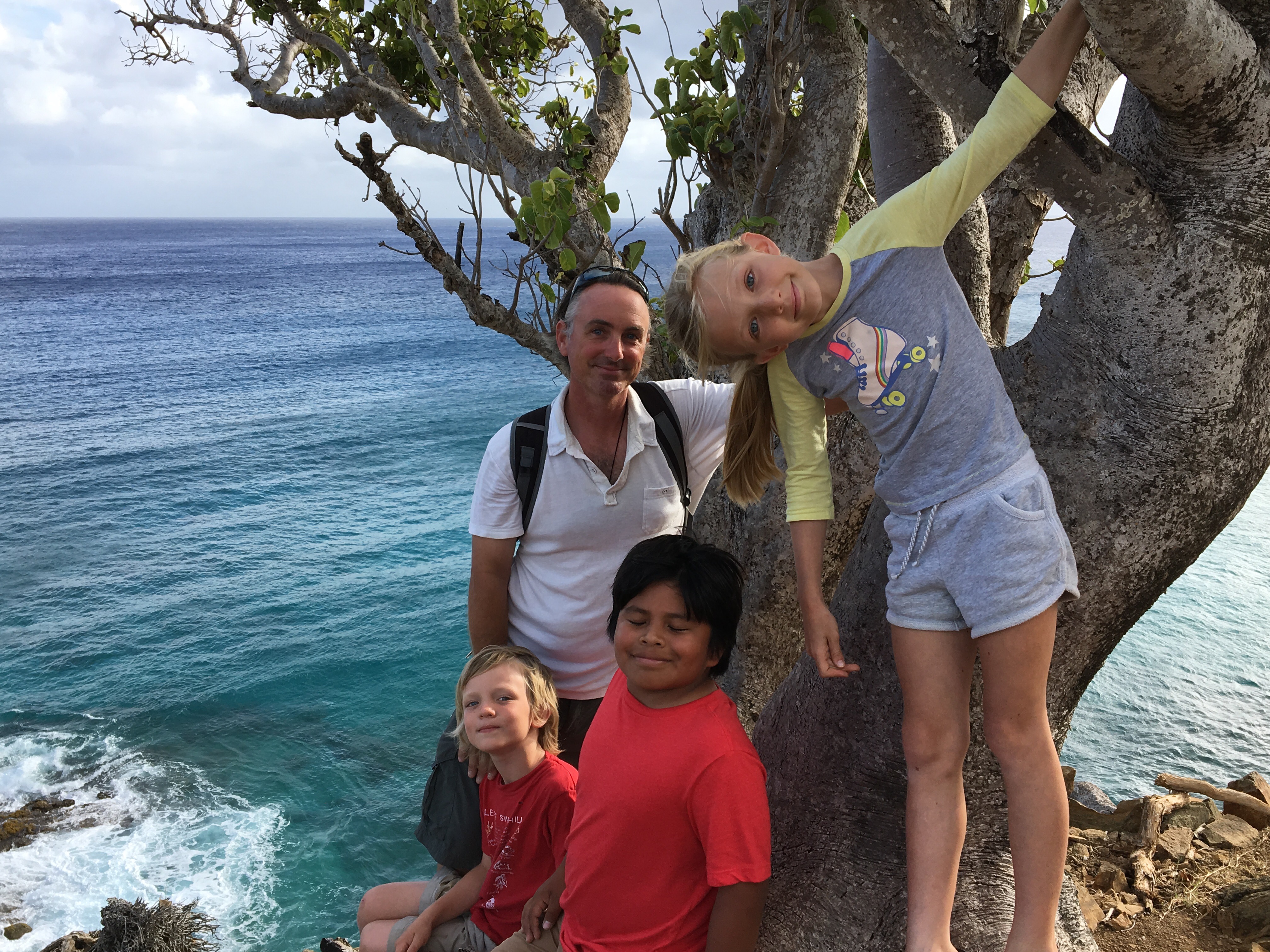 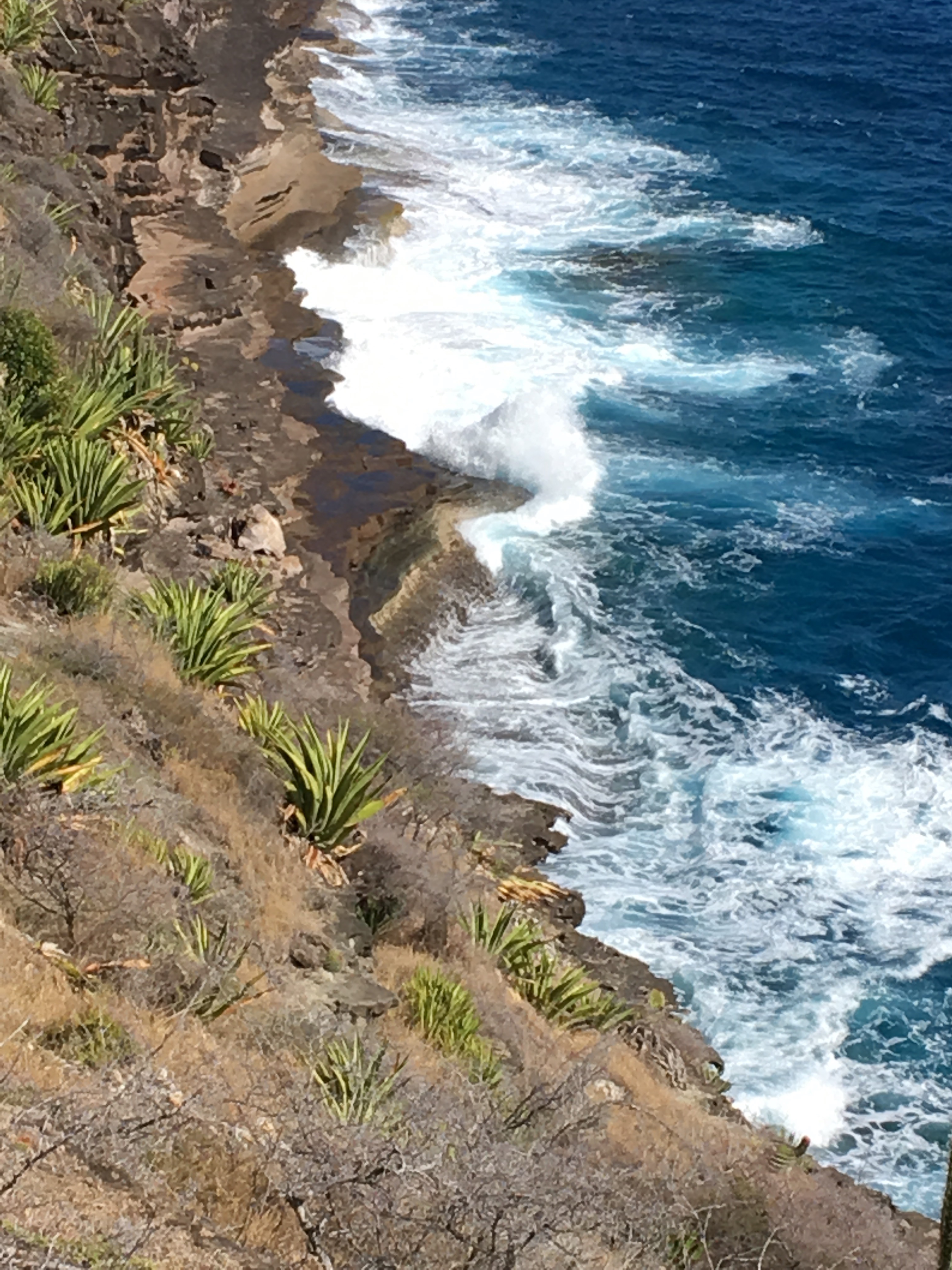 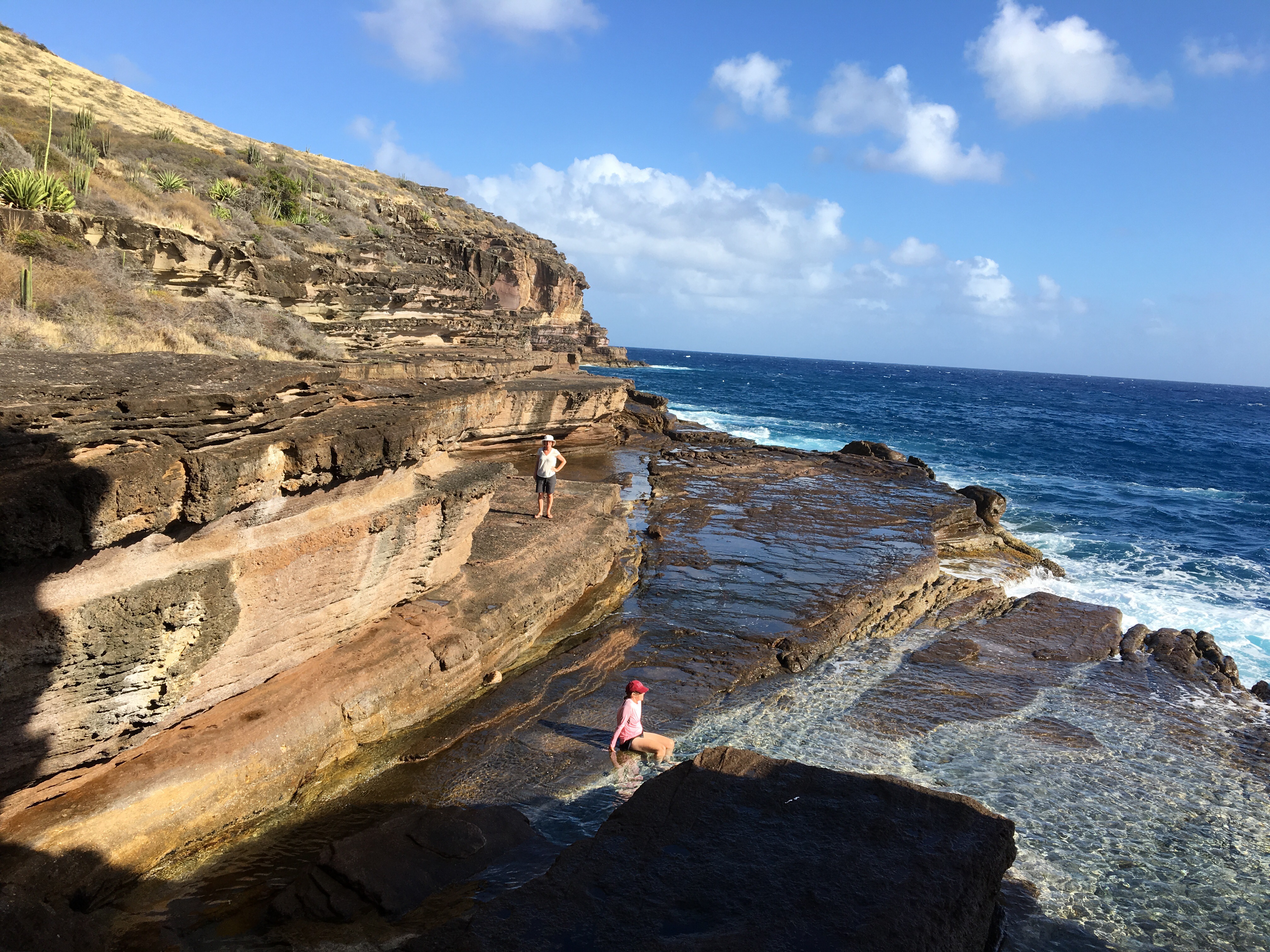 As we left the harbor, we called the kids up into the cockpit as we weren’t certain of the sea state and did NOT want this to be the moment that Quinn lost his sea legs. Lesson learned too many times that when they hang just a moment too long below while Madame Geneva heads to sea (even just a coastal move), it makes for an unshakeable queasiness that can simply be avoided by coming up. They nestled comfortably around the cockpit and watched as we passed Pigeon Beach and rounded straight upwind. Sails down, we began our motor east.

The clouds were still a bit thick in areas and the sea was a sharp steel blue. The waves were large but rolling. Initially we had pretty steady ten foot rollers, long and easy in the coming. Justin steered deftly up and over. As the waves grew, I felt we were flying. There was no banging yet, just a smooth dropping in that left you periodically and momentarily weightless. I sat on the starboard side with Quinn in my lap. Looking out over the other kids to the portside, I watched as the clouds cleared and the water bright blue sparkled in the sunlight. Still to the starboard, the sea was largely dark. The contrast was mesmerizing. 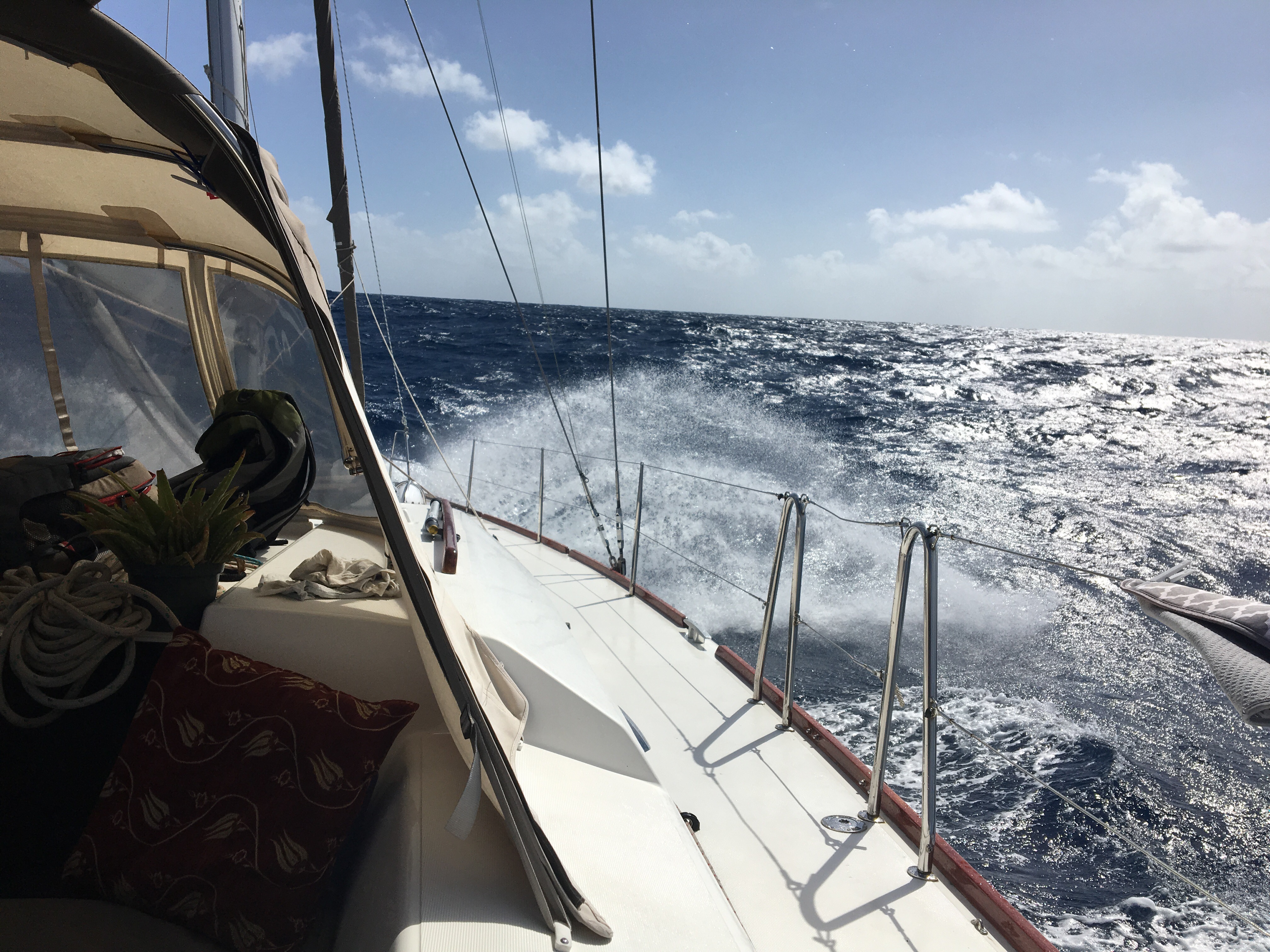 In the near distance, we spotted what we thought, oh yes it was, a rower…yes a rower. You see there is ALWAYS someone doing something that makes you feel downright suburban. This fellow just rowed across the Atlantic. The Atlantic. Remember too, that we spent the last couple weeks avoiding some rather salty weather. This man not only was rowing through this, he HAD to row as he had lost his rudder along the way.

Still the waves picked up height. How do you measure the sea while you are in it? You could take the approach that we lost sight of MOST of the mast of another boat as she was in the trough of the wave and we were riding up the crest. We can only guess that they were in twelve-fifteen foot waves with two-three foot wind chop on top. Justin continued an expert handling with only a couple of waves leaving us with a BANG. At one point, I quickly went below to grab a lovey for one of the kids. I found myself floating in the air for what seemed minutes before landing solidly back on my feet. Back in the cockpit, I sat with (on?) the kids.

[Captain’s note: these were without question the largest waves I have steered through to date. Not scared but cautious and careful. It was spectacular

It occurred to me that I was comfortable dropping into triple over head high waves on the bank in a 24,000 pound keelboat but would be terrified on a surfboard. As our Australian bartender Nick says, “no worries mate”.]

As we neared York Bank, the point of reference for the entrance to Nonsuch Bay, the waves began to move to our beam. It is quite one thing to see a wave coming toward you that you will ride over; it is rather another to need to navigate those towering waves as they seek to break along your side. Again, Justin maneuvered Madame Geneva with a combination of steering and speed. Che had chosen to sit on the starboard side (that which faced the incoming waves) and commented when he took on a large and fierce spray, “Well, at least I am not crowded!”
Still eyes got very wide, as we turned into our point of entry and the fifteen foot waves became rideable. Justin decelerated as we caught the waves that crested over the bimini and therefore we dropped in much more gracefully. The kids stayed low and as Gherty said, “I was a little scared but it was fun.” Che echoed, “It was kinda fun and kinda scary.” Quinn would rather have those moments back. They did great though. My pride for this crew and captain is immense.

At last, the waves settled and we worked our way around some rocks, beach and reef and into the still Nonsuch Bay. We anchored, dinghied in for lunch (a rather decadent one at the Nonsuch Bay Resort), and then returned to Madame Geneva where Justin inflated the kayaks for the kids. They paddled to shore and set off to explore the beach and the coast on their own. And I suspect, to tell some war stories…

Last night, we opened the hatches in the bow and peeked out to the crashing waves on the reef. The moon, full and bright, shone over the white caps in the near distance. How safe and surreal it seemed. How lucky to be where we are. 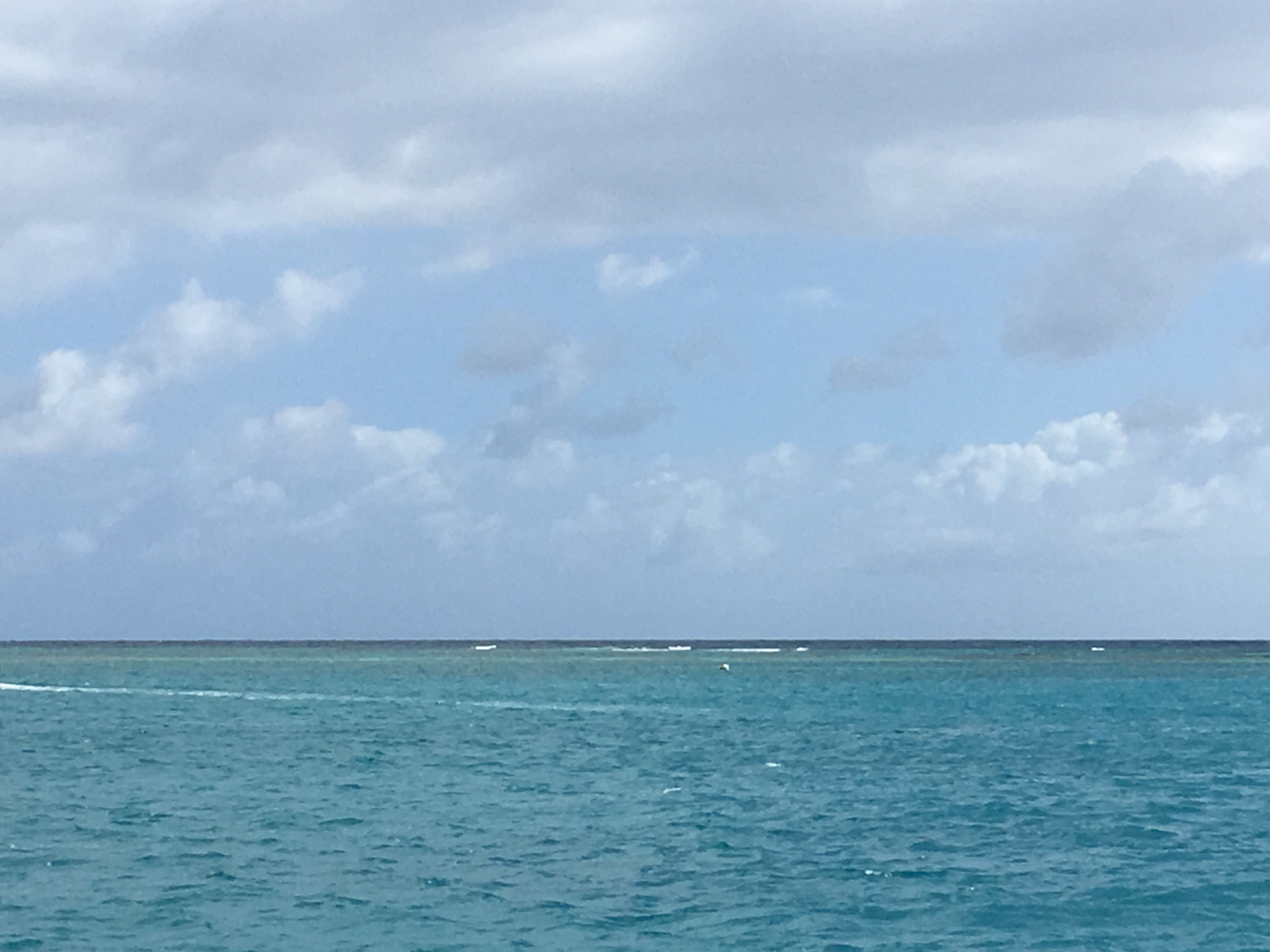