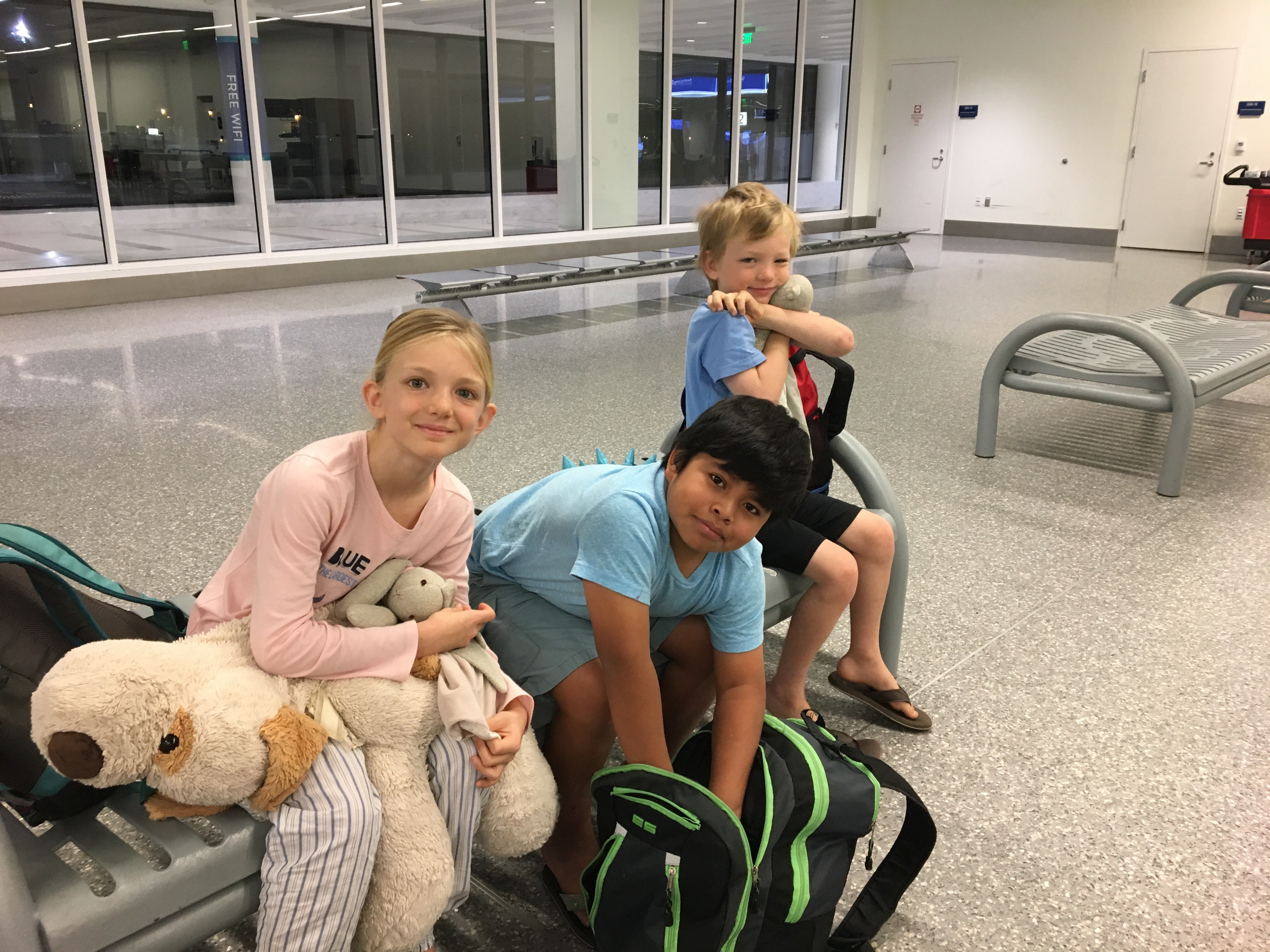 In a true Wallingian fashion, what started as an immersion in Puerto Rico with a departure in mid-January began instead as a diversion to the multi-cultural island of St. Martin/St. Maarten just last week. Truly, Justin did fly down to San Juan at the appointed time but his stay was rapid and filled with the technicalities of yachting and not the effortless grace to which the rest of the family subscribes.  Days prior to our planned departure to San Juan, we received word (long arrested from our various pings to the distant country of France, that began in October and were met with …) from the boat manufacturer that they were expecting us in St. Martin on Monday to make the final necessary warrantied repairs to Madame Geneva. You might well imagine our response, but it went something like this…uh, what?! Although from one island to the next is only a mere 150 miles, the issues with moving our family that 150 miles in a quick turn-around only to end up in the high season where we would need to find a place to stay while the boat was being repaired (and from experience it is never the ‘week’ it is supposed to be) are great and expensive. We instead negotiated that they would deliver MG and we would meet down there after the repairs were complete (AND smartly give a five day buffer to the forecasted ten day repair).

So Justin went solo to San Juan and Fajardo. I don’t even think he brought a change of clothes. He did however bring lots of provisions! Madame Geneva was still on the hard and thus Justin had to remind her that she was a sailboat. Canvas was brought back up, bimini stretched, solars on…I am sure there are other things to the technicalities of yachting but suffice to say Justin worked hard and long those three days in Puerto Rico. With exception to some minor issues, MG took her time out well. We did much right in getting her to that point…she was dry inside and didn’t smell for example (we had properly cleaned and emptied the plumbing lines, pickled the water maker, and filled the boat with various tubs of damprid). We did not, however, disconnect the starter battery. That is a costly mistake that I suspect we make just this once. Expensive lessons are not all bad. We now have jumper cables and a better idea of the separation of power. After splashing the lovely girl, Justin set about readying her for her passage.

Justin did find quite a few proposed stowaways. The portable vacuum came in handy in ridding our vessel of these guys. We had pantry moths once at home and they are rather determined in their right to life. Helpful hints to anyone who cares: vinegar, pantry moth traps and vacuum. Repeat for weeks.

Enter Benjamin. The contrast between Benjamin and Otto (remember Otto…the man who steered our boat come hell or high water to Fajardo all those months ago) is stark. Fortunately. Young, knowledgeable, and helpful, this delivery captain made all the necessary queries about Madame Geneva in preparation for the trip and provided useful tips and direction upon his arrival in St. Martin, including preemptively ordering a replacement impeller for our generator.

Our day of departure was quickly upon us. We spiced it up by needing to leave the house at 3:30 in the morning on Thursday. Of course, we received the call on Tuesday that the boat would not be ready on Friday as previously advised and they would need ‘at least another week’. We booked another hotel. Flexibility and positivity. We weren’t all too certain how our travelers would do with such an early wakeup but they surprised us with their excitement and overall resilience. As shipping boxes was not exactly an option (cost upwards of $350 per box), we loaded in three cardboard boxes as our checked baggage. Justin was super stoked. 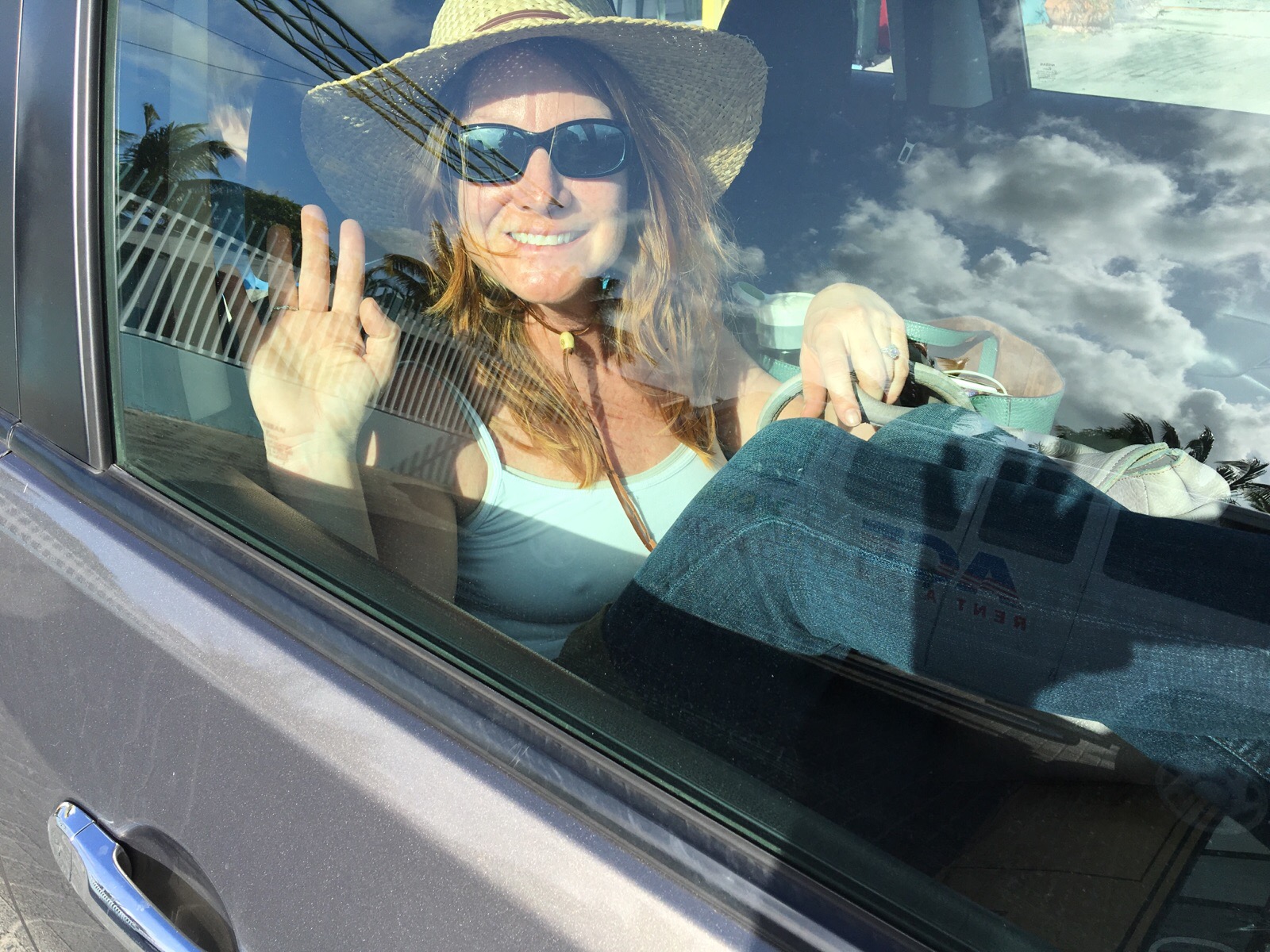 Our arrival in St. Martin was met with blue skies, warm weather and an overall friendliness. The kids (and the adults) all received passport stamps. We picked up our rental car and headed for hotel number one (only available for one night) just outside of Phillipsburg. Traffic is tight on the island; driving rules are more like practiced civility vs opportunism but seem to work well. We rounded circles and mountains and ended up in a seemingly seedy neighborhood. But here’s the thing: everyone was super nice and happy. Island time was in effect. We popped out for an early dinner and all fell asleep rather quickly upon arriving back at the hotel. The next day we packed up after a morning swim and headed for hotel number two. Along the drive, Che remarked how people seemed really happy even though they didn’t seem to have much money. Homeschool done.

​​When we sat done to lunch that day, Justin received the call that the boat was ready… “Now you’s can leave!” Of course, we were now booked at a nonrefundable resort for five days. Justin went to go check out Madame Geneva and discovered there were still some items to be addressed, which they are taking care of on Monday, so ‘ready’, like location, is relative. The boatyard owners are very helpful and have good workmanship so we are feeling good about these last details.

Yesterday, the family visited MG for the first time in months. We climbed on board and immediately the kids settled into reading and nestled in the piles of cushions/bedding that have yet to be rearranged. Even in her semi-disarray, she was home and although the resort has beaches, pools, and TV, Madame Geneva has a certain je ne sais quoi. “Why can’t we just stay here?” Soon come, kiddos. Soon come. 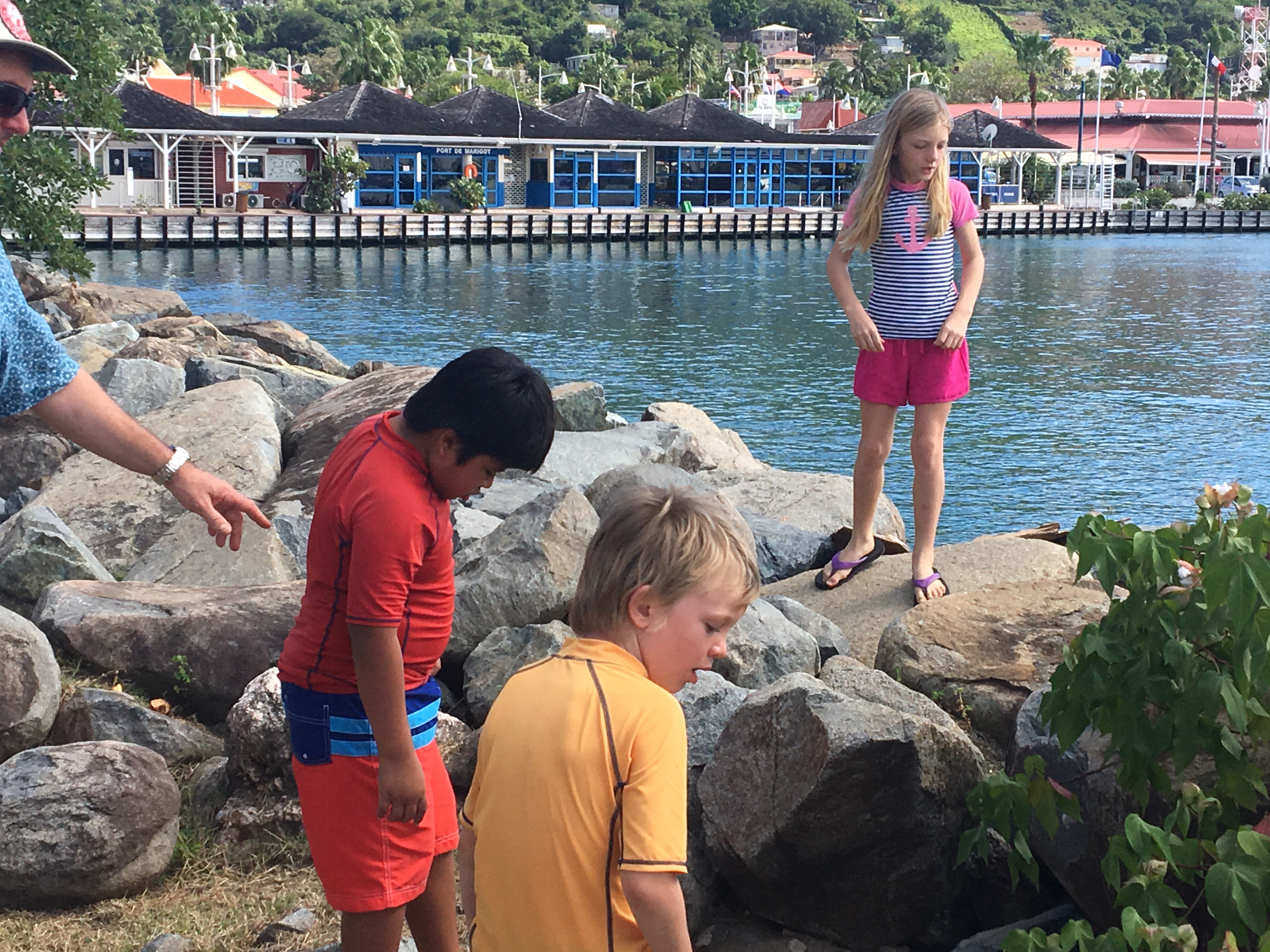 We headed into Marigot for lunch and had a lovely French experience. We walked over to Fort Louis Marina where we are hoping to dock for a couple of days to ready our boat for living aboard…our customer service rep will be available between noon and 2 today. The marina was bustling but upon our walk back to the car, the streets had become rather deserted. The market was broken down in that last hour; and the traffic thinned out. We drove further into French territory and ended up at Friar’s Bay.

The kids set to snorkeling and building sand castles, while topless women walked by. Families of seven or eight played by the rocks in the shade. The couple beside us had their bottle of wine chilled in a bucket. A long row of chairs and umbrellas offered comfort at a price (changed frequently depending who was requesting payment). A bar set back into the trees provided beverages, snacks and restrooms. A random white long horned steer meandered through the parking lot. I don’t think any of this was symbolic, except maybe the topless women.

Today though, we will act as Americans. The Super Bowl will not be ignored and I hear somewhere there is draft beer and wings. Two steps forward, one step back.