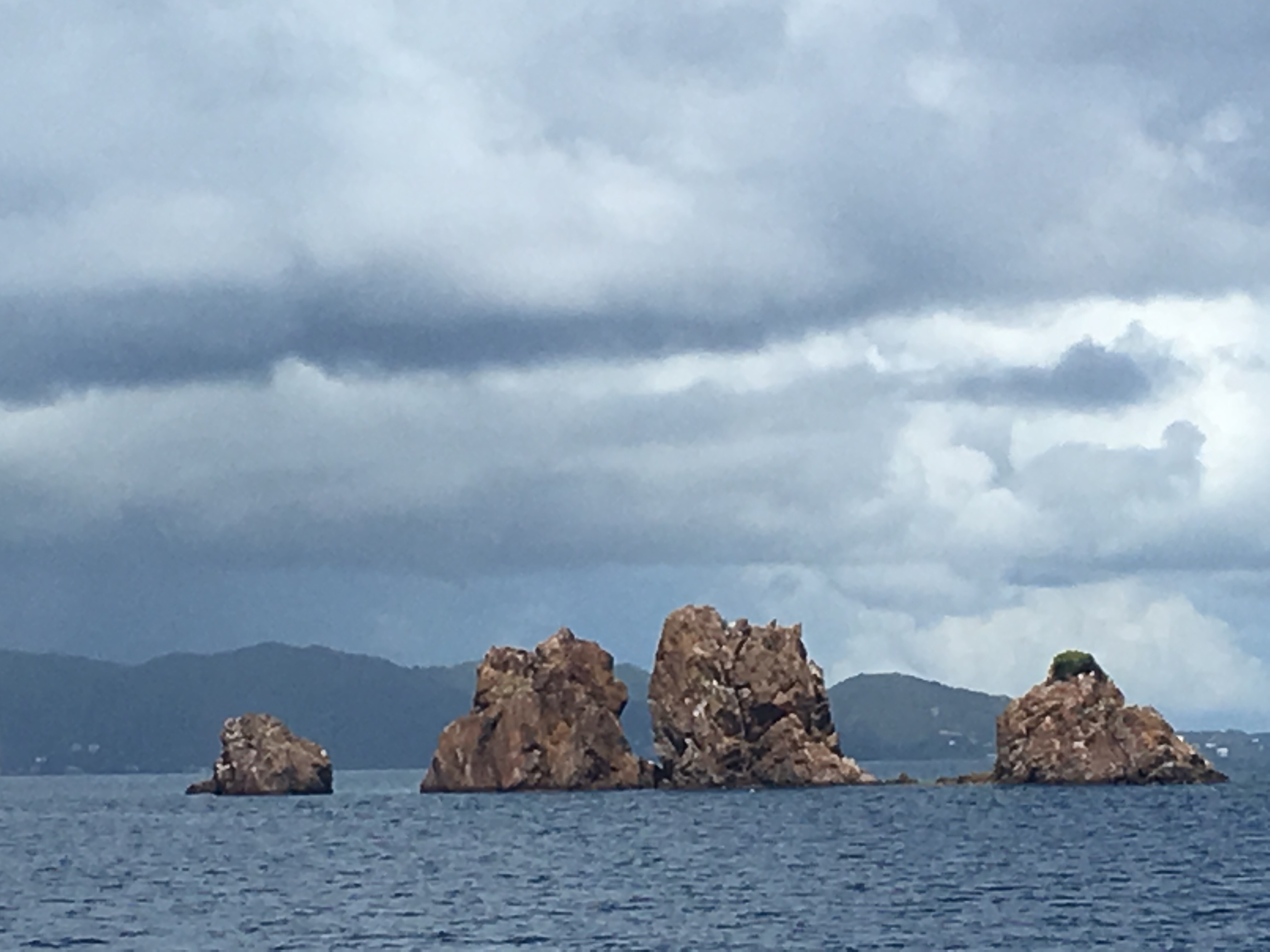 The British Virgin Islands are not for everyone.  You need a tough skin to get past a snide Customs, who may or may not grant you your requested thirty days, and who may or may not be serious when they tell you that you need to pay them fifty cents.  But once you get your passport stamps and the freedom that provides, the islands offer a great assortment of beauty.

As Justin wrote, my trip was interrupted with a quick jaunt back to Charleston.  It felt great to be back, if only for a short bit.  I lucked out by seeing my sisters, my brother, my dad and the OC girls, in addition to seeing the great crews running the restaurants back at home.  And I ate very, very well.  Only a taxi, ferry ride, plane, and uber away…and of course a couple of clearings in and out of Customs.

I returned to Tortola last Saturday and found Justin had moved the boat (and the children) to the top end of the island, Trellis Bay.  I taxied through the curvy roads, over small bridges and arrived at the Mongoose, where Justin was holding  his own at the bar and the kids were actively trying to climb a large trampoline out in the harbor.  The better part of an hour had them convinced of the worth of joined forces; the trio created a system of pulling and hoisting where only if the three worked together would they succeed.  No small amount of pride in that moment (not to worry, it was often offset with some truly horrible behavior later…). 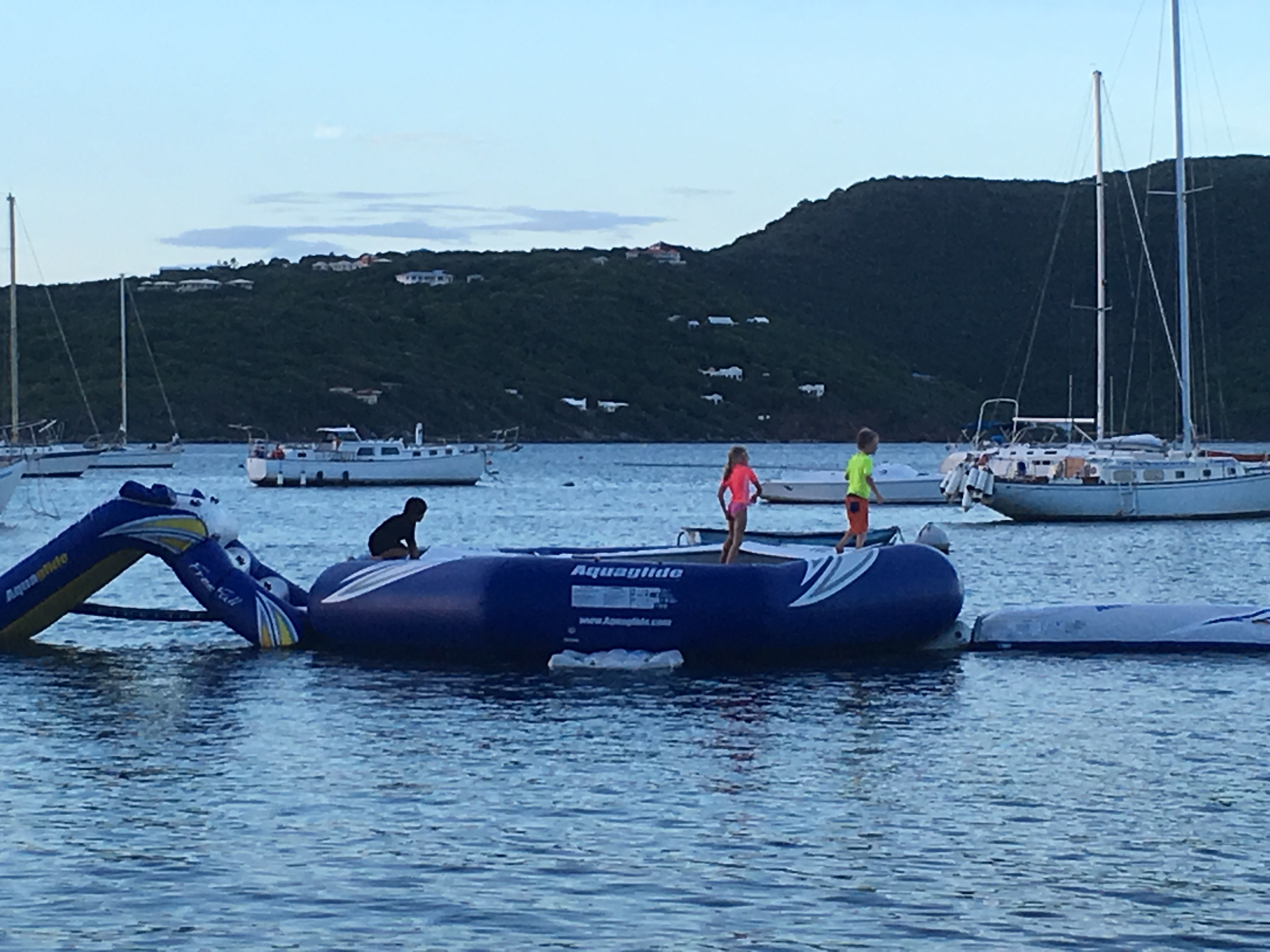 When I left, we had a fair amount of wash to do, including one load in the washer.  The good news is that that load got washed six  times; the bad news is Justin could not remove it from the washer.  So the next morning, we dedicated ourselves to that problem and found the cursed button in the drain line.  We also took apart and cleaned all the fans on the boat.  It is a curious thing about yachting that one can be surrounded by such beauty and yet up to the shoulders in muck. 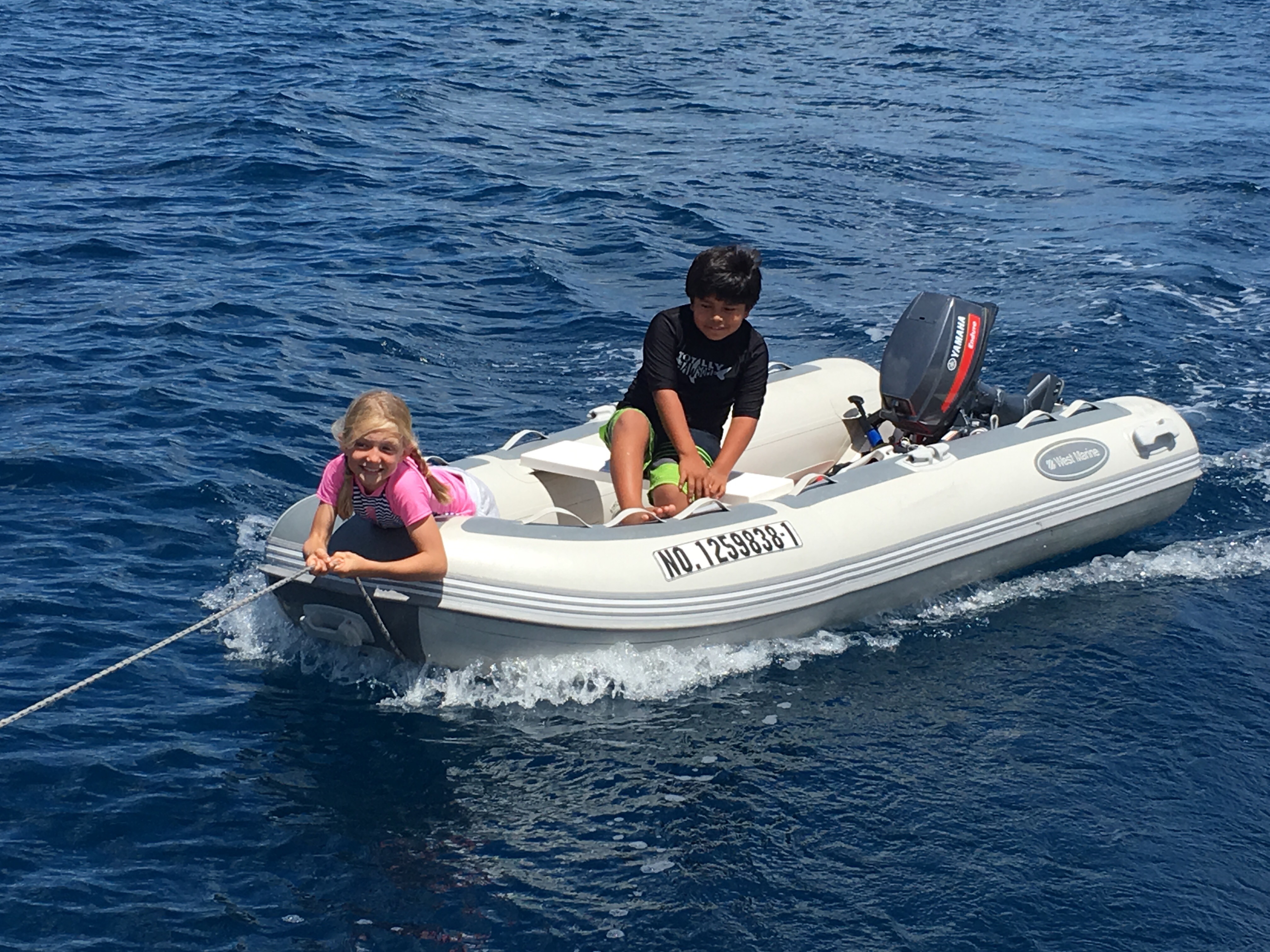 Trellis Bay had little going on as the season is very much off.  We opted to move on to Jost Van Dyke and check out Foxy’s. Jost for the fun of it.  And we got to sail. Beam reach, kite out, perfect conditions.  We passed Little Jost and Sandy Spit with its white beaches and lovely waters.  And we settled onto a mooring in Great Harbour.  After situating ourselves and taking a nice dive into the clear water, we took the dinghy to Foxy’s…and found it closed. 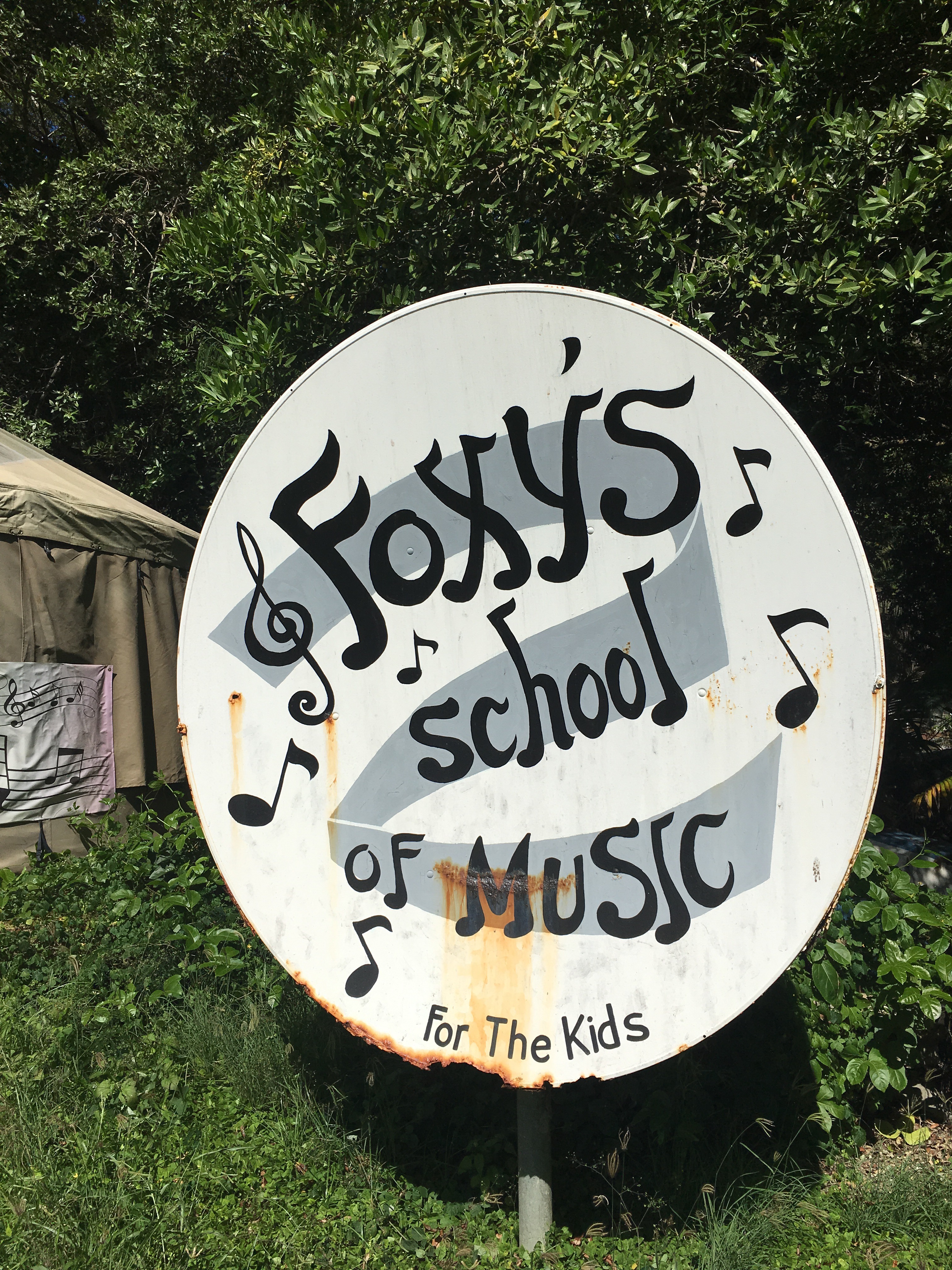 Luckily we met Ethan.  A new member of the Foxy family, Ethan was an enthusiastic tour guide of Foxy’s and the harbour itself.  We checked out the bar, including the private room and the new Foxy’s School of Music for Kids.  We missed Foxy but certainly felt well taken care of in his absence.  Ethan took us around the small village and back down along the beach.  We stopped at Rudy’s (a super well-kept grocery with outdoor seating) for drinks and then carried on back to Foxy’s.  Ethan’s new family included four stepsons; we invited Ethan and his wife, Jumilla, and whatever children they could round up (they brought two) to the boat.  A great evening of conversation, food, drink, and legos ensued.

The next day we carried on to White Bay, and to the Soggy Dollar.  The hammock and chairs were well received by Justin and me and the white sands by the kids.   Castles were built, worlds created, trees climbed, and sea grapes collected.  As the night approached, all the day trippers left and we were alone on the mooring.  We have found ourselves traveling completely out of sync with the season, and in good fortune thus far with the weather.  The rainy season has only meant a shower or storm once a day and blue skies and fair winds the rest of the time.

Our departure from Jost took us by the Bubbly Pools but given the stillness of the water, there was not much to explore there.  We opted for some snorkeling before returning to Nanny Cay to get our refrigeration checked into.  Apparently you can’t just stock freon…  Unfortunately that guy was on vacation.  Justin dove the sea cock and flushed the line…and well, it is not perfect but is working well enough for us to carry on for a week.

We set off for Norman Island on Thursday morning and moored at Pirates Bight, just between the Indians and the caves.  A dinghy ride to the caves provided us with the best snorkeling to date.  The kids surprised me with calling out the names of the reef fish they spotted.  Alongside the exterior of a large cave wall, we found a Moray eel hiding and then wiggling away.  The coral was vibrant, the fish equally so, the water clear, and the caves full of mystique.

This morning we snorkeled around the Indians, and then set off for the Baths in Virgin Gorda.   Tomorrow is Che’s birthday.  Ten years.  Sometimes it is truly hard to know if we doing the right thing out here.  But I suspect having a ten year old’s birthday in the Baths in Virgin Gorda is doing the right thing.  And maybe they don’t always realize it now.  Maybe their brother IS driving them crazy.  Maybe they don’t have enough ‘space’.  But they will realize it in moments and will better realize it when they are older, like maybe ten, how truly special this all is.