We got the call from Otto late on Saturday that he was stopping for fuel in San Juan and then continuing on to his final destination.  The radio silence that proceeded this call seemed irrelevant; we were heading east on Sunday, Justin’s birthday, to meet up with Madame Geneva!  He mentioned that the bow thruster wasn’t working and stated we could meet him sometime between his arrival at 1:30 in the morning and his departure at 6 in the morning.  For obvious reasons, we did not meet Otto.

Prior to departing our temporary home in Isabela, we visited quite a few more sites.  We toured the world’s largest radio telescope, climbed and peeked about the caves, and rode out some storms from our favorite perch above Jobos (drinks included). 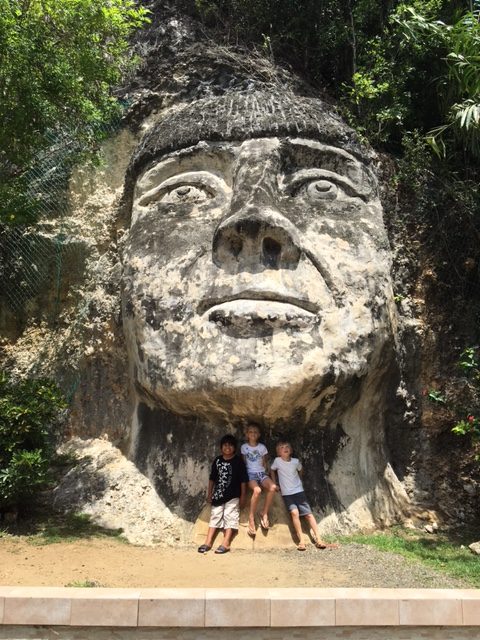 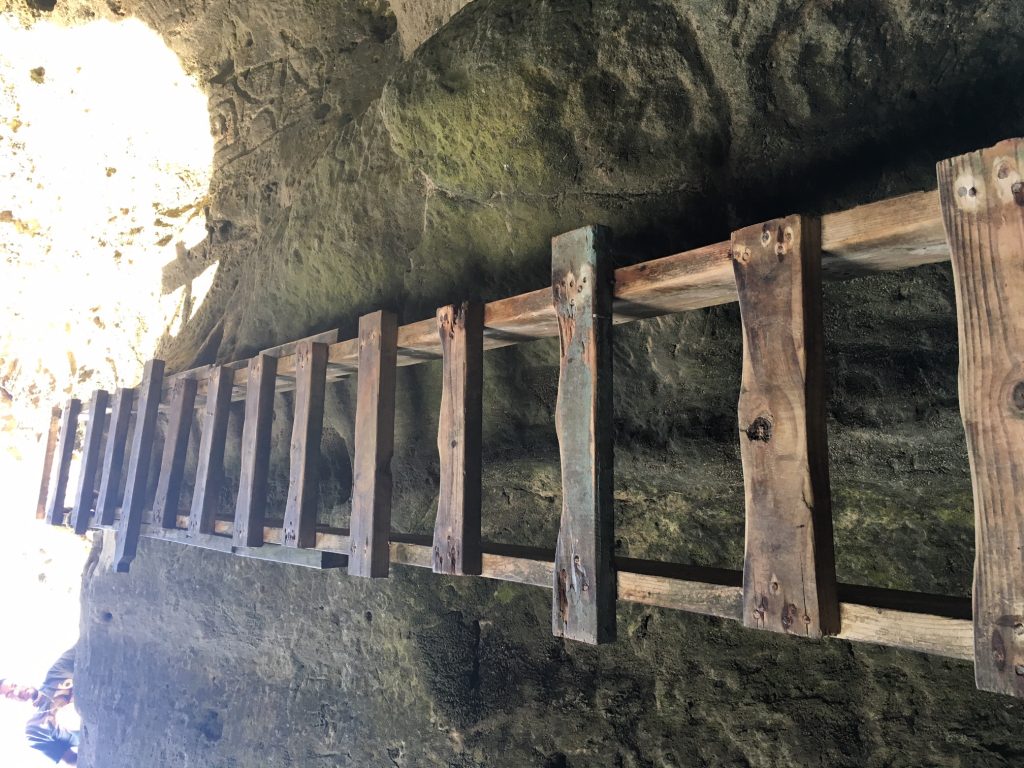 Ladder to the caves 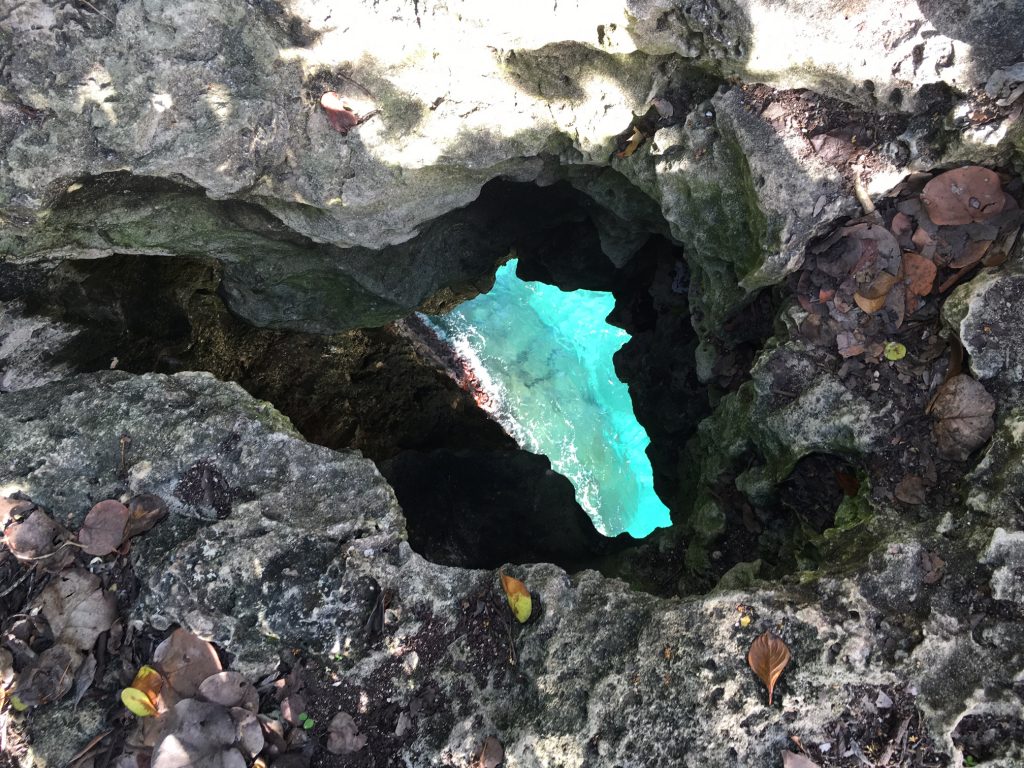 Holes and caves to sea 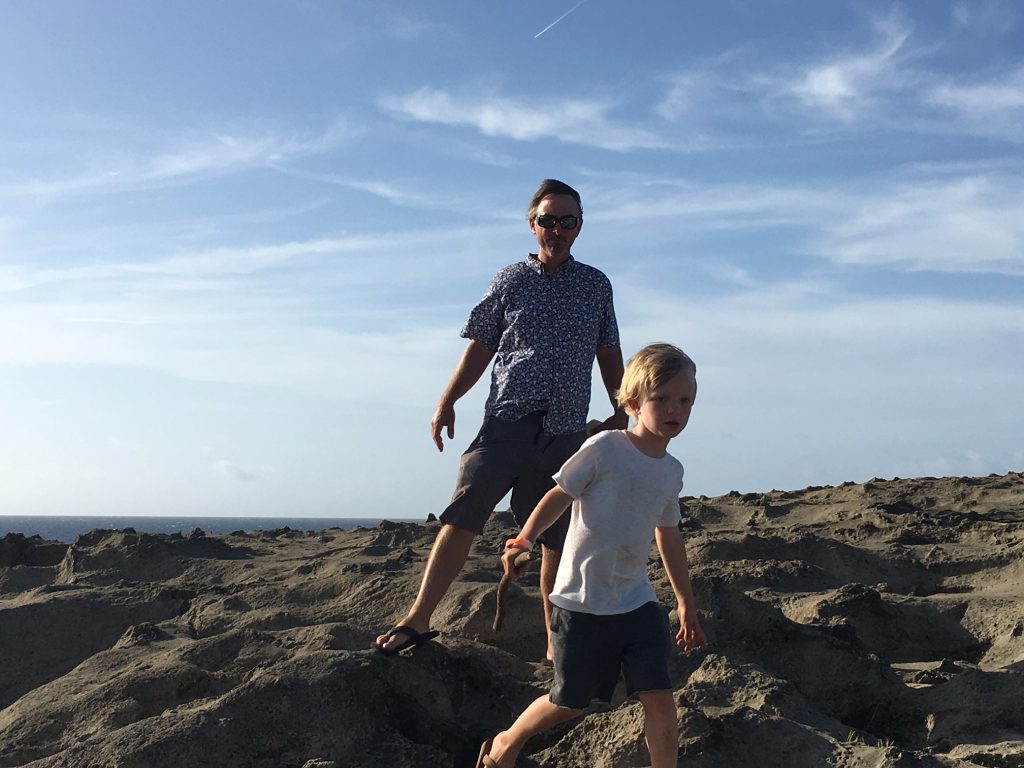 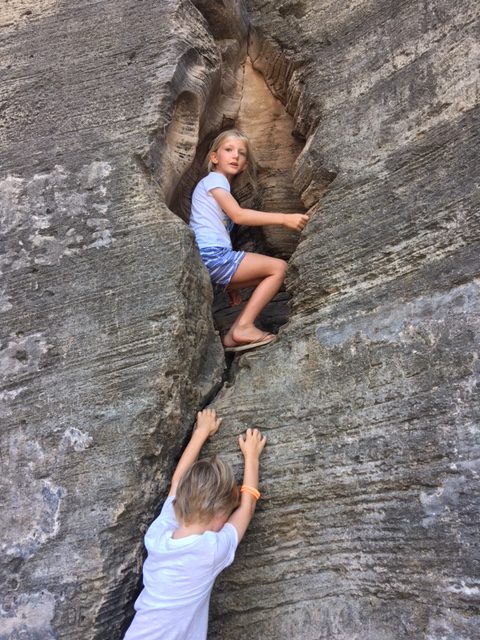 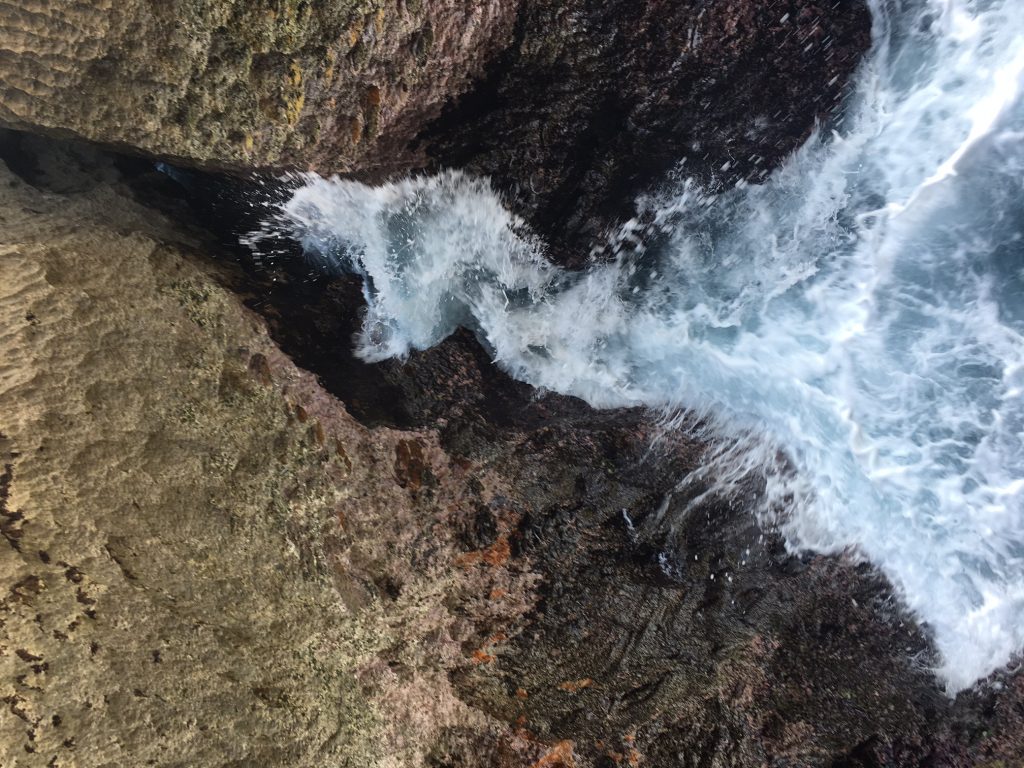 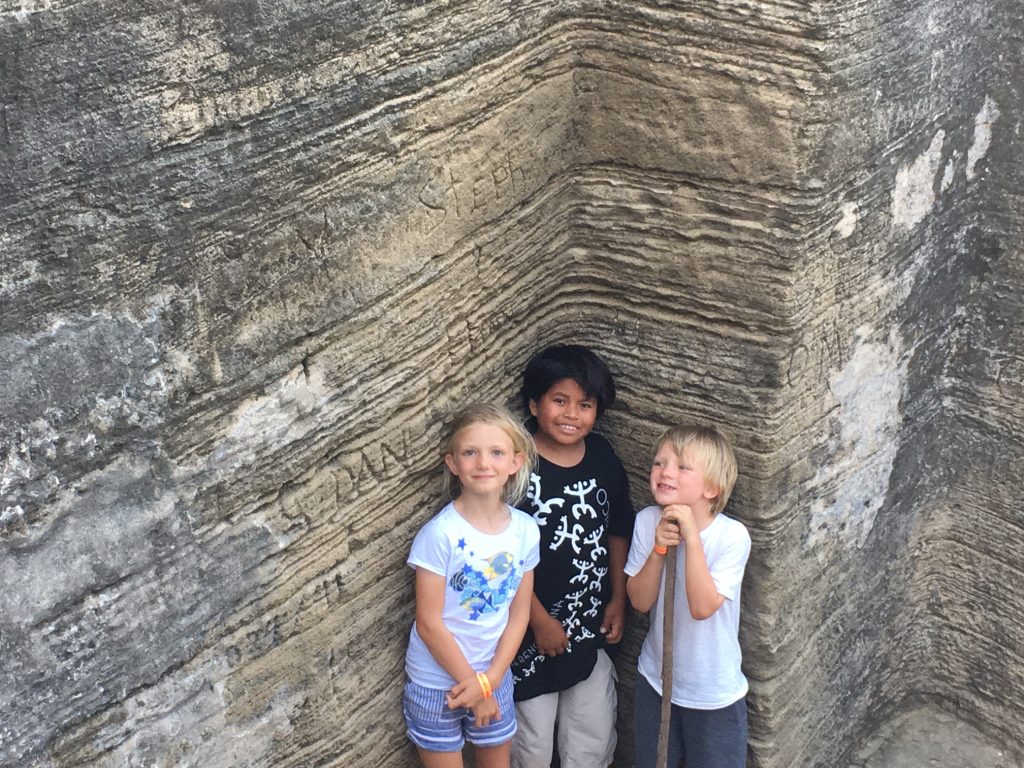 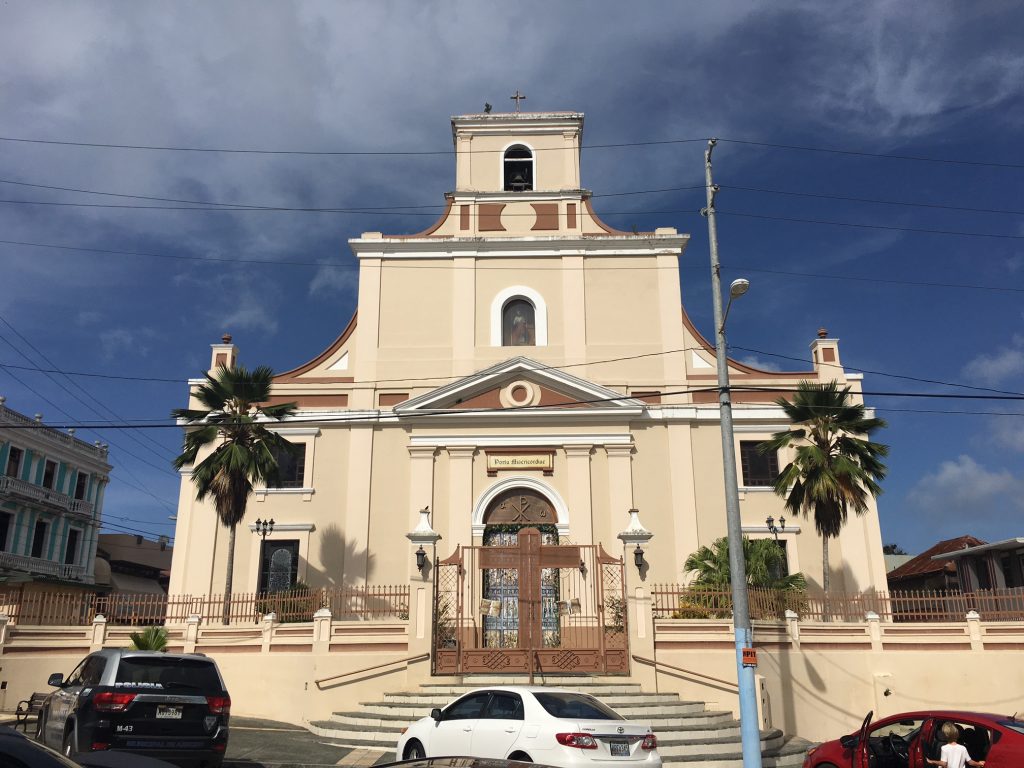 We took a scenic approach to the east, by way of south, on Sunday.  The oddity about this drive (and all these drives since switching rental cars) was that I was the driver.   Typically I am the navi-guesser, child wrangler, and general enthusiast but not only was Sunday Justin’s birthday, it was also the day his license expired.  His new one is somewhere en route but that info was not exactly sufficient for U-save car rental agency! So I had the helm for the winding passage across Puerto Rico!

The roads are narrow through the mountains and hills of PR…not Ireland narrow (come on, no one is THAT ridiculous!)…but skinny enough that hugging the tree lines ensures your safety with oncoming traffic about as much as screaming does when you fall out of a tree.  First the oncoming cars aren’t particularly worried about keeping to their side.  Second the cars behind you are pretty interested in getting you to go as fast as possible.  And lastly, the strategically (by strategic I mean buckshot) placed potholes vary in size but all are potential wormholes to another dimension.  I realize I sound like someone who spends most of her time in the passenger seat and am a white knuckled driver but I’d love to see an episode of Top Gear filmed here (but they should definitely bring the indestructible Toyota truck https://www.youtube.com/watch?v=xnWKz7Cthkk).

We arrived on the Caribbean side to drier hills, winds mills, and pale and bright turquoise seas.  The choppy deep Atlantic blue was so completely replaced with this sea.  We took the coastal road and wound our way to and around beautiful vistas, with Culebra and Vieques in sight.  We popped back on a toll road toward Fajardo…which was funny as the roads, while wider, were not exactly less bumpy!

We knew to expect the worse when going to see Madame Geneva but we had to move her.  Otto left our sailboat at the end of a T, unchecked, so when we called the marina, they were quite clear we needed to move her quickly!  Our plan was to get on, move her, and carry on with Justin’s celebration without worrying too much of what was needed to get her to be ours again.

And then we saw her.  She was dirty in a way that went beyond blushing and more toward notable disgust.  She crunched when you walked on her, lines salty, electrical cords tarred black and lying clumsily in the cockpit, canvas ripped, wirie cracked, fishing lines snapped, stackpack ripped and dodger connector shredded.  There was literally filth everywhere.  Down below was so distressing that I was frantically yelling at the kids to not touch ANYTHING.  Rotten food was scad about.  Wet towels tossed at random.  I was freaking out…I could barely look at Justin.  We focused on what we promised each other.  Move MG to the slip (luckily only 50 yards away).  We pulled in the cords and turned on the engine.

The engine was loud, seriously loud.  Justin had tossed lines and since we had no bow thruster (we tried some quick fixes but no luck) pushed MG off the dock.  He put engine in forward. Nothing.  Reverse.  Nothing. To say we were in a bad place is a bit of an understatement.  Finally the boat lurched forward and we quickly did some Hail Mary docking.  It was not graceful but we did it.  We tied her up and got off.

Several days since, most of which were with me being sicker than I have been in YEARS, and we have scrubbed the boat from bow to stern.  We thoroughly wiped down, sanitized, and washed EVERYTHING down below.   While we were doing this, we discovered the bilge pump was not working…and the boat caught on fire (the AC power cords and boat receptacle literally on fire…thankfully we were on board to say, “What is the plastic burning smell???!!).  And I forgot to mention that in Otto’s exuberance in San Juan he nearly lost the transom as the pin fell out and he lowered it…  AND that the generator came off the bolts during transit and ground down the battery cable (8 gauge) and various wires leading from the generator.  And the fridge wasn’t working. 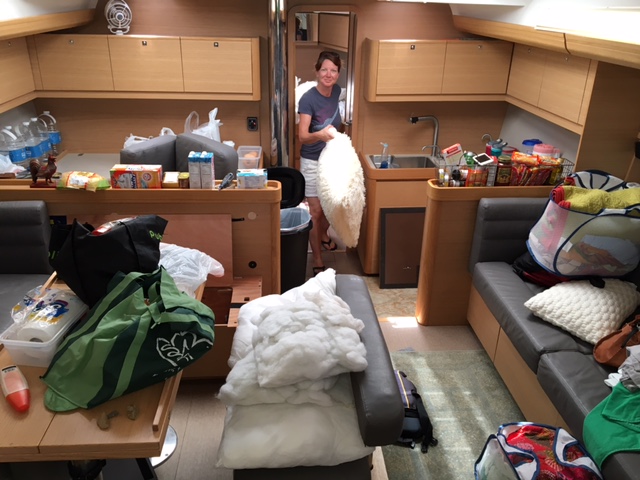 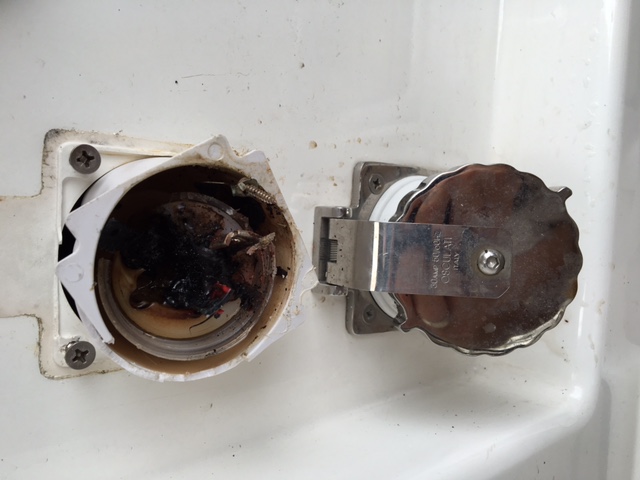 So what Justin fixed Solo (or with a tiny bit of help from me):  re-affixed the pin to the transom (now working; just needs gas strut-whereabouts unknown…possibly over the Atlantic), repaired and replaced the wires for the generator, repaired and replaced the shore power inlet and cords, and cleared the bilge pump lines and fixed the bilge pump itself.  We replaced the fuse for the wirie but alas that rather expensive and well-needed electronic needs to be repaired/replaced.  We have had great luck with wonderful vendors here in Fajardo and already have scheduled the canvas repairs, had the engine serviced (and learned a thing or two), the fridge repaired and are awaiting contact from the bow thruster service technicians.

And I feel much, much better.   Sitting here on Madame Geneva, the kids are playing legos, Justin and I are catching up on some work.  The boat is clean. Music is playing.   AND it’s Friday!